Microsoft Andromeda folding tablet would be an Android dream

I only initially thought of iOS when I first saw these renders because of the exploding color dust wallpaper. Apple’s used wallpapers like these in their standard iOS build, and the awesome look has invaded the whole mobile universe. An explosion of color is the perfect way to make a display-centric device look awesome.

Based on the patent blueprints this device worked with, the Microsoft Andromeda tablet looks a whole lot like a Nintendo 3DS. But this device isn’t limited to the relatively tiny set of displays Nintendo implemented. This device has more massive aspirations.

This device has a pair of displays which, when the device is folded flat, combine into one larger panel. This device can fold 360-degrees, which allows it to work in several different display modes. Folded all the way open, this device might work just like a standard smartphone.

NOTE: These images come from David Breyer. See the “This is Andromeda” link above for more information on the device as Microsoft leaks have informed us. 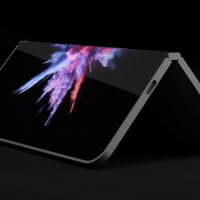 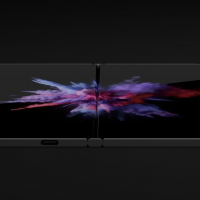 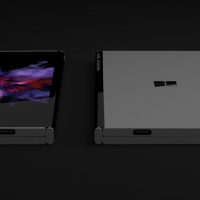 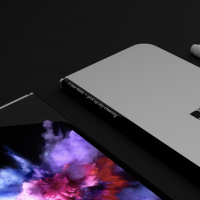 Folded all the way closed, just the edge of the device is visible as a display. With this edge of display showing and the rest of the display area protected with the exterior of the device, we’ve got a brand new way to utilize a mobile device. That tiny area could potentially show notifications without needing any other part of the display to be active.

SEE TOO: This is Galaxy X

This bit isn’t going to be of much use with the current version of Windows OS. This portion of the display would be sort of useless – unless you sit around waiting for software updates in your spare time. As such, I’d much rather see this device working with Android. If such a thing could be done, this would make a smartphone that was not only unique, but enticing, too!

Samsung, if you’re listening, this might be the best folding tablet yet. If you can do something similar, I’m totally onboard. If your folding Samsung Galaxy X is something completely different, I’m all up for that, too!