Microsoft has released a 3D printing app for Windows 8.1, bringing native support for producing physical objects from a variety of 3D printers to its OS. Building on the 3D printer driver MakerBot released earlier today, the Microsoft 3D Builder app comes with a wide range of preconfigured objects it can produce – including LEGO-style bricks, clips, and pendants, though also ranging to more complex designs like toy trains – but can also be used to create things from scratch.

Since that could be pretty complicated if you’ve never programmed a 3D printer before, Microsoft has added the ability to combine different presets into one larger object. That stacking or combining should make designing custom one-offs straightforward; there’s also obviously support for importing 3D object files made elsewhere. 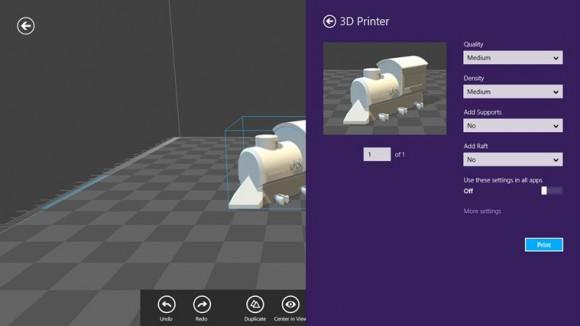 In fact, Microsoft is getting behind 3D printing in a big way. MakerBot’s Replicator 2 printer is being sold alongside Windows 8.1 PCs in Microsoft Stores, and earlier this year Microsoft-acquisition Nokia was showing off how the printers could be used to create custom cases for Lumia Windows Phones.

Microsoft says it is partnering with printer manufacturers including 3D Systems, Autodesk, Dassault Systemes, MakerBot, netfabb, Materialise, Stratasys, Tiertime (PP3DP), and others, though of that list only 3D Systems, MakerBot, and TierTime will have Windows 8.1 before the holidays. 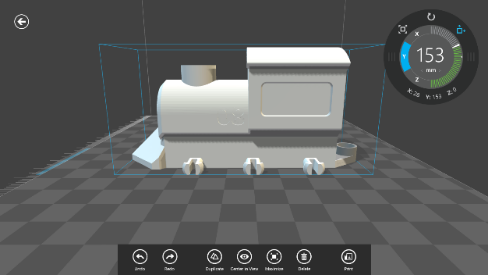 The 3D Builder app itself approaches the design process as you might expect from a 2D app like Photoshop, though of course you can rotate the preview around and see all the sides involved. It’s a free download, though you’ll need a 3D printer – or access to one – in order to actually see the fruits of your labors in the real world.

Still, the likelihood of that being a possibility is growing. MakerBot has already said it intends to put a 3D printer in every K-12 school across the US, while printing stalwart HP plans to enter the segment sometime in 2014.