It’s turning into a week of wearable computing, with Epson-partnered start-up Meta readying preorders for its true augmented reality headset. First revealed back in January, Meta offers a fully digitally-mediated view of the world – allowing for graphics, video, and text to be superimposed on real people and objects – rather than the Google Glass approach of floating a subdisplay in the corner of your eye. Sales for developers will kick off at 9am Pacific (noon Eastern) on Friday, May 17.

The current developer device, the Meta 1, is admittedly somewhat less aesthetically-pleasing than Google’s Explorer Edition of Glass. Epson has brought its Moverio BT-100 to the party, a headset which projects information onto both lenses rather than just one eye. It also has integrated WiFi, runs Android, and lasts for an estimated six hours on a full charge (it’s worth noting that the battery and processing is housed in an external box, which connects to the headset via a cable).

Onto that, Meta bolts a low-latency 3D camera which is used to track hand movements. Resolution down to individual fingertips is supported, and so complex gestures – like a “thumbs up” movement to “Like” a post on Facebook – can be recognized.

Just as per Google’s intentions with the Explorer Edition, Meta is hoping to leverage developer interest in preparation for a far more aesthetically-pleasing consumer version of its headset. That could eventually look like a regular pair of sunglasses, with the twin-camera array neatly slotted into the bridge. Whether that sort of design could also accommodate sufficient battery capacity for any meaningful period of use remains to be seen, however. 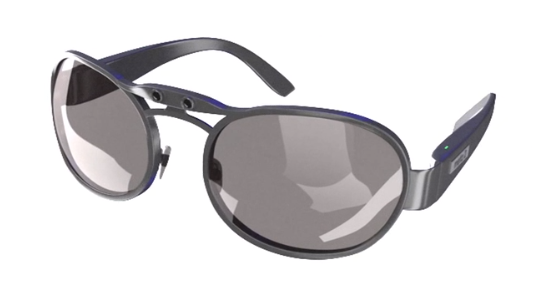 Meta is also yet to confirm how much the Meta 1 dev-kit will cost. The unmodified Moverio headset has a list price of $700 (though its street price is down to just $400), though of course that doesn’t take into account the added camera hardware, plus Meta’s external processing box and SDK. The first fifty dev orders will get a $200 discount, however, Meta revealed to pre-interest signups in an email this morning.

Google left its Glass discussion out of the opening I/O keynote, saving it for day two developer sessions where it showed off warranty-voiding Ubuntu installs and native app support with the Mirror API. However, it isn’t the only wearable we’ve been playing with this week. Recon Instruments brought along its Recon Jet headset, a sports-centric take on the concept, which is expected to begin shipping later in 2013.