A manned mission to Mars could take place within the next two decades, NASA and the private sector have agreed, though the race is on to research and fund such the next ambitious step fo the space race. The feasibility of such a mission – and the political, financial, technological, and social problems that would need to be addressed first – is on the agenda of the Humans to Mars (H2M) summit this week, with NASA staffers, researchers, private space agencies, and more all coming together at George Washington University to explore the practicalities of sending astronauts to Mars by the 2030s.

“A human mission to Mars is a priority” NASA chief Charles Bolden has committed, Discovery reports, though right now the agency can’t afford to do it all itself. Budgetary limitations, Bolden argues, mean the private and government agencies involved in space travel will have to effectively pool resources in order to get the most bang for their buck.

His strategy is to leave escaping Earth’s gravity well to private contractors, while NASA looks to the bigger picture such as getting from outside the atmosphere to Mars. Modules like SpaceX’s Dragon could be used to go from Earth to low-orbit he suggests, the Washington Post reports, while NASA works on taking the eventual crew further.

Firing a pod off to Mars isn’t quite as simple as, say, launching astronauts to the International Space Station. The 250-350m mile journey is not only long but puts humans at risk of high levels of radiation; once the crew reached Mars, if they wanted to land on it they’d need a safe way of decelerating since the planet’s thin atmosphere lacks the friction to brake a capsule. 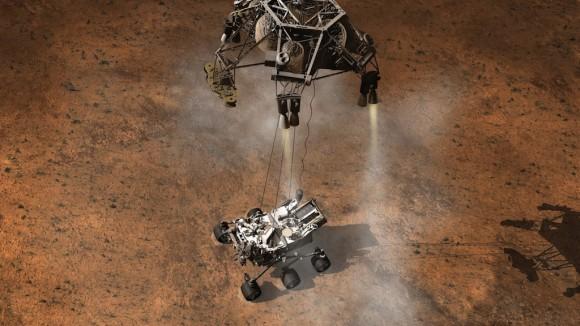 One possibility is the same sort of sky-crane system as NASA and the Jet Propulsion Lab used to deploy Curiosity, the robotic rover that has been drilling samples from the Martian surface. That effectively lowered the rover from beneath a hovering crane; however, the weights involved for a human crew and their kit would make it far more difficult.

In fact, the payload involved could be anywhere around 40x the weight of Curiosity, NASA associate administrator Michael Gazarik told the Post. Curiosity “was a metric ton” he highlights, “the size of a MINI Cooper.” Assuming the team wanted to escape from the Martian surface at some point, they would need to have a return rocket and fuel as well.

Back in 2010, the US government set out a goal to have a human mission “to orbit Mars” though not land on it. NASA’s ambitions go a little further, of course, though there’ll likely be robotic missions before humans even leave Earth in order to test the technology, not to mention private proposals.

H2M is run by a non-profit group, Explore Mars Inc., and co-sponsored by a number of aerospace companies including Lockheed Martin and Boeing. It will close on Wednesday with final speech by Buzz Aldrin, second man to walk on the moon.