Apple’s new Mac Pro may be a lesson in rethinking workstation component layouts, but wouldn’t it be better if you could actually see all that clever construction through a custom glass sleeve? Designer and 3D artist Martin Hajek thought so, and so cooked up some renders of the Mac Pro 2013 with its metal casing replaced, not only with glass – and reminiscent of the G4 Cube Steve Wozniak is so enamored with – but with perforated aluminum and even some sleek metallic finishes.

The new Mac Pro isn’t a stranger to tubular glass casings: after all, Apple used them to show off the pre-production hardware at WWDC 2013. In Hajek’s concepts, however, the glass sleeve is a lot more form-fitting, effectively replacing the glossy aluminum casing that Apple has designed.

Glass, of course, isn’t going to do much for the Mac Pro 2013’s cooling requirements. Apple has outfitted the new workstation with a single, large fan, that spins horizontally on top of the circular housing. That pulls cool air up, from the bottom of the Mac, and across the triangular “cooling stack” in the center, against which the two graphics cards and the mainboard are all fixed. 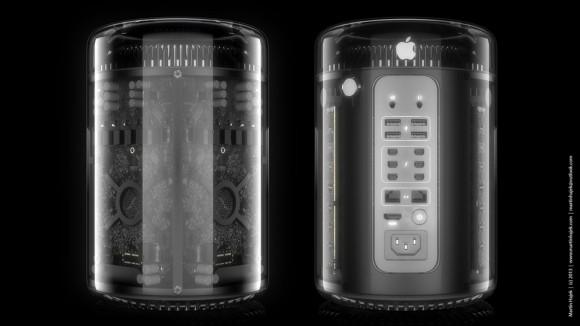 However, where aluminum would allow some of the heat to radiate out from the new Mac Pro, a glass case would act more like a thermos flask, trapping it inside. Given there are already questions from some quarters about whether the single fan will be enough to cool the Xenon E processor and dual-GPUs, it’s probably too much to ask for an effective aftermarket glass casing.

Still, most would probably agree that the Mac Pro looks pretty slick dressed in glass, at least before the dust bunnies move in. Hajek also has some more straightforward designs, including some colored anodized aluminum ones that we can imagine ColorWare delivering on.