Apple’s new Mac Pro 2013 isn’t due to hit shelves until later this year, but that hasn’t stopped the desktop from getting a preview at WWDC 2013. Long overdue an update, the new Mac Pro hasn’t held back, a significant departure from the aluminum tower of the current model, not to mention ramping up the specifications until this is the most powerful Mac to-date.

The circular, barrel-like design is likely to be polarizing. The old Mac Pro offered all the internal expansion possibilities that the iMac and Mac mini could never accommodate, but the 2013 Mac Pro approaches such matters of flexibility in a very different way.

Instead of internal SATA bays for extra drives, the new Mac Pro goes at it from a modular perspective. Six Thunderbolt 2 ports are each capable of handling six individual devices daisy-chained from them; that’s a total of thirty six peripherals – hard-drives, A/V interfaces, even 4K displays – that can be strung from the one compact desktop. 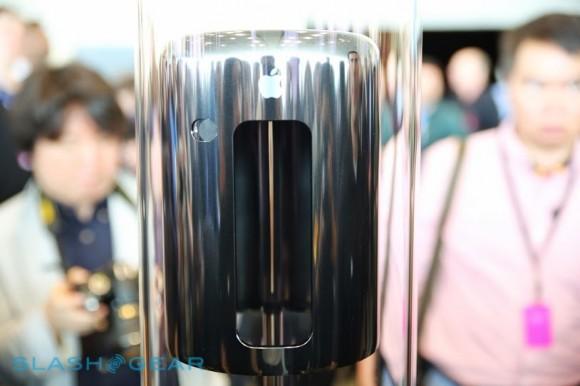 Also likely to divide opinion is the switch to flash-only storage. Just as on the MacBook Air and Retina MacBook Pro, Apple has dropped spinning-platter drives in favor of more compact, faster flash memory. The headline numbers are up to 1.25GBps read rates and up to 1.0GBps write rates, though just as we’ve seen on the Apple notebooks, it makes upgrading – at least internally – more difficult.

And yet, for all the potential headaches and changed perspectives when it comes to upgrades, we can’t help but be charmed by the new Mac Pro. The design has evolved from “another desktop” to something reminiscent of the unusual aesthetic of the old Power Mac G4 Cube. A completely different shape, of course, but approaching design in such an offbeat way that it’s eye-catching and engaging in a way a PC workstation seldom manages. 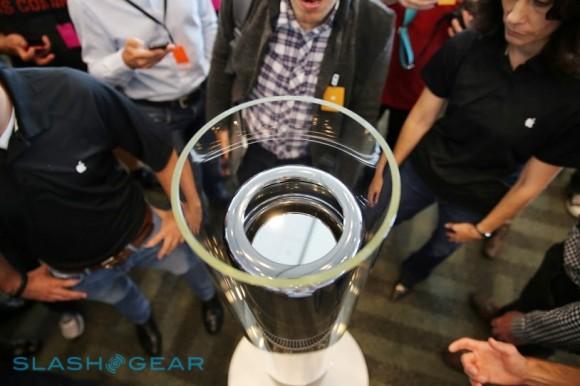 There’s plenty to be answered still about the Mac Pro 2013. How fast its meaty Xenon processor runs; how effective the dual ATI FirePro graphics are; how much of a compromise being so reliant on external expansion is; and – nowhere near least – how expensive the whole thing turns out to be. We’ll know more answers later in the year, when the new Mac Pro goes on sale.