During Ford’s Trend Conference at the company’s headquarters in Dearborn, Michigan, Apple co-founder Steve Wozniak sat in during a panel about driving distractions in vehicles and what solutions we could see in the future to limit these distractions in the car. Are touchscreens in the dashboard really the way to go? Do wearables like Google Glass cut down on distraction? We ended up getting to speak with Wozniak personally about in-vehicle technology, Google Glass, and even the new Mac Pro.

Wozniak says that touchscreens aren’t the best solution for in-car infotainment, but if they’re implemented properly, they still could be a valuable piece of technology in the car. For instance, Wozniak says that the problem with touchscreens is that “it’s hard to find the right button to press without reaching over and taking your eyes off the road,” but if companies made the touch buttons larger (therefore, easier to press), there’s less of a chance of hitting the wrong button and taking your eyes off the road even further. He’s says that “it’s easy to hit the buttons on a phone because you’re holding it; when you’re not holding it and it’s on a dashboard, it’s so hard to tap and hit the right buttons.”

“The ergonomics of your body can give you a lot of guidance without having to look at a button; you can feel which is the right button on a steering wheel, down below to get the menus. I much prefer that to a screen where you have to divert your eye and your attention to hit a button, and if you miss you try again.” – Steve Wozniak

The Apple co-founder highly prefers physical controls, especially those which are “ergonomic to the body,” like buttons on the steering wheel that you can easily reach without taking either of your hands off the steering wheel. Of course, most vehicles already have these types of physical buttons, especially the newer ones, but as touchscreens are becoming cheaper, more and more car companies are moving towards a single touchscreen for most or all of the car’s controls. This is obviously a cheaper option and can save companies money, but Wozniak says it comes at the expense of driver safety. 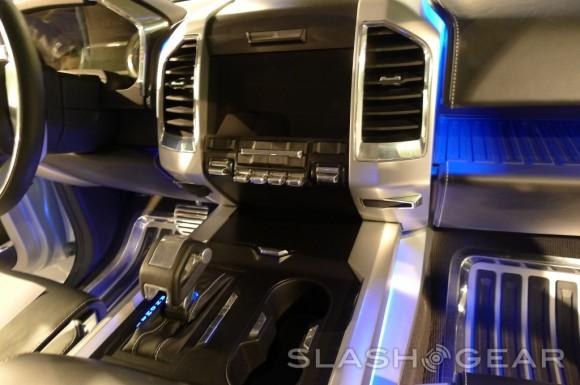 “Obviously displays presenting information, with some of the bright OLEDs, are a beautiful way to see a lot of useful information. And they can have touch on them, but it’s always nice if you have good ergonomic controls without having to do the screen touching,” Wozniak explains. “Or, when you have to touch the screen, the buttons are very, very big, and you’re not going to make a mistake and hit the wrong thing.”

[aquote]All-touch dashboards bother me: just to save a little money.[/aquote]

“So yes, they can co-exist, but sometimes you don’t have a choice because sometimes the least expensive way is to have one touchscreen and nothing else, and people who want to go that way, skip a lot of the ergonomic controls – the ones you can feel where they are, and know what you’re doing, and that bothers me, just to save a little money.”

After shifting toward touch controls with previous versions of its infomatics systems, Ford has seemingly reached a similar conclusion. The company recently announced that it would be bringing back physical controls in cars, after feedback that touchscreens alone were simply too distracting for drivers.

As for Google Glass, Wozniak says that it could be a better option than a dashboard touchscreen, since the Glass screen is “like a heads-up display” that’s in the driver’s line-of-sight. However, it can still be a distraction since you have to take focus off of the road to look at the Google Glass display.

“Your eye can really be very much on the road, the conditions ahead of you, though not 100-percent” he cautioned. “You could use that display and get yourself in trouble, so I would have to drive a car and try it.”

That willingness to experiment has already seen Wozniak try some more unusual tactics behind the wheel. “Of course, I’m kinda weird,” he conceded. “One time I put on prism glasses – the glasses where you lie back in bed and watch TV – and I drove down my street like this [mimes lying back in the seat].” Still, he was quick to point out, “that’s like [in] a little street in the mountains, with no cars!”

During the panel discussion, Wozniak discussed voice commands in cars, and says that it still needs improvement. Specifically, he notes that there’s too many steps to go through when wanting to complete certain tasks, such as saying “Find theaters near me,” then “navigate to [a theater].”

Other tasks can have even more voice commands, but Wozniak says that drivers should simply be able to say something like, “I want to go see Iron Man 3,” and have the navigation system automatically find the nearest theater and start turn-by-turn navigation without any further input. 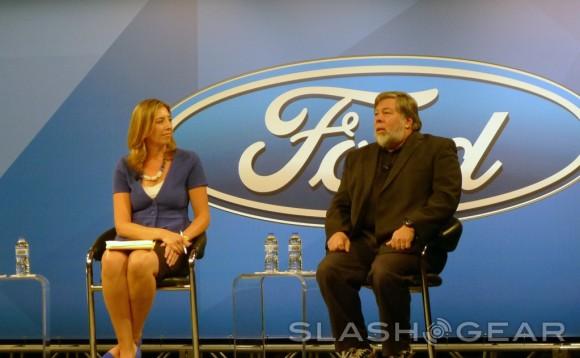 Essentially, Wozniak notes, “the fewer steps involved, the better.” This seems obvious, but he points out that in fact many people fail to realize that tasks could be so much simpler than what they currently are. He also talked about putting Google Now-like technology in the car, so when you take off from a location, your car will automatically bring up directions without the driver even having to interface with the navigation system at all.

Overall, Wozniak seemed pretty frustrated at the current state of in-car technology. His overall message? “They should just kill the people that brought us computers.”

When speaking with Wozniak about iOS 7, he says he hasn’t tried it yet, but notes that it looked “very beautiful” when it was presented at WWDC 2013. He also singles out Apple’s AirDrop feature in the new iOS version, comparing it to Samsung’s Bump where you can share files with other users within the ecosystem instantly. Wozniak didn’t seem too impressed with AirDrop, however, and says that he doesn’t “necessarily think Apple does everything the best.” 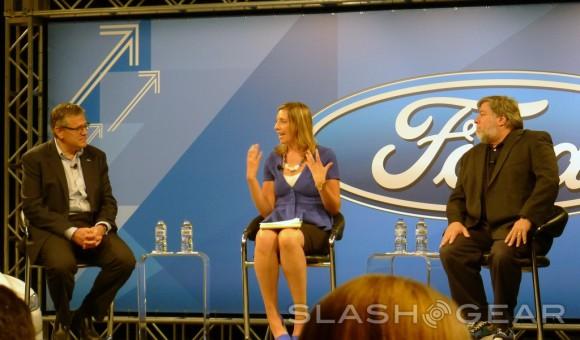 In some one-to-one time, we asked the Apple co-founder what he thought of the new Mac Pro also shown at WWDC, and in particular its design. Wozniak told us that he really likes the drastic change in aesthetic, and that it reminds him of the older Power Mac G4 Cube, which also sported a smaller form-factor like the 2013 Mac Pro.

As for his much-commented-on expression during the keynote when the Mac Pro was being detailed, there have been suggestions that he looked less than impressed, but he argues that people are mistaken. The look on his face during the applause while everyone else was clapping, he says, was simply him “just thinking”. Unlike a lot of people, he pointed out, Wozniak prefers to carefully evaluate products and situations first before arriving at a conclusion, so as to not make a rash opinion. In fact, he was mentally comparing the Mac Pro to HP’s workstations, which he believes are now the best on the market.

“I get off into thinking about things. I saw the Mac Pro – and I’m very familiar with workstations – Apple used to own that market, for things like Final Cut Pro, and now HP owns the market. And I have seen HP, their machines, the engineering of them; y’know, you can take two hours to replace a hard disk inside an iMac, [HP] has one which looks like an iMac, you just tilt it, press one button, it opens and you pull out the hard disk. Six seconds. It’s the engineering quality and level. They have the highest level of the Xeon processors; the highest level of the NAND memory cards for them; and graphics, the highest level graphics processors. So in that market, I was trying to decide, is this machine going to be as good, and as capable as, say, at least a low-level HP, or maybe a mid-level one.” – Steve Wozniak

His rational thinking is a smart move, given the internet can be filled with all sorts of rash opinions. Now that he’s had a chance to reflect, Wozniak says that the smaller design and the unique look of the new Mac Pro is a game-changer, and he “hopes it goes big.” Nonetheless, it’s not likely to oust the beloved Cube from his heart, and neither will he give a standing ovation simply because the new Pro has an Apple logo.

“The Cube is one of the biggest heart-felt memories of my life, and [the new Mac Pro] reminded me of the Cube. I was probably off thinking about something; people have sent me that picture and I’m just looking at it, and I’m not applauding. Sometimes, when I’m thinking, I’m not applauding because it depends on what the statement that was made right then,” he concluded. “I don’t just applaud at just everything that says ‘it’s time to applaud.’ It’s got to be the right point.”