What with apps, smart speakers, and smart displays, it feels sometimes like the connected home forgot about how useful a simple button can be. Lutron’s Aurora always-ready smart bulb dimmer is a $40 fix for a thoroughly first-world problem, but don’t let that put you off. If you’re a Philips Hue user, Aurora may very well be the answer to your prayers.

Connected bulbs are one of the easiest ways to get a taste of the smart home, but they can also be one of the most frustrating. Since you need to leave the existing switch turned on – so that the smart bulb remains connected – all it takes is someone flipping that off and your clever lighting goes offline. A piece of tape or a strongly-worded Post-It can help avoid that, but it neither looks great nor aids in convincing people that they should use an app to adjust the lights. 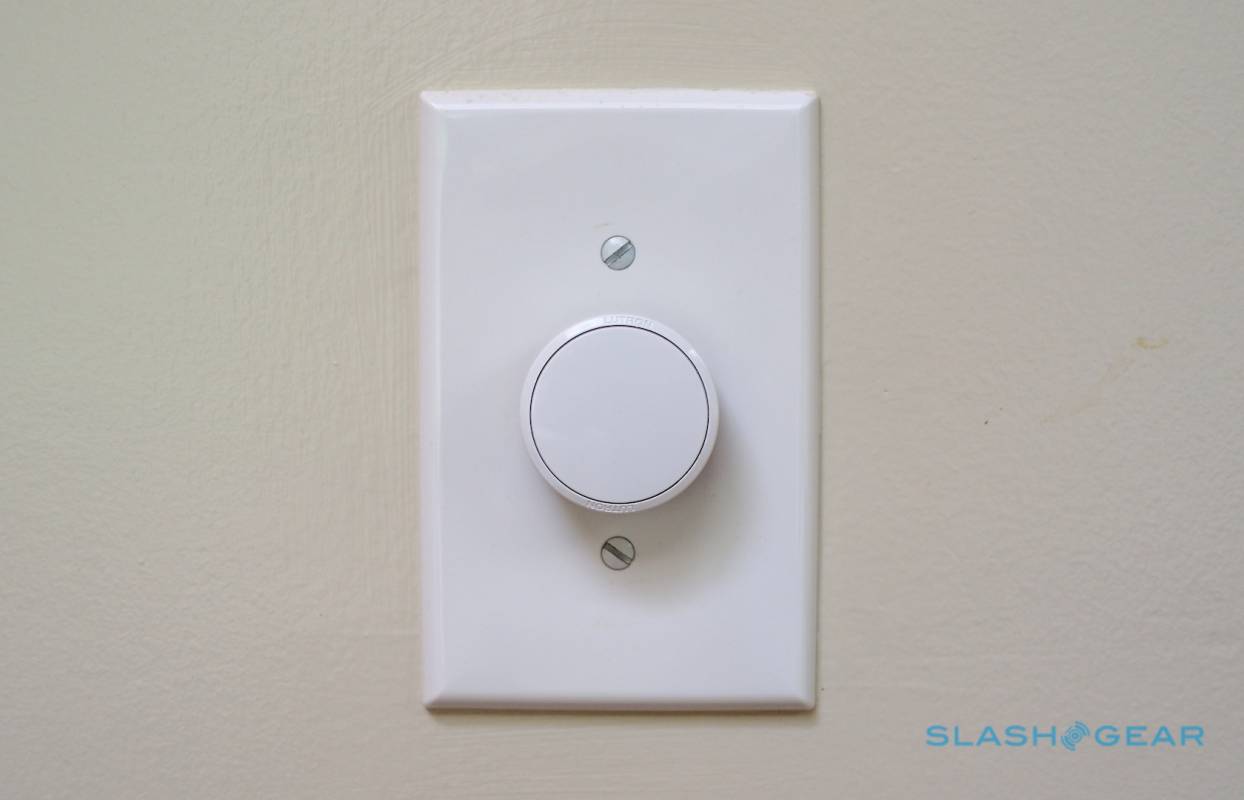 Lutron Aurora installation and use

Enter Lutron’s Aurora. It tackles two problems in one: not only controlling your lights, but preventing the underlying switch from being inadvertently turned off. A simple bracket screws into place on the toggle switch itself, onto which the knob clicks. Pressing the knob turns the lights on or off; rotating it adjusts brightness, just as you’d expect. 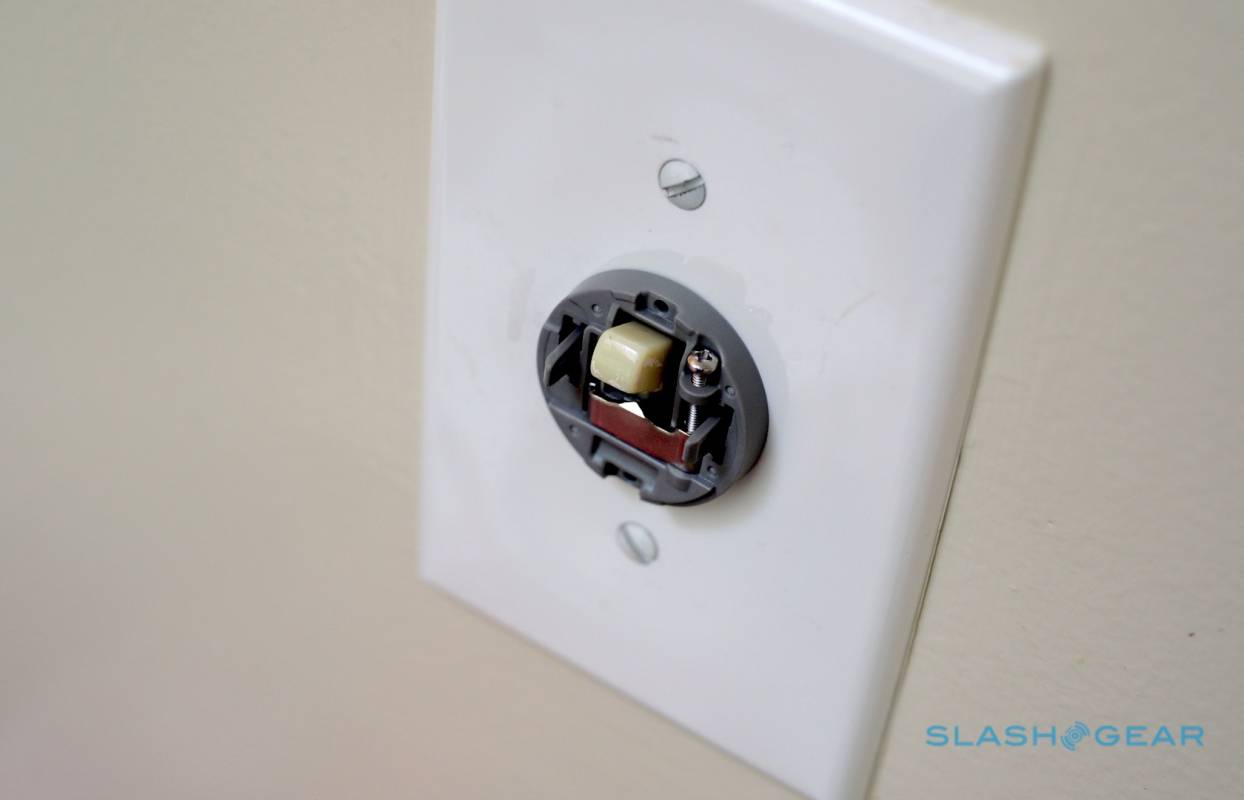 If you’re a keen Hue user you’ve probably got a Hue Bridge set up. The Aurora can connect to that – as long as it’s the square, second-generation version – and then be mapped in the app to control different rooms or up to 50 individual lights. Alternatively, if you’re just getting started, you can pair the knob to up to twelve Hue bulbs directly. You do get a smaller range of controls in that situation however.

As it uses Zigbee 3.0, in theory it should work with other smart bulbs that use the same wireless standard. Lutron says it’s working on compatibility testing there. Right now, though, it’s Hue only – you can’t have the knob control your smart blinds, for instance, or any other connected device. 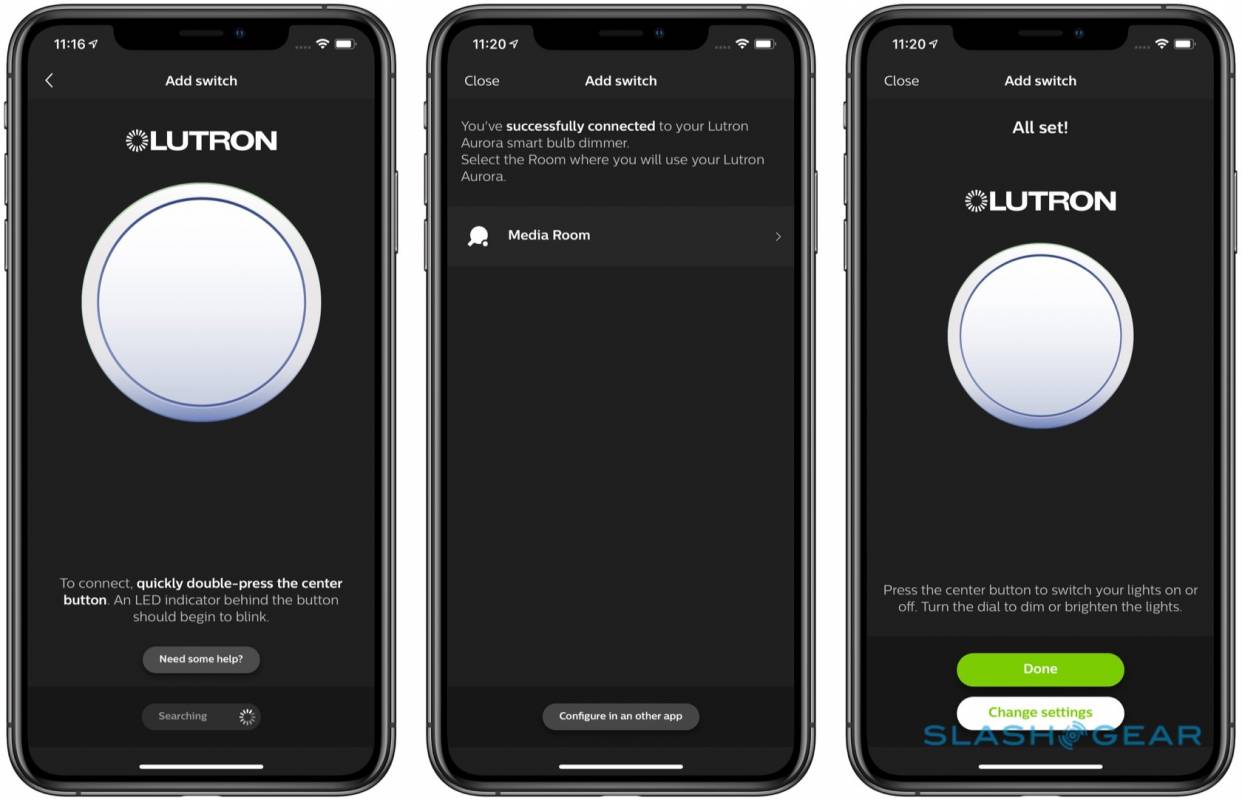 It’s worth noting that, since it’s only using the underlying switch as a mounting bracket rather than physically throwing it, the lights the Aurora is paired with don’t need to be those the switch itself controls. What I’d have liked to have seen was a non-switch mounting option, such as a sticky pad, for more flexible positioning. Another issue would be if you have the flat-style switches, which Lutron’s mount won’t work with.

Assuming none of those hurdles apply, living with the Aurora is admirably straightforward. It’s easy and familiar enough that people don’t realize they’re interacting with smart lights in the first place, but the programing options are nicely flexible. You can have it trigger a specific color scene or light recipe, for example, or simply resume whatever the previous light state was. 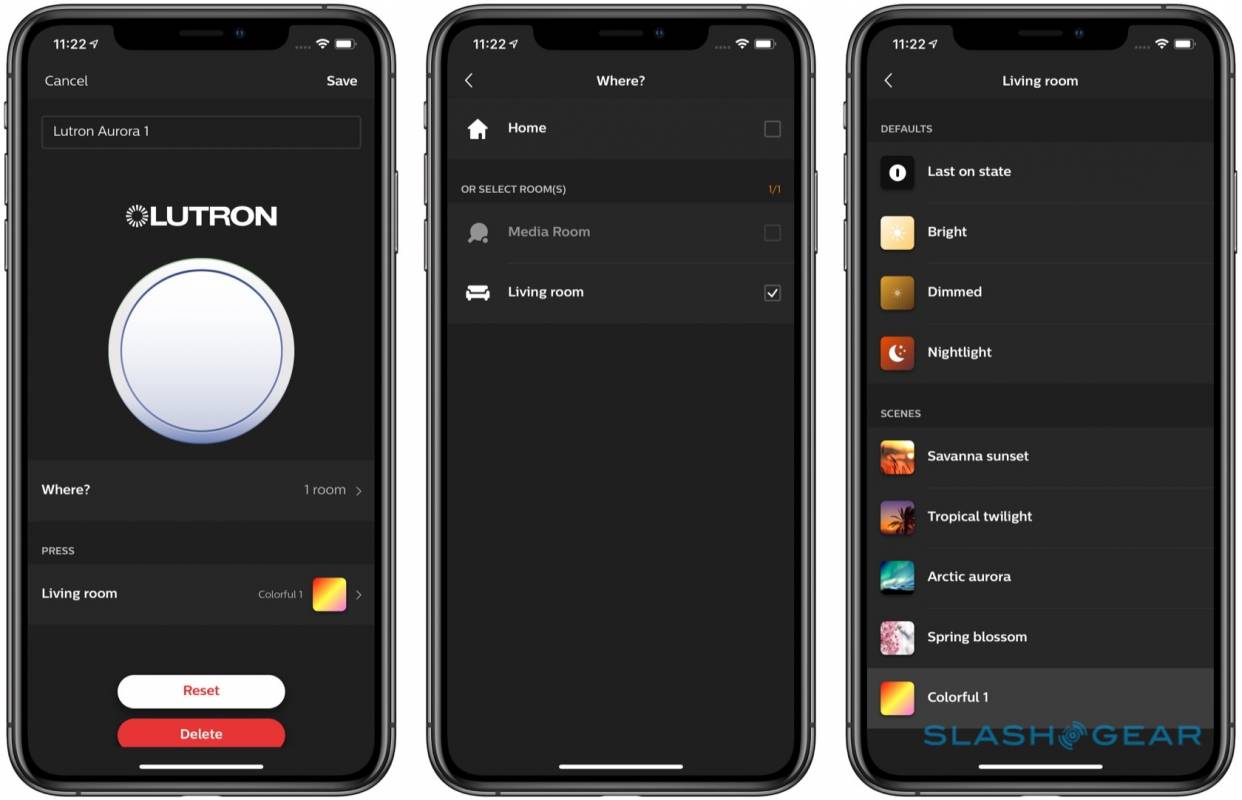 Really, though, the idea is that you set and forget. Lutron says the CR 2032 battery should last for around three years of typical use; an LED under the button will blink red when it needs replacing.

Lutron doesn’t have the smart switch space to itself. There are several connected switches already out there, and with prices from around $25 apiece they undercut the Aurora too. Their main downside, though, is that they require more comprehensive installation.

That typically means shutting off the power, removing an existing switch from the wall, and then replacing it with the smart switch. If you’re not DIY-savvy, or aren’t allowed to make those modifications because you rent your home, that might be a dealbreaker from the get-go. Even if you do have that flexibility, the options to replace a multi-switch panel with a smart version are limited. 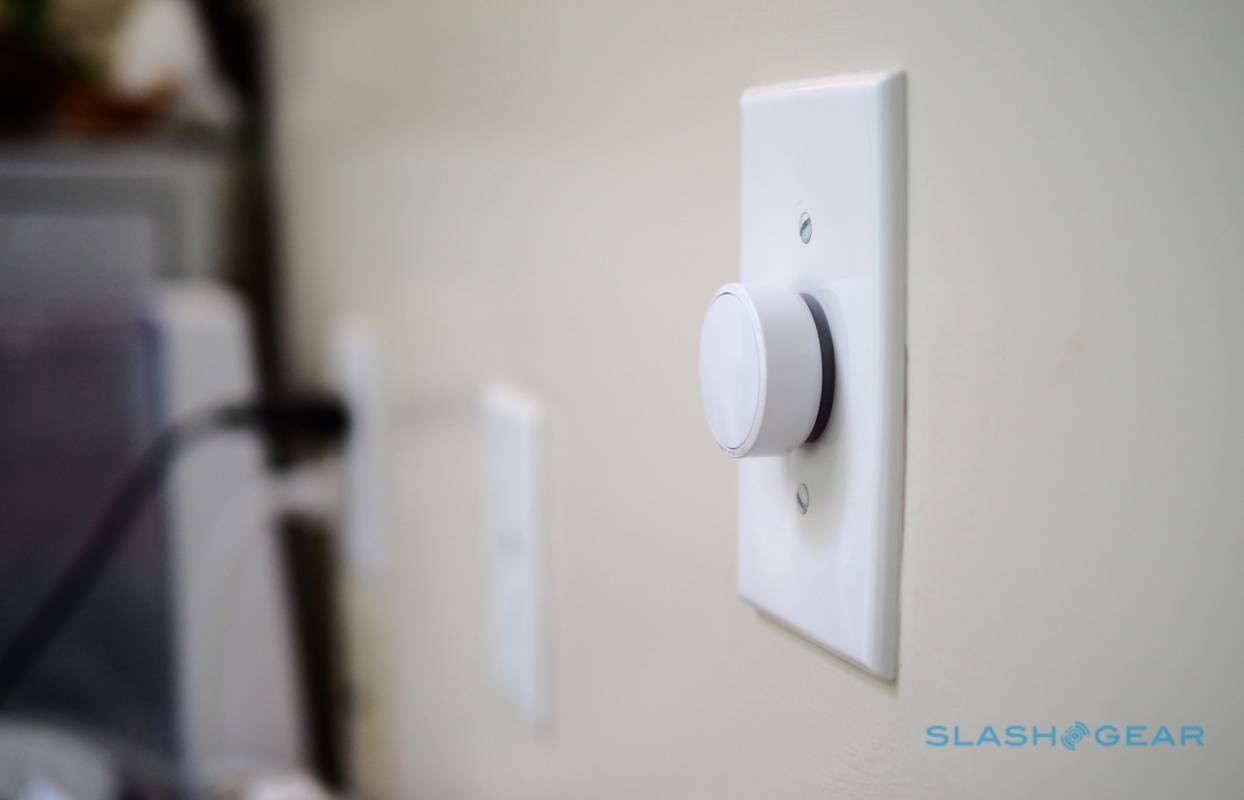 In contrast, the Aurora can be installed without modifying the underlying switch, easily (and non-destructively) removed later on, and you can line up as many of the dials across a multi-switch panel as you have the budget for. As someone who not only rents, but lives in a place with a byzantine arrangement of light controls, I think they’re huge advantages.

As with earlier Hue accessories, price is the biggest drawback with the Lutron Aurora. $39.95 is the same as you’d pay for four white Hue bulbs. It’s also more than an Echo Dot or Google Home Mini, either of which could enable voice control over a whole Hue setup (not to mention command other connected devices that the Aurora won’t).

Then there’s Philips’ own remotes. The Hue Tap is a little cheaper than the Aurora, doesn’t require a battery, and can trigger up to four scenes, though there’s no dimming control. The Hue Smart Dimmer Switch is only $25, meanwhile, and offers the same controls as the Lutron. Neither, however, mount in the same clever way, nor address the issue of someone turning off the traditional switch. 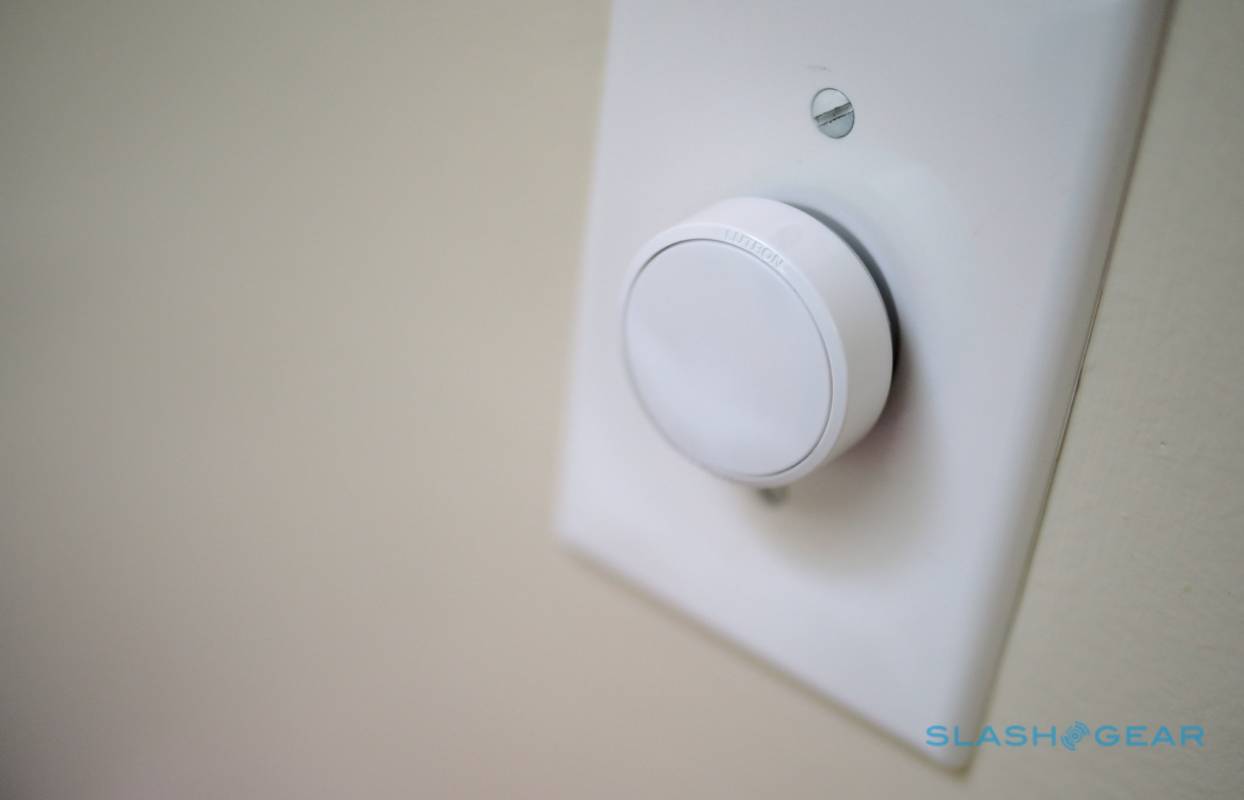 I’m of a mind that having more control options in the smart home can only be a good thing. There are times when I’m happy to pull up an app, and others where the convenience of a smart speaker, touchscreen, or physical switch is far preferable. For some, Lutron’s knob will seem like a more expensive way of doing what other options achieve more cheaply and with broader flexibility.

Others – myself included – will put more value on the fact that they’re non-permanent, easy to install and use, and prevent one of the lingering annoyances of life with Hue. In an ideal world those advantages would come at half the price, but there’s no denying that the Lutron Aurora does what it sets out to, and in a way that’s far more home-friendly than can be said for most IoT gadgets.