As anybody who wished for a more eventful 2020 now knows, sweating the details is important. How else to describe the LG Wing, a rotating dual-screen curio that – even in a time of foldable smartphones – still manages to be an outlier. We asked LG for more interesting phone designs, but maybe we should’ve been more specific.

All the warning signs were there, too. While Samsung, Huawei, and others were flirting with flexible OLED and screens that could crease without snapping, LG’s take on the modern-day clamshell involved removable second displays. Even back in 2013 it proved it could be contrary. 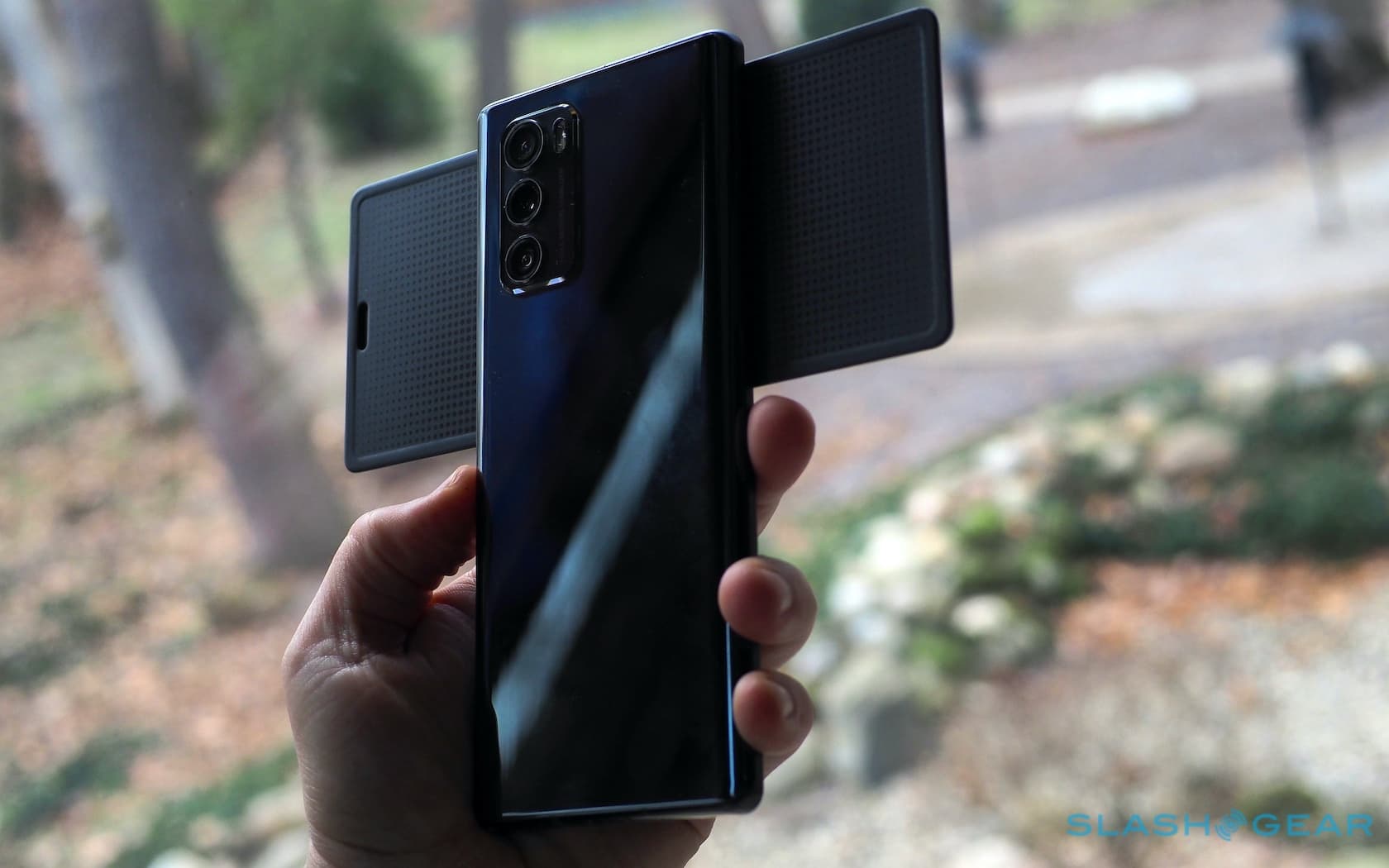 How else to describe the LG G Flex, an earlier adopter of the curved display trend, but which bent its screen like a banana when everyone else wrapped it around their handsets’ edges. “The most human phone ever,” LG’s tagline called it. Well, to err certainly is human.

Fast forward to 2020, and the LG Wing easily takes the crown for the least-expected form factor in mobile. I’ve been using it on and off for the past few months, and I still have a head-scratch moment whenever I pick it up. 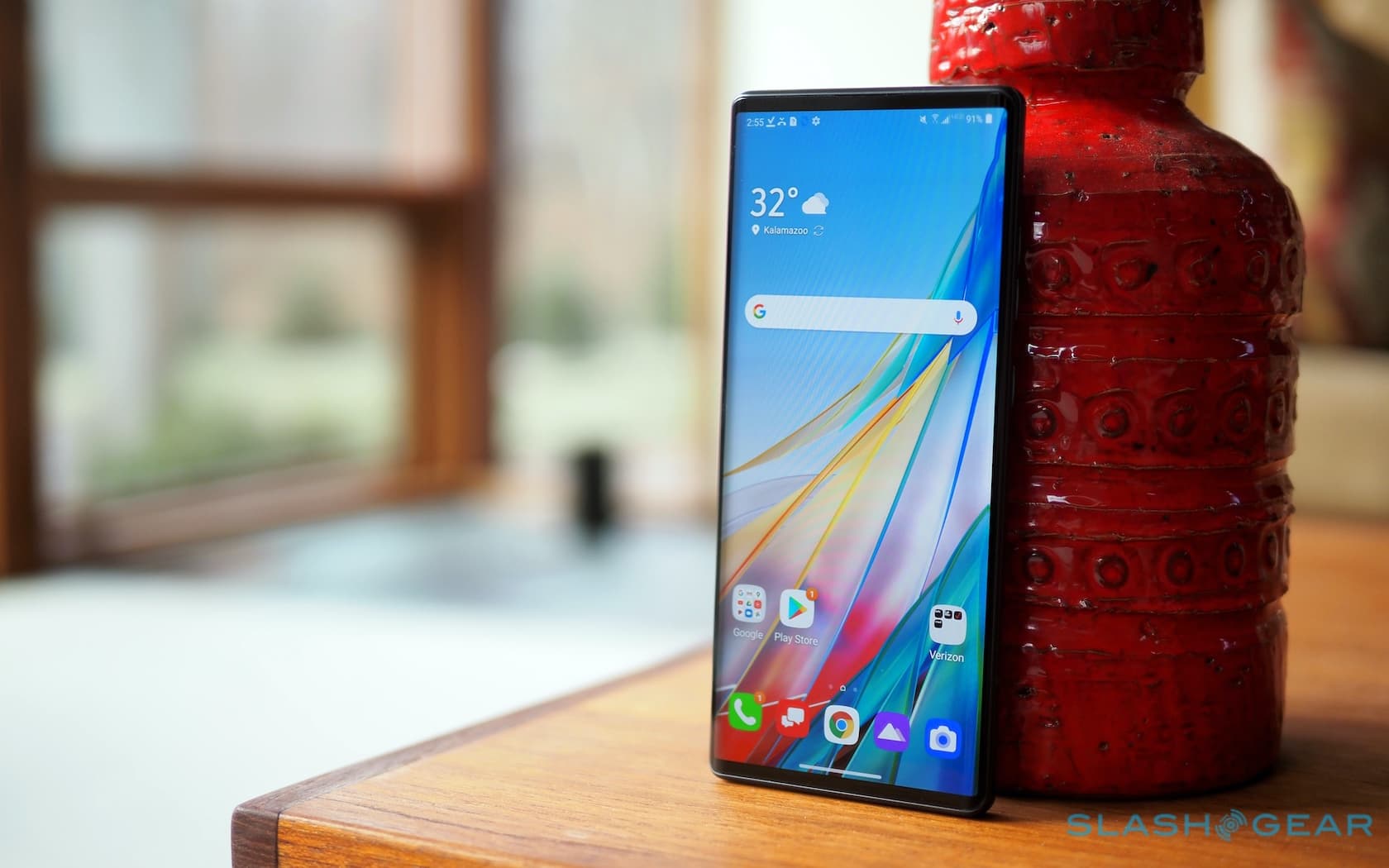 First impressions are of a large, somewhat thick Android phone. The 6.8-inch 2,460 x 1,080 OLED screen is bright and colorful – though uses a 60 Hz refresh rate rather than anything faster – and thanks to a pop-up 32-megapixel selfie camera there’s no cut-out or hole punch to mar it. While it’s definitely chunkier in your hand than most other recent flagships, the smoothly curved edges hide the 10.9 mm girth nicely. Indeed I’d actually say it’s more comfortable to hold over extended periods than the sharper sides of the iPhone 12 Pro Max, though you also have to deal with 9.17 ounces of weight from the LG. 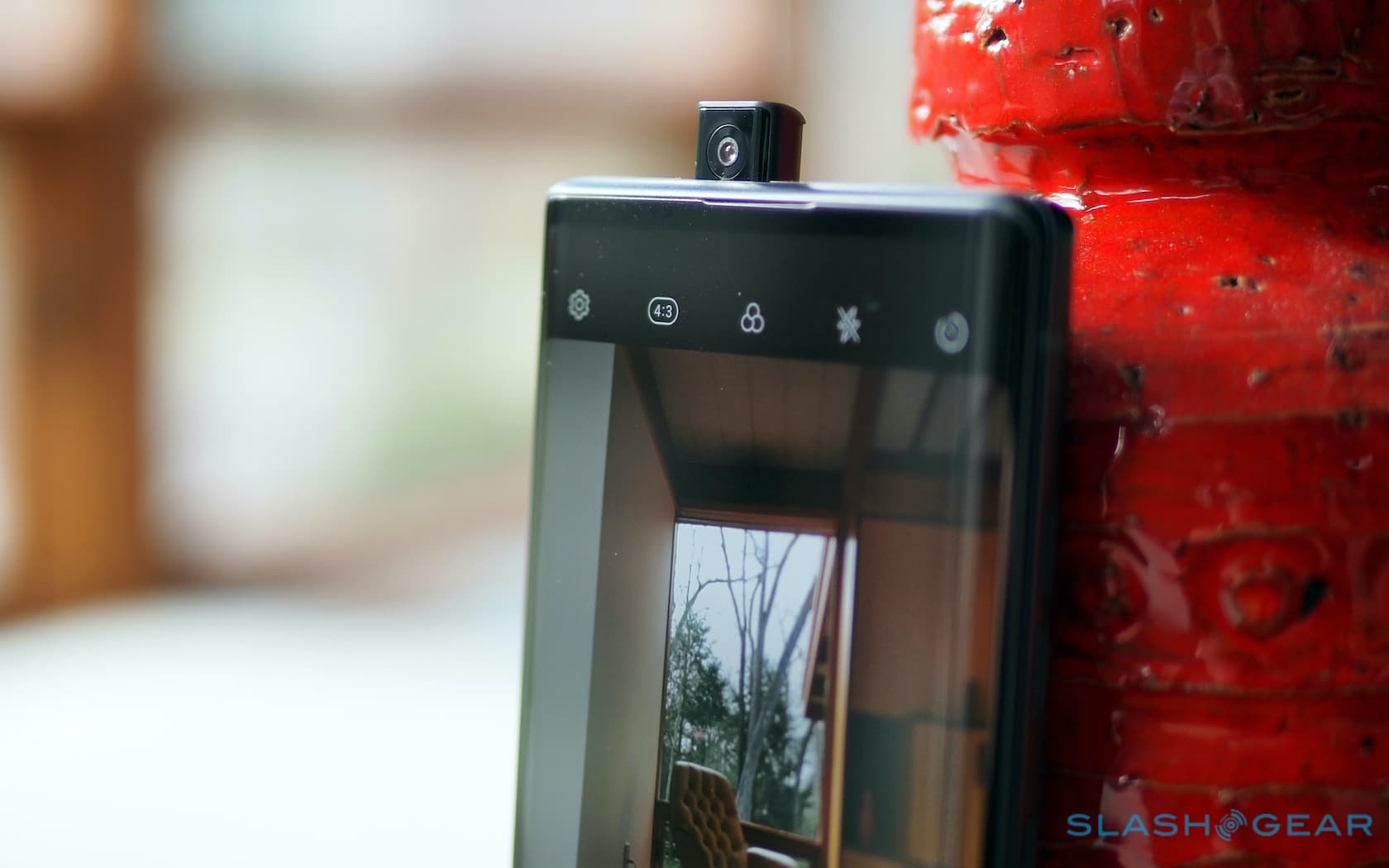 Nudge the display clockwise, however, and the LG Wing shows its differences. The primary screen rotates to landscape orientation, with a 3.9-inch 1,230 x 1,080 OLED panel exposed below it. 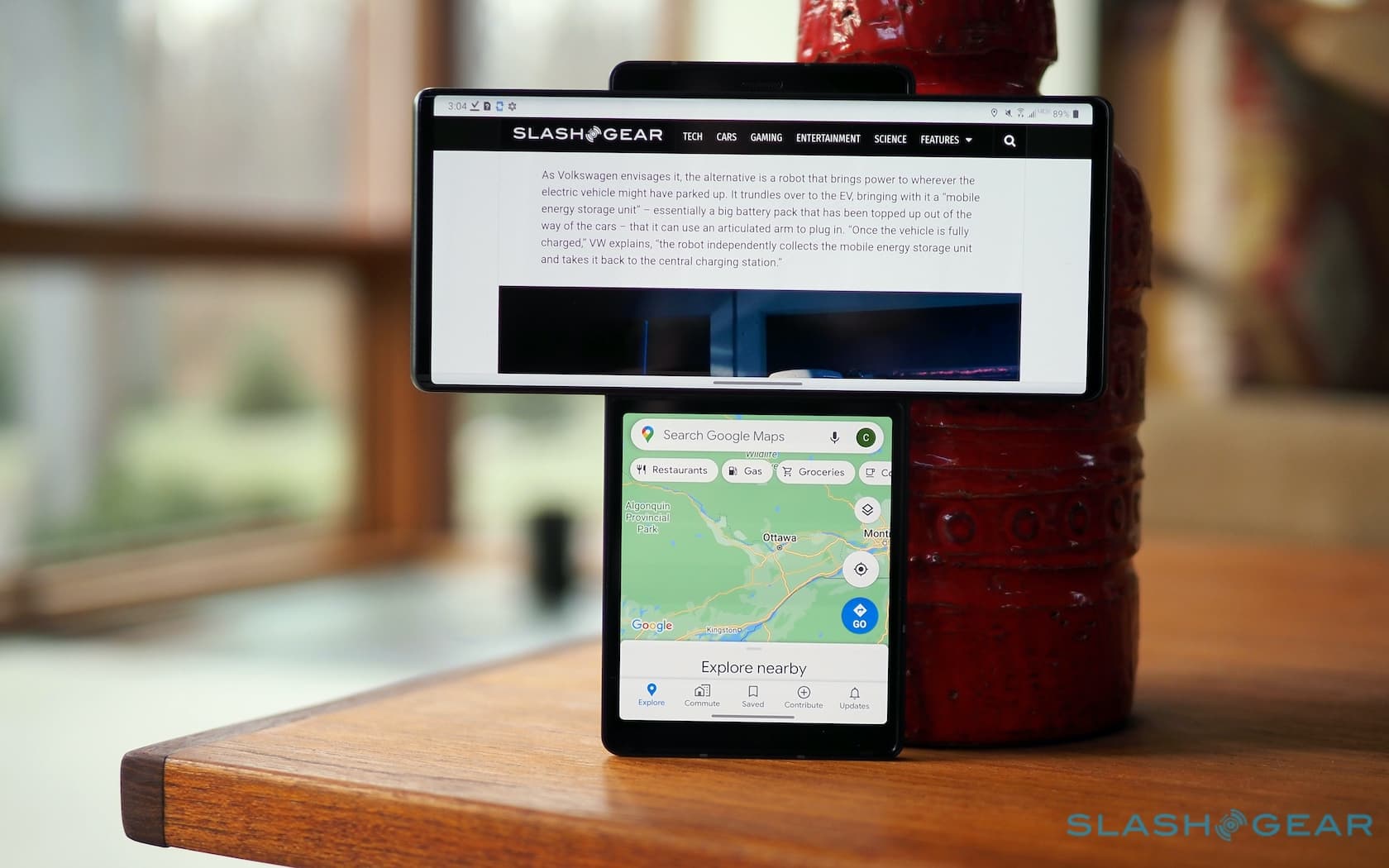 There is, it has to be said, something faintly addictive about that rotation mechanism. Modern smartphones are usually slabs of glass and metal, not designed to open or move in any way. The Wing thoroughly upends that, however, and feels like a movie prop made-real as a result. It feels – and sounds – like LG has truly thought through the engineering involved, and as high-tech fidget toys go it’s hard to beat.

The problem, as in any case where a manufacturer goes off-piste, is that the rest of the world isn’t quite ready for LG’s vision of twisty twin-screen weirdness. More specifically, Android apps aren’t designed to make the most of a phone where, at least some of the time, you’re holding it like a geeky crucifix. 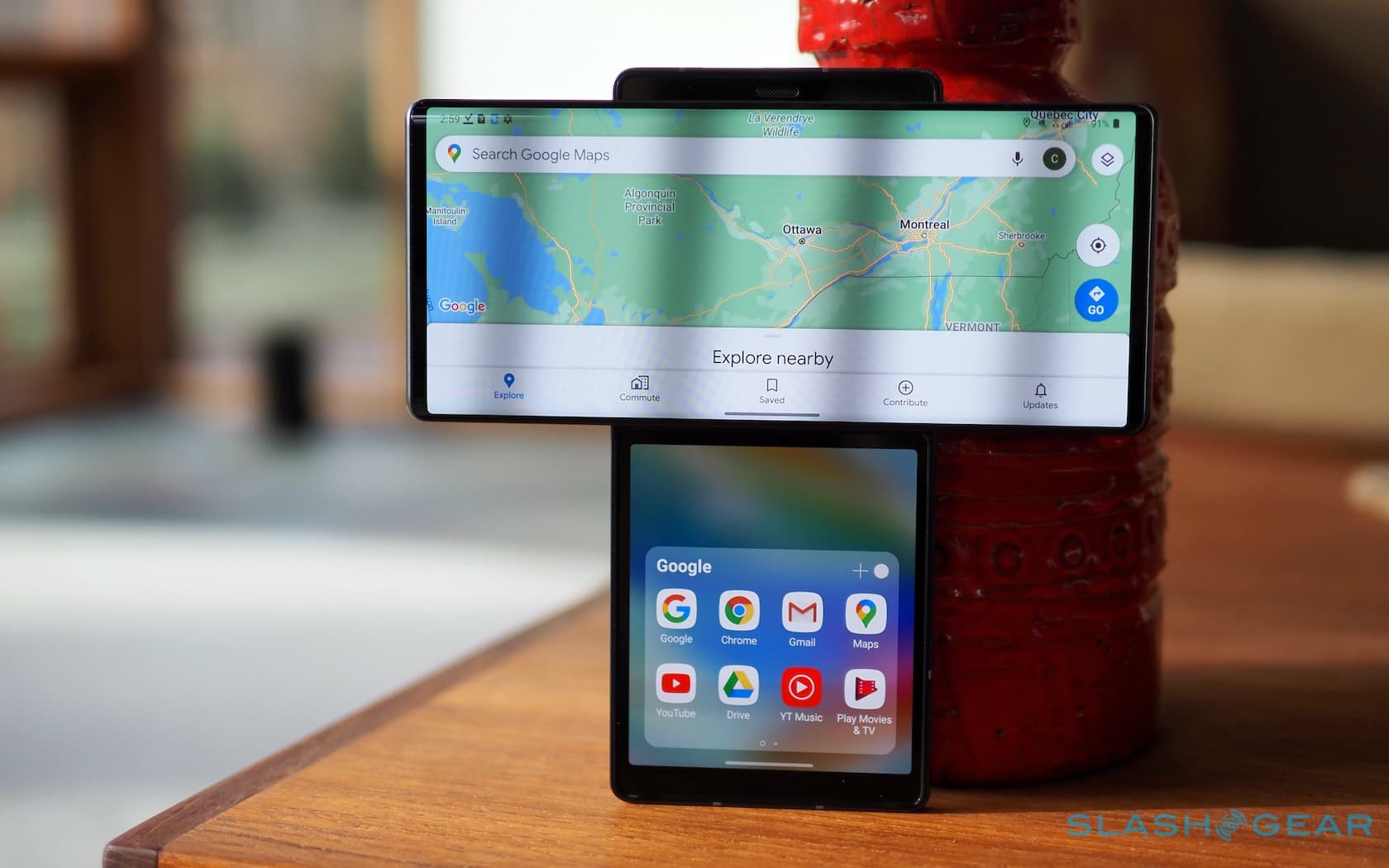 LG does at least lead by example, and its apps are designed to work with both panels. Rather than pretend that you have some strange single T-shaped display, the big screen is the primary one and the smaller, near-square one is the secondary. Android 10 gets a carousel of apps that show up when you flip the Wing open, with the secondary display having a mini home screen. 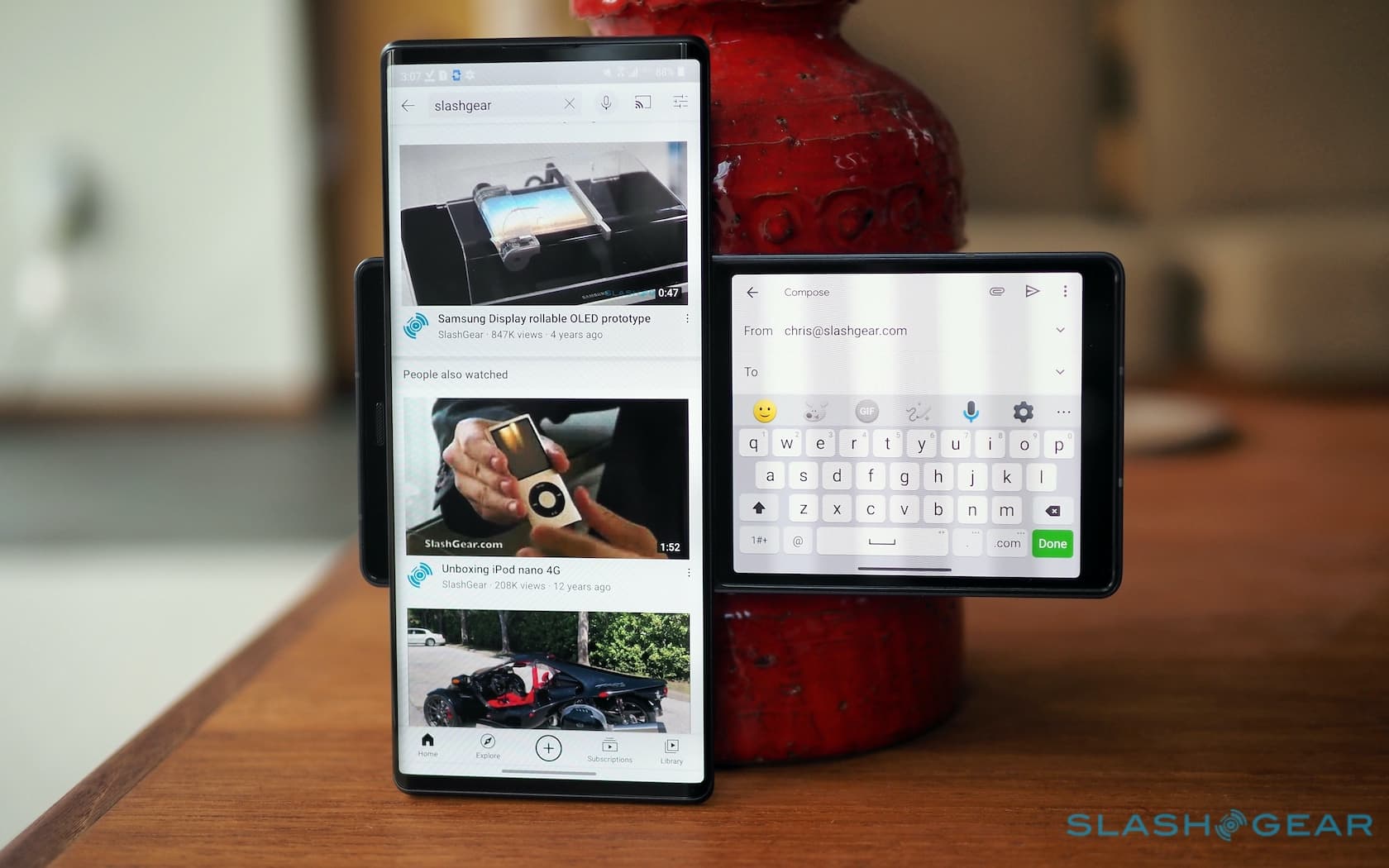 As we saw on LG’s Dual Screen phones, you can pin two apps together and have them both open with a single tap. Or, you can open two apps individually, including having two browser windows visible, one on each screen. You could have the bottom panel for your music controls, or for a chat window, while you review a document or watch Netflix on the upper screen. 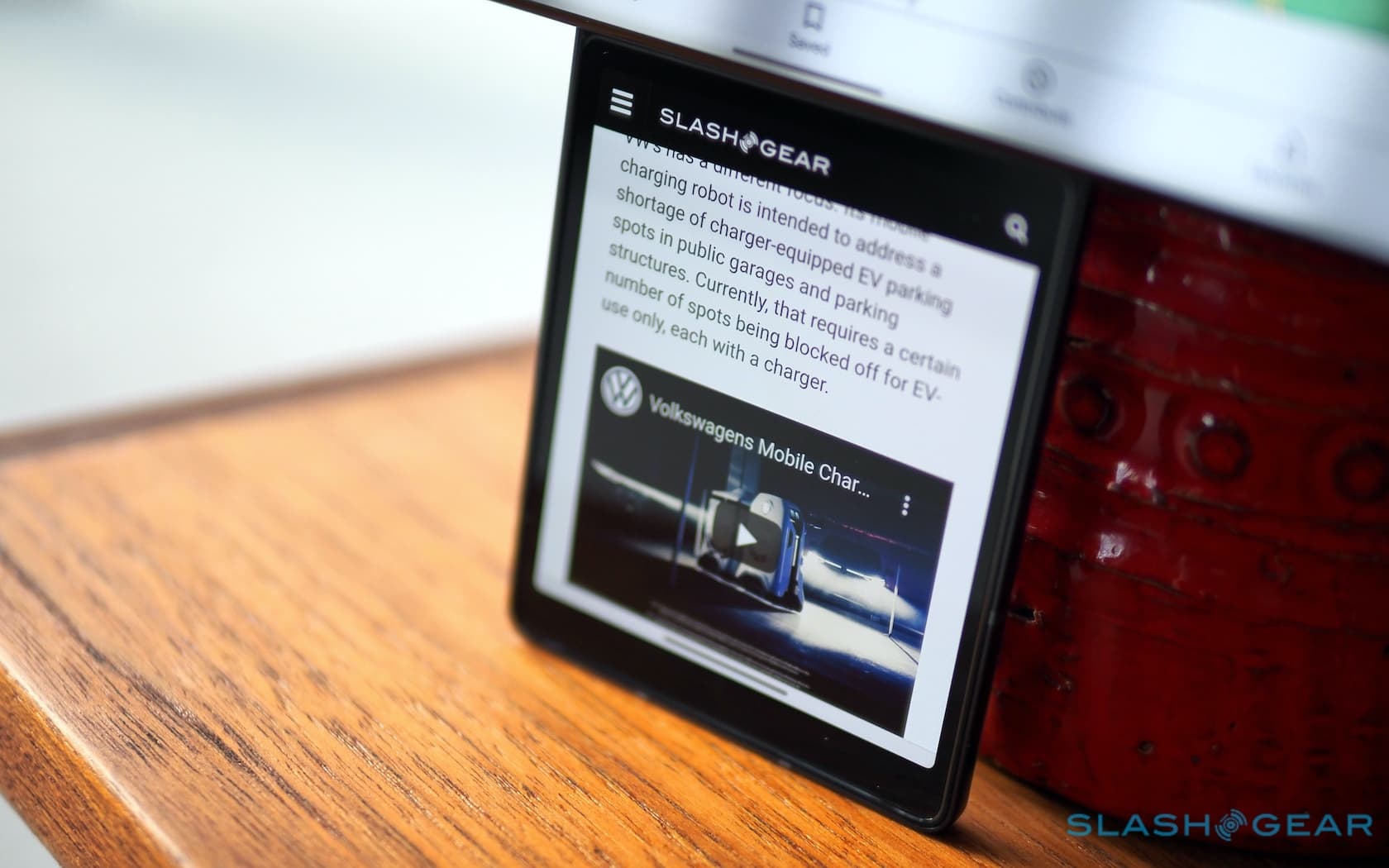 That’s the pitch, anyway. How useful that is in practice depends on how much you want to get done. Android apps are used to big displays these days, and scale their UI to suit: Twitter or Telegram on the Wing’s lower screen are small to begin with, fitting in very little of the conversation, and that only gets worse when the on-screen keyboard takes up more than half that secondary panel. 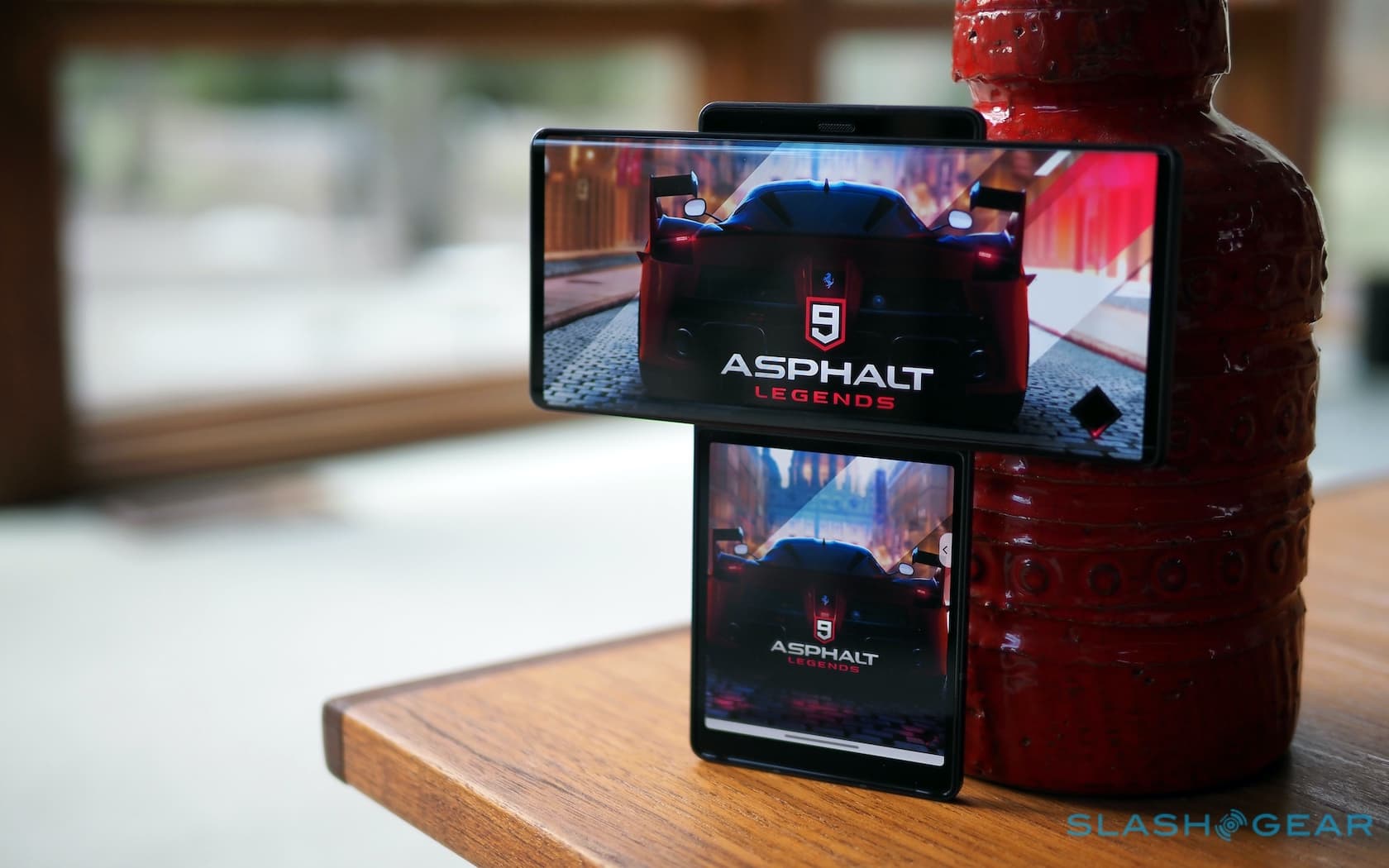 The bigger problem is that most of my go-to apps just aren’t as useful in landscape orientation. Mobile-formatted webpages are laid out to take advantage of screens longer than they’re wide; you can force Chrome to open the desktop version, but then the 9:20.5 aspect primary display makes it feel like you’re browsing through a letterbox. Google Maps looks a little better, but the interface is still designed with portrait screens in mind.

Can I imagine a world where apps do fascinating things with the hardware LG is experimenting with here? Sure, but I also hold little hope that we’ll actually see it. It’s proved hard enough motivating developers to make multi-layout apps for foldable phones, never mind a true oddball dual-display handset that might only stick around for a single generation. 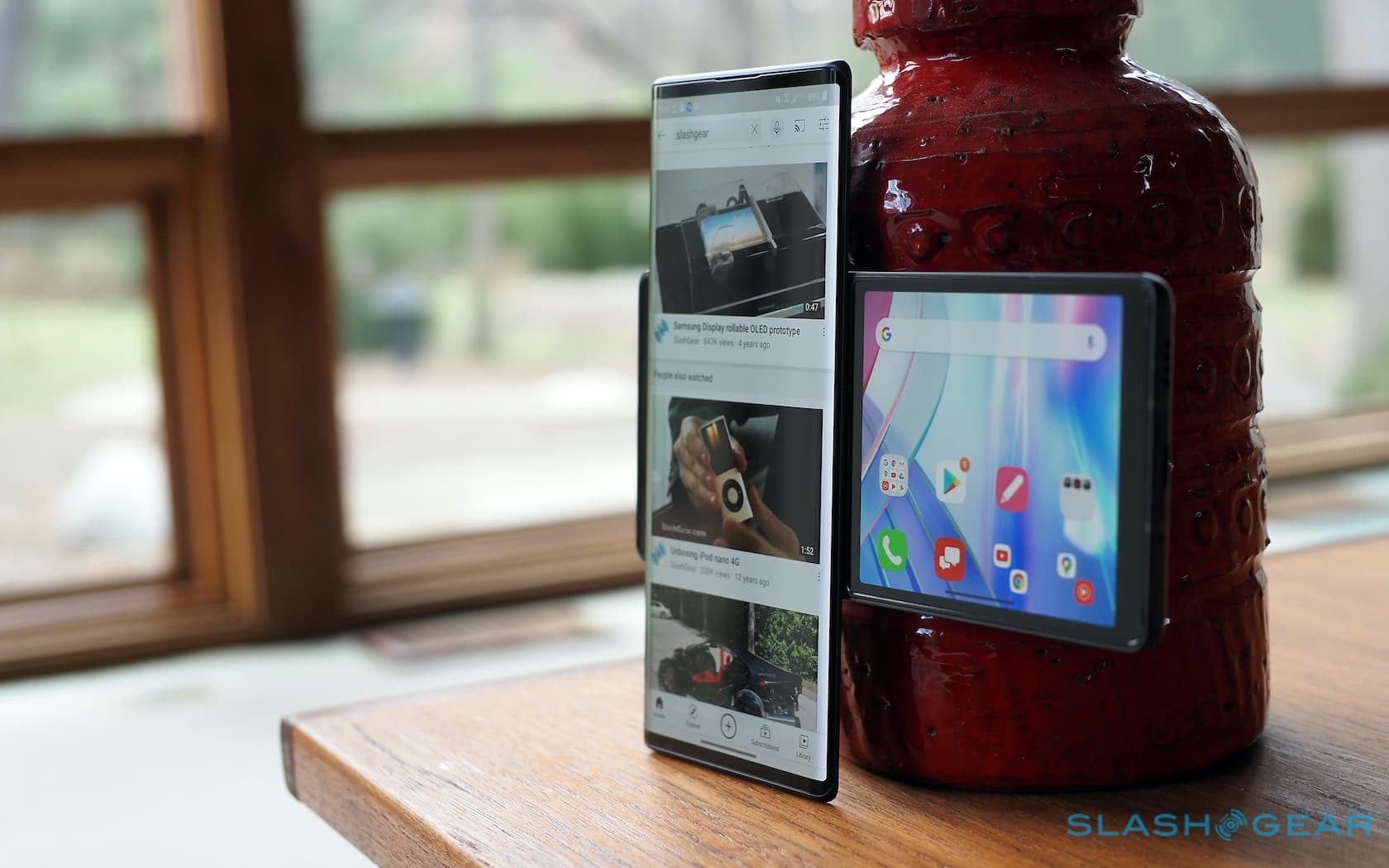 Perhaps, though, we’ve been looking at the Wing all wrong. One of the apps that is updated to play nicely with the twin screens is the camera, and that’s because LG uses the secondary touchscreen for the controls of its virtual gimbal system. 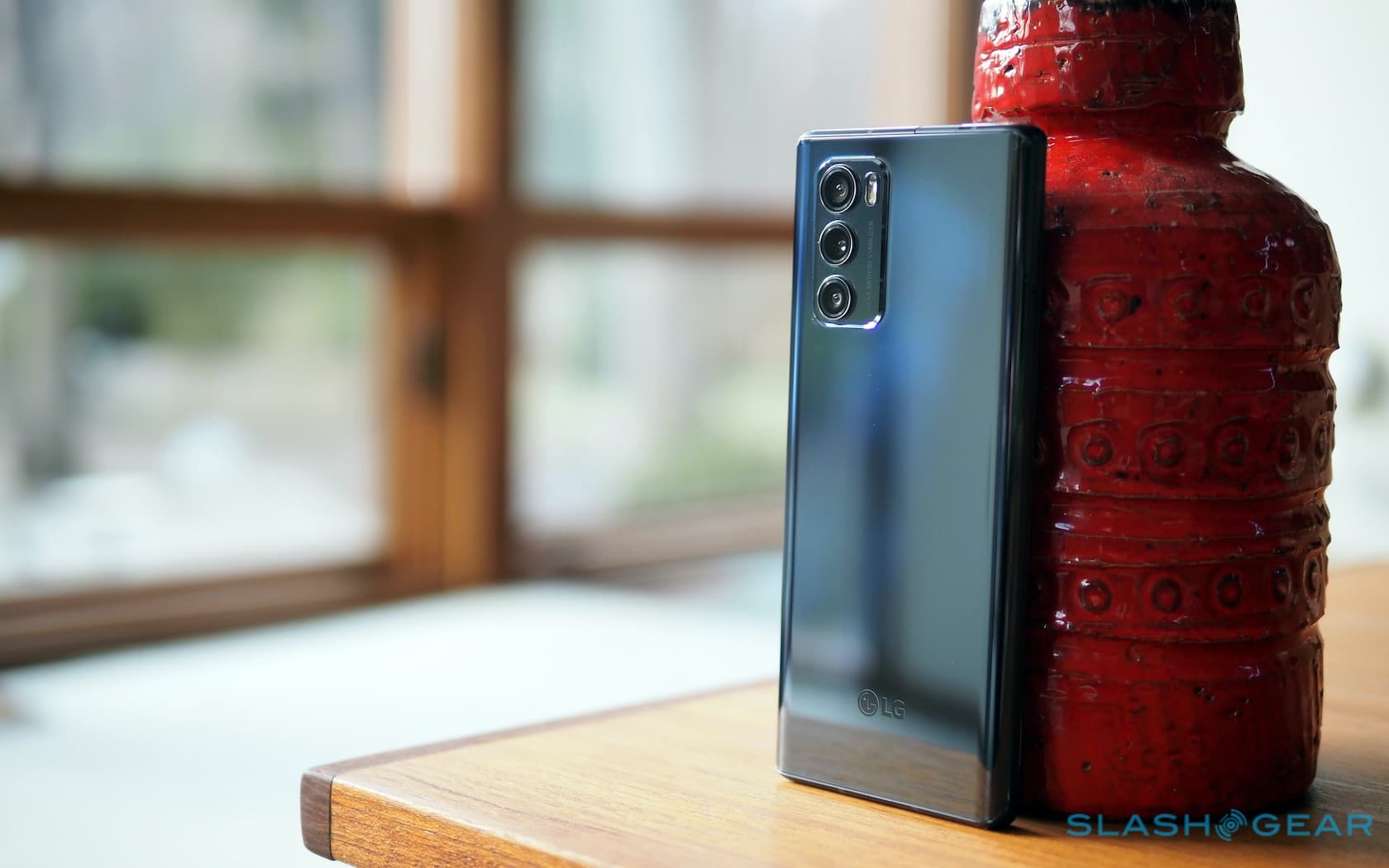 It means you still get the right ultra-wide aspect, even though the rear of the phone is actually being held upright. The virtual grip controls operate a similarly-virtual stabilizer, for smoother pans and such. It all looks much like you’d expect from, say, a DJI Osmo, but LG does it with clever cropping and software trickery. 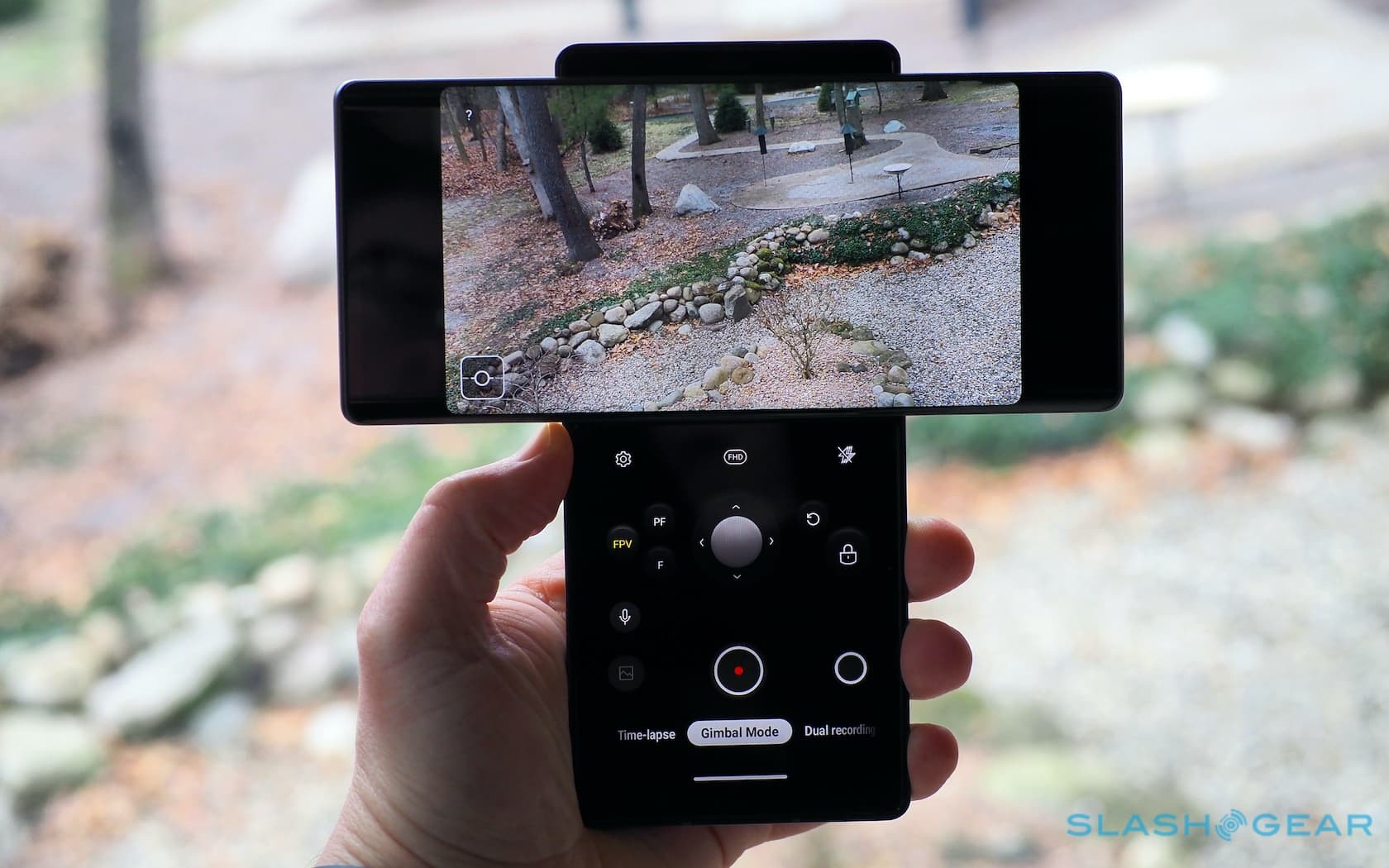 On paper that’s grand, but you still bump into some headaches in practice. The Wing can shoot up to 4K footage, but since it delivers its stabilization by cropping you can only use the gimbal mode at up to 1080p Full HD. You can’t use the gimbal system with the main camera, either, so its extra megapixels are out of reach. Stills taken with the phone, meanwhile, are fine, but low-light performance in particular doesn’t reach what we’ve seen similarly priced Android devices deliver this year.

As for the rest of it, we can probably blame LG spending on the swivel for the decision to go with a Snapdragon 765G rather than something from Qualcomm’s 8xx-series. There’s IP54 splash-resistance, which is actually a surprise given the complexity of the construction, and 8GB of memory, but no 3.5mm headphone jack and the 4,000 mAh battery drops more rapidly than I expected given its size. At least you get QuickCharge 4 for up to 28W adapter support. 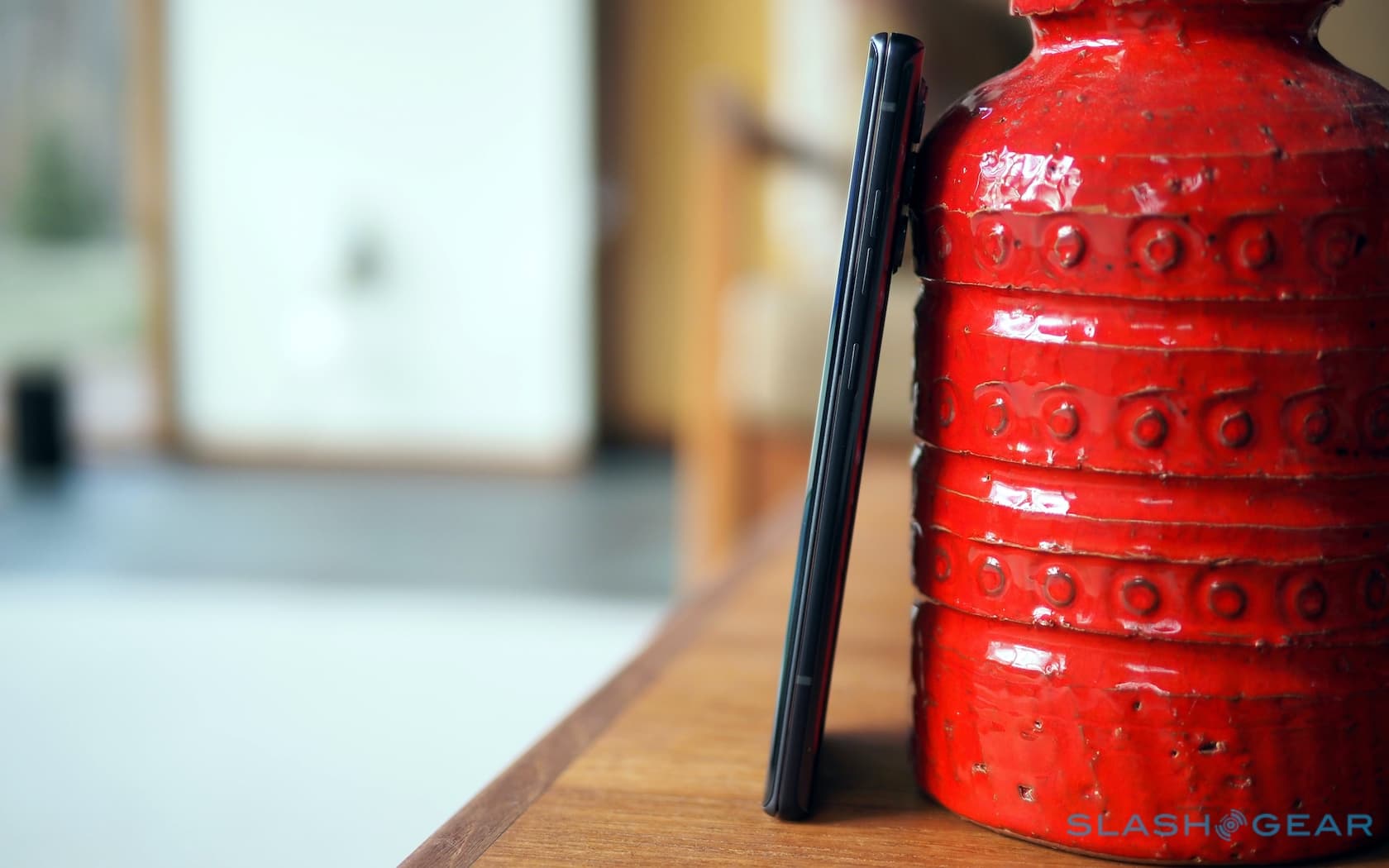 For connectivity, LG has one Wing for AT&T and Verizon 5G, and another for T-Mobile. The former has both mmWave and Sub-6 support, though while mmWave can be much faster you’re definitely not going to find it as frequently.

The tech-loving geek in me adores the fact that LG did something kooky with the Wing. It’s part of what the company calls its Explorer Project, focusing more on imagination than outright sales potential. The realist in me thinks that’s a good thing, because while the Wing may be fun it doesn’t really deliver functionally. 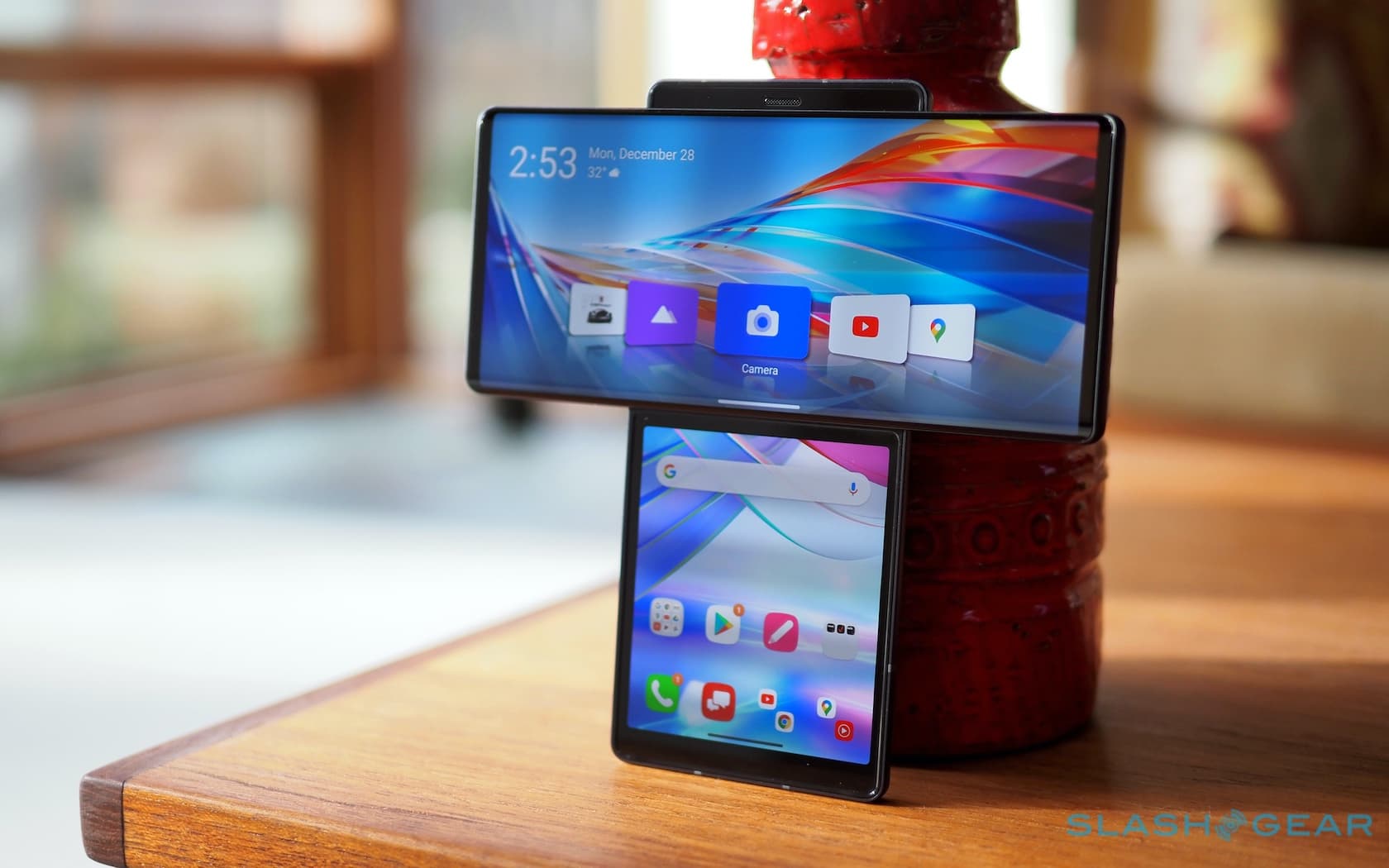 Having multiple displays so that different apps can coexist in different ways isn’t a bad idea, per-se, but it requires more than just hardware. I have zero confidence that the Android app ecosystem is going to embrace the Wing form-factor and come out with must-have software that only its dual screens can make the most of. I don’t even really have much confidence that LG will commit to supporting the idea.

That’s a problem when you’re talking about a $1,000 phone, and while Samsung’s Galaxy Z Fold 2 may be more expensive it does at least feel like a glimpse of what the future will look like. The LG Wing, in contrast, feels like an outlier: a gadget from a parallel timeline that somehow managed to slip into ours. The Wing sure is interesting but, as 2020 has demonstrated, that doesn’t necessarily make it a good thing.