It’s time to have a peek at Lenovo’s next big crack at the tablet game with Android 4.0 Ice Cream Sandwich and a massive set of built-in apps on a quad-core processor-toting 9-inch tablet by the name of IdeaTab A2109. This device’s NVIDIA Tegra 3 processor with 4-plus-1 technology allows it a massive amount of battery life as well a lovely collection of games that are unique to the NVIDIA Tegra architecture. Meanwhile the tablet is one of Lenovo’s best – but is it worth the less than perfect display and device weight? 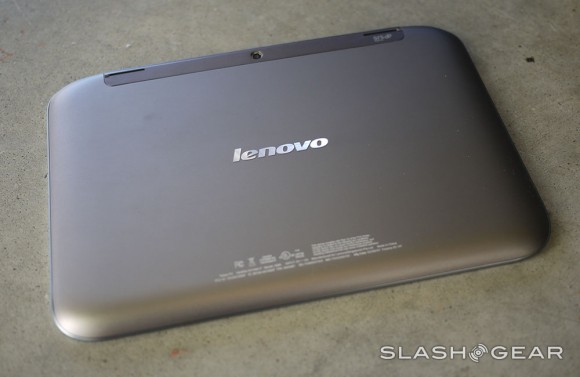 You’ve got a 1.3 megapixel camera on the front for video chat and a 3.0 megapixel camera on the back that takes OK photos and video – don’t expect to get too many masterpieces from either unit. See a few examples of the quality of this device’s main camera lower in this review. The sound collection quality is surprisingly decent, on the other hand, with one mic hole on the left and the other on the right of the device, this aiding in sound cancellation. 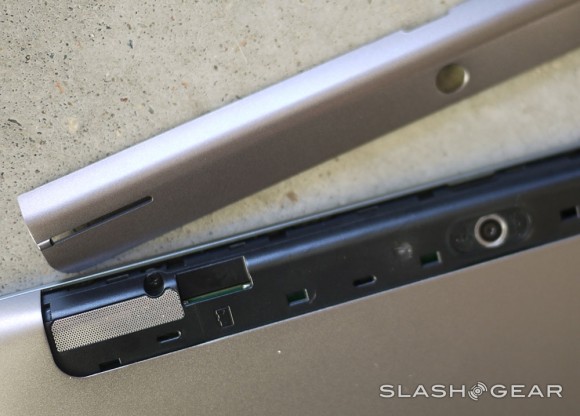 The ports you get around this device are relatively abundant for how expensive the device is, starting with a microUSB port on the right side near a micro-HDMI port for HD video output. The quality of the video you get here to an HDTV (provided you’ve got the right cable) is generally good – not spectacular, but certainly good enough for basic Google Play video and YouTube viewing. You’ve also got a basic combo jack for your headphones and microphone if you’d like, too. 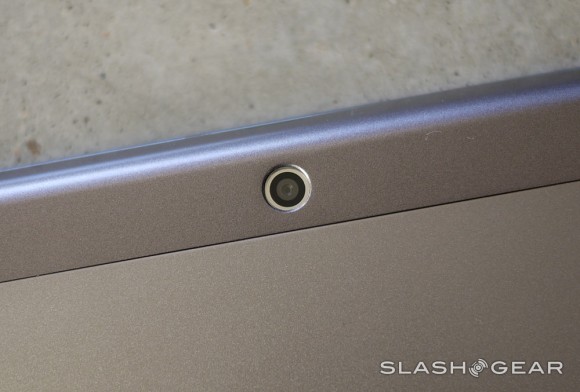 You can get this device in 8GB and 16GB internal storage iterations and right under the top-back panel you’ve got a microSD card slot where you can expand your memory by another 32GB if you wish. The overall build quality of the tablet is rather high, with Lenovo letting us know that they’re not skimping on the construction just because it’s not a laptop or a desktop unit. 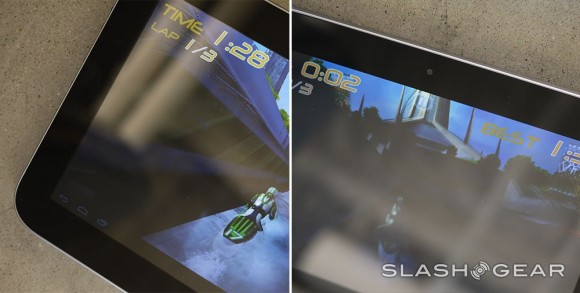 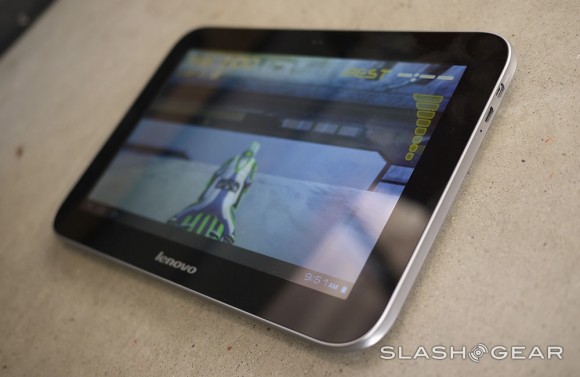 The display, on the other hand, is of a surprisingly lower-quality build than the rest of the device. The viewing angles are OK for the most part save – believe it or not – the top angle which does a color-flip once you’re at about 45 degrees. It’s a bummer, but if you’re the kind of person that keeps your tablet flat on the table most of the time, you’ll have a fine time. You’ll want to check this out in the store before you pick it up for this reason alone.

This unit works with Lenovo’s own flavor of Android 4.0 Ice Cream Sandwich – this means there are a few modifications in the way you move back and forth between homescreens and you’ve got a vast collection of apps right out of the box. You also have some lovely widgets that are essentially giant folders where you can store your apps, get weather information, access music you’ve got stored on the device, and write notes. 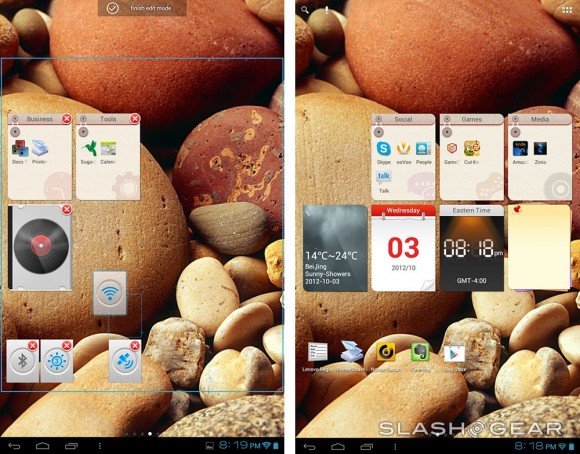 You’ll want to check out our hands-on with the device in the video in this post to see how the software functions – there are a few hiccups here and there due to what we must assume is a firmware build that’ll be updated by Lenovo in the future. Lag here and there and some tiny one-pixel-row skips. Nothing to get too bent out of shape over.

The list of apps that you get in this device, if I’ve not said it enough already, certainly appears large compared to its competition. GO Keyboard, AccuWeather, Amazon Kindle, Lenovo App Shop, Cut the Rope HD, Docs to Go, ES File Explorer, Evernote, GameTanium, Lenovo Registration, LoPokeTALK for low-priced calls (for real, really), News Republic, Norton Security, ooVoo, PrinterShare for Lenovo, Skype, SugarSync, Wi-fi Direct, and Zinio – and these are only the apps added by Lenovo, there’s also the full set of Google apps you get with basically every Android device on the regular – the list also changes based on which region you pick this device up in.

This device is designed for the first-time Android user – one who wants to see what a variety of apps can do without looking for them first on the Google Play app store. If that’s you, you’ll feel perfectly comfortable in this environment. There’s also a lovely app simply called “UI Intro” that shows a video for your benefit – a lovely presentation of the user interface on your device – and it looks nice!

The camera on the back – all 3 megapixels of it – is in place for basic shooting only. Don’t expect it to perform any miracles. That said, if you’re into the Instagram scene, you’ll have some great success. Have a peek at some examples of highest-definition-possible photos and video. 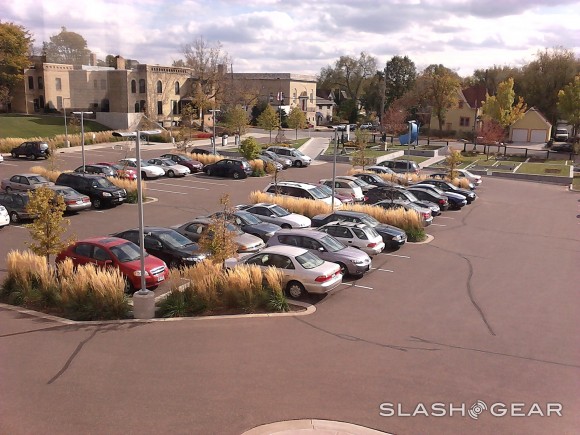 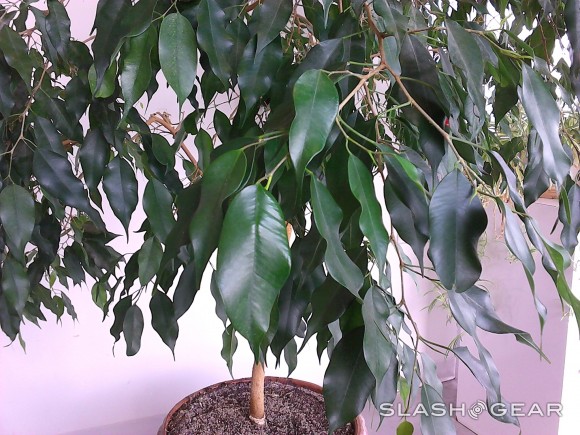 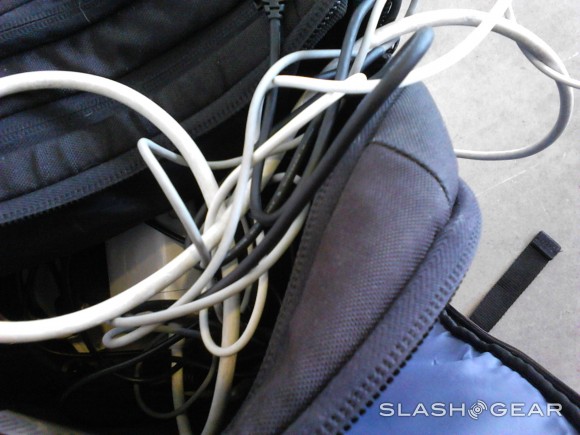 With the NVIDIA Tegra 3 quad-core processor under the hood here with 1.2Ghz clock speed, you’ve got what’s basically the best piece of architecture in the whole device. NVIDIA’s constructed a processor that makes this device run smoothly – for the most part – with its only limits appearing to be the user interface in certain areas which seem to lag upon opening. Having seen the processor in action on several tablets in the past, I’d say these oddities have more to do with the software build than they have to do with the hardware – but in the end it’s always a combination of the two.

Have a peek at the basic benchmarks we’ve run on this device above and check the battery time below as well. This device benefits from the “ninja” 5th core in the processor (the Tegra 3 actually has 5 cores, the 5th only running when the device doesn’t need to be running high-demand tasks) – here the A2109 Lenovo tablet uses this architecture well, with battery life that does great on a regular basis. 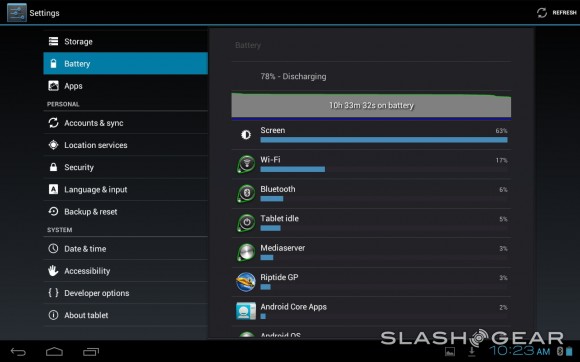 This device is a good effort from Lenovo, but put up in a competition against the rest of the Tegra 3 tablets we’ve seen, it’s just a bit lacking. If you’re looking for a 9-inch tablet with NVIDIA processing power inside it, this is your best bet, that’s for certain – especially if you just want it to be your radio all on its own: the speakers are really worth a listen. The A2109 really does have the power to run next-generation apps too, and you’ll have full access to the NVIDIA TegraZone app collection as well. 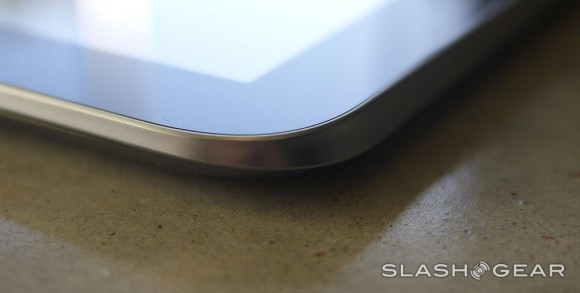 This device will run you $299, and for that price you’ll not be finding another tablet like the A2109. You can of course pick up a Nexus 7 for $199 – but that’s smaller than this. You could get an iPad mini (if it does indeed exist in a few weeks), but that won’t have Android, of course, and it certainly wont have a 9-inch display. Basically the final verdict is this: with a unique build, you won’t find Lenovo’s offering here lacking if you want it for a media-delivery system – unless the display will trip you up: check it out in the store, you simply must.