We’ve got the biggest LEGO Technic set in the world here this week and we’re about to get in deep with how much we dig it. This is the LEGO Bucket Wheel Excavator, a “Technic” brand set that utilizes mainly Technic pieces, but a small set of standard LEGO bricks as well. This set is more than just a Technic set – it’s not just a model. It’s not the sort of thing an adult builds and lets sit on a shelf, as some LEGO Technic sets are prone to do. Instead, this set, be it on purpose or by complete coincidence, works with LEGO Minifigures.

Run by a bunch of Emmets

As we were very, very big fans of the LEGO Movie (see our original LEGO Movie Review), we’ve got a lot of Emmets on-hand. More Emmets than we do regular construction workers, as it were – and so this photo session came into being. 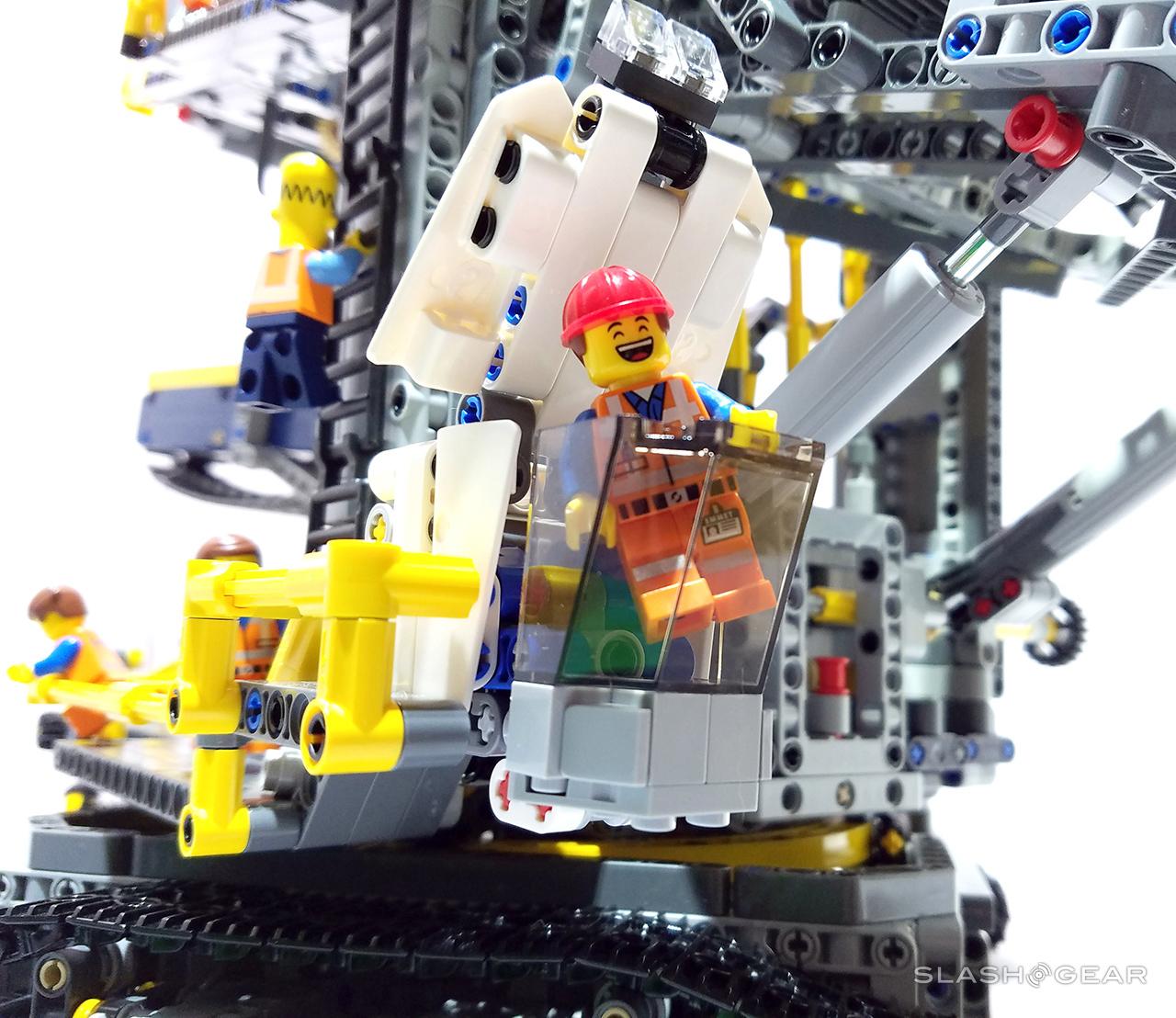 NOTE: LEGO makes no claim that this set is able to work with Minifigures (Emmet or otherwise), it’s just us here at SlashGear that’ve decided it should be so.

The set is built completely according to the instructions included with the set (minus the extra dump-truck, which we’ve not photographed here), and Emmet looks like he’s right at home in nearly every location a person might stand on a machine such as this.

Emmet fits in the Bucket Wheel Excavator’s driver’s seat – not perfectly (unless we wanted to mod it), but close enough. 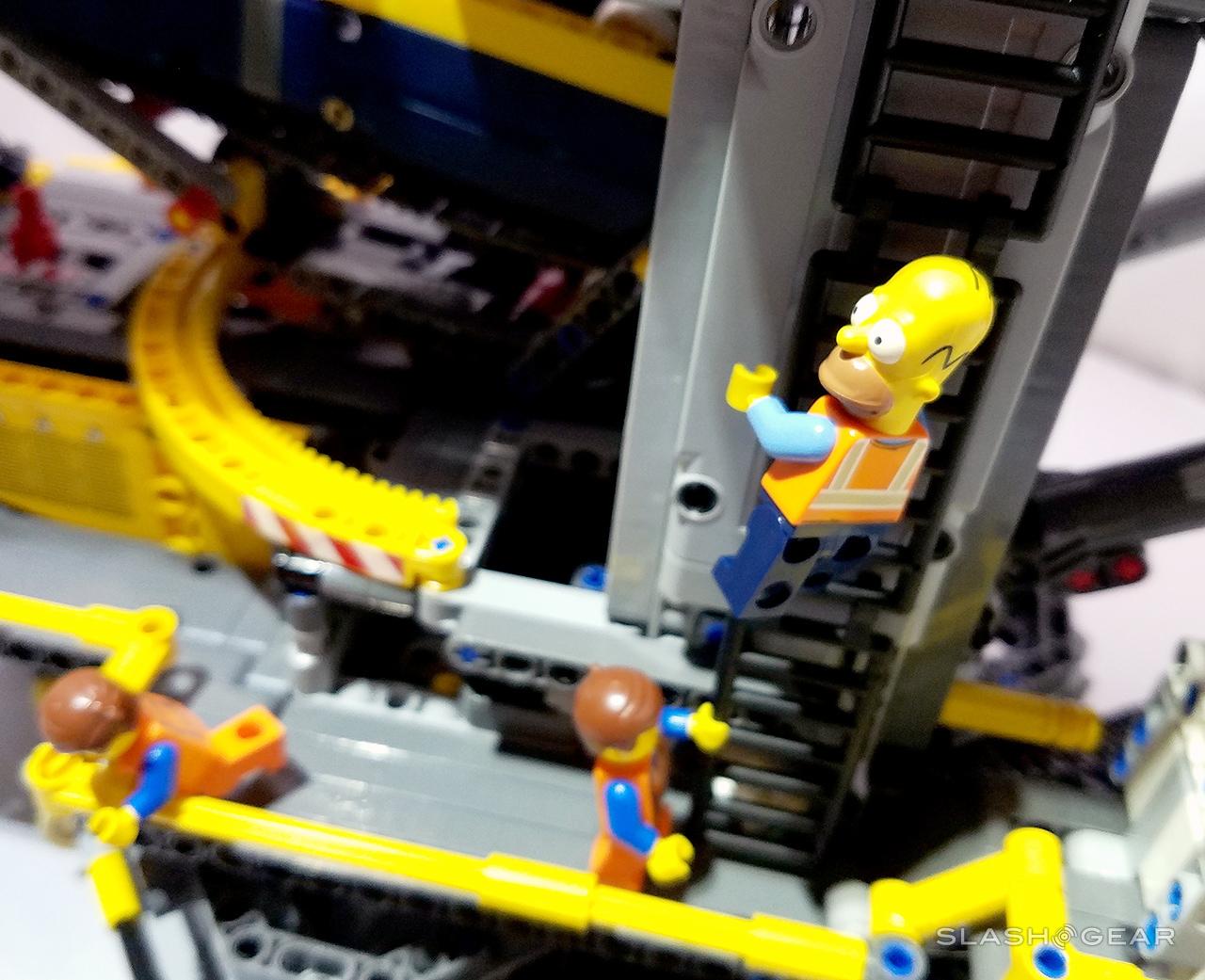 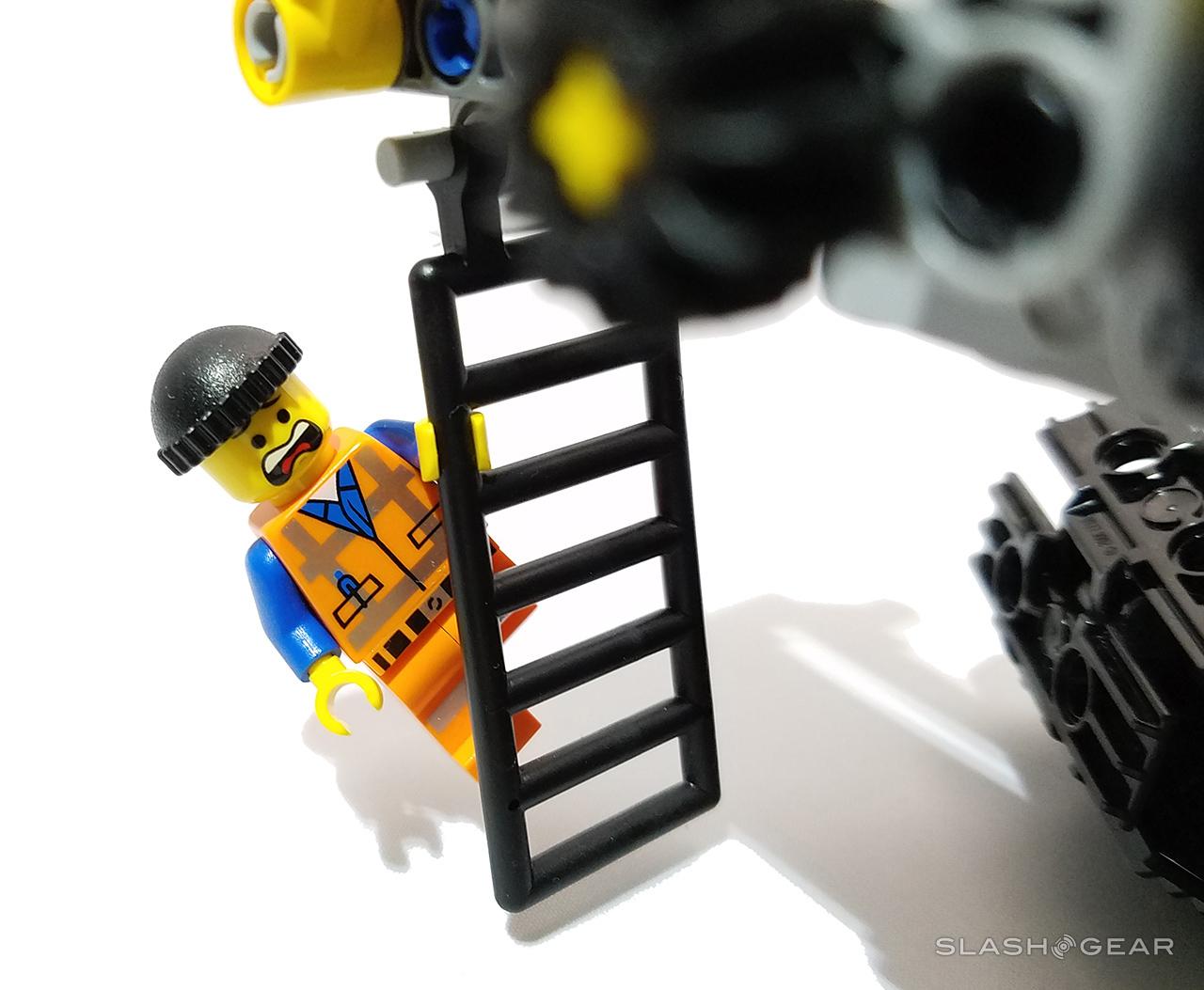 Emmet hangs from the ladders – which are, of course, standard Minifigure size. 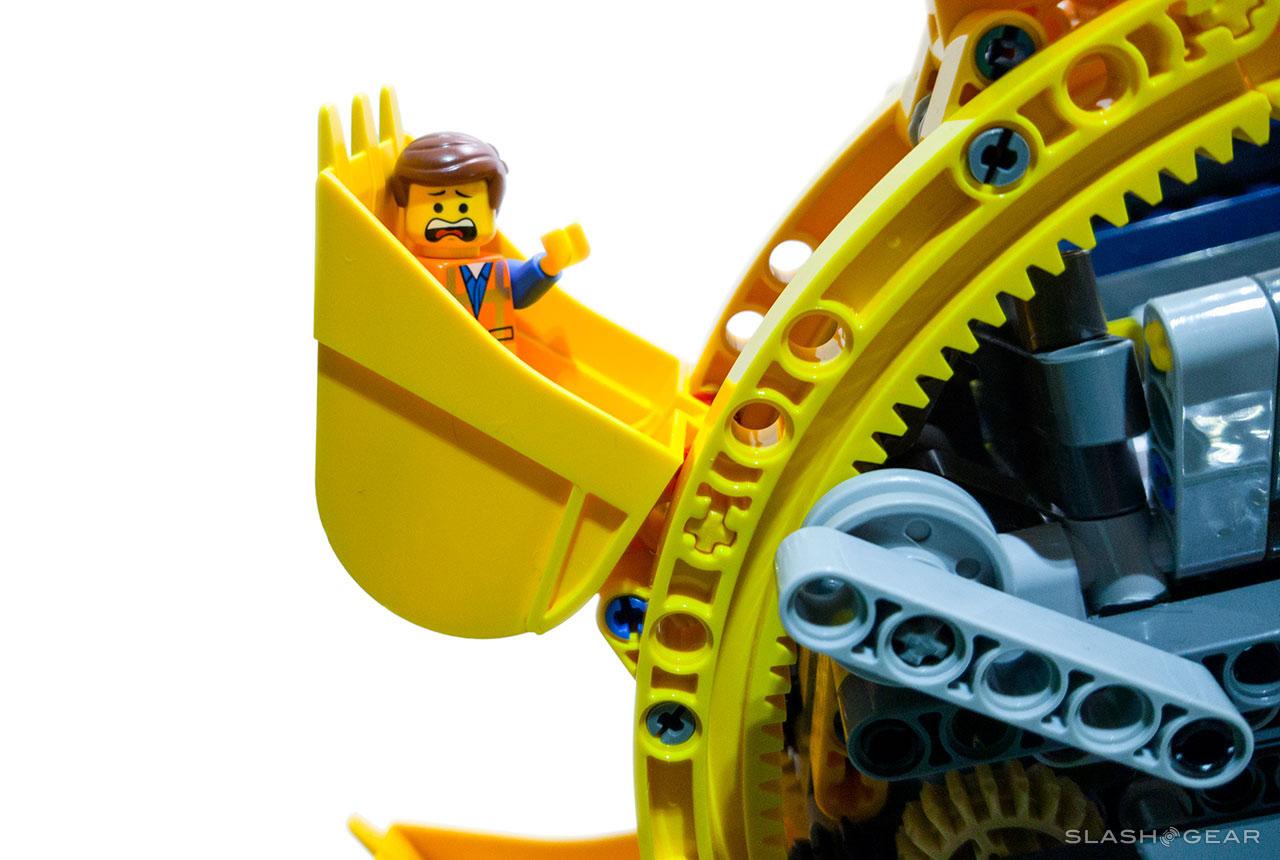 Emmet sits in a shovel!

FUN FACT: This is currently the largest LEGO Technic set in the history of LEGO.

This Bucket Wheel Excavator has a LEGO motor and battery box that, with the help of a large number of gears and bars and three switches, makes for an interesting set of abilities. The battery box and the motor sit right next to one another at the tail end of the crane – the end opposite the shovel wheel. There, 6x AA batteries later, the builder is able to control the excavator. 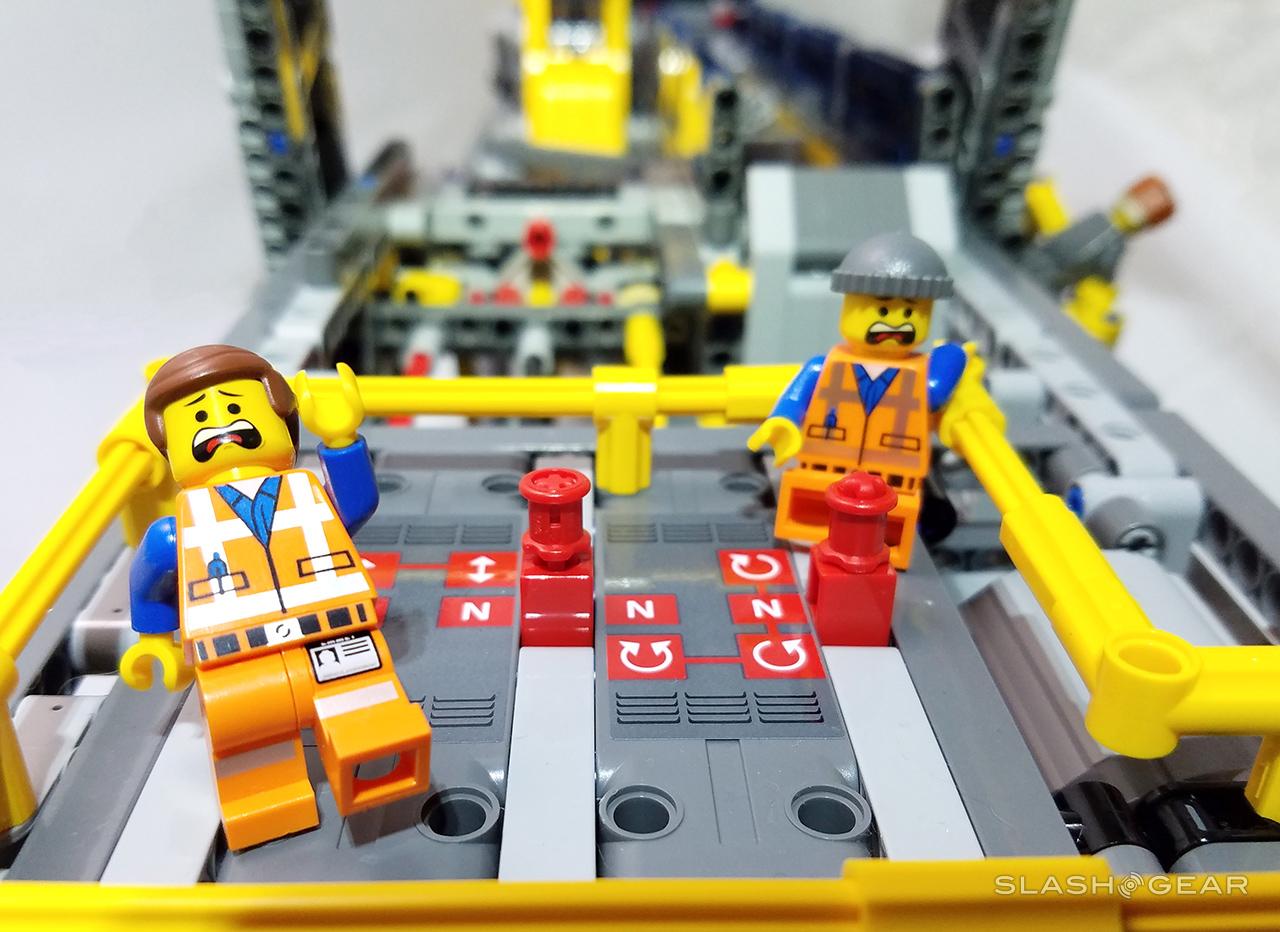 Actions are controlled by three switches at the top of the tail end of the crane, just to the side of the battery box and motor.

As such, if the builder wishes to activate the treads so that the bucket loader moves forward or backward, they’ll also need the shovel wheel moving at the same time.

The same is true of the entire top portion of the crane moving left or right – that requires that the switch be flipped for the shovel wheel, too. 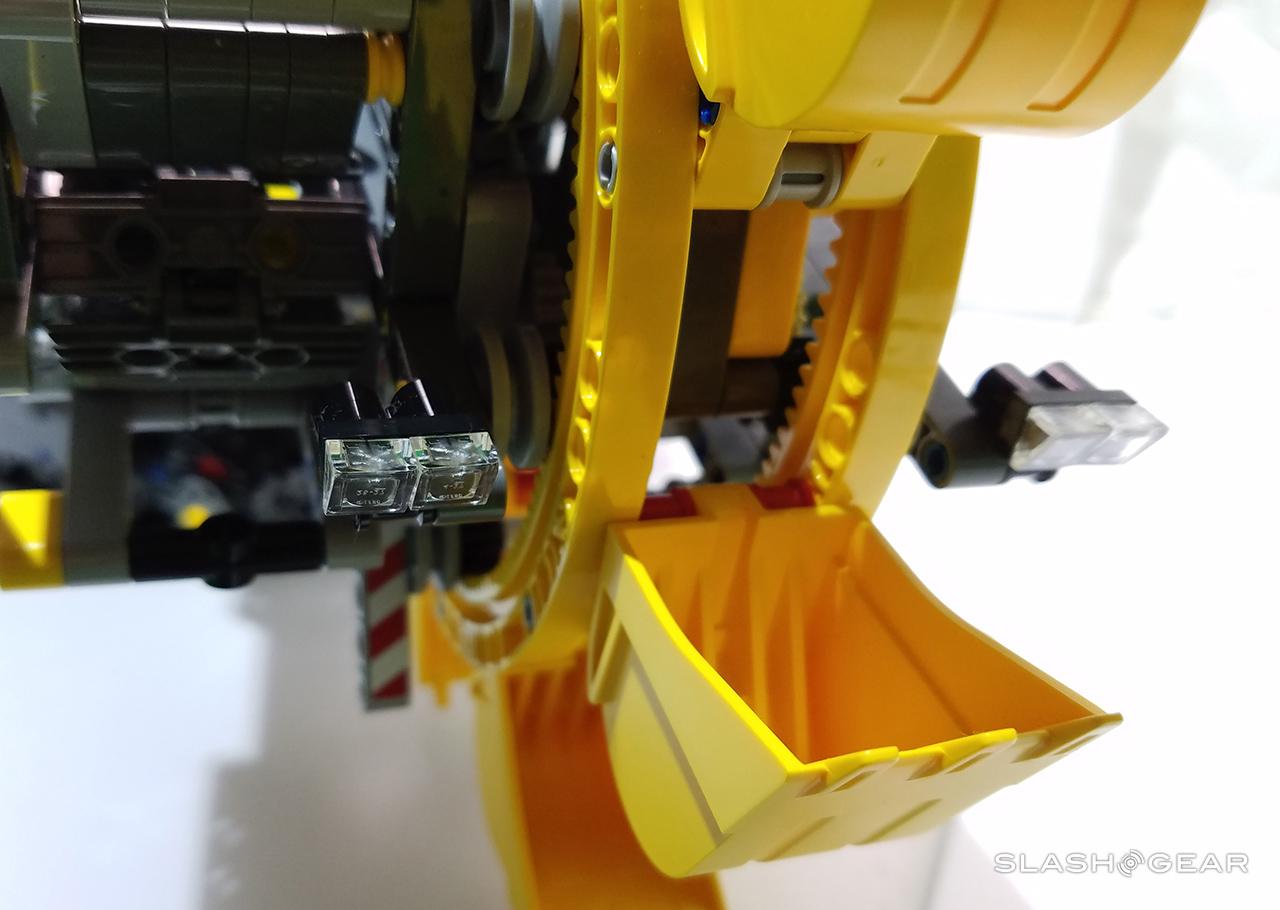 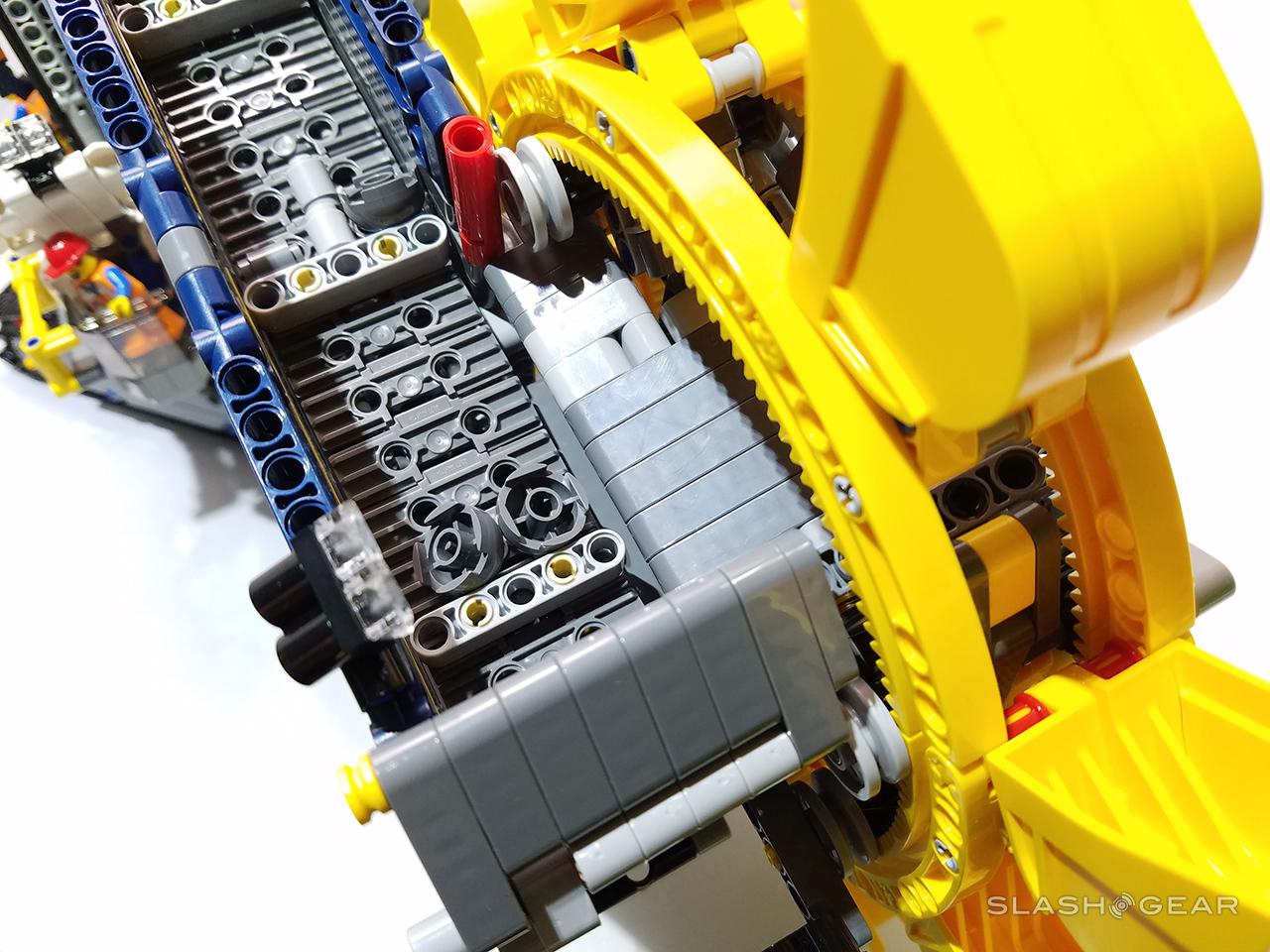 STEP 5: Second Conveyer belt drops bricks off in any direction, 180 degrees. around the back and to the sides of the vehicle. 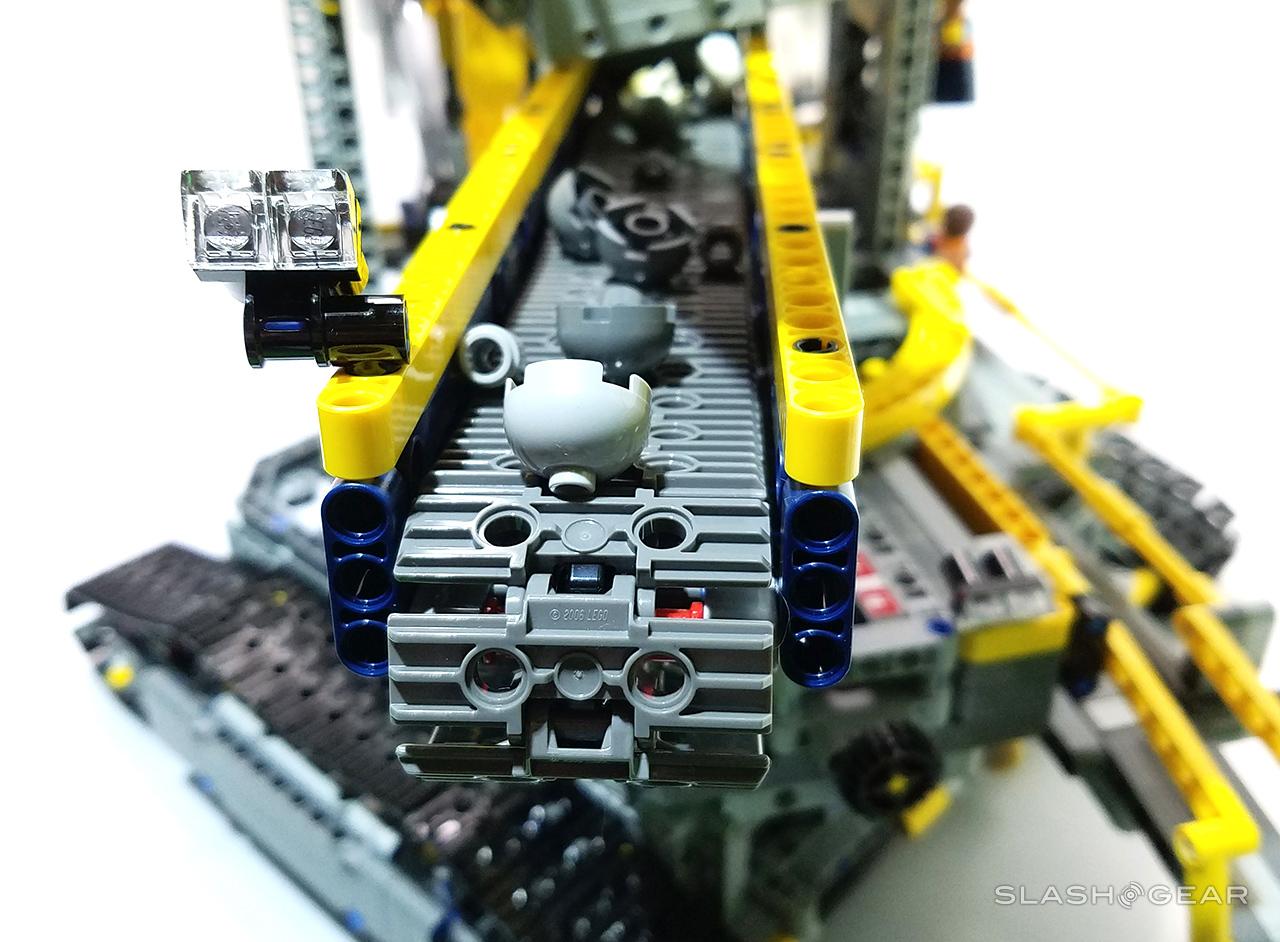 The digging bit is a bit complicated – it doesn’t just pick up masses of bricks with ease. Instead, it’s a situation where the builder has to push pieces near/into the shovels as they rotate. That is, unless they happen to have a very deep pile of bricks that’s forever filling in the area where the shovels pull bricks up.

Note too that the builder will need to dig only bricks within the size ratio given in the bag-o-LEGO-rocks in the set (unlike the digging bit of the video above). The correct bricks are “Round 2 x 2 Dome Tops” for the most part – large enough not to get caught in any cracks, small enough to go down the slide between chutes.

The second conveyer belt moves automatically, but the direction the chute is pointed is controlled manually. The builder can let it move freely, or they can flip a switch (much like the switches at the top of the rig) that’ll keep the chute in one place. 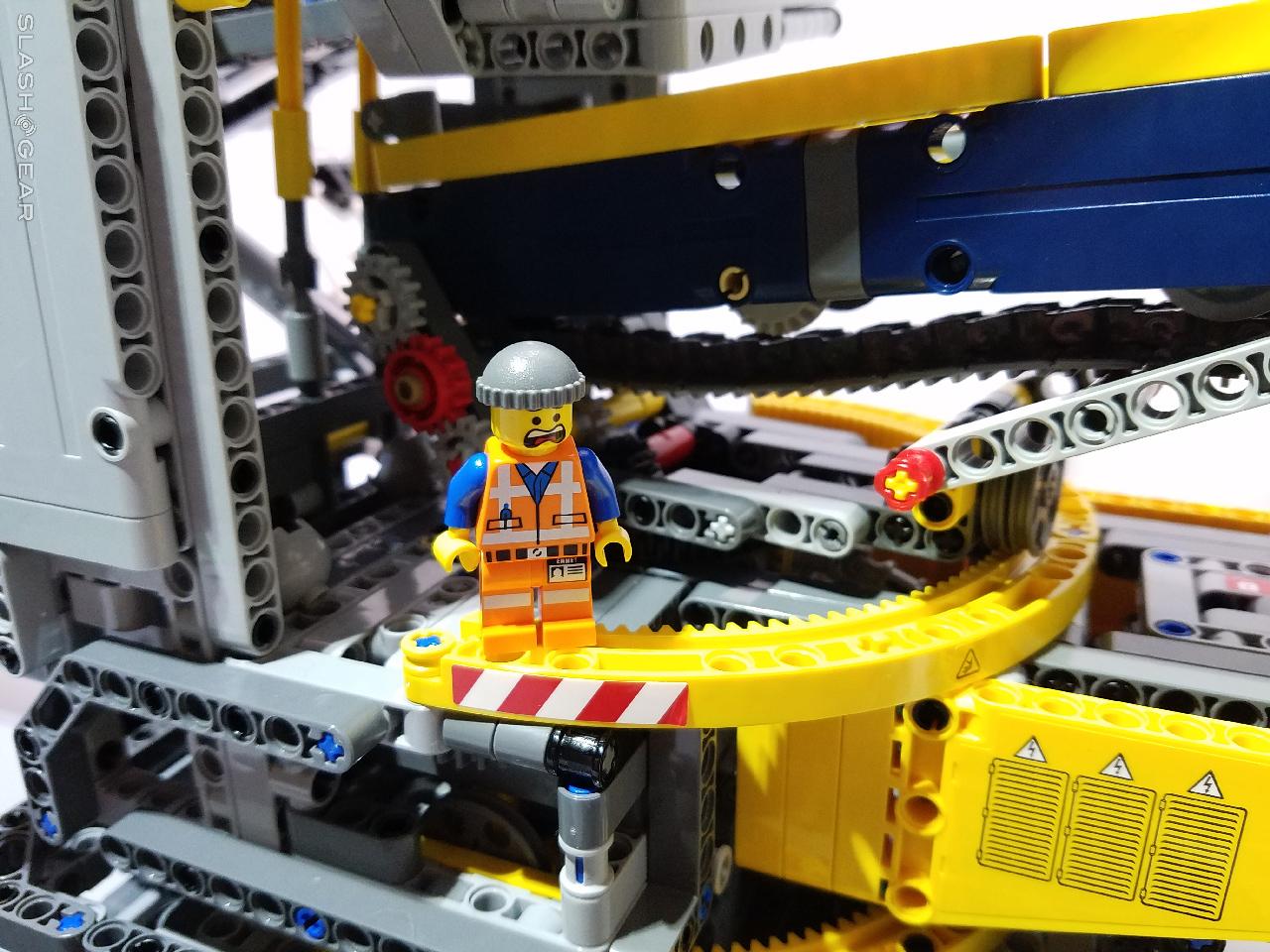 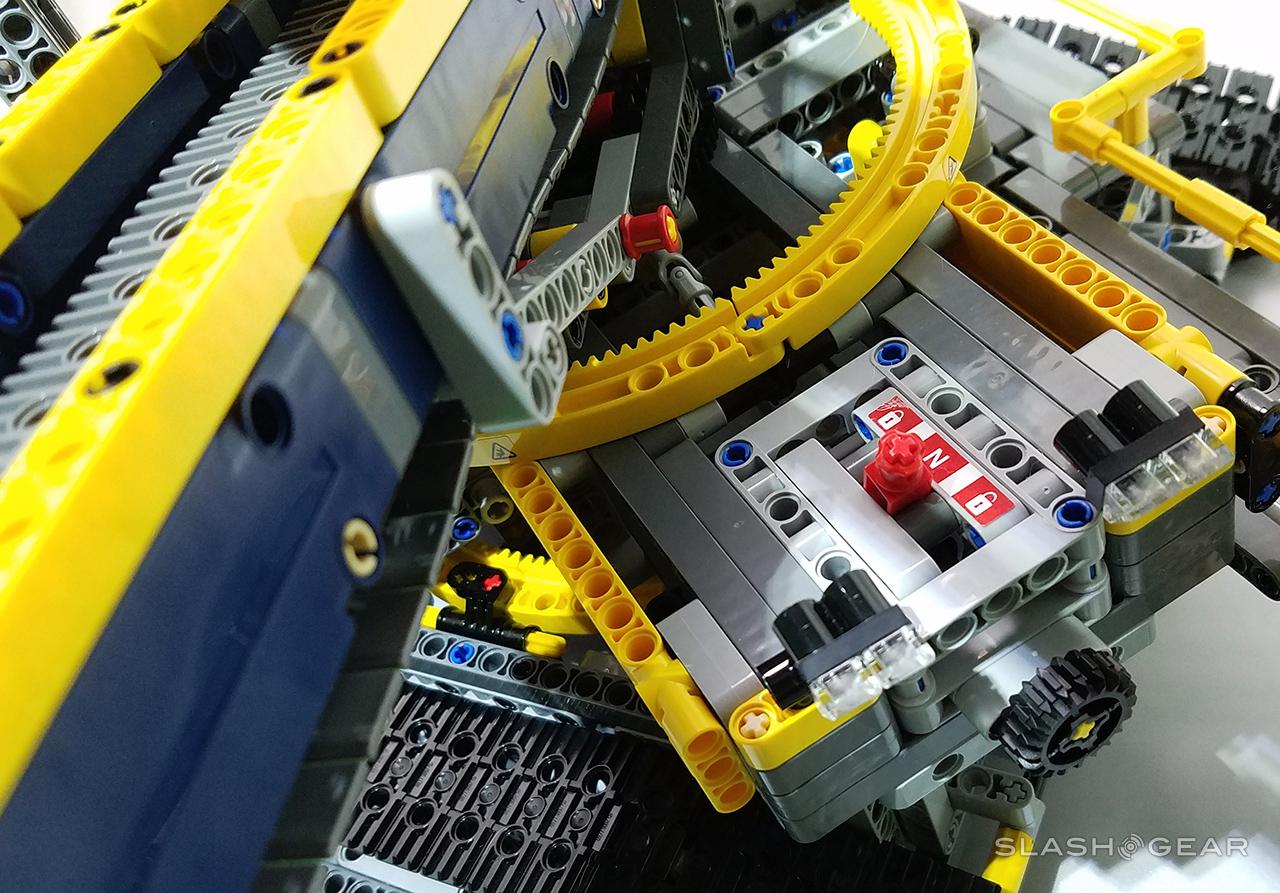 Also in the mix are a variety of little bits that can move – ladders, for example. The top of the driver’s seat console moves as well, so that we can drop our favorite version of Emmet in as we wish.

The crane arm can be lifted and lowered precisely by a set of Technic Linear Actuator pieces included with the set. These arms are not common pieces, by any means. They’re LEGO brick plastic on the outside and metal on the inside, and with the setup the instructions provide, the builder will be turning a tiny wheel connected to these actuators to move the entire crane arm up and down. 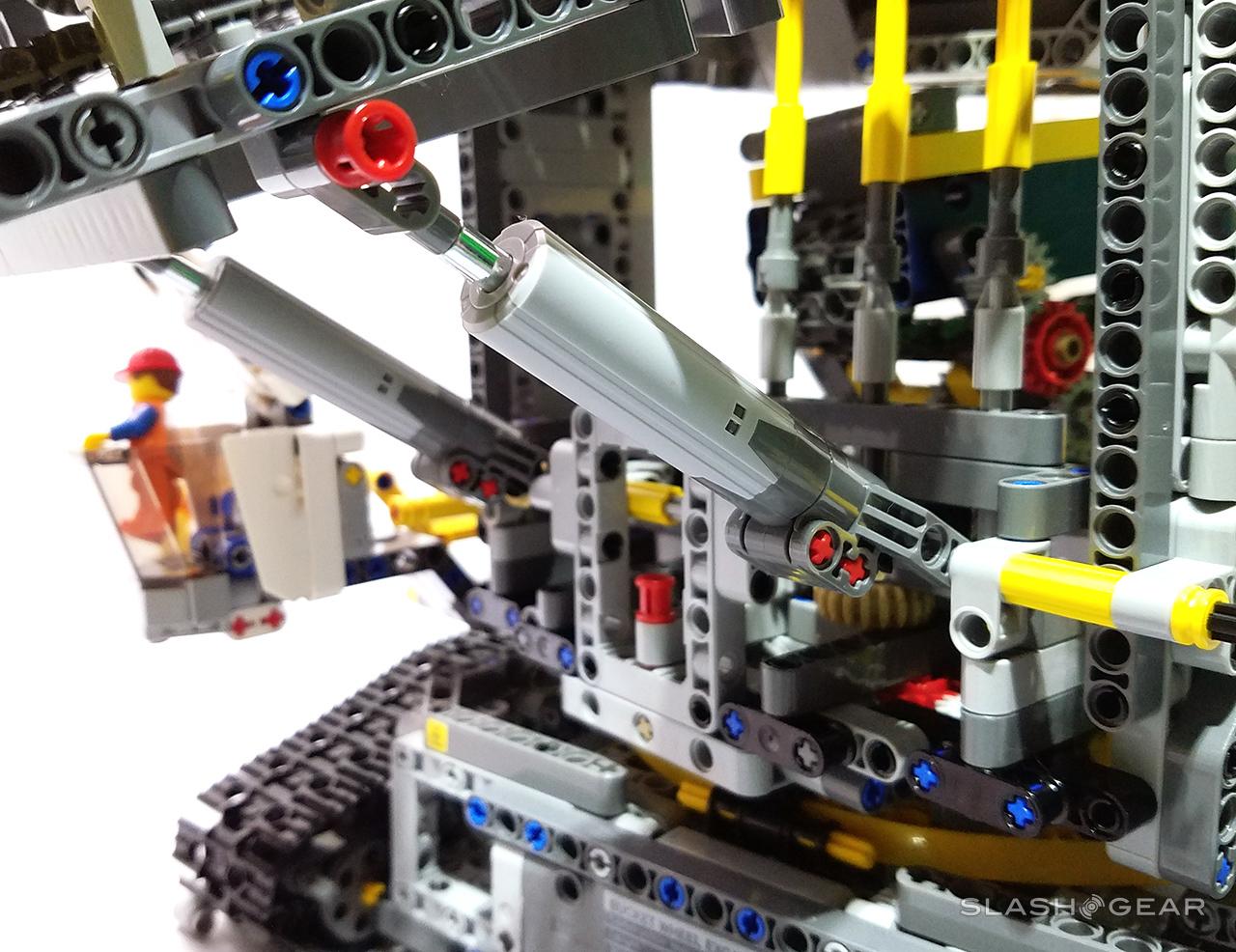 This is just about the only part of the whole build that I believe could be improved upon by an intrepid builder. Employing another battery pack and motor somewhere in the build (good luck) could potentially allow this arm to raise and lower with a switch – but we leave that to them. 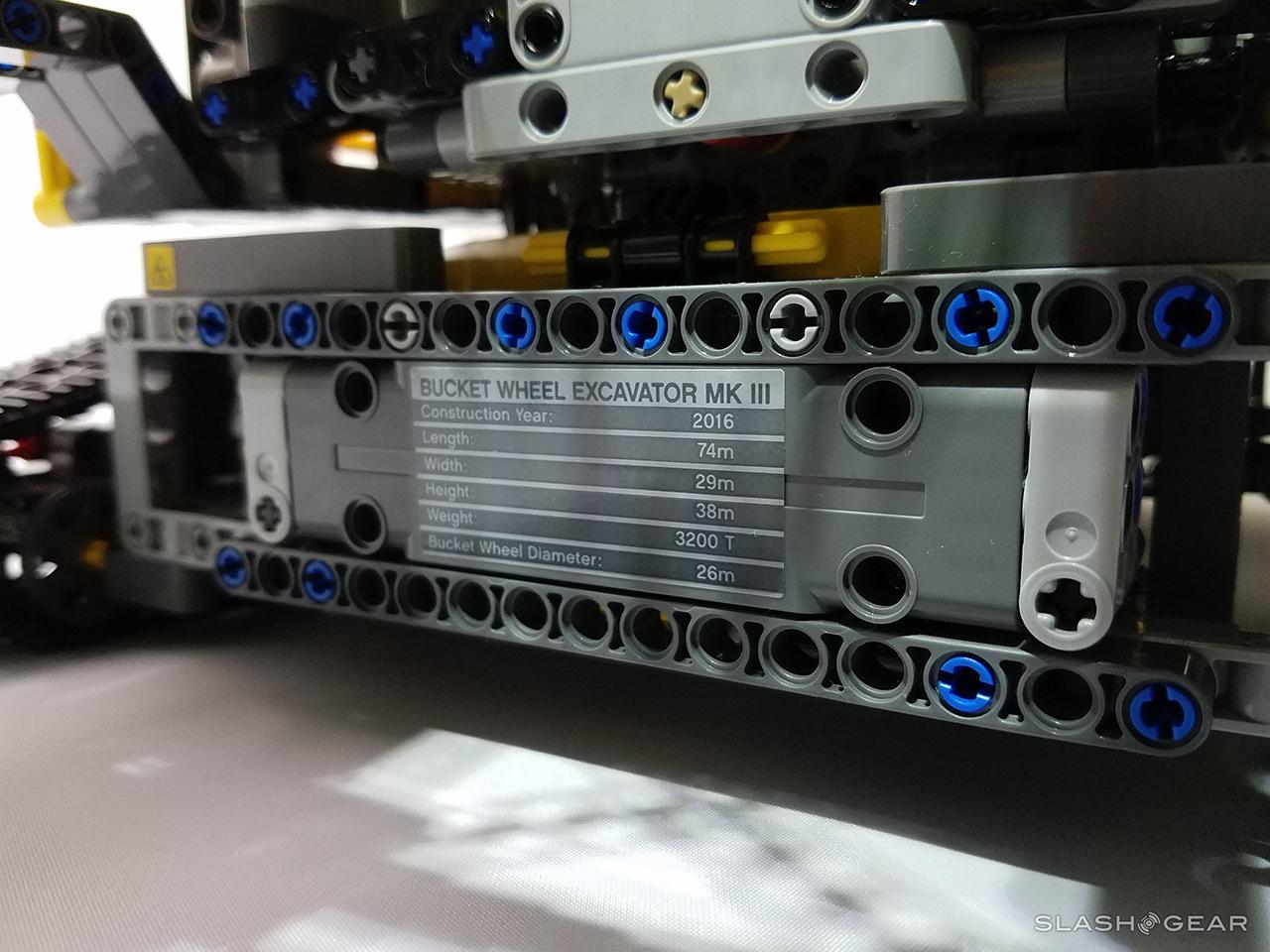 ABOVE: Front bumper with specifications tag for this unique vehicle.

For transport from room to room, this model can be picked up by the handy handle at its top. Easy as can be. 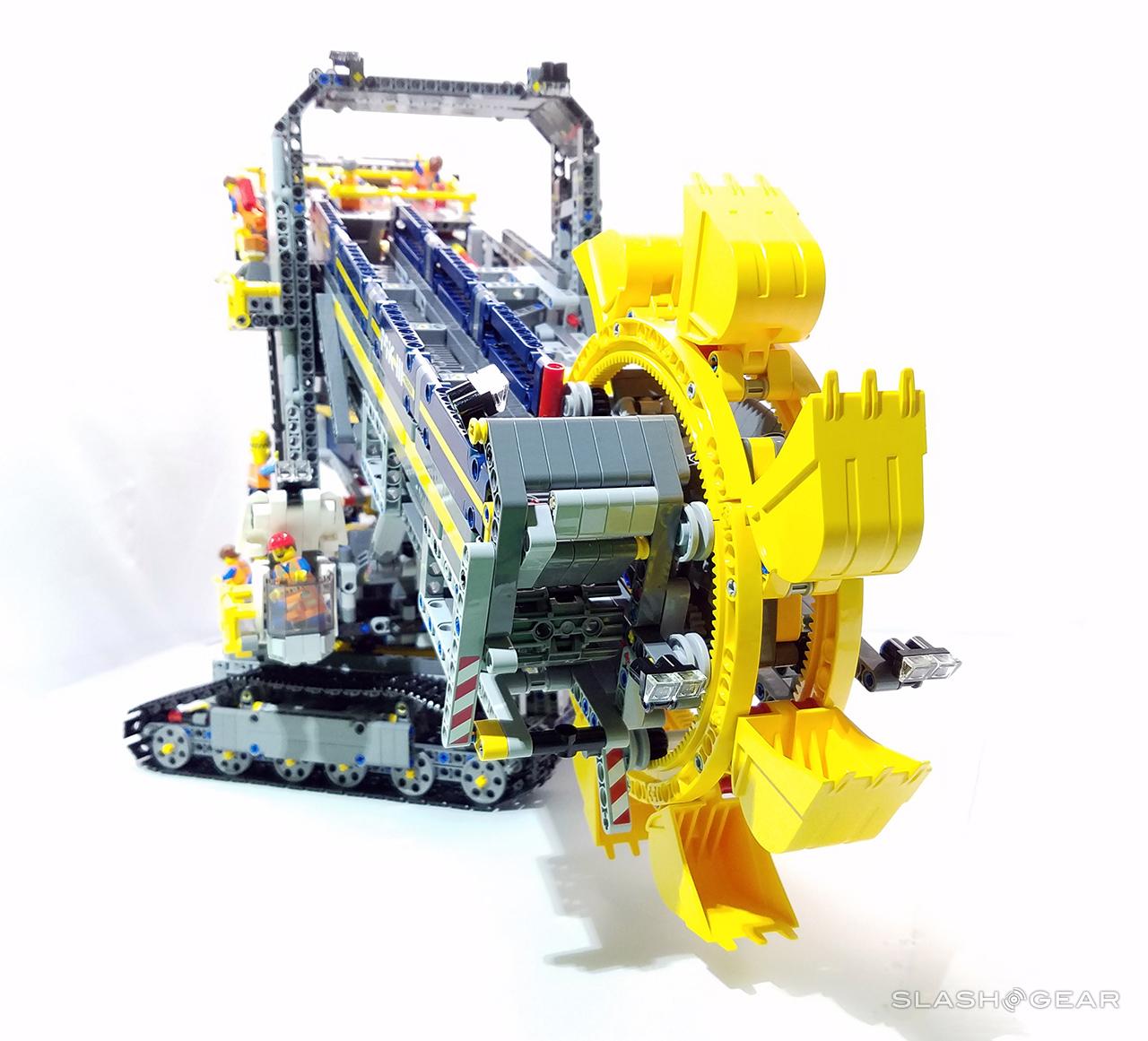 As you’ll see in our original write-up, this model can also produce a dump-truck in addition to the excavator. The excavator can also be taken apart and reconstructed into a Mobile Aggregate Processing Plant. Or a very interested builder could buy TWO sets and put both machines together to work in concert.

This set will take even the most well-seasoned LEGO builder several hours to complete, and is very much worth the cash, time, and effort.