“Data is nice, but understanding is better” Jawbone health platform product manager Andrew Rosenthal tells us, snapping his black UP24 around his wrist. You can’t accuse the former MIT hacker of lacking confidence about either his employer or its product, the wildly successful UP range of fitness trackers now among the best-known wearables on the market. Nor can you doubt his enthusiasm for that data’s potential to amount to far more than a tally of your steps. “Tracking is the data, and that’s really important to get right, but that’s table stakes at this point and we’ve spent the past two and a half years getting that right” Rosenthal points out. “The reason Jawbone’s going to win in this space, the differentiator in the market, is going to be the ability of companies to make sense of the data, to put it in context, and then to help their users actually act on it, and change their behavior.”

Jawbone has new software to announce today, version 3.1 of its core UP app along with a new tool, UP Coffee, which was built by the company’s own staff in its equivalent of “10-percent time” to work on tangental projects. However, it’s the data seething behind that software that has Rosenthal particularly excited, much of which Jawbone is only sharing for the first time today. SlashGear sat down to talk about why context really matters.

Rosenthal joined Jawbone in January 2013, after the company he worked for as chief strategy officer, Massive Health, was acquired by the firm. Since then he’s led the developer program, launched last April, offering third-party apps and services a way to tap into the fitness, sleep, and movement information UP bands are collecting.

“We invested a lot in data: a lot in the understanding and a lot in the acting” Rosenthal told us. “We brought Monica Rogati onboard, she was the head of data science at LinkedIn, she’s built up a phenomenal team. We’ve plucked people out of PhD programs, which is always fun for us, but Stanford I don’t think is the greatest fan of Jawbone right now, but we’ve got a great team as a result.” 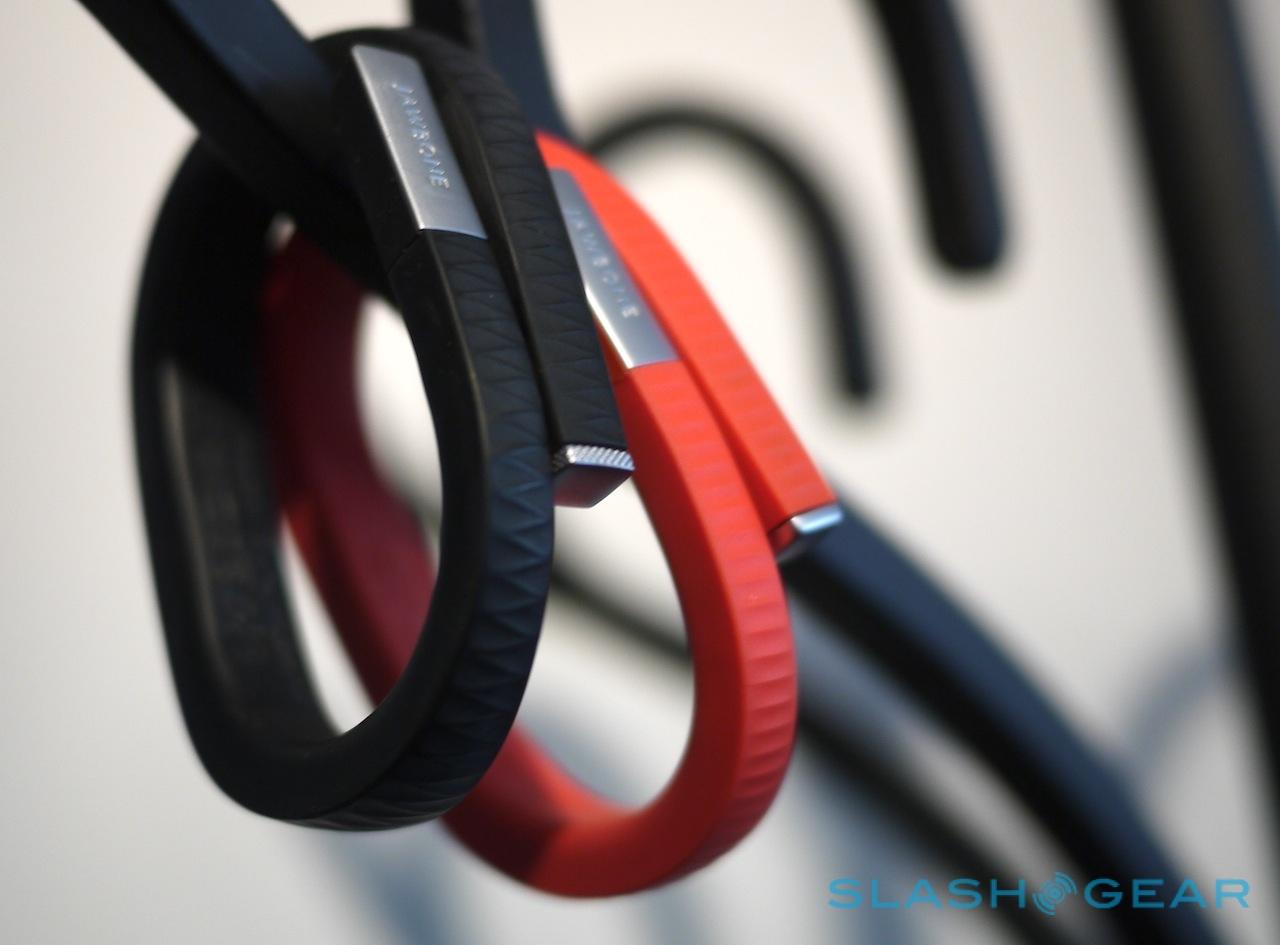 That team has turned its attention to the sort of data analysis that might more commonly be found underway in a university psychology department, only with the benefit of scale that being a well-selling consumer product offers. Recently, for instance, it shared one of its first findings, that people who sleep with a partner get to bed on average 35 minutes earlier than those who don’t. Rosenthal’s team’s challenge was to turn the UP app into a virtual partner to deliver the same benefits to anybody sleeping alone.

“We didn’t just share that research, we actually productized it” Rosenthal says. “We asked ourselves, how can we build it into the product in a way that helps nudge people, taking what we saw in real life? Taking what we saw in the data, knowing that if you have someone say at the right time “hey, are you coming to bed right now, or are you going to stay up and work?” we figured, can we latch on to that from a technology standpoint? And we used the “Today I Will” challenge as a very lightweight nudge that leveraged the best of the research around having someone ask you.”

“Today I Will” challenges are the pop-up messages in the UP app which set users an optional goal, whether that be raising their number of steps, getting to bed by a certain time, or drinking more water. They’re optional – users can choose to accept the challenge or dismiss it – but they’re central to how Rosenthal intends to leverage its understanding of user behavior and affect meaningful change.

“At Jawbone we’re able to nudge people, and we’re able to get people to change their behavior” he says. “Our firm belief is that it’s not about going to the gym once, or twice, or three times a week. What really matters for behavior change is the thousand little decisions that add up into lifestyle. And that’s what you’ll see us focusing on.”

When it came to making a caring virtual boyfriend or girlfriend out of an iPhone app, Jawbone started simple. The company reserved a control group, and then took a second set of UP wearers and sent them a “Today I Will” challenge to go to bed on time. “We found that, of those who accept the challenge, 72-percent are more likely to get to bed by their bedtime, and that corresponds to an additional 23 minutes of sleep” Rosenthal reveals.

What sets Jawbone’s study apart is the size of its sample sets. “No-one else is doing it. No-one else has results that are this clear and concise” Rosenthal boasts, clearly happy with his team’s findings. “And what no-one else has is the size and the scale.”

“I came from the academic world; we did studies on 50 people, we did studies on 300 people. 300 person academic study: hundreds of thousands – if not millions – of dollars in grant money, lots of staff, and you get a great peer-reviewed article out of it. What we’re doing here is on 40,000 people. It’s unprecedented in scale, and this is just the first example we’re sharing about the type of work we’re doing.” 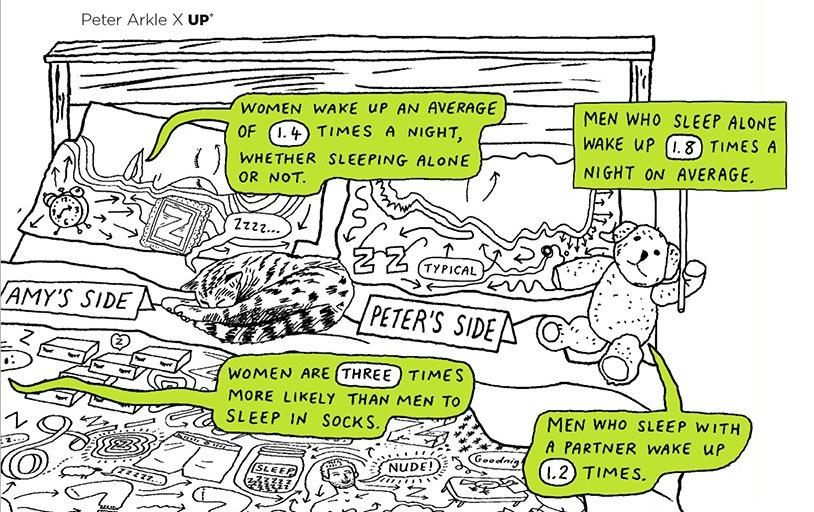 Another quietly took place on Thanksgiving 2013, with Jawbone testing out a theory that it might be able to nudge users out of their turkey-day rut. “We looked at the data, and realized that the Thursday of Thanksgiving, people tend to have really bad days health-wise” Rosenthal told us. “People tend to not move very much. They tend to fall off their average, because they’re sitting around, they’re watching TV, they’re talking to family and friends.”

Again, after separating out a control group, Rosenthal’s team sent out a “Today I Will” message to another set of UP wearers, warning that while they might normally expect a decent number of steps on the average Thursday, Thanksgiving was likely to scupper that.

“There’s no alarm clock, there’s no-one hitting you over the head, it’s really passive, it’s really easy. And people opt in. And for those who opt-in – 24-percent of our users did – they took an average of 1,400 steps more that day” the health chief confirmed. “So what’s exciting about this is that it’s evidence of the ability to use precise data, to the right person at the right time, to get them to change their behavior in a meaningful way.”

Jawbone’s data-heavy conclusions undoubtedly have appeal to hardcore life-hackers, but the company’s challenge is making them palatable to the mass market, too. It’ll do that using “Insight Cards”, which flag up chunks of personalized data, links to scientific articles, and other factoids within the app, parsing them into something more readily absorbed even for those without a statistics degree.

“You could go get this information on your own, piece it together, but we put a lot of effort into figuring out what do we bring to people at the right moment so they can actually stay engaged and change their behavior” Rosenthal says. There’s also an emphasis on social interaction, with achievements and Insight Cards being sharable through email, Twitter, and other social networks. That’s turned out to be even more popular than Jawbone initially expected, though as Rosenthal points out, “we designed for engagement from the very beginning.”

Right now, the Health Platform team is particularly focused on sleep, an area that Rosenthal argues has been under-capitalized even with the recent push in wearable tech. 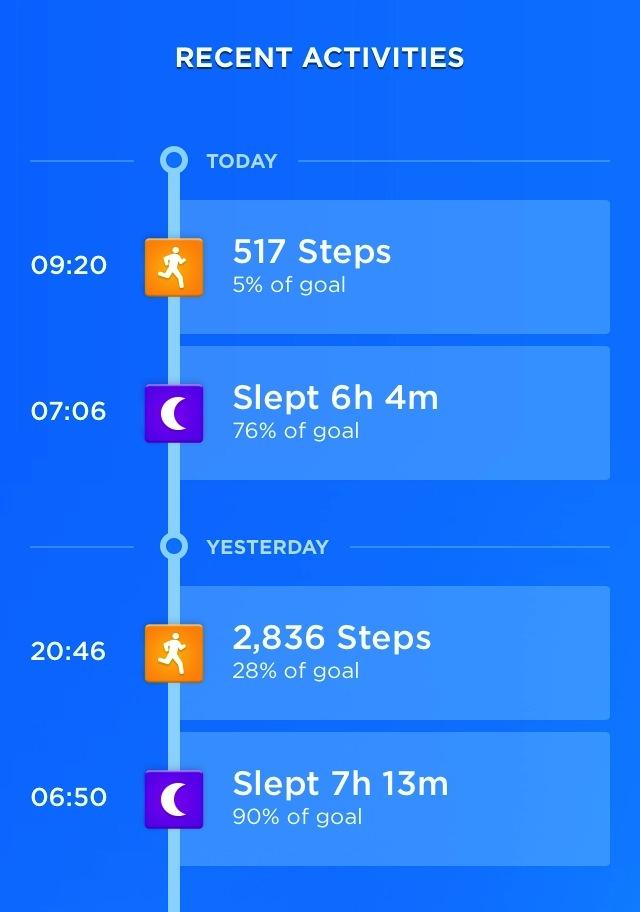 “The reason we’ve gone deep on sleep is because it was previously unknowable” he explains. “We had people buying the UP saying “I want to understand my sleep patterns, I want to sleep better.” It’s fascinating, but there’s not been a lot of ability to personalize the data in the past, because no-one knew how they slept, and there was no product or service out there to help you understand sleep-related behavior.”

Those behaviors have included things like having higher levels of the hormones that make you feel hungry in the morning after a night of poor sleep, and that those who don’t rest well at night take on average fewer steps the next day. Sleep scientists knew that, but Jawbone didn’t have a way to personalize that within its product.

Analyzing the masses of data aggregated from UP and UP24 wearers has given them a place to start, however. For instance, the Health Platform team combed through the raw 2013 sleep data for any anomalies, and then compared them to the calendar to see if there was a clear potential reason for the disruption. Surprisingly, there were some very obvious links to real-world events.

At the time of the Boston marathon bombing, for example, people in Boston lost on average 19 minutes of sleep. Those who lived in Cambridge or Somerville, where a police officer was fatally shot, lost an additional 30 minutes the night of the shoot-out, in addition to spending an extra 15 minutes of time in bed but awake. 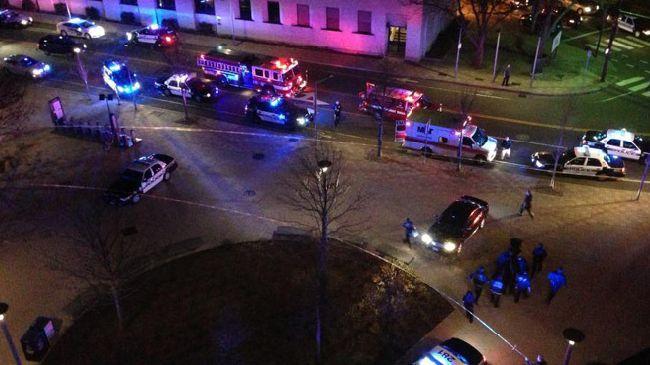 On the night the suspect was captured, meanwhile, those in the Cambridge and Somerville communities got on average 24 minutes of extra sleep. Jawbone saw similar spikes in sleep activity at the same time of President Obama’s inauguration, the election of new Pope, and on the day of the 2013 FIFA Confederations Cup in June.

How do you convince people that sleep deserves consideration? You tell them they’re sexy. Rosenthal looked at around 5,000 nights of sleep across 1,600 UP users, hunting for possible value-metrics the app could feed back to them and encourage them to prioritize their time in bed.

He discovered that those of sleep seven hours or more a night wake up with more energy, report that they’re more focused, and – most surprising – 24-percent say they feel more attractive.

That, Rosenthal says, is the hook Jawbone needs. “We’ve figured out what triggers that feeling of waking up and feeling more attractive” he explains, and it’s that positive reinforcement that the UP app will begin to offer through Insight Cards and “Today I Will” challenges.

Even with new data behind it, the idea that we should sleep more isn’t new. Jawbone is realistic that UP users aren’t suddenly going to start drinking warm milk at 9pm and be tucked up under the covers fifteen minutes later.

The answer is quality, and the idea that while people aren’t necessarily going to fit in more sleep, they could fit in better sleep. 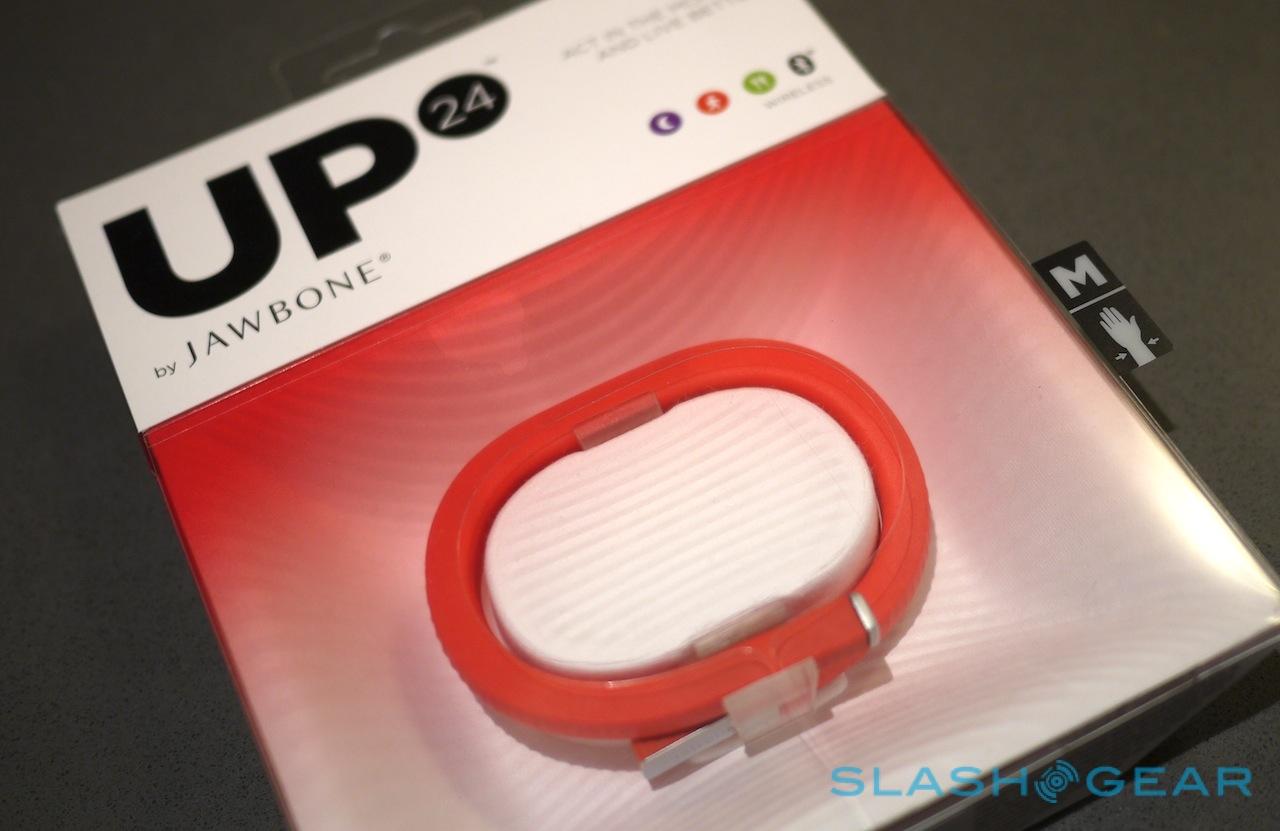 “We zeroed in on something that’s relatively new, we call it “Sound Sleep”” Rosenthal explains. “And Sound Sleep is when you’re in bed, you’re asleep, and you’re not moving around: it’s that type of sleep that really matters, and it matters when you look at our research because people who have four hours or more of Sound Sleep wake up feeling more optimistic, more patient, and more focused.”

“It’s all about optimization” Rosenthal concludes. “Ot’s about figuring out “what is the best I can get out of this period of time I can dedicate to sleep?””

The numbers may be surprising, but the data-crunchers inside Jawbone say that they’re only really getting started on figuring out what their mass of users is telling them. The heavy lifting is going to go on behind the scenes, of course; for the average UP and UP24 wearer, it’ll only show itself in the cards and challenges that the app occasionally offers them.