Jaguar Land Rover has developed an innovative hydrogen fuel cell vehicle (FCEV) based on the new Defender. The prototype will begin testing later this year and proves Jaguar Land Rover’s commitment to achieving zero tailpipe emissions by 2036. Additionally, the automaker is making an ambitious plan of delivering net-zero carbon emissions across the supply chain, products, and operations by 2039.

“We know hydrogen has a role to play in the future powertrain mix across the whole transport industry, and alongside battery electric vehicles, it offers another zero tailpipe emission solution for the specific capabilities and requirements of Jaguar Land Rover’s world-class lineup of vehicles,” said Ralph Clague, Head of Hydrogen and Fuel Cells, Jaguar Land Rover.

The vehicle is a functioning testbed to understanding how hydrogen powertrains can meet or surpass the requirements that buyers expect from a Land Rover. The factors include range, towing, off-road capabilities, fuel consumption, and refueling. 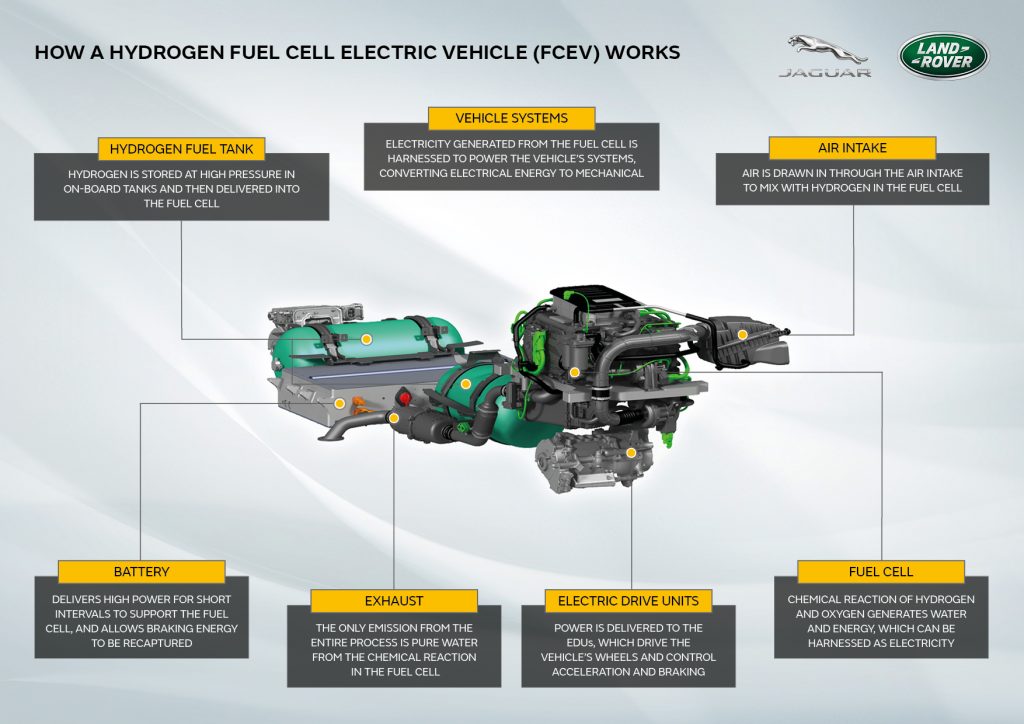 “The work done alongside our partners in Project Zeus will help us on our journey to become a net-zero carbon business by 2039, as we prepare for the next generation of zero tailpipe emissions vehicles,” added Clague.

Perhaps the most significant advantage of FCEVs over BEVs (battery electric vehicles) is refueling. In a typical EV, you need a DC fast charger to avoid the long waiting times in recharging the battery, and it’s still not fast enough at around 20 to 30 minutes on average – not to mention how fast-charging significantly degrades the battery when done repeatedly.

On the other hand, a hydrogen fuel cell vehicle (like the Toyota Mirai) functions similarly to a typical car. There are onboard tanks to store high-pressure hydrogen, and it mixes with air inside the fuel cell. The reaction creates electricity and powers the electric drive units to turn the wheels. The system also has a large battery to support the fuel cell while recapturing the energy from braking. The only emission produced by the reaction between hydrogen and air is water.

Best of all, refueling with hydrogen only takes a few minutes and not half an hour, which also means FCEVs are ideal for cross-country driving over longer distances. Also, the higher-density nature of hydrogen allows it to deliver reliable power in both extreme hot and cold weather.

However, the success of hydrogen fuel cells relies on one obvious thing: Refueling stations or the lack of it. According to the International Energy Agency (IEA), the number of FCEVs on the entire planet nearly doubled in 2019, with the United States leading the charge.

Meanwhile, sales of hydrogen FCEVs are forecasted to reach 10 million by 2030. And by then (fingers crossed), there will be close to 10,000 hydrogen refueling stations worldwide. Researchers and engineers work tirelessly to bridge the gap between ‘green hydrogen’ production and total sustainability, but hydrogen remains an environmentally friendly alternative to dinosaur juice despite current limitations.