The first thing I did with the 2020 Land Rover Defender 110 was get over my guilt that I didn’t have some grand, off-roading adventure planned. Well, to be fair that was the second thing: first was pausing to appreciate just how handsome the SUV this storied nameplate is attached to is, as it makes its long-awaited return to North American shores.

It’s been 23 years since Land Rover officially offered the Defender in the US and Canada, the SUV a double victim of safety regulations that were increasingly expensive to satisfy, and the automaker’s own decision to prioritize the more lucrative Discovery and Range Rover. In the 2+ decades since then, of course, utility vehicles have gone on to dominate the market. When it came to redesigning the Defender, Land Rover couldn’t afford to ignore this side of the Atlantic. 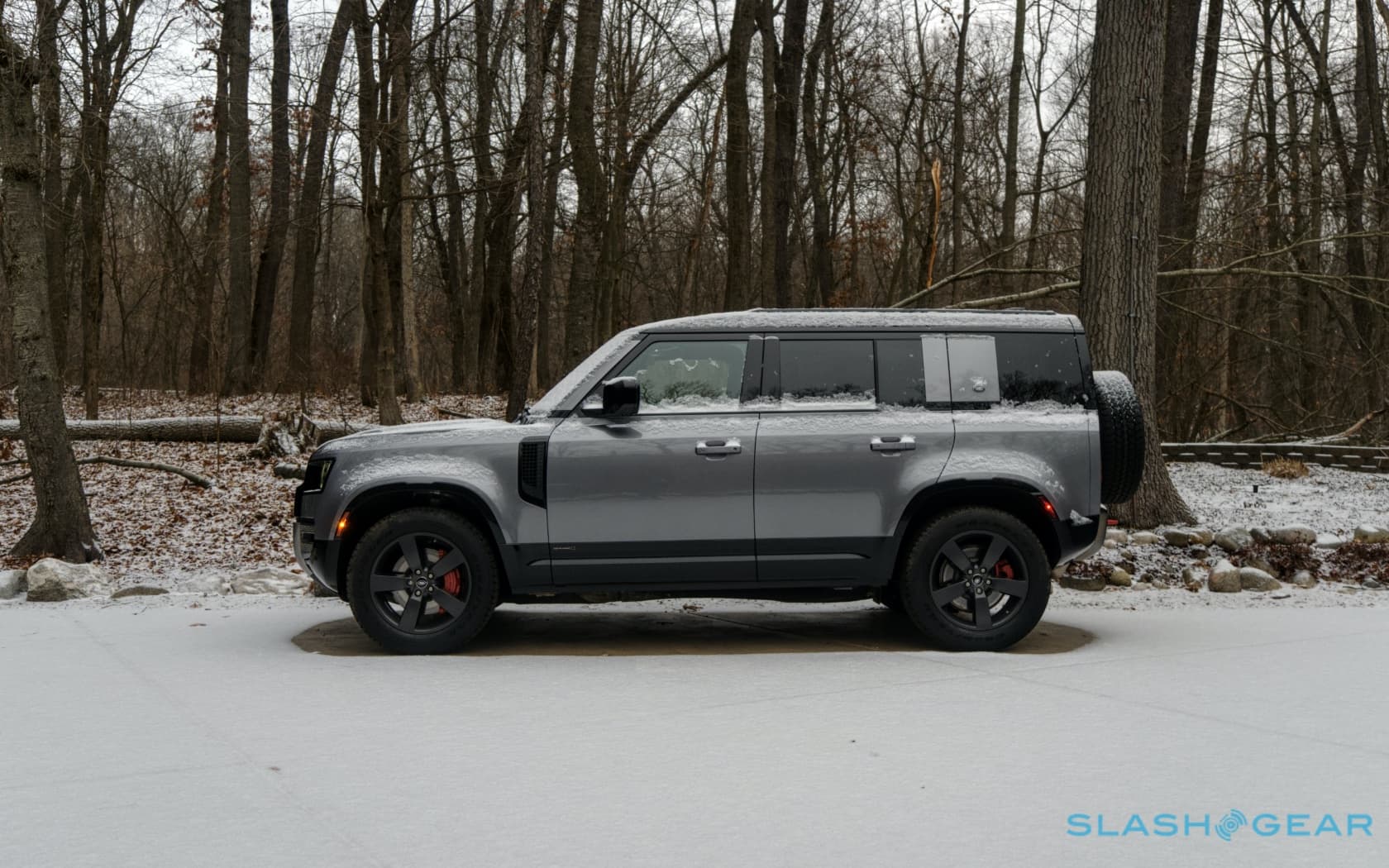 As with other rebooted icons, however, figuring out how to drag the Defender into the 21st Century proved a challenge. Those same alluring sales figures for SUVs come with a far broader audience to satisfy. It’s one which quite frankly doesn’t need the off-roading talents that were once essential to SUV buyers, and moreover won’t compromise on driving dynamics because of those abilities. 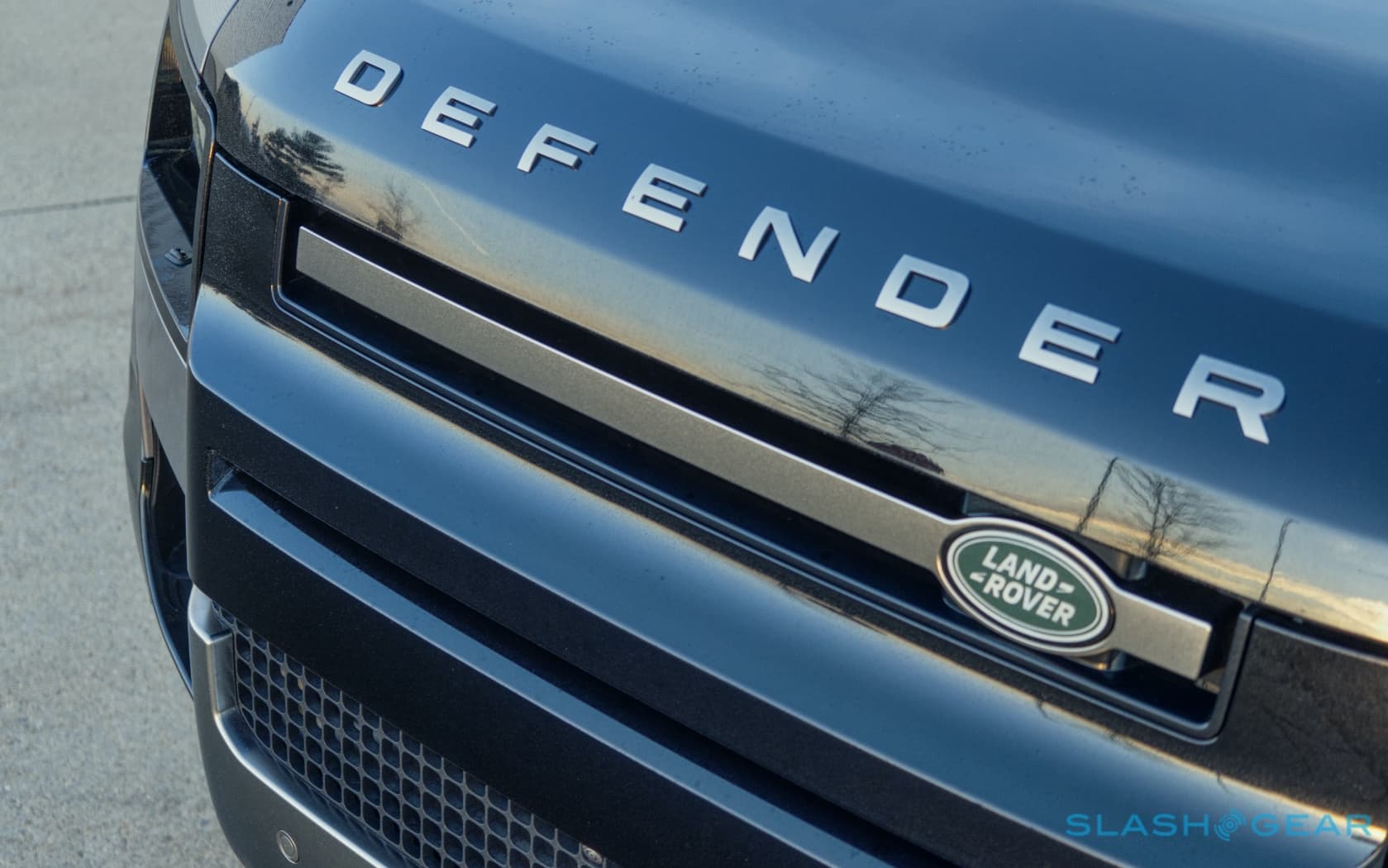 The result is, like most of the best reinventions, controversial and memorable. The 2020 Defender has softened in its edges but has no less presence for it. Distinctive cues like the circular headlamps, Alpine windows in the roof, and the side-opening tailgate with its spare wheel are a nod to the past, sitting alongside more sculpted arches, crisp LED taillights, and plenty of curb presence. 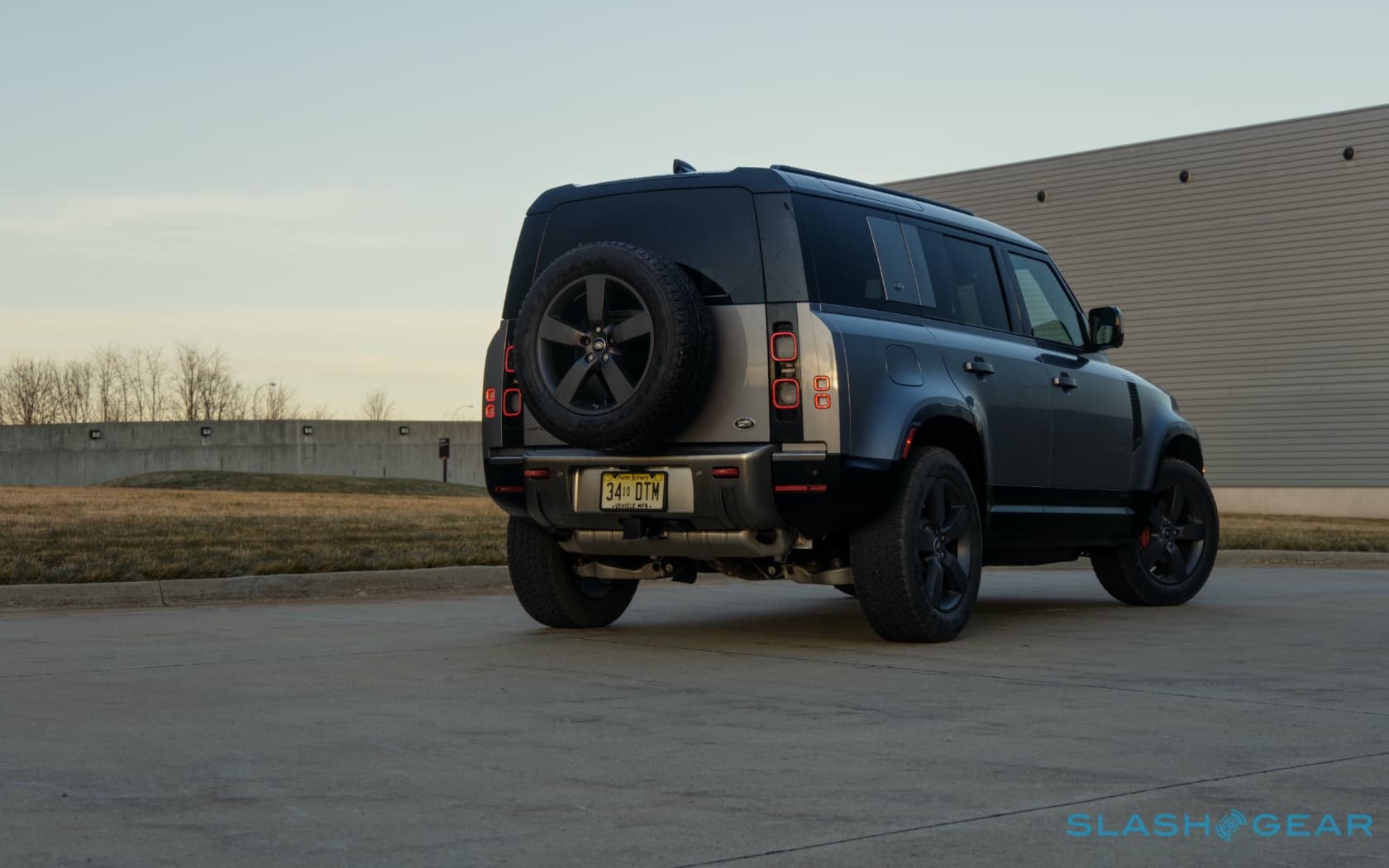 I think it looks tremendous, and while Land Rover’s palette of toned-down greens, browns, grey, and silvers aren’t exactly bold, they let the distinctive two-tone finish speak for itself. For the moment the five-door Defender 110 is the only model in the US, but 2021 will bring the Defender 90 with two doors and an even more rakish look. The Eiger Grey of my review car turned heads, repeatedly, drawing attention from pickup and SUV owners alike.

Land Rover offers two engines, starting with a 2.0-liter P300 twin-turbocharged inline-four with 296 horsepower and 295 lb-ft of torque. That does 0-60 mph in 7.7 seconds. The upgrade is the 3.0-liter P400 inline-six mild-hybrid, with 395 horsepower and 406 lb-ft of torque. It trims the 0-60 run to in 5.8 seconds, but despite being bigger actually gets better fuel economy numbers. The EPA says the P400 should do 17 mpg in the city, 22 mpg on the highway, and 19 mpg combined: not amazing by any stretch, but achievable in practice. 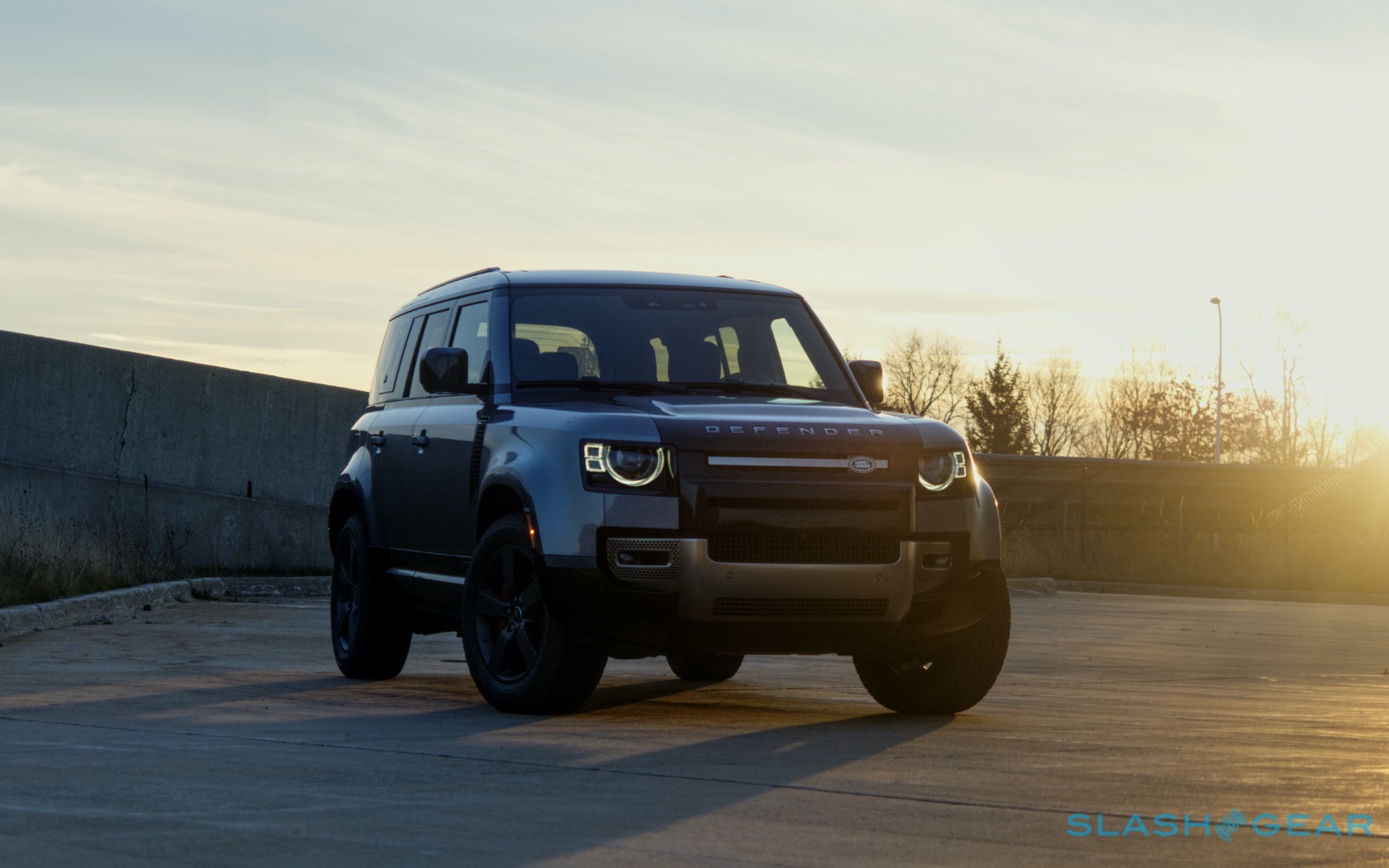 My top-spec Defender X – optioned out to a hefty $86k – came with the P400 as standard, and it’s well suited to the SUV’s manners. It doesn’t feel exactly over-powered on the road, but it’s responsive and has plenty of low-end torque that arrives in a pleasing and reliable surge. The 48V mild-hybrid system helps smooth out the stop/start system, too.

All-wheel drive is, unsurprisingly, standard, and Land Rover adds locking differentials as well. Underneath, the big change – and among the most controversial – is a switch from body-on-frame to a unibody platform. Purists may scoff and wave their arms in fury, but it just plain makes more sense for an SUV expected to handle asphalt as well as it does rougher terrain. 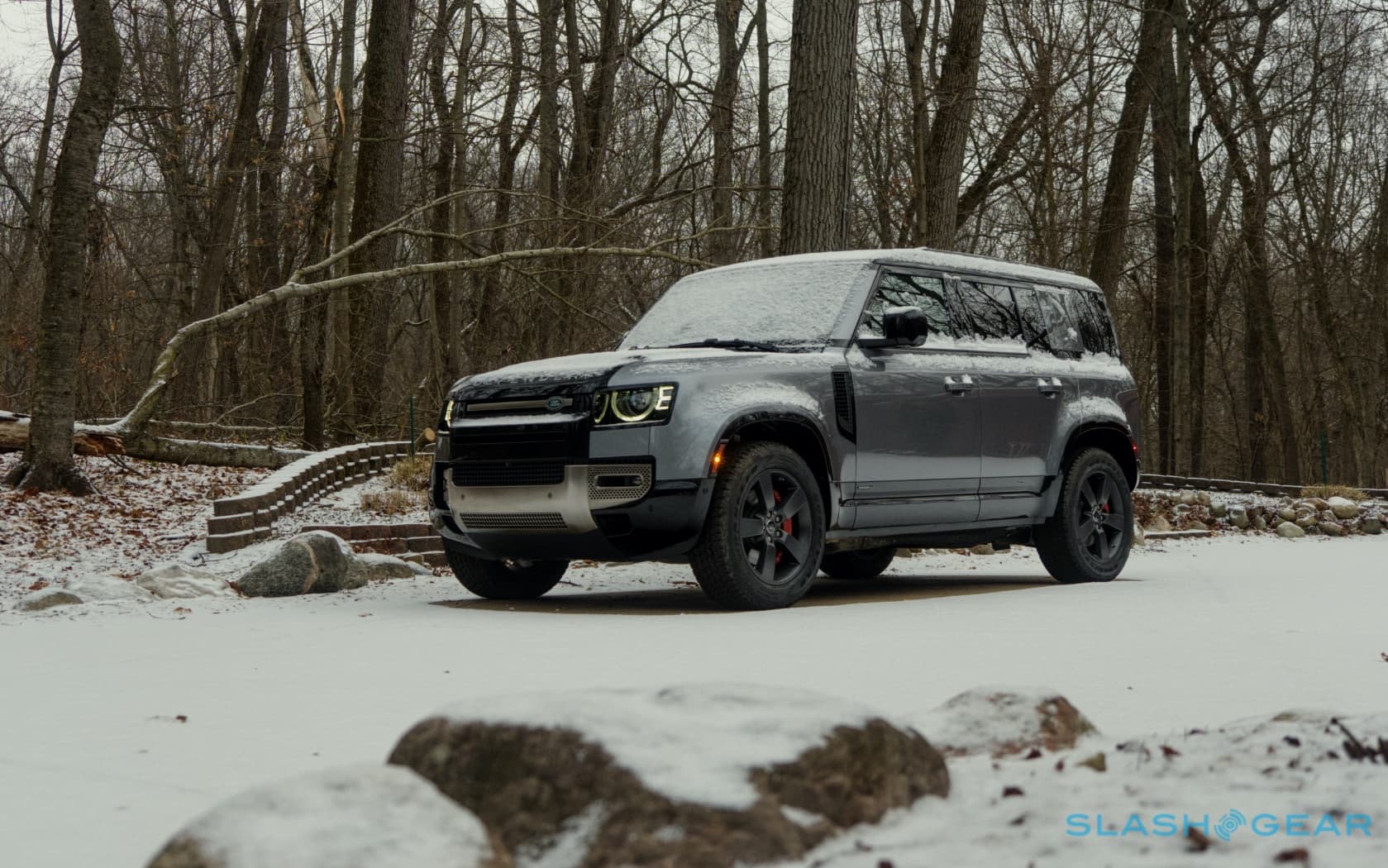 Gone, too, are the solid axles, replaced with fully independent suspension. That uses air suspension with adjustable ride height, too. It’ll lift to up to 11.5-inches of ground clearance, and wade through up to 35.4-inches of water.

Were I one of those purists, here’s where I’d talk about how I led the Defender on an uncompromising overlanding adventure packed with perilous cliffs and inclines fit only for mountain goats. Let’s face it, though, the majority of Defender buyers will be sticking to regular roads most of the time, and likely only setting the SUV’s Terrain Response drive mode to its sand or rock crawl settings by accident. Higher-spec Defender trims get Terrain Response 2 with an intelligent Auto mode, which promises to pick the transmission, suspension, and traction settings for you. 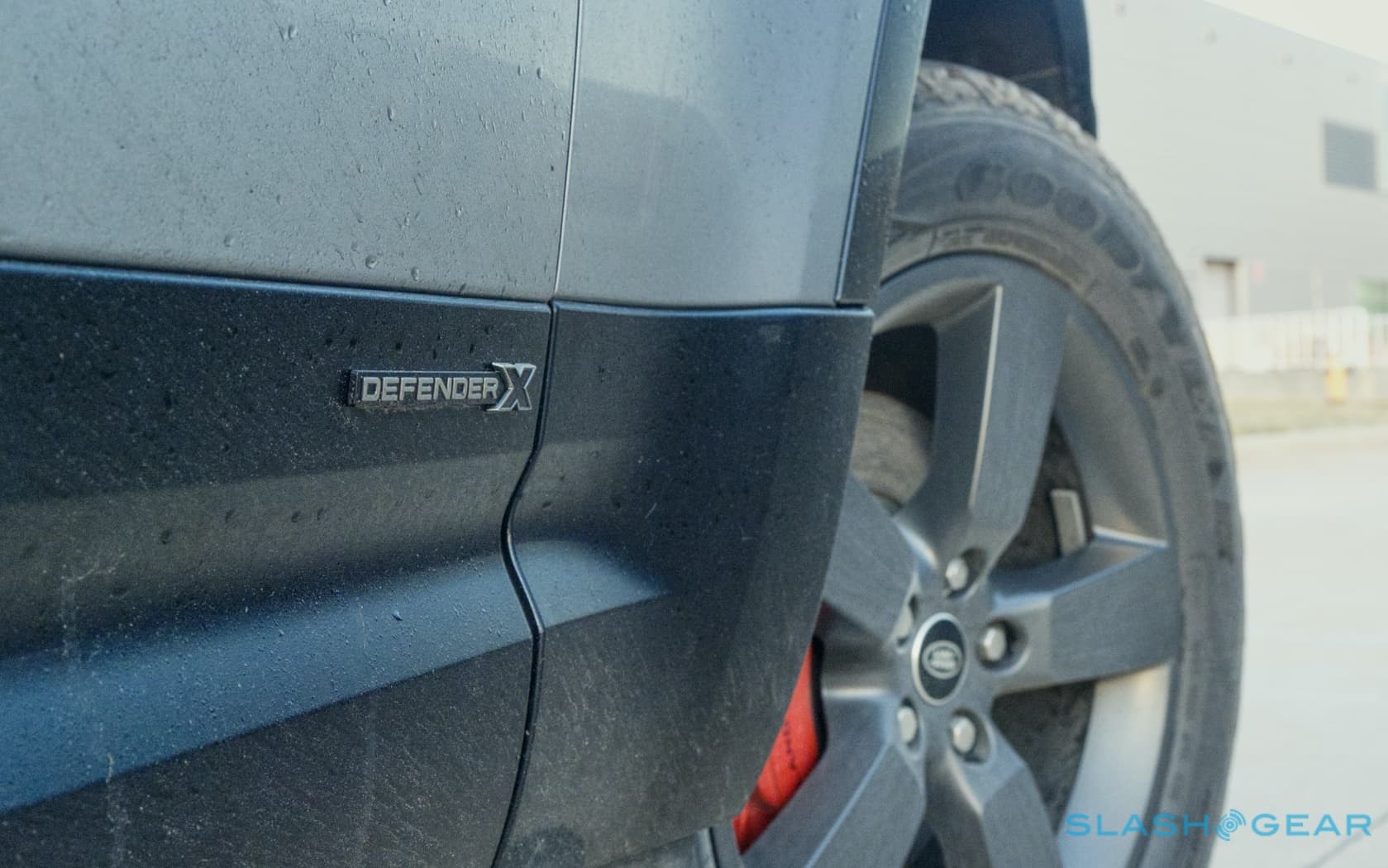 I may not have challenged myself with the Midwest’s equivalent of Mount Kilimanjaro, but the Defender did get to show its merit on some snow and ice, conquer unpaved and deeply rutted roads with aplomb, and tackle the arduous twists and turns of the grocery store parking lot. The latter demonstrated the worth of the standard 3D Surround Camera feature, which goes one step better than most bird’s eye view systems by magically showing you what’s actually underneath the SUV.

Blind spot assistance, cruse control, lane-keeping assistance, rear traffic monitor, traffic sign recognition, and the clear exit monitor come standard, too, even on the $50,500 (plus $1,350 destination) base Defender. The Defender X-Dynamic adds a camera-based rear view mirror, too, while the Defender X trim throws in a head-up display too, among other things. 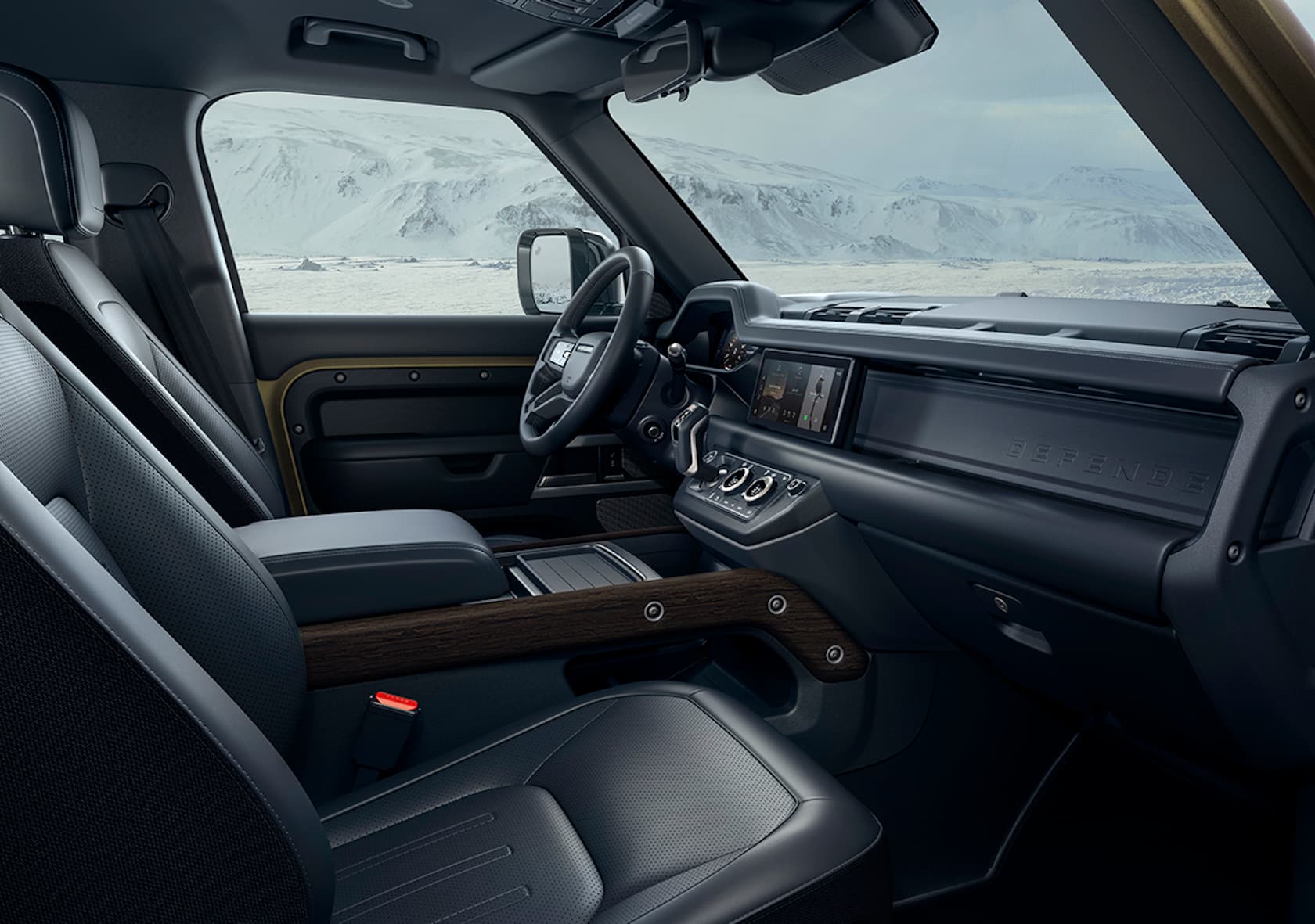 There’s a sense of burly sophistication when you settle in at the wheel, and happily the Defender lives up to that first-impression. You can cruise along comfortably and fool yourself into thinking you’re in a Range Rover, but it’s equally confident at making you feel invincible in bad weather, on ice, or when the state of the road surface really ought to be shaking out your teeth. While it has plenty of presence, too, it’s actually shorter than a Ford Explorer, and the slab-sided aesthetic means it’s not too tricky to figure where the edges are in tighter spots.

As for the cabin, that blend of practical and plush continues. Land Rover’s fully digital instrumentation is standard on the Defender X-Dynamic and up; the base car gets analog gauges flanking a center display. A 10-inch touchscreen for the Pivi Pro infotainment system is standard, along with Android Auto, Apple CarPlay, SiriusXM, and wireless phone charging. The Defender X-Dynamic adds a Meridian sound system, too, along with tablet mounts and USB charging ports for the rear passengers. 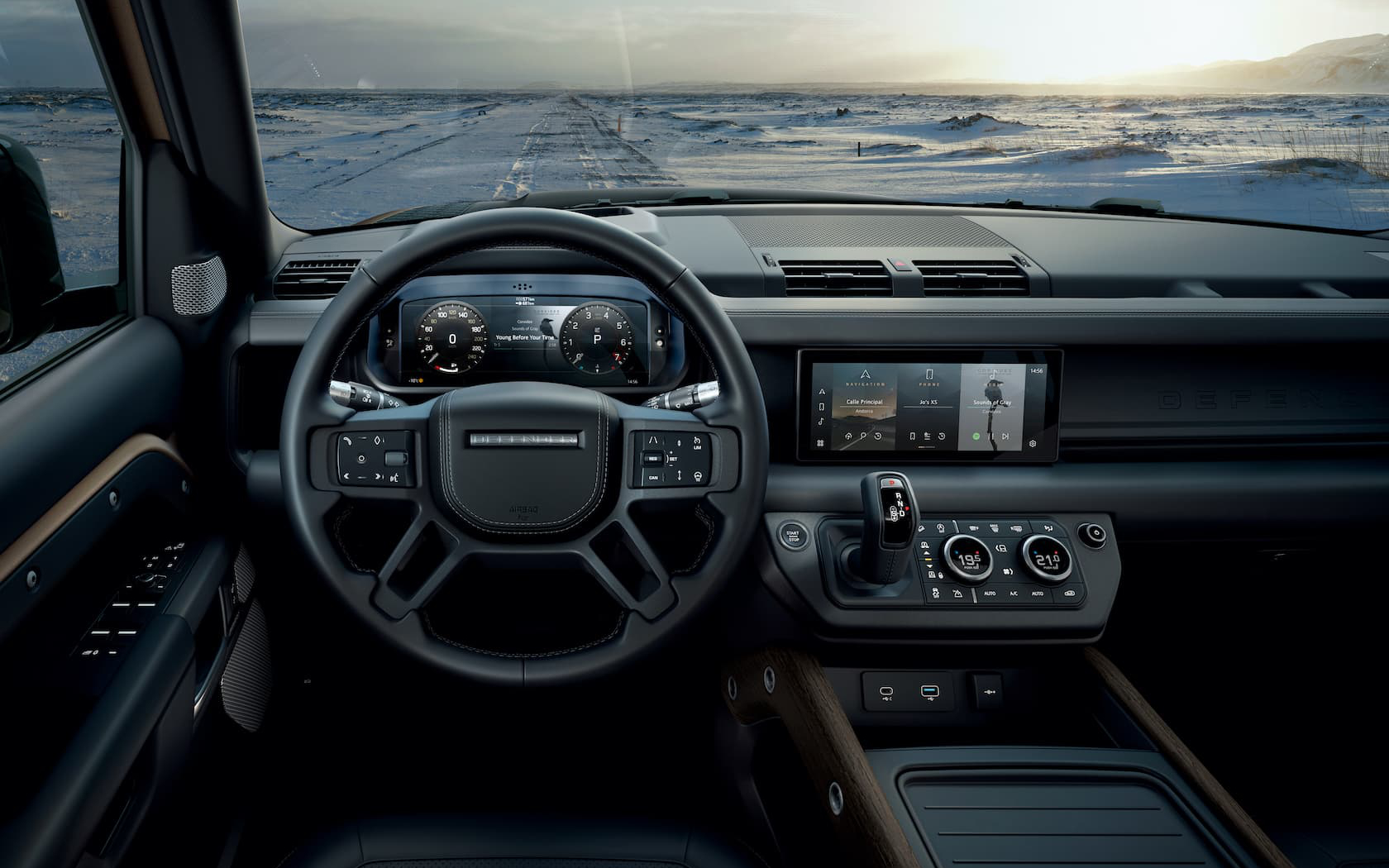 Were I actually planning on off-road pursuits, I’d probably stick with the base SUV’s fabric trim too; X-Dynamic trim adds leather, and the Defender X gets even nicer hide with an extended package. Regardless of trim, there are plenty of cubbies, storage nooks, and rubber-lined trays ideal for holding phones, headphones, stray GoPro cameras, and more. 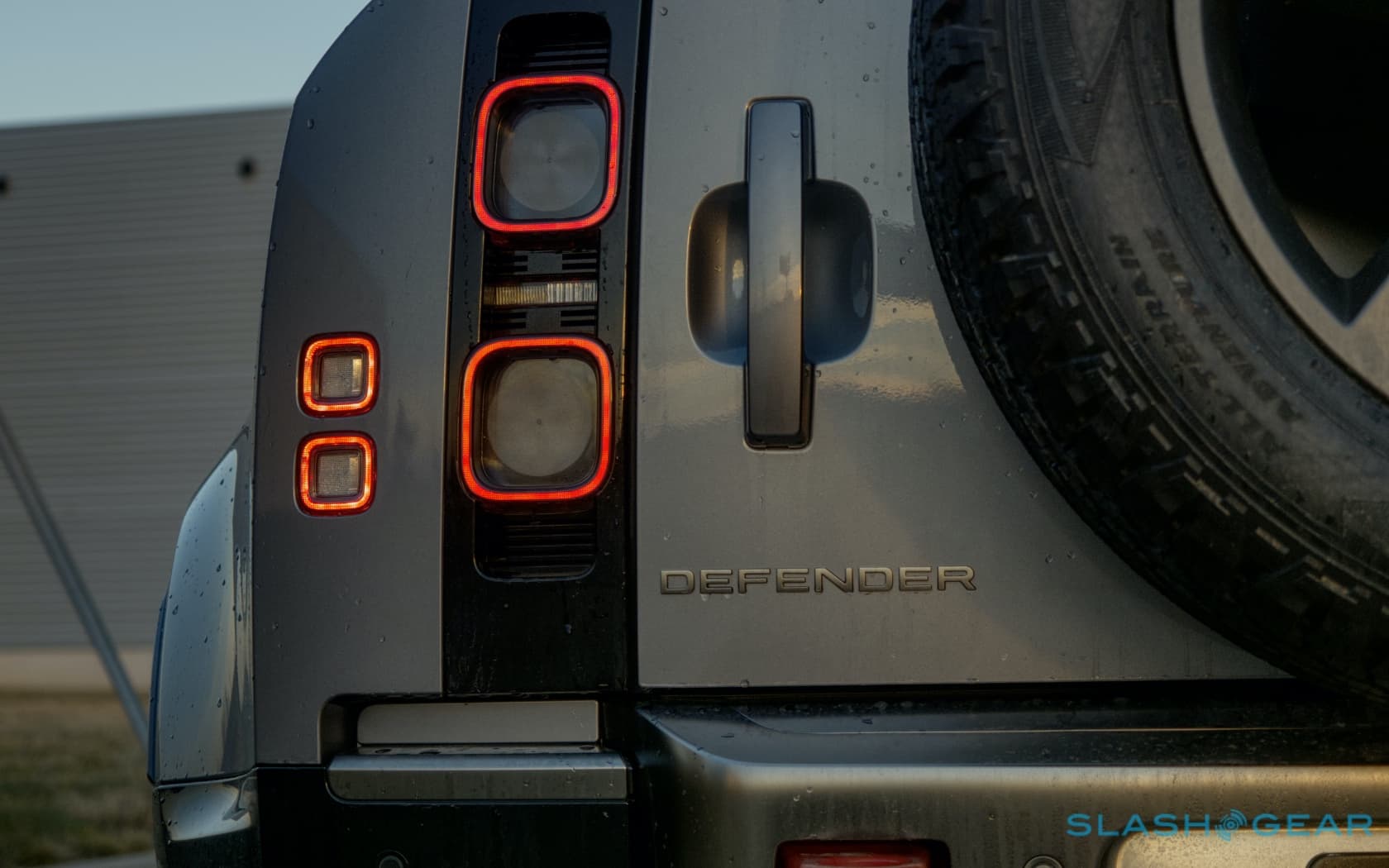 Exposed rivet heads and chunky switchgear both look and feel the part, while there’s a decent amount of headroom and legroom in both the first and second rows. The optional third row, however, is best left for the smallest of kids, or better still as cargo space. Drop the second row and you’re looking at a decent 78.8 cu-ft. If you need more, it’s rated to tow 8,200 pounds.

Hailing from the UK myself, I’ll confess there’s a little “home team advantage” that the new Defender 110 benefits from. That, of course, is countered by my natural British inclination toward pessimism: though nothing went wrong during my time with the new Land Rover, it’d be remiss of me not to mention the somewhat patchy reputation the automaker’s electronics suffer. A four-year, 50,000 mile warranty is standard. 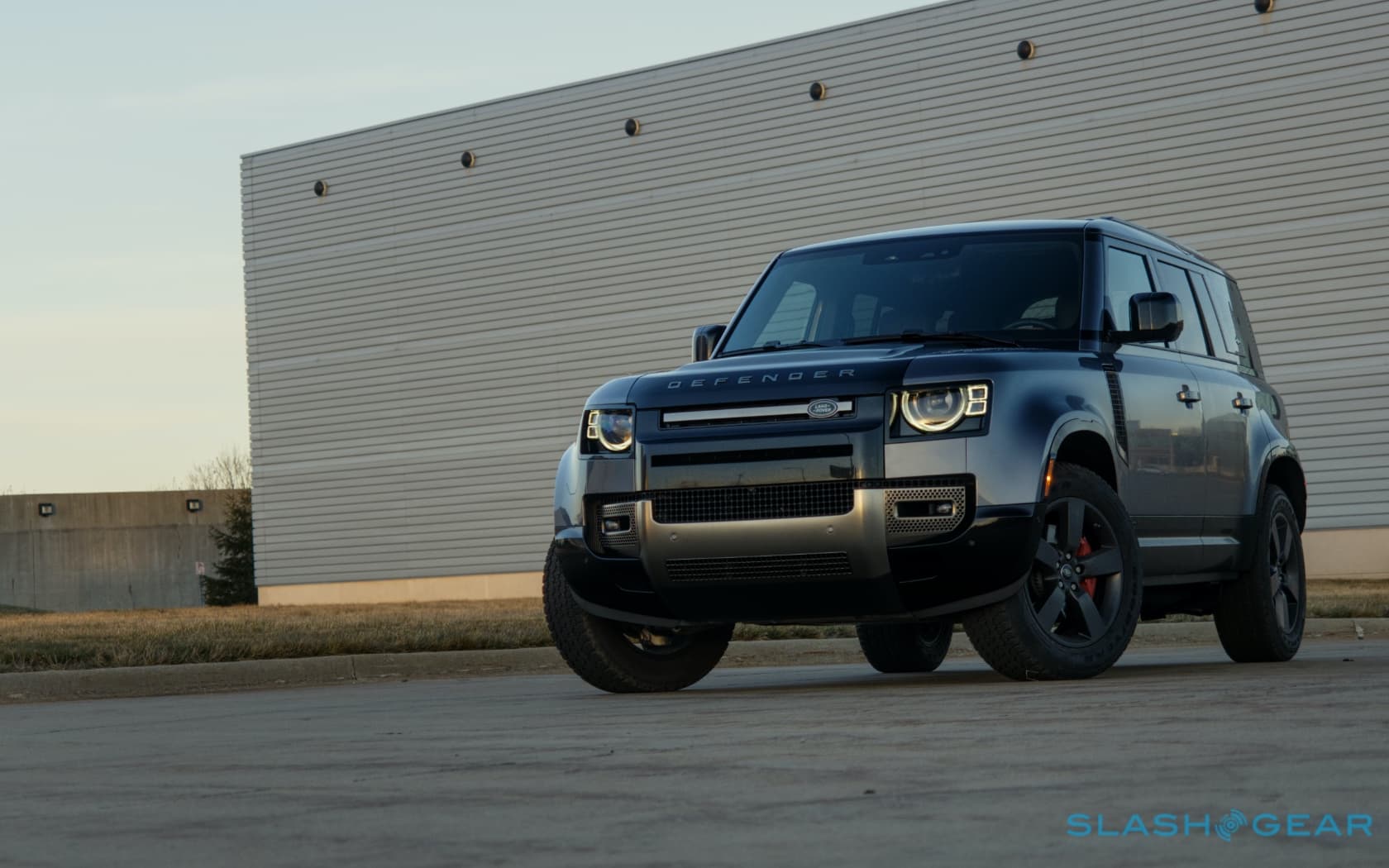 In total, though, it’s tough not to be swayed by the new Defender’s charms. It feels more special than other SUVs: built for the wild, yes, but hose off the mud and I reckon it could go toe to toe with a Range Rover when it comes to living fancy. The badge and standard equipment do carry a price premium, but I think the overall presence and the general cohesiveness of its on- and off-road abilities make that feel a reasonable price to pay. After 23 years of absence it’s not quite the Defender we expected: it’s better than that.