If there’s one thing we know about Siri, it’s that she sometimes has a hard time pronouncing names that can be a bit tricky, like if you have a non-English name that might be either hard to say or difficult to spell correctly. However, Siri in iOS 7 is getting a new feature where she’ll take the initiative to learn to properly pronounce tricky names.

It’s been discovered in the iOS 7 beta that Siri will ask for help pronouncing a name if she has trouble clearly understanding you the first time you say it. You can also say something like, “That’s not how you pronounce my name,” and Siri will take the time to learn your name by giving you a few options with different pronunciations and choosing the correct one.

If you rely on Siri a lot and get offended when someone either mispronounces your name or spells it wrong, then this will be a welcomed addition to you. Of course, we’d be surprised if someone was offended by a computer trying to pronounce a name, but we digress. Siri is coming with a lot of new additions in iOS 7, some of which weren’t even mentioned in Apple’s keynote at WWDC. 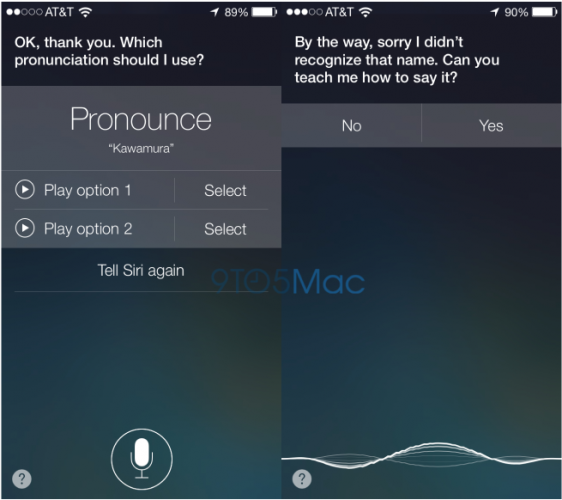 iOS 7 was announced earlier this month and comes packing with an all-new design that touts a flatter and more colorful look that represents the direction that Apple is going with their software, especially with Jony Ive at the helm of iOS now that former iOS designer Scott Forstall is out.

The new version of iOS comes with a slew of new features, including an Android-like toggle center for settings (dubbed Control Center), as well as bringing notifications to the lock screen, where users will be able to manage them without unlocking their device. Apple also increased iOS’s integration abilities in cars with some new car-centric features in iOS 7.