Apple has released iOS 13.5, bringing exposure notification for COVID-19 contact tracing as well as a quicker way to unlock your iPhone when you’re wearing a face mask. Released as a gold master for developers only two days ago, the software update won’t make your iPhone necessarily recognize you when you’re wearing the masks that are now mandatory in many locations, but it should get you to your apps faster overall.

Face ID is, unsurprisingly, intended to be used when the TrueDepth camera in the iPhone 11 Pro and other Apple smartphones can see your face. With a mask in place, however, that’s a problem. Until now, you’ve had to wait for that facial recognition authentication to time out, and then punch in your PIN or passcode.

iOS 13.5’s fix is to allow iPhone users to bring up the passcode field immediately, by swiping up from the bottom of the Lock screen. That way, if you’re wearing a mask, you can bypass the Face ID failure. It’ll also work for authenticating within apps and services, which would traditionally rely upon Face ID, such as in the App Store, Apple Books, Apple Pay, iTunes, and third-party apps with the biometric security feature enabled. 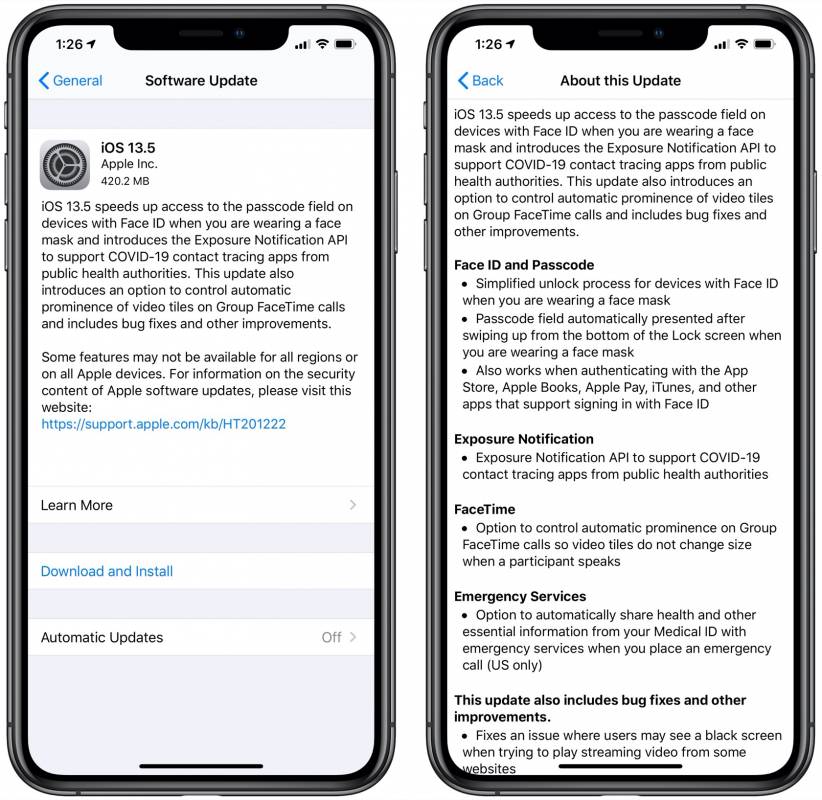 The other big new feature in iOS 13.5 is the launch of the exposure notification API. Apple and Google have collaborated on this, allowing contact tracing apps from public health authorities to use the Bluetooth on smartphones to build a log of who people have been in contact with.

If enabled, it maintains a log of Bluetooth contacts for the past 14 days. That’s basically a store of unique, randomized IDs from other peoples’ iPhone and Android handsets. Should a person be diagnosed with COVID-19 later on, they can upload their exposure notification log and that will allow others they were in proximity with to be notified that they should get tested.

It’s worth noting that this API in and of itself isn’t a contact tracing system. It’ll rely on third-party apps from public health authorities to actually work; Apple and Google have also said that they won’t be storing the contact data, and after the coronavirus pandemic has passed they’ll be turning the API off, too.

Two other iOS 13.5 features of note

While those two features may be the biggest news in iOS 13.5, there are two other changes worth checking out. In FaceTime, it’ll now be possible to override the automatic prominence system on group video calls. That’s what automatically enlarges the video tile of the person who is currently talking.

iOS 13.5 will allow you to turn that off, something which has been much requested during this time of increased reliance on video chat.

Finally, there’s a new emergency services feature. You can now turn on an option to automatically share your health and other essential information saved in the iOS Medical ID with emergency services, should you make an emergency call. For now, that’s only available in the US.