Today we’re having a peek at a set of Pokemon GO tips that’ll increase a user’s chances of finding Special Items on the regular. To make this happen, we first need to be clear: there’s only one way to really find a Special Item in Pokemon GO. That one way is to spin Pokestops, and to spin them often. Now, to go about making that happen as frequently as possible, we turn to the Journal.

Before we go any further, I need to make clear: you should NEVER EVER play Pokemon GO whilst driving a car, truck, or any other sort of vehicle. The following tip is suggested only for those users who are playing the game while sitting as a passenger. Playing Pokemon GO while driving can very easily result in car crashes, injuries, or death.

As a passenger in a vehicle, playing Pokemon GO isn’t all that productive. Going above a certain speed results in the game stopping all Pokemon from appearing nearby – and trying to battle at a Pokemon Gym is right out. Spinning a Pokestop, on the other hand, is a real possibility – if you do it right.

Spinning Pokestops while traveling at speeds faster than the average human can run will not work. The game will say “Try Again Later.” If, however, you’re a passenger in a car and keep the Pokemon Journal open until just before the vehicle reaches a Pokestop, there’ll be a moment – JUST a moment – where you can spin it. Getting this right takes a bit of effort and some trial and error.

2. Spin at the same time each day

This oddity is put directly in the circumstantial evidence pile – but it’s worth a shot. Several players on Reddit’s Silph Road have shown that they’re receiving Special Items when they hit a Pokestop at the same time of day, several days in a row. It’s possible – however unlikely – that this could have to do with the first time they ever attained a Special Item at a Pokestop. 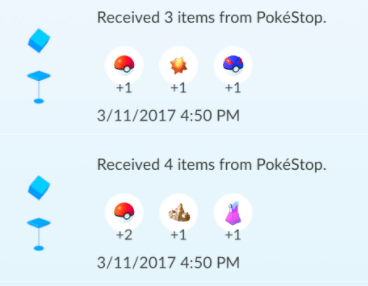 It could also have to do with a peak time of day which Pokemon users are playing in their region. The most likely scenario is that this is simply a fluke – or there’s some trickery going on. Either way, it might be worth heading back to the first time you ever found a Special Item, seeing the time, and trying for another at that same time.

This is another bit of hypothesis without proper research done to prove. What we’ve seen from a small set of players is a perceived increased likelihood of Special Items appearing at Pokestops for players with a direct need for said Special Items. For those players who need a Metal Coat for their Onyx, a Metal Coat has appeared.

The code to prove this theory would not appear on the player-side of the servers, so there’s very little we can do to prove or disprove in the end. What users can do – and what makes sense to do in the first place anyway – is to make sure the Pokemon they want to use a Special Item on is sufficiently prepared for that item first. If a Pokemon needs 50 candy and a Special Item to evolve, get that 50 candy.

Before we go out trying to find these Special Items, spending all our money on train rides to Pokestops all around the world, it’s important to know why. Why would anyone go out and make that sort of effort? Because filling a Pokedex is the most important quest any Pokemaster can go on. To be the best, you have to pass the test.

Above you’ll see the different uses for the Special Items that’ve been released in Pokemon GO thus far. There may be more – but not any time soon. I suggest you go through and evolve each of these Pokemon once to get them in to your Pokedex, then begin focusing on which is best for the item.

Of the two Sun Stone Pokemon, you’ll probably want to go for Bellossom – though she’s not all that different from Vileplume. Sunflora looks awesome, but isn’t especially powerful in the end. King’s Rock on a Slowpoke makes a Slowking which is basically the same as Slowbro, while a Politoed is less awesome than Poliwrath, with better potential moves.

Metal Coat – if you only plan on having one of them – should go to Scyther to make a Scizor. That’ll end up being more powerful – BUT – Onix turning into Steelix makes him bigger than the Gym screen can handle – which is funny.

As of the 22nd of March, 2017, the 7th consecutive day of spinning Pokestops will yield one random Special Item. This update comes from Niantic itself, and is 100% guaranteed. If a user does not get a Special Item on their 7th-day spin, there’s an issue – contact Niantic and let them know what’s up!

There’s very little you can do without cheating to get an abundance of Special Items. You can go ahead and do a physical hack of a Pokemon GO Plus. You could also go ahead and hack the game if you do so dare – but we don’t recommend it. Also have a peek at our @TeamPokemonGO Twitter portal for more tips, news bits, and early updates!