How does Bethesda keep screwing up so badly with Fallout 76?

Almost a year out from launch, the odyssey of Fallout 76 keeps getting stranger. Today, Bethesda announced that it’s implementing a new monthly subscription service for Fallout 76 called Fallout 1st. Subscriptions in a pay-to-play title generally aren’t a great idea to start with, but given all of the blowback Fallout 76 has received over the past year, this was a particularly harebrained move on the part of Bethesda.

That’s especially true when you consider that Bethesda is locking private servers, which I have to imagine is one of the playerbase’s most requested features, behind Fallout 1st subscriptions. A Fallout 1st subscription runs a whopping $12.99 per month, which is staggeringly high for a game and a publisher that has worn down consumer goodwill on numerous occasions. If you want to save a bit of money, you can buy a year-long subscription at $99.99.

At $12.99 per month, Fallout 1st is just slightly less expensive than Xbox Game Pass Ultimate, which gives you subscriptions to Game Pass on both Xbox One and PC and signs you up for Xbox Live Gold for $14.99 per month. PlayStation Now recently had its price cut to $9.99 per month permanently, and both it and Game Pass give you access to a wide variety of games (Microsoft says Game Pass has more than 100 and Sony claims more than 800 for PS Now) as long as you stay subscribed.

Bethesda, on the other hand, thinks that $12.99 is a reasonable price to charge for a subscription that covers a single game. A game, keep in mind, that wasn’t very well-received upon release and is lucky to have a playerbase at all these 11 months later after all of the nonsense Bethesda has pulled. 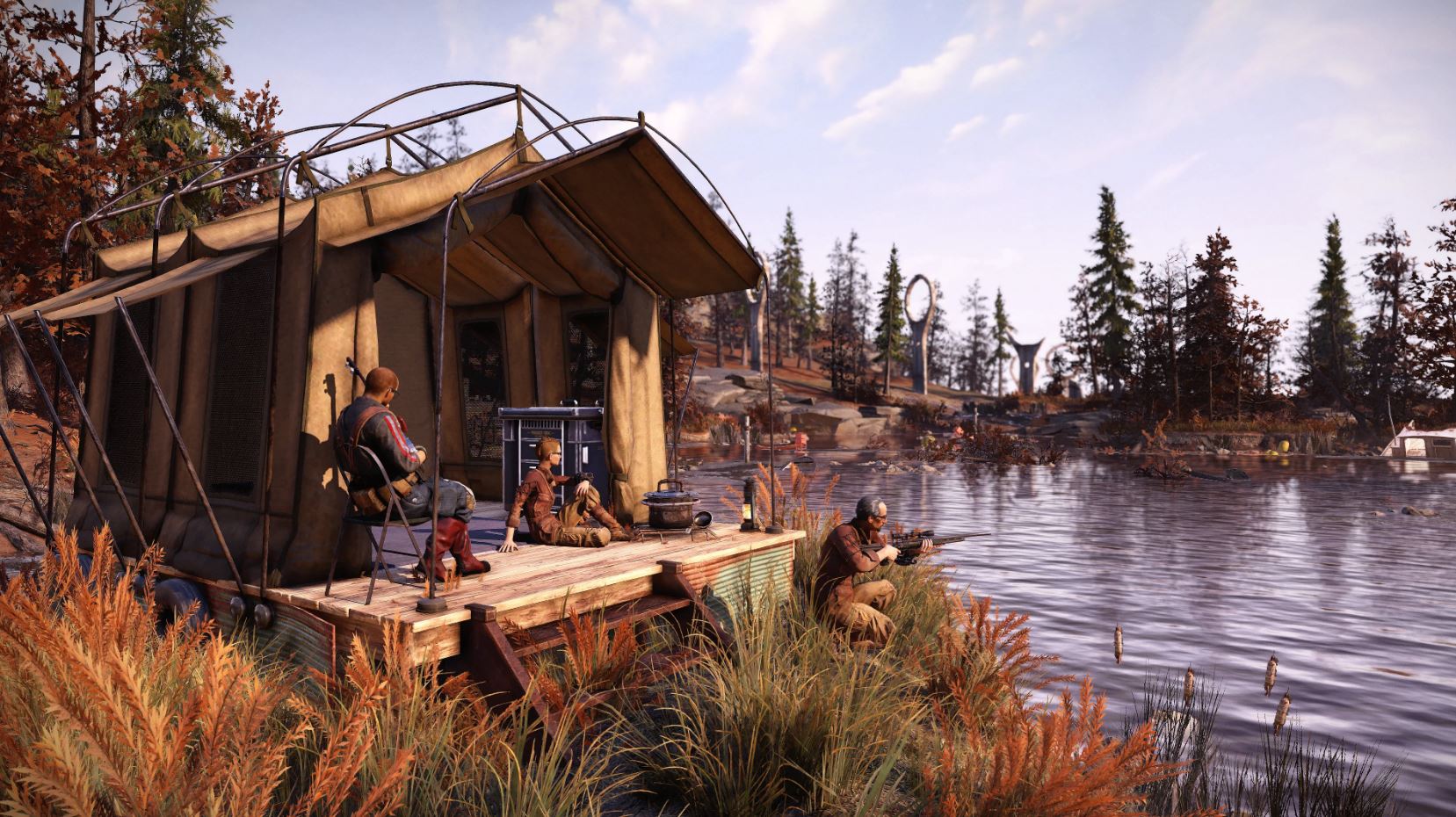 I’ll be upfront and say that I haven’t played Fallout 76 myself so I’m not really qualified to speak on its quality as a game either now or at launch, but I’ve seen enough from the sidelines to be convinced that many of us should be done giving Bethesda the benefit of the doubt. Let’s do a quick rundown of all of weird and, at times, insulting decisions Bethesda has made throughout Fallout 76‘s brief life so far.

In November 2018, as the game launched, those who ordered the Power Armor edition of Fallout 76 learned that the bundle didn’t include a canvas duffle bag as originally advertised, but rather a nylon bag that was of a noticeably lesser quality. At first, Bethesda’s support team was defiant in the face of complaints, with one customer support rep telling a customer, “We aren’t planning on doing anything about it.”

It doesn’t take a degree in marketing or public relations to know that flat out admitting you aren’t planning to do anything about accusations of false advertising is not how you handle situations like this. Eventually, Bethesda relented ever so slightly, offering players who were upset about the swapped bags 500 Atoms for use in Fallout 76‘s in-game store – the real-money equivalent of about $5. Keep in mind that the Fallout 76 Power Armor Edition cost $200, and the best Bethesda could come up with in this case was a $5 credit. 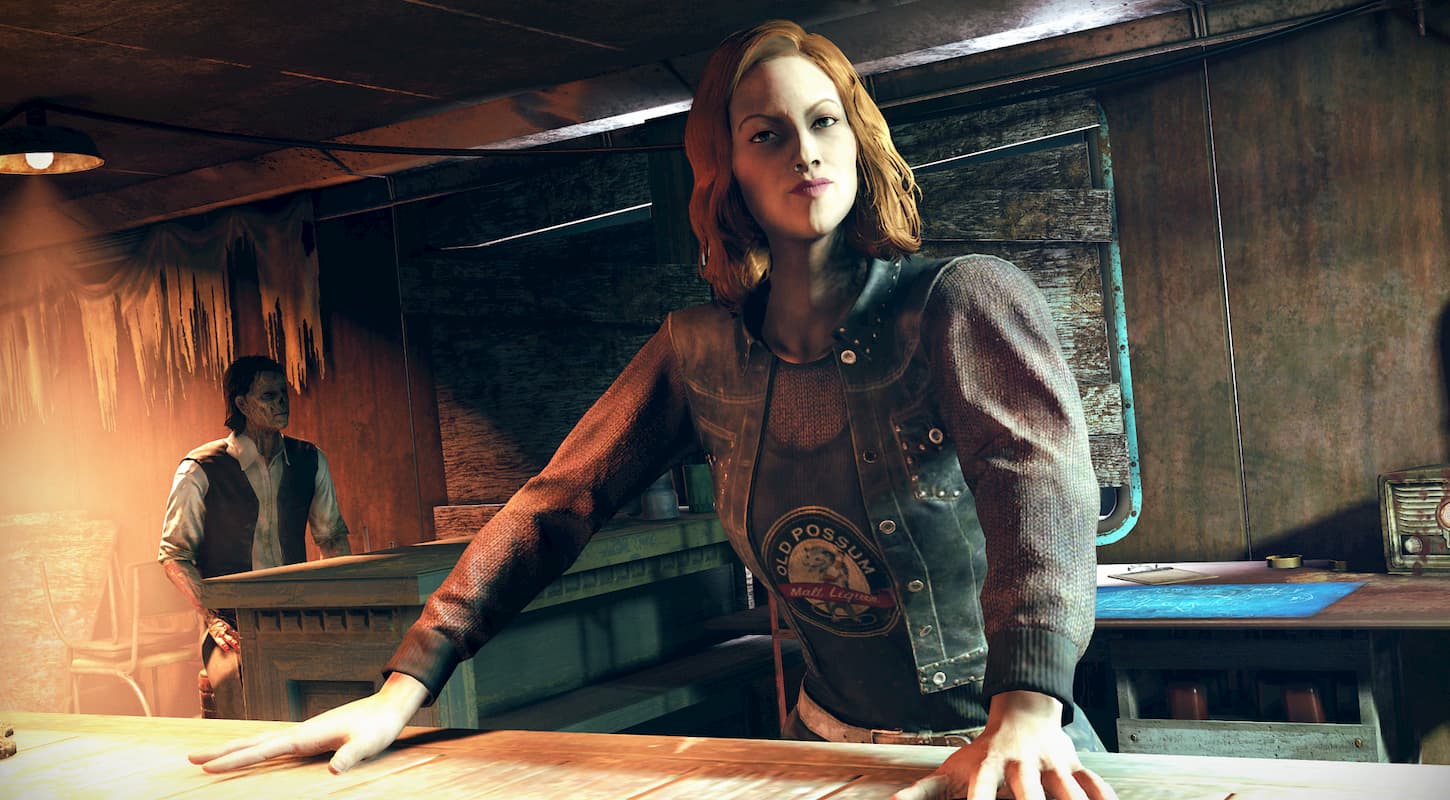 Bethesda finally gave in and sent Power Armor buyers the canvas bag they were originally promised, but those didn’t start arriving until June of this year, nearly seven months after Fallout 76 launched. If that were the only blunder Bethesda made with Fallout 76, maybe we could have looked beyond it, but like a pop star who somehow manages stay relevant over the course of many multiple decades, the hits just kept on coming.

In December 2018, Bethesda banned a trio of players for cheating, though those players said they were only using mods and weren’t using them to cheat. Putting the he-said-she-said aside, Bethesda told those players they would be unbanned if they each wrote essays on why cheating is detrimental to online games. Bethesda’s solution to deal with cheating was to assign essays as if banned players were being put in detention.

Then, in April, Bethesda starting selling Repair Kits through Fallout 76‘s Atom shop. As we’ve already established, Atoms can be purchased with real money, which meant that by putting Repair Kits in the Atom shop, Bethesda was straight up selling items that affected gameplay. The reaction to that was not very good, especially since Bethesda once said that it would only sell cosmetic items through the Atom shop. It only took the company six months to break that particular promise, so it’s no wonder fans were not pleased. 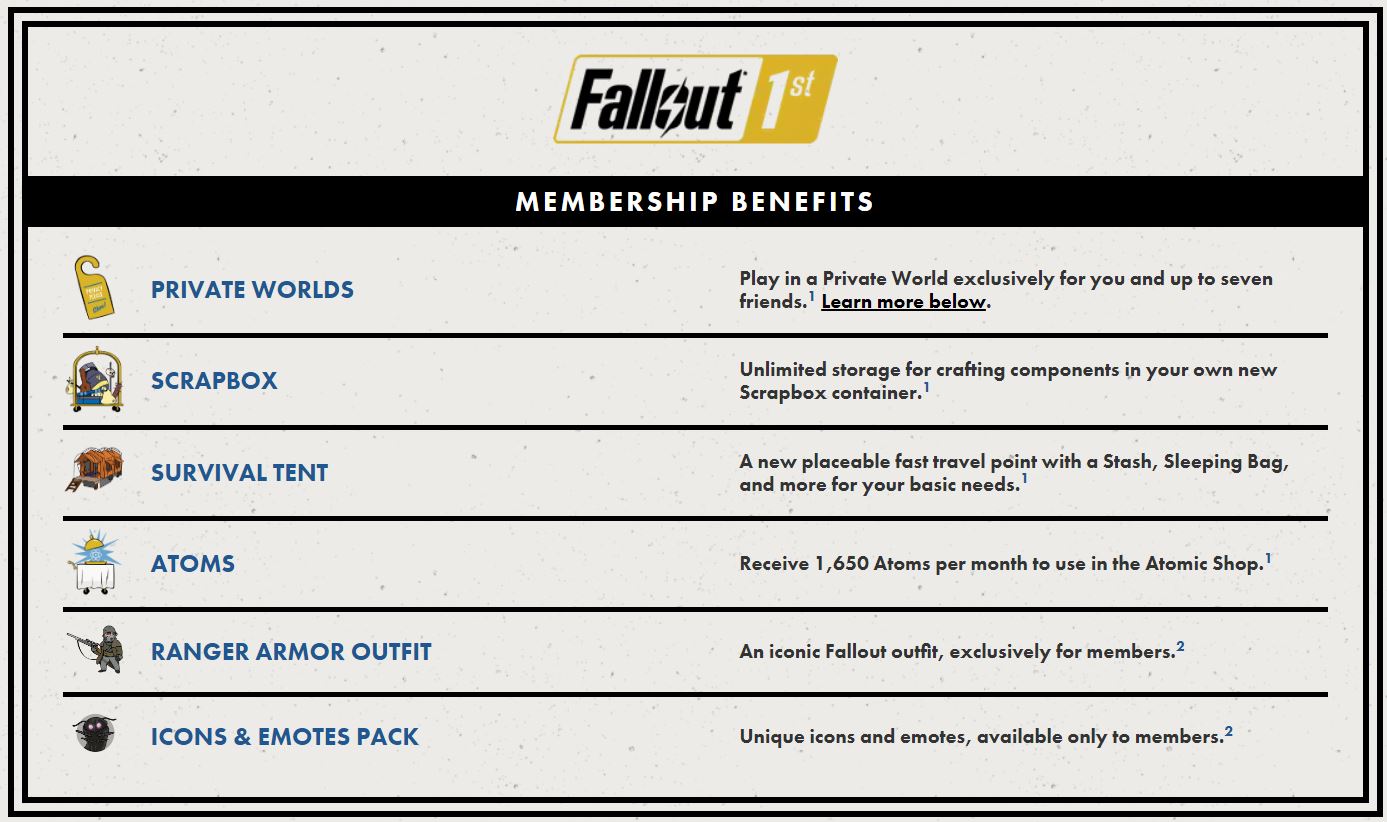 And now we’re here, with Bethesda thinking that charging a subscription for private servers is a good idea. It isn’t just private servers that a Fallout 1st subscription gets you, as you’ll also net a Scrapbox that can be used to store unlimited quantities of scrap, a Survival Tent that can be placed anywhere and acts as a fast travel point, and 1,650 Atoms each month. Essentially, a subscription makes the game easier for people who pony up the cash.

If there’s one thing that indicates just how bad Bethesda is at reading its audience even better than it charging for private servers does, it’s the fact that it’s also offering the Ranger Armor outfit from Fallout: New Vegas as a perk for subscribing to Fallout 1st. 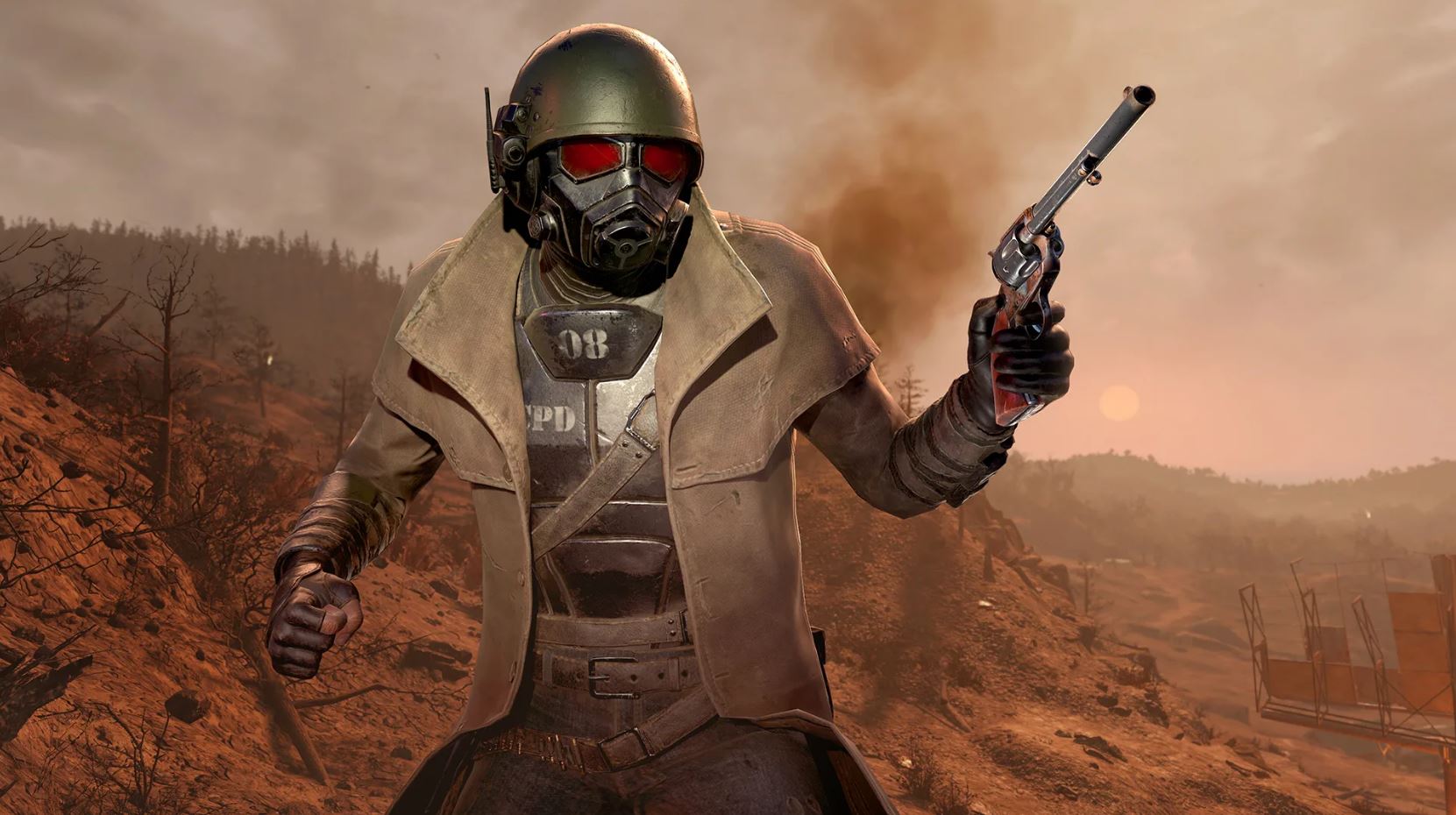 Fallout: New Vegas, for those who aren’t familiar with the franchise, is held up by many as the best of the modern Fallout games, and the kicker is that it wasn’t even made by Bethesda. It was made by Obsidian, with Bethesda acting as publisher. That Bethesda would offer the Ranger Armor from that game as a perk for paying a monthly subscription to play Fallout 76 – a game that will likely go down as the worst in the franchise – is just too rich, and I’m sure that irony won’t be lost on Fallout fans.

Overreaching with subscriptions and microtransactions and ways to get players to spend as much money as possible is, unfortunately, par for the course with live service games. Bethesda isn’t the only company to trot out nonsense like this in a game that’s hardly worth the time in the first place, but Bethesda does definitely deserve some extra attention for managing to make mistake after mistake with its handling of Fallout 76 over these past 11 months.

Needless to say, the Fallout 76 subreddit is not in a very happy place at the moment. There’s a lot of anger and a lot of players saying they’re done with the game for good after this. I can’t blame those players, and though I don’t play Fallout 76 myself, Bethesda’s penchant for making consistently awful decisions with this game is now making me want to ignore future releases too. 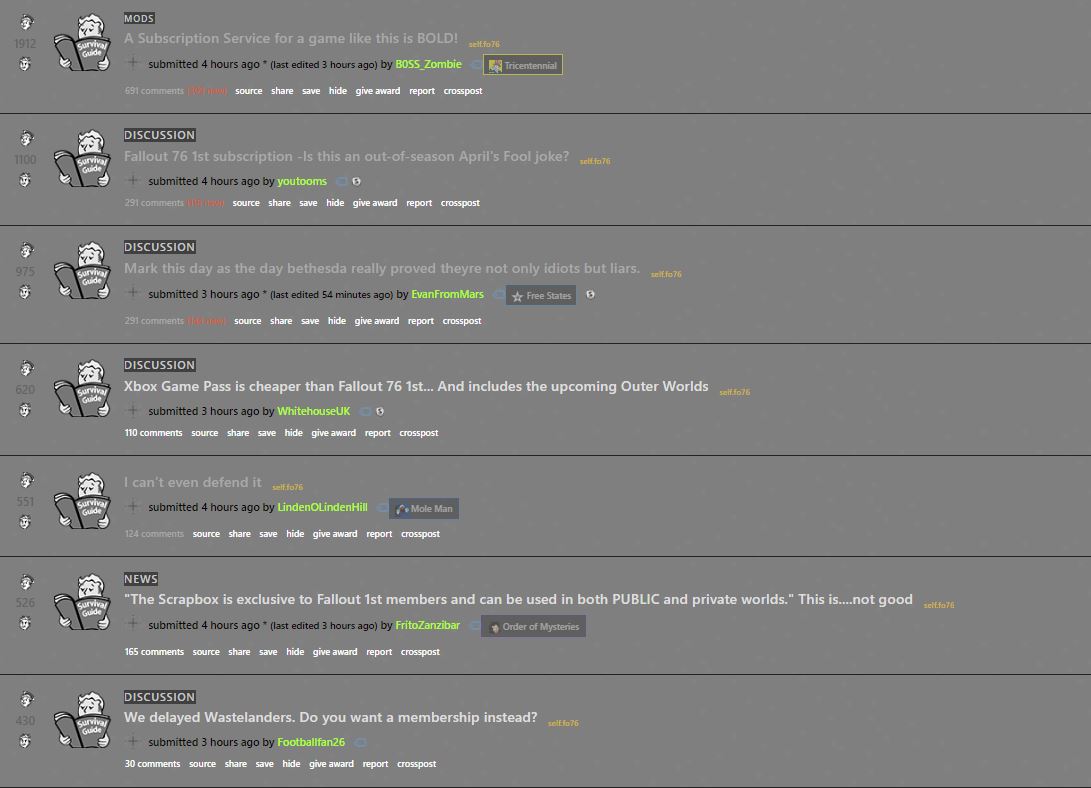 That’s saying a lot, because The Elder Scrolls is one of my favorite franchises of all time. I’ve sunk thousands of hours into Morrowind, Oblivion, and Skyrim combined, and I was really excited to see what Bethesda does with The Elder Scrolls VI.

Now, though? Who cares what’s in The Elder Scrolls VI? Why should I assume that Bethesda will treat one of the most beloved franchises in gaming history with elegance and dedication when it turned Fallout into a vehicle for microtransactions and subscriptions and clearly has the nerve to assume there’s no limit to which it can push its playerbase?

After everything that’s happened with Fallout 76, Bethesda just isn’t a company I want to support anymore, and that’s a shame because I really used to love its games, flaws and all. Hopefully one day Bethesda will be able to rebuild the trust between it and its fans, but after the catastrophe that is Fallout 76, that may not be possible – at least not from where I’m standing.