Here’s how Apple Pay was kept a secret

21 months of planning and negotiations, a “code name frenzy,” and clandestine signaling to executives with real pieces of fruit: turns out, getting Apple Pay off the ground without letting the cat out of the mobile payments bag wasn’t easy. Details of the cloak of secrecy used to keep hundreds of people across eight different financial institutions from spilling the beans on Apple’s big cashless announcement this week have emerged, and it’s just as obsessive as you might have expected.

The credit card companies came first, American Express, MasterCard, and Visa, with discussions starting back in January 2013 according to the NYTimes. By the summer, Apple was opening talks with the five major banks.

Secrecy was still tight, of course. Apple refused to tell each bank which of its counterparts were involved, and each had code names by which the other was referred to; one bank even decided to refer to Apple by a rival electronics firm’s name, while at JPMorgan Chase only a third of the people actually working on the project knew it had any connection with the iPhone maker.

Even as Tim Cook revealed Apple Pay’s existence, that was apparently the first time each of the partners actually heard the final name for the service.

Perhaps the most entertaining aspect is the efforts Apple and partners went to try to time the announcements right. JPMorgan Chase’s CFO, Marianne Lake, was on-stage at a financial conference running in parallel with Apple’s own presentation on Tuesday morning, for instance, and was given the green-light to discuss Apple Pay when one of her assistants surreptitiously placed a green apple on a table on the stage.

Apple Pay uses a new NFC radio built into the iPhone 6 and iPhone 6 Plus to communicate with wireless payment terminals at retailers like Macy’s and Subway, putting virtual credit and debit cards into Passbook, and securing the whole system with Touch ID. 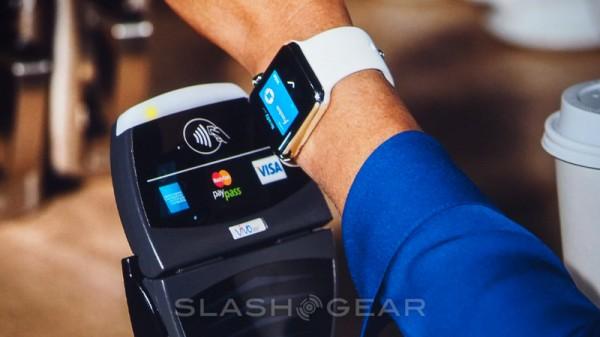 For the Apple Watch, meanwhile, the authentication system will only operate if the smartwatch is being worn.

For the banks it’s a calculated risk based on Apple’s heft in the mobile market. Apple will take a cut of each payment, it’s said, while banks themselves are offering a lower rate for transactions than through other methods.