It looks like CBS is the latest victim in a series of Social Network account hacks that seem to be prevalent this year. Today, CBS stated that several of its Twitter accounts, including 60 Minutes, 48 Hours, CBSDenver, and its official Twitter account were all compromised earlier today. The hackers used the accounts and tweeted things like, “General Dempsey calls for #Obama’s arrest under new anti-terror laws #48hours”.

The hackers also provided links in the tweets that led to malware infected sites. A couple of the tweets took jabs at President Obama, while others suggested that the United States was in cahoots with Al-Qaeda. CBS quickly regained access to the accounts thanks to help of Twitter. It was quick to delete the tweets, and apologized to its followers for the immature activity that took place. 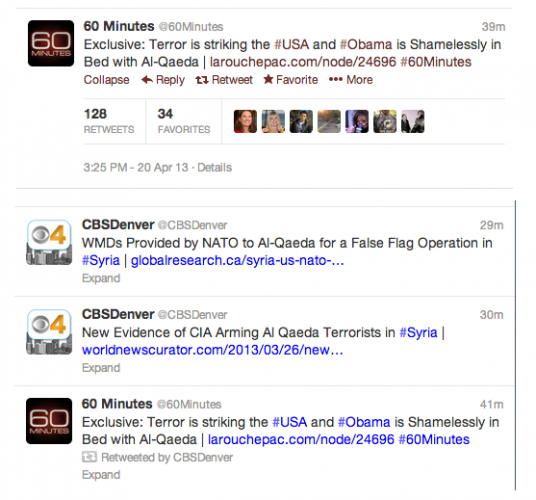 CBS is just one of many victims this year that have been targeted by hackers. Earlier in March, hackers got a hold of Colin Powell’s Facebook page, and posted several, vulgar comments geared towards himself and the Bush family. The hacker was the same hacker who got a hold of personal emails from the entirety of the Bush family. Later on in the month, 3 of BBC’s Twitter accounts were hacked by a group who called themselves the Syrian Electronic Army.

Then there were also those funny account hacks, like back in February when Burger King’s account was taken over and transformed into a McDonalds’s account, with its profile bio saying, “Burger King USA Official Twitter account. Just got sold to McDonalds because the whopper flopped =[.” Considering all of the recent events of Twitter accounts being hacked, maybe it’ll be wise for Twitter to implement a two-factor authentication system.