Over the past several weeks there’ve been an increased number of scams and phishing schemes showing up related to Grand Theft Auto 5. So very many of them have appeared, in fact, that RockStar Games are getting involved with massive warnings. What better way to continue fueling your own hype machine than by piggybacking on the mini-hype machines others are attempting to use to piggyback on you?

According to RockStar Games, there is no Pre-Release BETA of any kind for Grand Theft Auto V. There is no Beta Test, there is no official solicitation for said beta. The only release is the one, true release, and nothing will be released before it.

The only people that may POSSIBLY end up playing the game early – outside RockStar Games developers – are reviewers and press affiliates. Or if you happen to have an Xbox 360 or PlayStation 3, of course. The next real releases will be as follows: 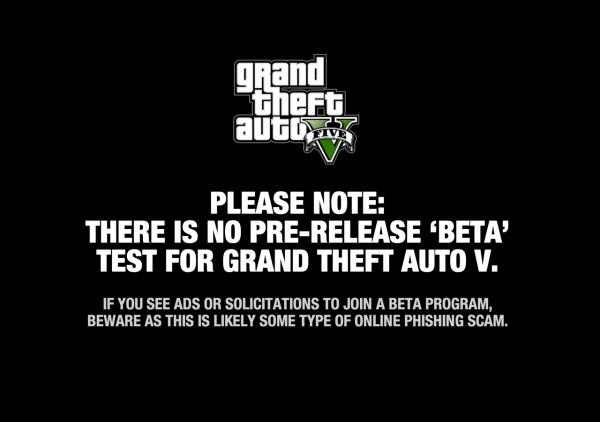 Any other releases have already been made or will be made after those dates for those platforms. As RockStar reminds, even if you see a banner ad that seems completely legit for a GTA:V Beta, it’s not. It’s a scam or a hoax. The real game comes out all at once.