Google’s Project Ara modular smartphone just can’t catch a break, with plans to use fancy electropermanent magnets scrapped after they struggled in testing. The Ara team had planned to use an innovative new module attachment system with, it was promised, the flexibility of a magnet but the power-efficiency of more physical connectors. Turns out, though, that technology wasn’t quite ready for primetime.

Back in January, Google’s ATAP team outlined how the electropermanent magnets worked.

Unlike regular magnets, which are magnetized all the time, or traditional electromagnets, which can be turned on and off but require a permanent power supply in order to keep them clinging, Google’s system used a short pulse of power to switch between the two states. 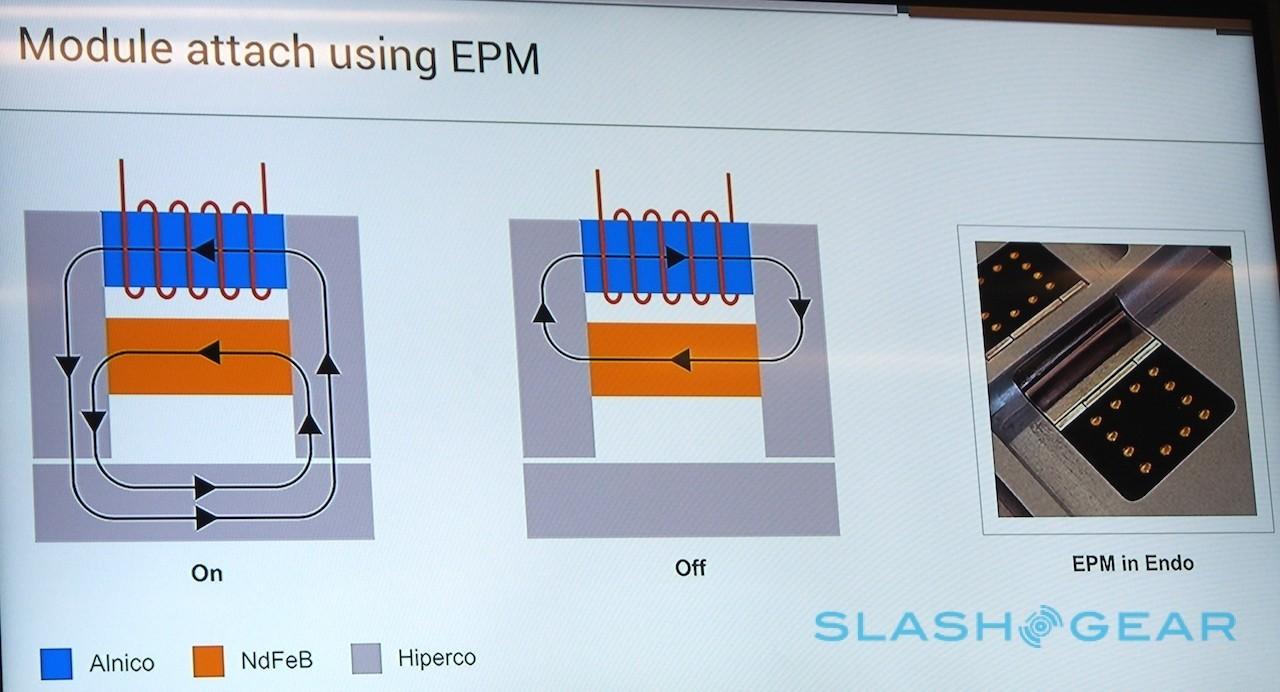 It was a clever approach, in theory allowing the modules – like Ara’s removable cameras, speakers, batteries, and more – to be easily removed yet stay in place when the phone was in a pocket or bag. Unfortunately the reality wasn’t so successful.

Today, the Project Ara team tweeted that the electropermanent magnets had failed in drop-testing, presumably proving unable to hold the various pieces of the smartphone together if it fell on the floor.

It’s not clear at this stage what the ATAP engineers will switch to in preference. The “Spiral 2” prototype we played with earlier in the year used traditional magnets, which proved so tenacious as to make sliding each module out a two-handed affair.

Update: The ATAP team says it is currently testing a “signature experience” as a replacement.

We are testing a signature experience to attach/detach modules. #ProjectAra #HopeYouLikeIt

Meanwhile it seems the module design itself is changing, too, with some of the core functionality condensed down so as to leave more space for interchangeable features.

We want to give users more space for more modules. So we grouped the core functionality to free up space. #ProjectAra #ThinkingOfYou

It’s not been smooth sailing for Ara. Google’s ATAP team had hoped to begin a trial deployment in Puerto Rico this year, but announced earlier this week that those plans had been scrapped and public testing wouldn’t take place until 2016 at the earliest.

Update (8/20): Turns out, those wags manning the Project Ara account weren’t being entirely forthright about the module design changes. The team now says the drop test comment “was a joke” and that the smartphone didn’t, in fact, fail, but that it has “been configuring a new solution” all the same.

BTW #FailedTheDropTest was a joke. Didn't fail. We have been configuring a new solution. It's better too. #WorkingOnOurHumor

Meanwhile, there’s also the promise of a new camera module- perhaps replacing the relatively low-resolution Panasonic sensor we’d already seen, the 5-megapixels of which were looking on the mediocre side – as well as improvements in battery life.