Project Ara delayed to 2016, looking for US launch site

It seems that the dream has officially been delayed. The Project Ara team has officially confirmed what was already foreshadowed in yesterday’s tweets. The modular smartphone won’t be coming this year. Instead, it will have a 2016 launch which still has no new timeline. And instead of doing it outside of the country, the first Project Ara smartphone might be launched somewhere in mainland US instead. Naturally, despite its best efforts to assuage fears, the delays would inevitably worry not just fans but also existing and potential hardware partners.

For a while, it seemed that Project Ara had become dormant, with not a single peep since the end of May. Then suddenly last week, the project’s Twitter account sprung back to life. Sadly, it seemed it was only in preparation for the bombshell it would drop the next day. Project Ara won’t be launching in Puerto Rico as initially planned and it was “re-calculating” its route. And apparently its schedule.

Instead of Puerto Rico, the team is now looking for another launch site somewhere in the US. The choice of Puerto Rico was, at that time, auspicious. Both technical and legal pieces were firmly in place and it would have boosted the image of the smartphone as something not just for the tech savvy market. Launching in mainland US, however, might prove to be more economical and practical.

ADDENDUM: The above parts of this article has been edited slightly to reflect the possibility of the launch happening within mainland US territory, versus unincorporated territories such as Puerto Rico. 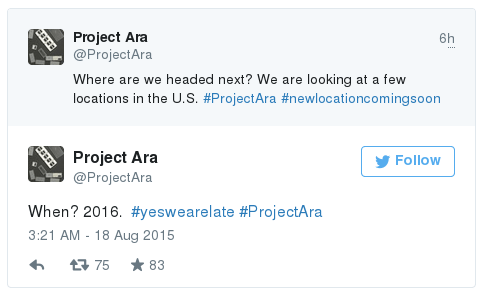 As to the reason for the delay, the team isn’t saying much apart from the fact that they underestimated the number of iterations or possible combinations of modules. In other words, it might more be a logistics issue than a technical one. Project Ara has come a long way, to the point of an actually booting and basically working smartphone. But it will, of course, need to be more than that to fulfill its promise. Sadly, it seems that the modules that would make Ara a success are now also holding it back.

It is naturally disappointing, if not worrying, to hear that we won’t get to see Project Ara in the flesh this year. But the quest has been an almost impossible one anyway it would truly be a feat to see it come to retail at all. Whether or not it becomes a commercially viable product, however, is something still up in the air.