Google made $14.9bn in revenue in Q3 2013 despite Motorola Mobility sales continuing to shrink, with CEO Larry Page making one final earnings call to praise the Chromecast and namecheck smartwatches as one of the next big things in digital. Overall, revenues were up 12-percent versus the same quarter last year, with cash or cash-equivalents on hand amounting to $56.52bn. Speaking on the investor webcast, Page highlighted the speed at which the multi-screen world had developed, pointing to wearables like Glass and smartwatches as examples, and saying he no longer need feel guilty about spending time visiting the Android team.

“For years, everyone talked about the multi-screen world. Now, it’s arrived, but at a scale few imagined” Page pointed out. “People increasingly have more than one device and screens are proliferating, in the home, as well as wearable screens like watches and Google Glass.”

Google has been widely suggested to be developing a smartwatch of its own, potentially alongside Android KitKat. Rumors from inside the company have suggested that Google Now, the company’s predictive and contextually-aware engine, would be an integral part of the wearable; it’s also expected to build upon the work of WIMM Labs, which Google acquired last year.

Page also touched upon the importance of research & development, and of not being too distracted by fears that the payoff might not be immediate. “When Android was still a skunkworks project, I used to feel kind of guilty visiting the team” he reminisced. “We were a search company, and building a new operating system wasn’t an obvious move to most people. Turns out that was a lot of misplaced guilt. Over one billion Android devices have been activated worldwide, and over 1.5m are lit up every day.” 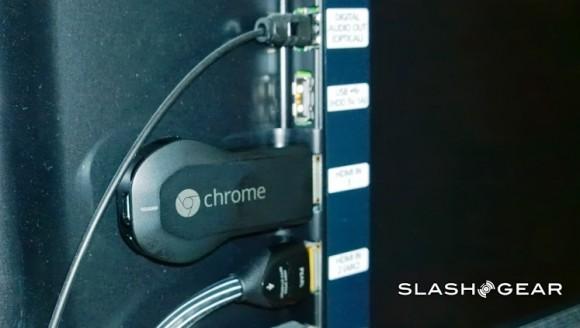 The Chromecast is a similar success story, he suggested, and epitomizes the importance of devices and services as part of an ecosystem rather than standalone products. “As screens multiply, the ability to navigate across them seamlessly becomes more and more important” Page highlighted. “That’s why I love Chromecast, which we launched in July and it immediately became a best-seller.”

However, despite that enthusiasm, Motorola still struggles to find its feet. Revenues for the Google-owned phone company were $1.18bn in the quarter, contributing 8-percent to Google’s business overall, versus $1.78bn or 13-percent of consolidated revenues in the same period in 2012. That’s despite the launch of the Moto X.