Google Keep, the note-taking service launched to rival Evernote back in March, has been updated with notifications and Google Now integration, aiming to pull out relevant notes rather than wait for users to dig through them. The reminders system works both on time, as per a regular alarm, but also on location, meaning that the app can now flag up a notification with, say, your shopping list when you go into a grocery store.

A new “remind me” button has been added to the Android app and to the web/Chrome apps, with the choice between time and location. The former simply requires a date and time, while the latter automatically suggests locations you might be looking for as you type.

Meanwhile, there’s a new notifications drawer for Google Keep, which can now be switched between different accounts – such as personal notes and those connected with work or individual projects. The drawer also shows all upcoming notes in a straightforward list, while notifications themselves can be snoozed. 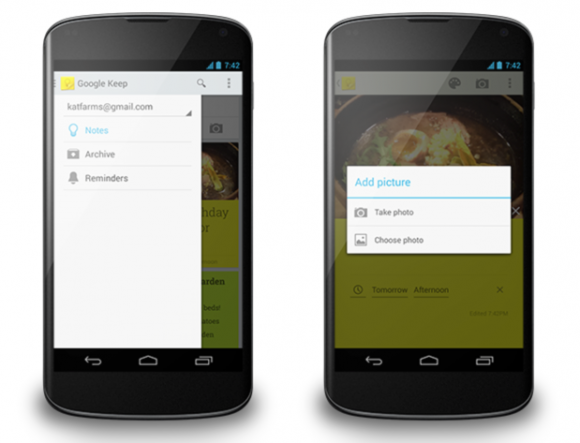 Google has also improved how photos are handled by Google Keep, which stores notes and other content in users’ Google Drive accounts. Now, in addition to taking a new photo and uploading it, it’s possible to upload an existing image already on the phone.

Integrating Keep into Google Now, and adding location-based reminders, is another stage of Google’s work to hyper-localize its services. The company has been testing Now cards with highly localized information for some time, and recently updated its Glass headset with local emergency warnings as part of the XE7 update.