Google Glass 2 details leak as Glass offered to all

Just as the first wave of Google Glass units are put on sale in a public way, rumors of the second edition begin to appear. A tip from Crystal Optech’s own Kong Wenjun suggests that they’ve supplied – through several middle-men – samples of their technology to Google’s Research and Development for Glass. While this would suggest that Google Glass 2 is on the way, it should not be a surprise that Google is continuing research into better and more advanced ways to present their product.

When one device is released, a company should – and generally always is – researching and building the next. This is the same with a tech company like Google as it is with a toy company like LEGO or a smartphone group like Samsung. Development never stops.

We’ve had some extensive experience with Lumus over the years, including having a peek at their headgear every year at CES going back to the year 2012.

Above you’re seeing the Lumus DK-32 wearable display. This display was connected to a rather sizable box back then, showing off its abilities in two separate displays in a full-sized pair of glasses. These glasses used technology similar to Google Glass, but did not project onto a tiny piece of glass like Google’s solution. 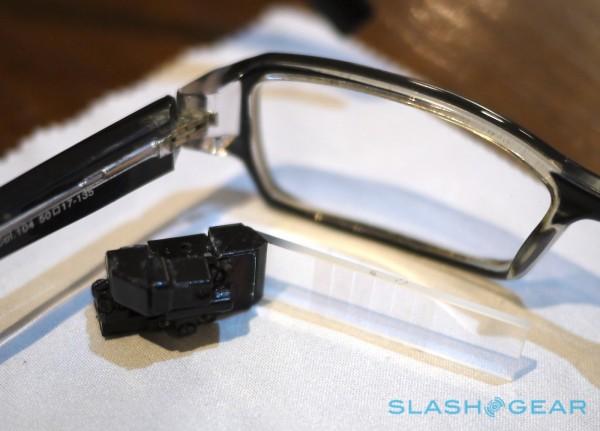 We also had a peek at at the Lumus OE-31 wearable display that same year. This solution was similar to the DK-32, but delivered a much more miniature glass display. This display was extremely similar to what Google Glass ended up becoming.

Fast-forward to January of 2014 and we had a peek at the Lumus DK40, a headset that’s far more sleek than either previous solution. This DK-40 solution is much closer to a final product, running Android and projecting the display over the standard eyeglass.

Rumor has it that Google had spoken with Lumus at one point or another, though whatever deal they’d supposedly worked out was ended due to low yields from the smaller company. Though Google Glass isn’t yet a massive-production project, Google certainly needs to be prepared for the eventuality that they could produce the product en masse.

What does this mean for the new Google Glass buyers this first “public sale” season? It means buy with caution – the same caution you buy with whenever you purchase a device in our always-evolving smart device manufacturing environment.

If you thought Google was going to stop creating new models of Google Glass with the first generation, you were fooling yourself. Glass has, after all, come a long way already.

Above you’re seeing the original Google Glass prototype. This was shown to us at Google I/O 2013 with Industrial Design Lead Isabelle Olsson at a Google Glass Fireside Chat. Have a peek at the full chat series for a whole lot more Glass and Glass-based insight.