Technology made by the Lumus group has been applied to a pair of glasses shown at CES 2012, and today we’re getting our first chance to take a peek at a demo unit. These glasses are not a consumer product, instead being shown off here as a demonstration piece of equipment so that the Lumus technology can be picked up by a manufacturer and made into a real deal for-sale piece of equipment. The video below is also your rare chance to see your humble narrator without glasses on in the interim, only to move on into the 3D world with Lumus.

With these glasses you’ll be able to see content including internet with a web browser, movies, TV and video games. What we see here is moving images that can be seen by me with the glasses on and not by anyone else around me as I’m viewing. The actual technology is in the boxes on the outsides of the lenses, one for each temple: OE-32 Optical Engine modules to project 720p resolution in 3D received through HDMI.

What they’re saying here is that what we’re seeing is the equivalent of an 87-inch screen from a distance of 10 feet, essentially no matter what you’re looking at. In reality it’s an image that’s certainly displayed in front of you in a way that’s not headache-inducing, believe it or not. Your demo man here is someone who isn’t a friend of 3D, not in tablets, not on televisions, and certainly not right in the face, but this wasn’t that bad. In fact, it was downright enjoyable to look at, especially since they had corrective lenses in a box to correct for this fellow’s terrible, terrible eyes. 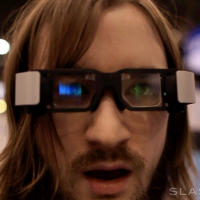 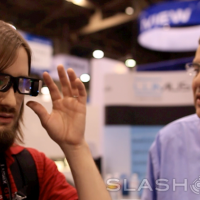 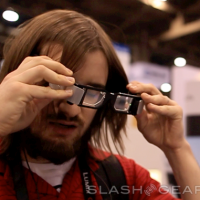 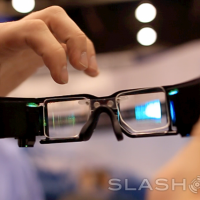 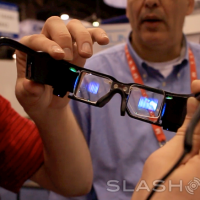 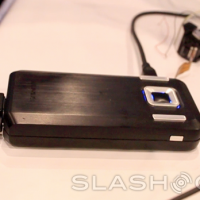 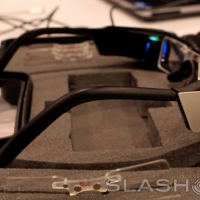 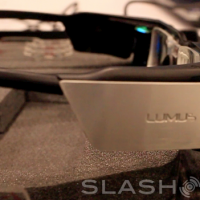 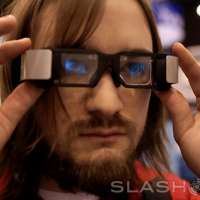