A friendly man collected the 2021 Lexus LC 500 Convertible from me two months ago, but I can’t stop thinking about it. Normally, I’m not much of a cabrio fan, but the LC suits the open top experience pretty much perfectly. Certainly enough for it to get lodged into my mind.

We’ve already reviewed the LC 500 Convertible: I knew it was going to be good. What I hadn’t expected was the ways in which it would inveigle itself into my brain. Long after handing back the keys and waving off the glittering Infrared Red two-door, I’ve found myself thinking about how unusual it actually is, why it stands out in a sea of luxury performance options, and where it might go next. 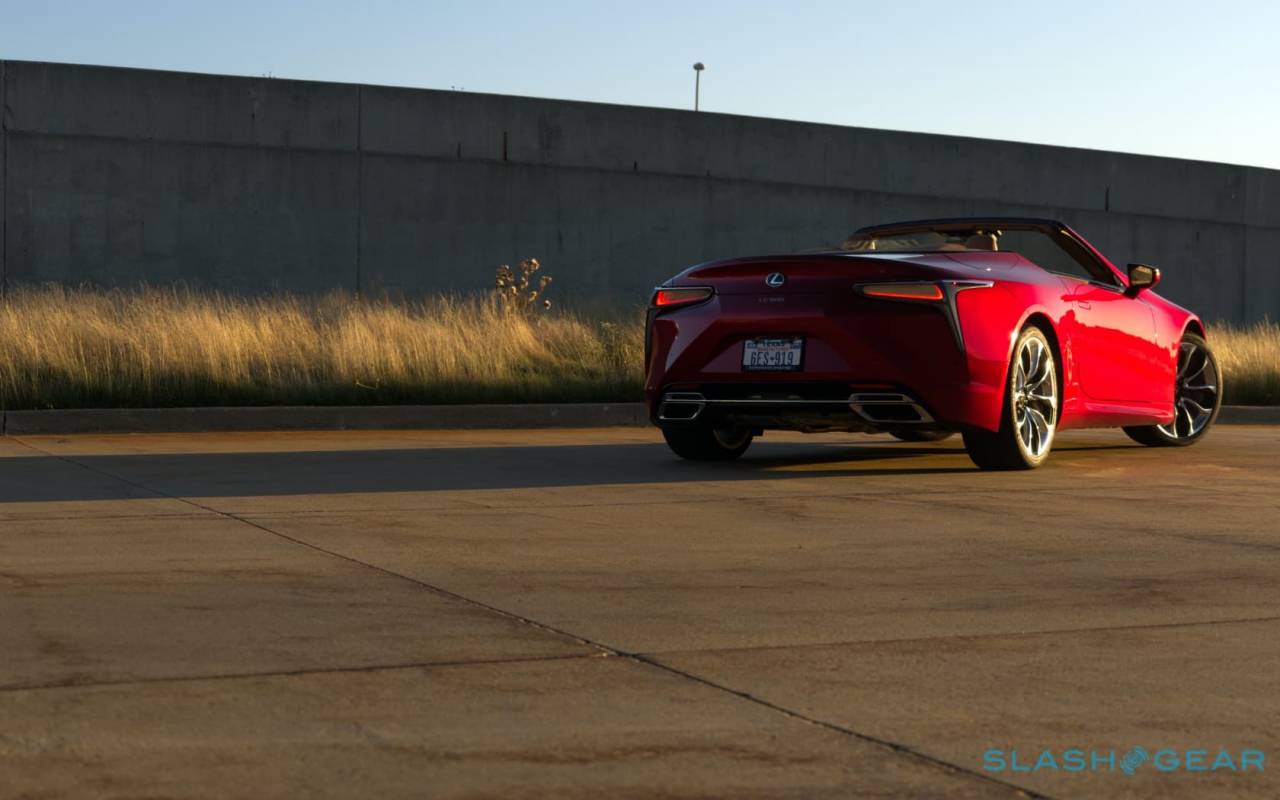 I doubted Lexus could pull off a droptop LC, and I was wrong

The original LC 500 Coupe was a legitimate auto-world shock when Lexus revealed it back in 2016, and it remains astonishing today. Mesmerizingly – indeed almost unbelievably – close to the original LF-LC Concept unveiled four years prior, it demonstrated amply that Lexus was capable not only of great car design but engineering greatness too. Being able to take the concept coupe and bring something that looked so close to it to production was – and is – a huge achievement. 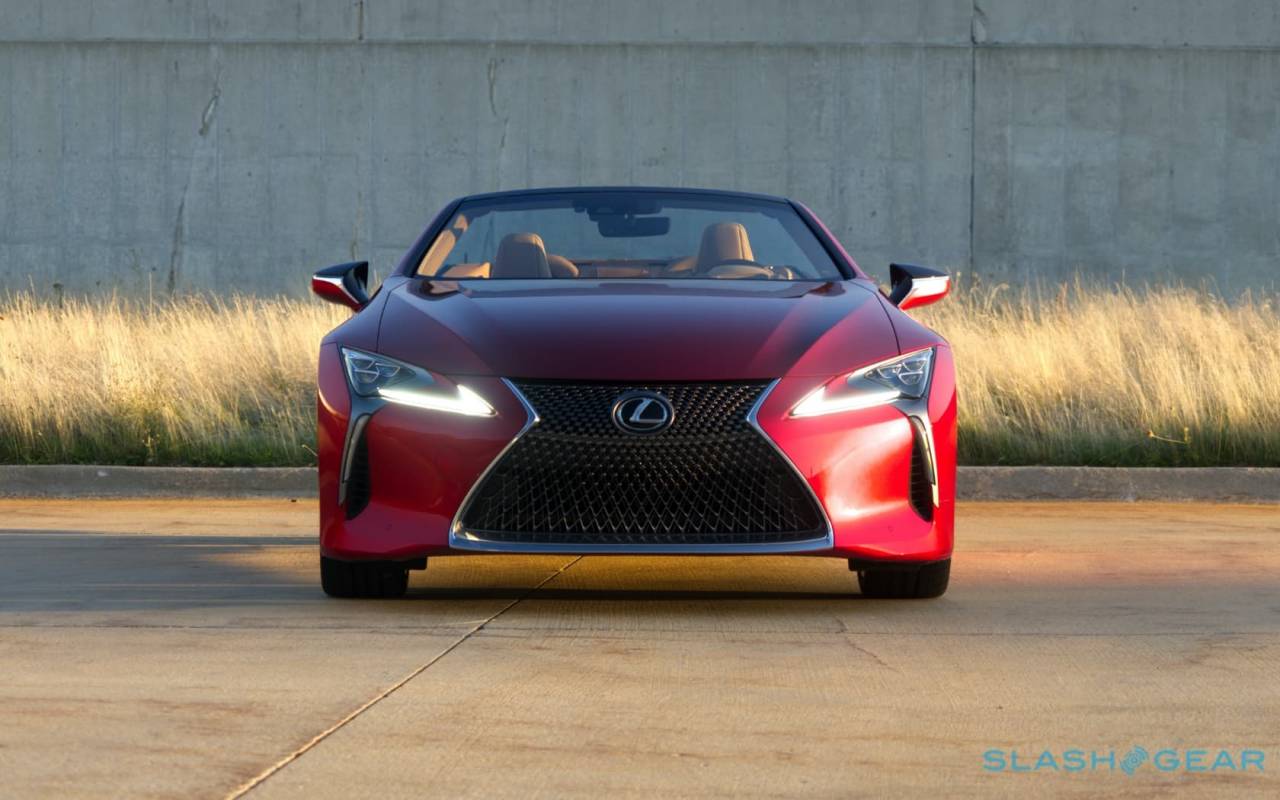 Even today, roughly four years after it first went on sale, the LC 500 Coupe turns heads out in public. It looks, well, like a concept car just rolled out of an auto show. It also, or so I assumed, didn’t really lend itself to a convertible version. 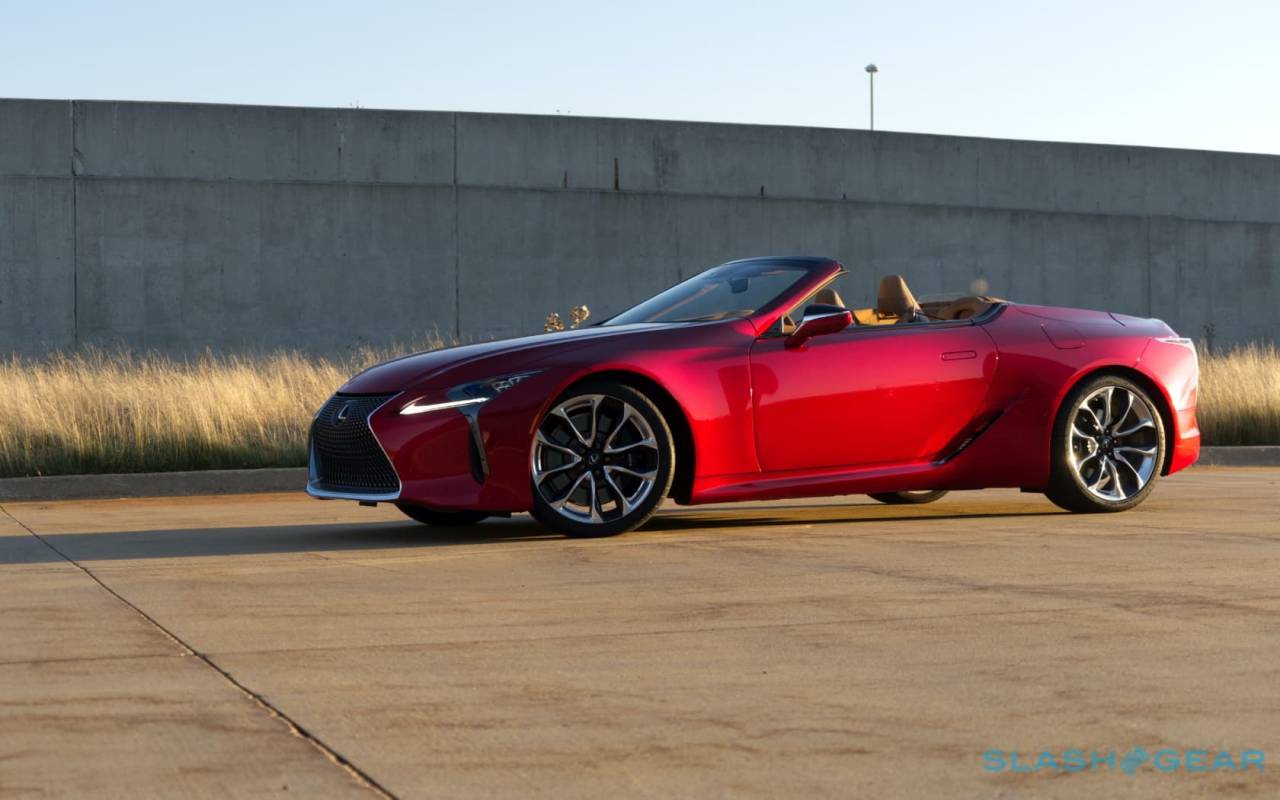 The rear, from the B-pillars back, is a complex cluster of intermingling angles. Dominated by the sloping rear window, and the upward kink to the shoulder-line, it gives the LC 500 Coupe its evocative teardrop profile. However it also makes chopping off the top and replacing it with a convertible roof much harder.

Or, so I believed. When the LC 500 Convertible appeared in late 2019 for the first time, I had to eat my proverbial hat: Lexus has proved me wrong. The rear view isn’t quite the same as for the coupe, no, but it’s no less handsome, only different. Were I nitpicking, I might suggest that the rear deck can look a little stretched from some angles, but that’s a minor quibble about another jaw-dropping car.

The V8 is beautiful but it makes me sad, too

Naturally-aspirated V8 cars are increasingly rare, as turbocharging and, to a lesser extent, supercharging takes hold. You can see why: forced induction gives the benefit of bigger power numbers but from a smaller, potentially more efficient engine. Though turbo lag might have historically been a problem, new turbocharger designs and mild-hybrid systems have massaged out most of the drawbacks. 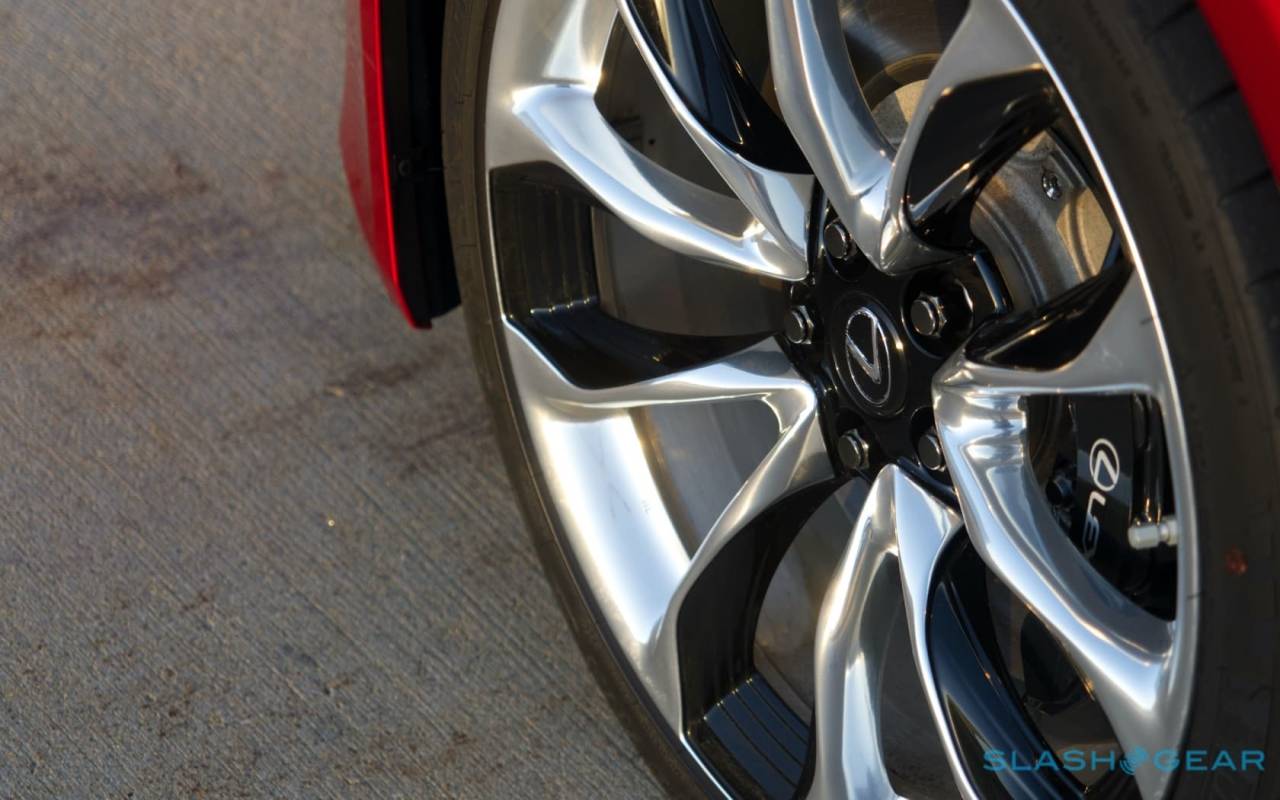 It leaves the free-flowing 5.0-liter V8 in the LC 500 Convertible something of an unusual choice, but one I’m still glad is out there. The power figures aren’t outrageous – 471 hp and 398 lb-ft of torque put down through the rear wheels – but they’re enough for a 4.6 second 0-60 time and a 168 mph top speed. Better still is the soundtrack, with the open roof letting in more of that V8 bellow. Lexus tamps it down a little too much, even in the most potent Sport S+ mode, for my liking, because it’s a bonafide joy.

Lexus makes a hybrid version of the LC, though only in coupe form, and frankly I’m not a fan. You lose the V8, with the LC 500h instead packing a 3.5-liter V6 and an electric motor sandwiched into the transmission, but the way it delivers power to the road can be frustrating. The languid drivetrain suits Lexus’ big luxury sedans, but it just doesn’t have the urgency that the LC deserves. 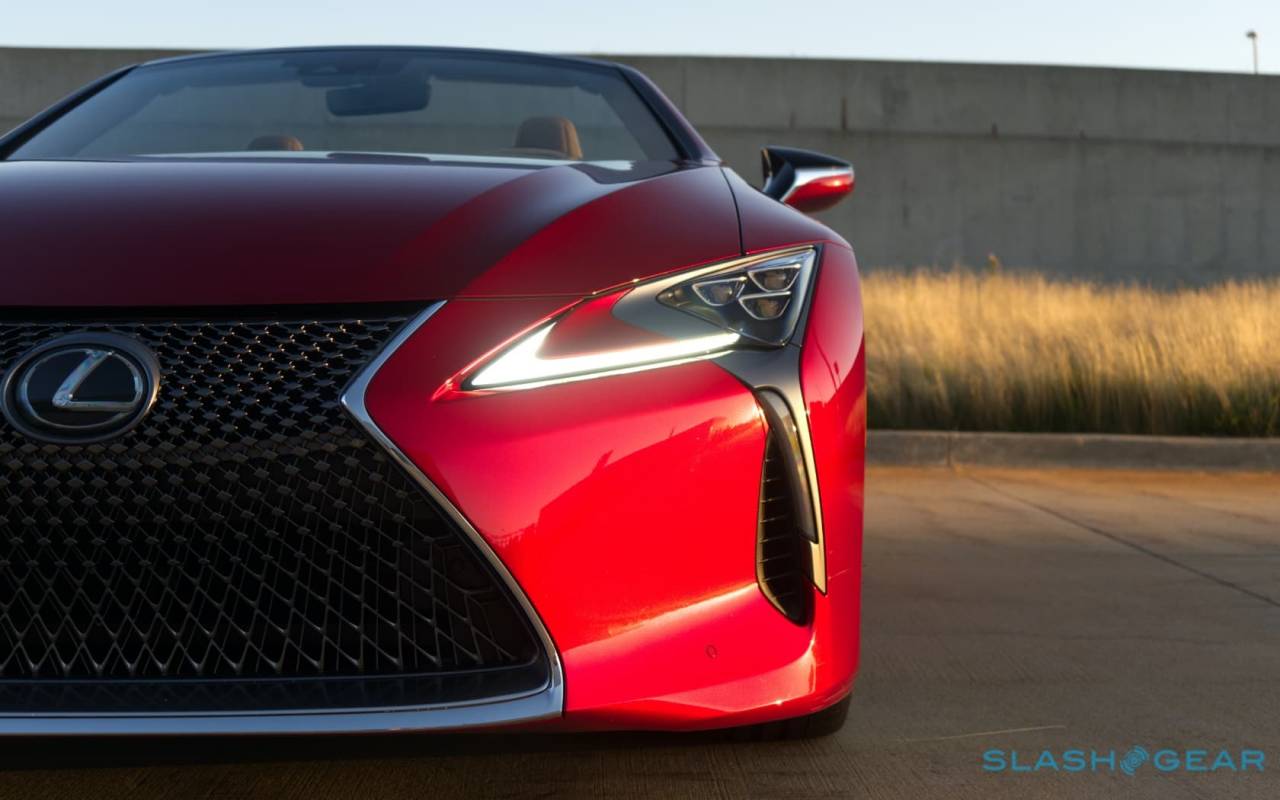 What it needs – and what the sci-fi styling is honestly crying out for – is a fully-electric LC. Fully-electric vehicles are conspicuous by their rarity in Toyota and Lexus’ stable right now, and I won’t argue that the LC would be a weird place to first look to changing that. All the same, as EV halo cars go, the idea of an LC EV would suit the Lexus’ temperament perfectly: a comfortable GT cruiser, with lashings of instant torque.

The LC’s cabin has always been a tale of two halves. First impressions are great: Lexus’ interior designers were allowed free reign, and the result is swooping shapes, quality materials, and incredible attention to detail. At $101,000, the LC 500 Convertible’s cabin puts supercars twice its price to shame. 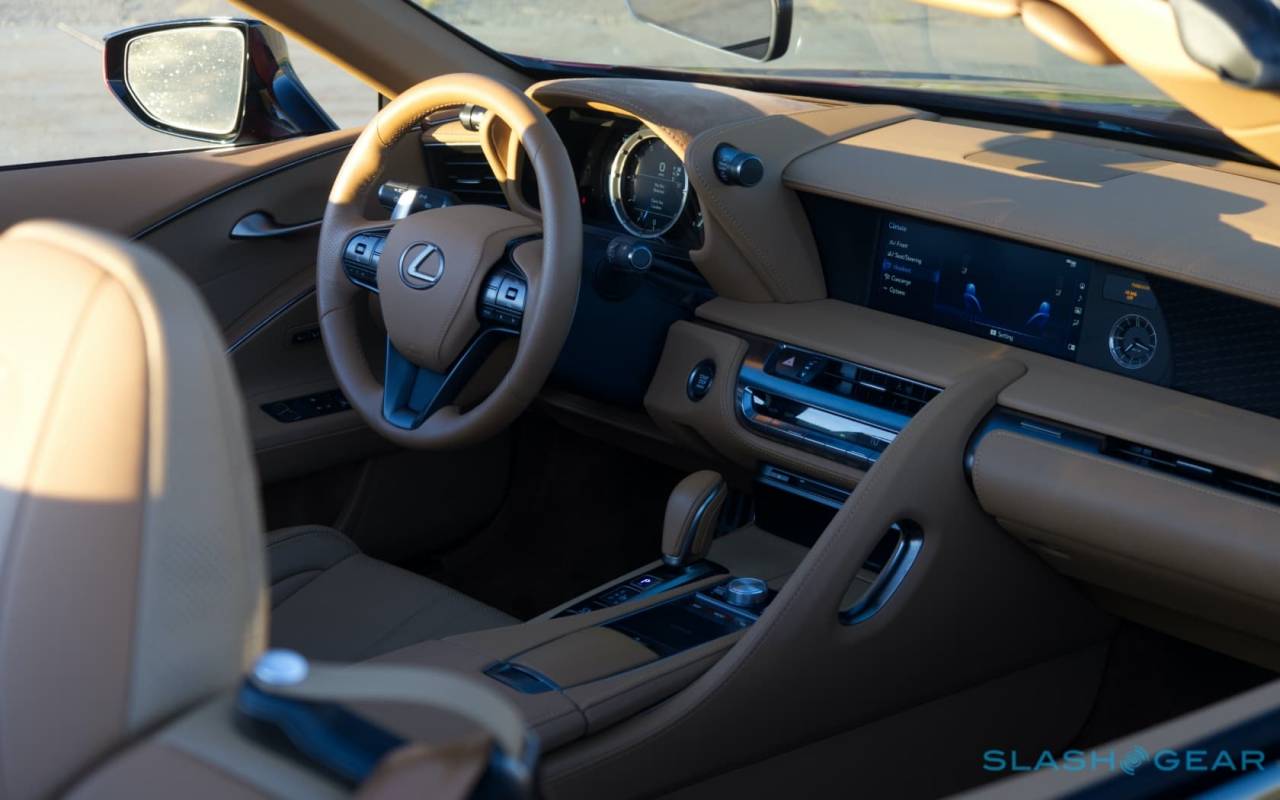 The downside, of course, is the technology, and the infotainment system specifically. It’s dreary to look at and convoluted to use, and if the LC is punching above its weight in fit & finish, then it’s only fair to point out that its multimedia and navigation interface is bested by what you find in some low-cost hatchbacks and crossovers.

Apple CarPlay and Android Auto help there some, though you still have to use them through Lexus’ annoying little trackpad. The problem the LC 500 Convertible faces is that its competition is getting better. 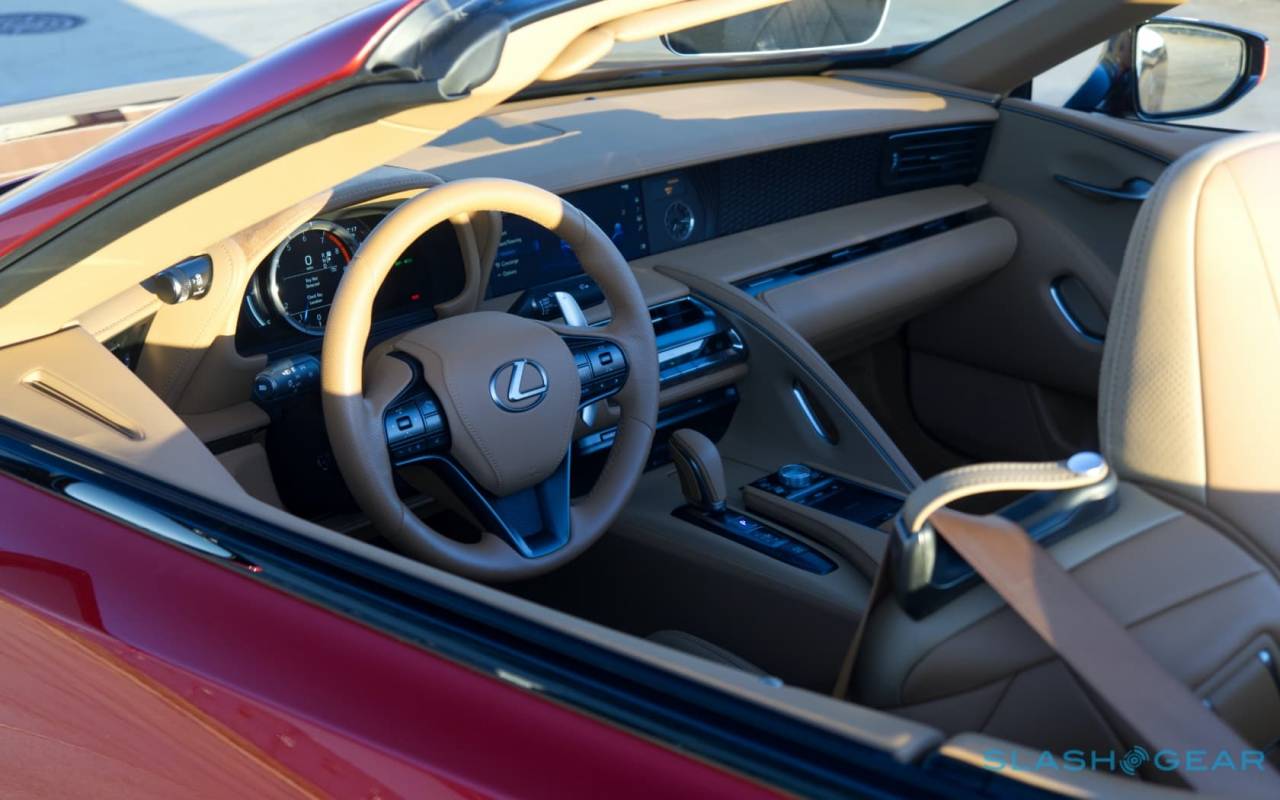 Set aside the Germans for a moment. There’s not a huge number of direct rivals for the LC droptop’s crown, but it won’t always be that way. For instance, Lexus – and the LC specifically – really needs to hope that Genesis doesn’t decide to weigh in on the luxury two-door segment. Interiors like that of the new 2021 G80 show that it is more than ready to upset things when it comes to design and quality.

The idea of Lexus deciding to refresh the LC seems far-fetched. Sales so far this year are under 800 cars in the US and Canada combined: worth keeping it around as a slice of glamour in dealerships, but of questionable return to take into a new, second-generation. 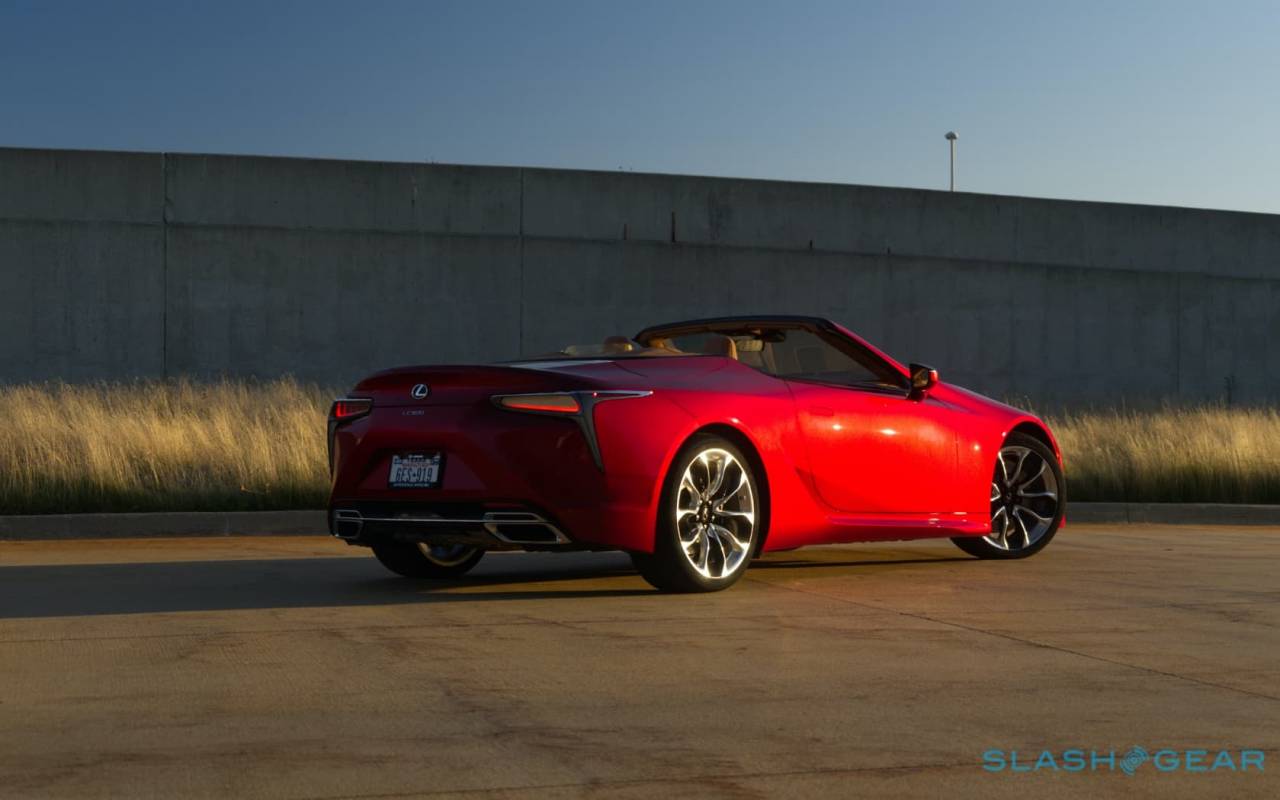 That leaves me sad, but unsurprised. The auto industry has to make tough choices like this all the time, and no matter how pretty a car might be, or how appealing the LC 500 Convertible specifically, rational thought wins out.

Really, though, that’s all a problem we can leave to think about another day. Better, for now, to look at the incredible way Lexus took a concept-made-real and reshaped it into a convertible. To marvel at the competitive pricing, and enjoy one of the few droptop naturally-aspirated V8 experiences still out there on a new car. And if sales are low, well, let’s embrace that too: it makes the 2021 LC 500 Convertible not only alluring but rare, too. Lightning may not strike twice, but I’m grateful Lexus bucked expectations in the first place.