It’s four years since we first saw the production version of the LC 500. Eight years since the unveil of the original LF-LC Concept on which the coupe was based. I’m struggling to think of another current vehicle that still looks so fresh and startling: familiarity may not always breed contempt, but it does tend to soften the impact.

The LC 500’s naturally aspirated 5.0-liter V8 is a rarity in the car world these days. Turbocharging is the name of the game right now, allowing for boosted performance while still returning reasonable economy (at least, when you have a light right foot). Instead Lexus opted for pure displacement, and though there are arguments for and against that, I love that it’s still an option for keen drivers. 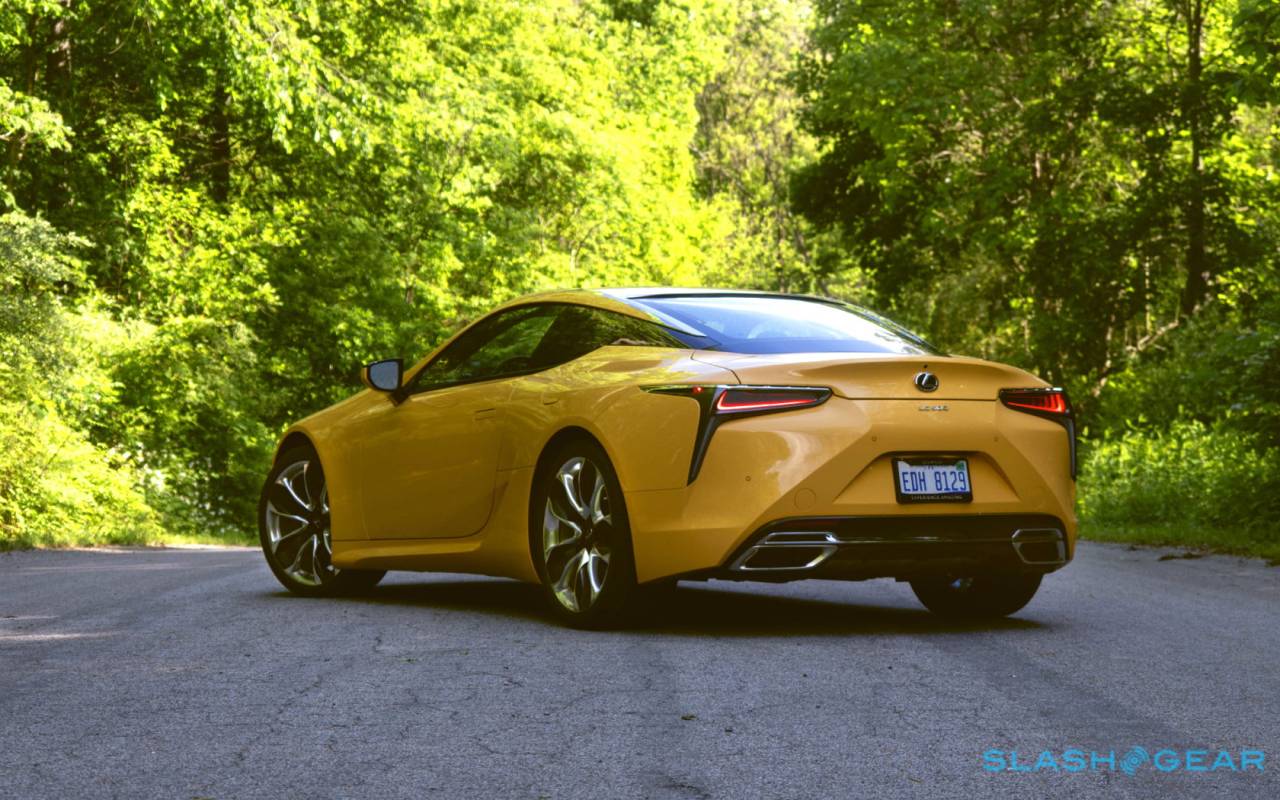 You get 471 horsepower and 398 lb-ft of torque, and a power delivery curve that climbs with the grace of a ski jump. The redline arrives at 7,300 rpm, at which point the LC 500 is bellowing beautifully. Temper your aggressions, meanwhile, and this is a sublime GT with just the right blend of purr and gurgle. The switchover point is around 3,500 rpm, easy enough to avoid when you’re trying to be a good neighbor, but readily achieved when you’re pushing hard.

Lexus even figured out how to get its V8 to flip between the Otto performance cycle and the Atkinson economy cycle; 16 mpg in the city and 25 mpg on the highway aren’t going to win the LC 500 awards, but it’s not as thirsty as you might expect. There is, of course, the LC 500h, its more expensive hybrid cousin, but I’ve never been a fan. The gas and electric parts never seem quite like they’re working together properly, and the transmission is frustratingly jerky. 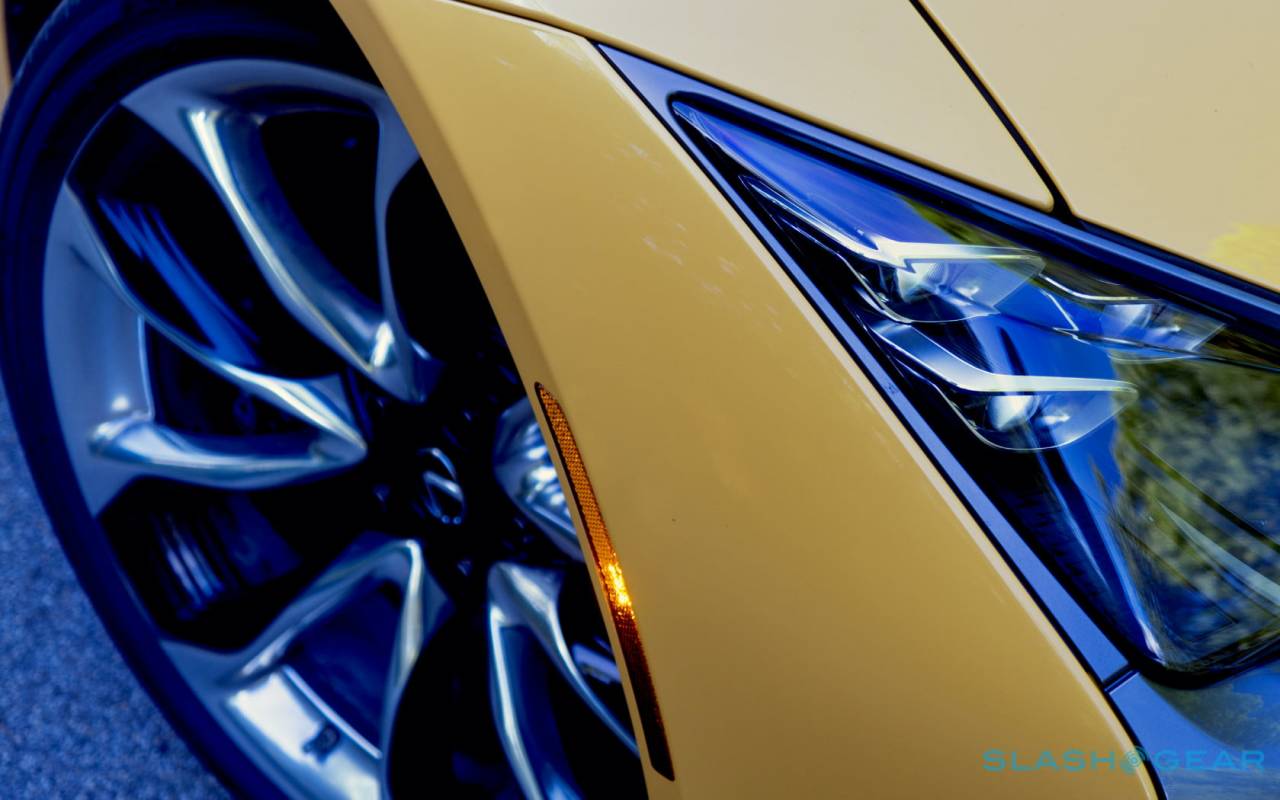 The LC 500 gets a more normal 10-speed Sport Direct Shift automatic. It shuffles through its ratios with reasonable speed – 0-60 mph comes in 4.4 seconds, while maximum pace is limited to 168 mph – and Lexus sensibly caps it at 7th and 6th gears in Sport S and Sport S+ modes, respectively. That way you’re not left flailing at the crisp metal paddles to downshift into a gear vaguely suitable for aggressive cornering.

Rear wheel drive and adaptive variable suspension are standard; the $5,960 Performance Package adds active rear setting, variable gear-ratio steering, and a speed-activated rear wing, while $390 gets you a limited slip differential. No fancy air suspension, then, but there’s no sense that the LC 500 actually needs it. Things are firm enough in the corners to avoid body roll, supple enough to avoid shaking out your teeth, and and the whole thing just feels poised and self-confident. 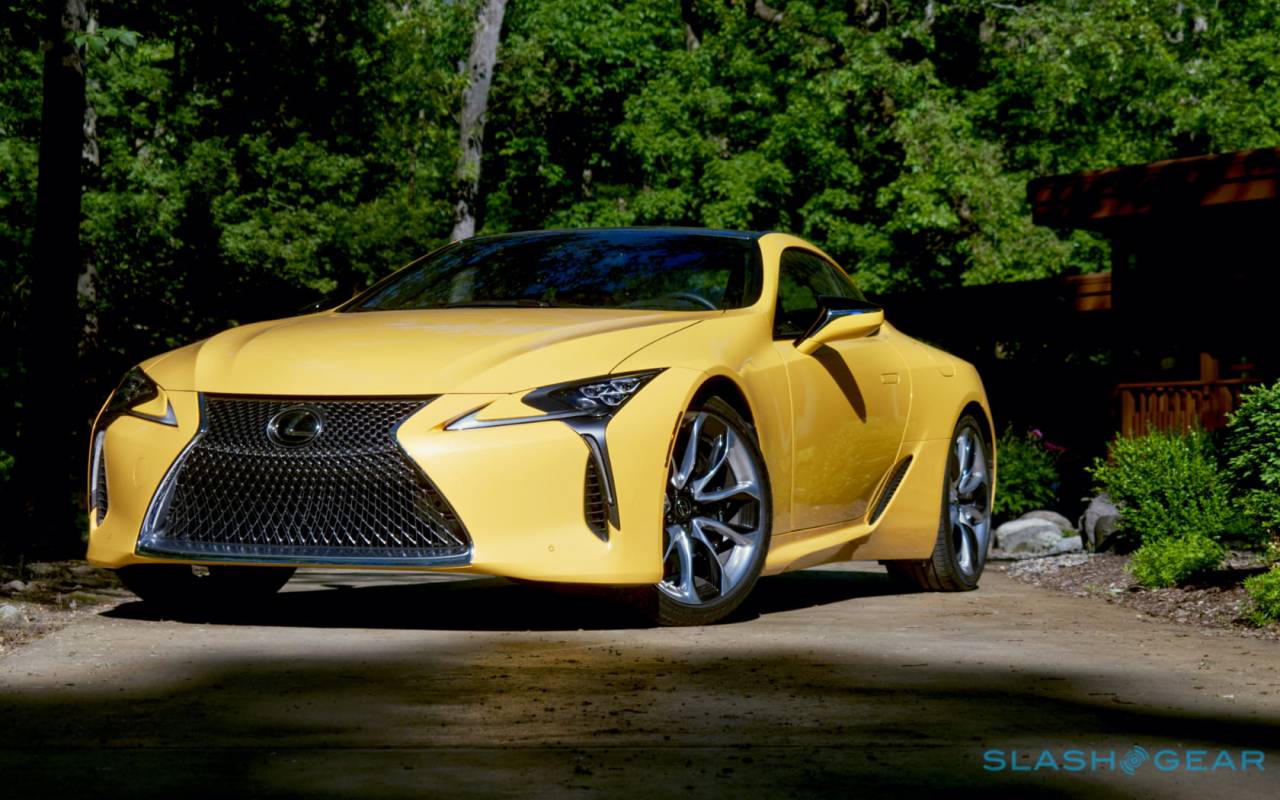 You could say the same for the design. The $595 Flare Yellow paint – which I’d say is more Dijon mustard – probably helps, but I suspect regardless of finish the LC 500 would get the same reaction. Heads cranking around on necks; the occasional smartphone camera hastily pulled out and pointed in your direction. The proportions may not be quite so shocking as they once were, particularly the scale of the oversized grille which other cars have since caught up with, but their combination remains mesmeric.

How that’s possible with a $94k starting price beggars belief, though get up close and there are areas where style has clearly taken priority over substance. The rear lamp clusters look great at a distance, their deep 3D illumination fit for a 50s sci-fi rocket ship; nearer, however, they look plasticky. Shiny trim around the headlamps and grille, meanwhile, doesn’t seem quite so premium when you’re inches rather than feet away. 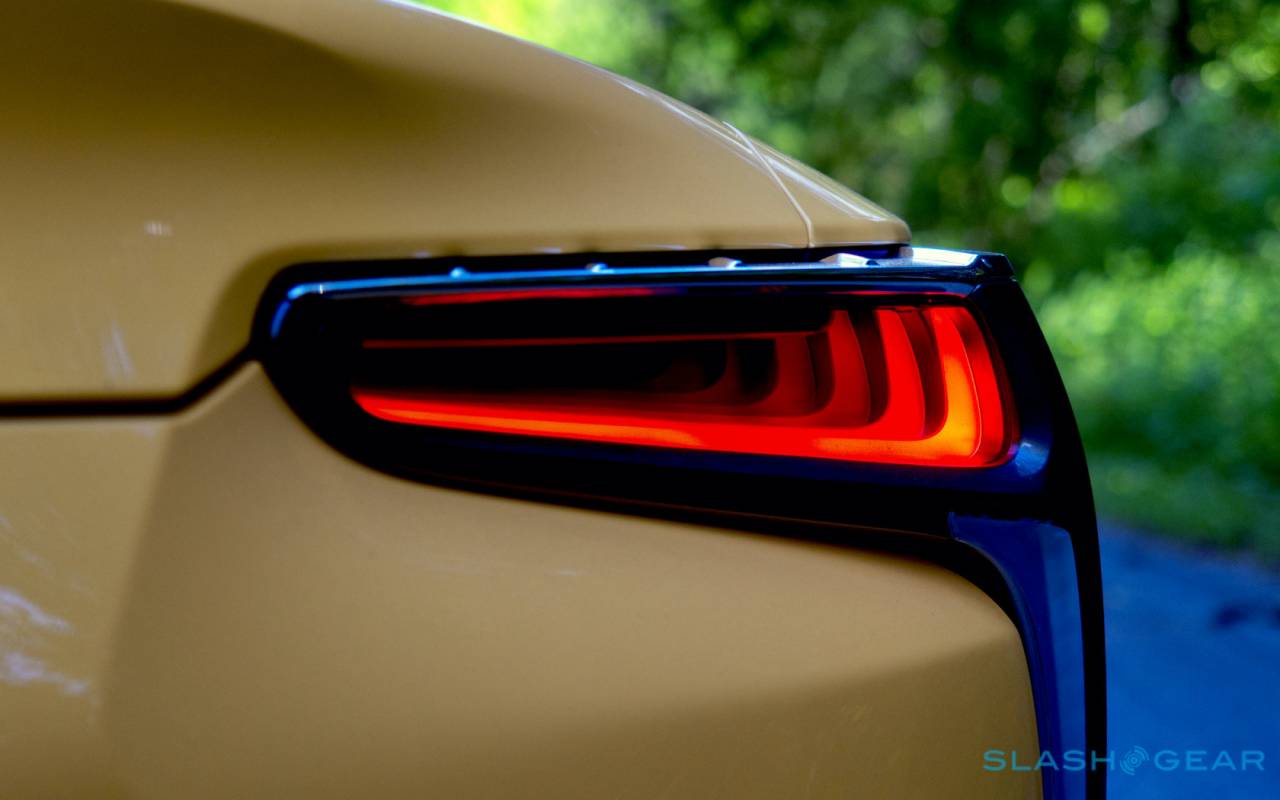 The same can’t be said about the interior, which is a triumph of materials. The Performance Package – adding Alcantara sport seats, among other interior tweaks – doesn’t hurt, but even in standard form the LC 500’s cabin is a gem. Enough curves and swoops to leave it feeling wombishly-cosseting, wrapping around the driver and front passenger with a swathe of supple leather and real metal.

The rear seats are… present, if only in name. Best to treat them as an extension of the snug trunk, which holds 5.4 cubic feet and is tricky to load thanks to a very small lid. Officially the LC 500 is a 2+2, but even kids aren’t especially welcome in the back thanks to the chunky front seats leaving little room to clamber in and out. 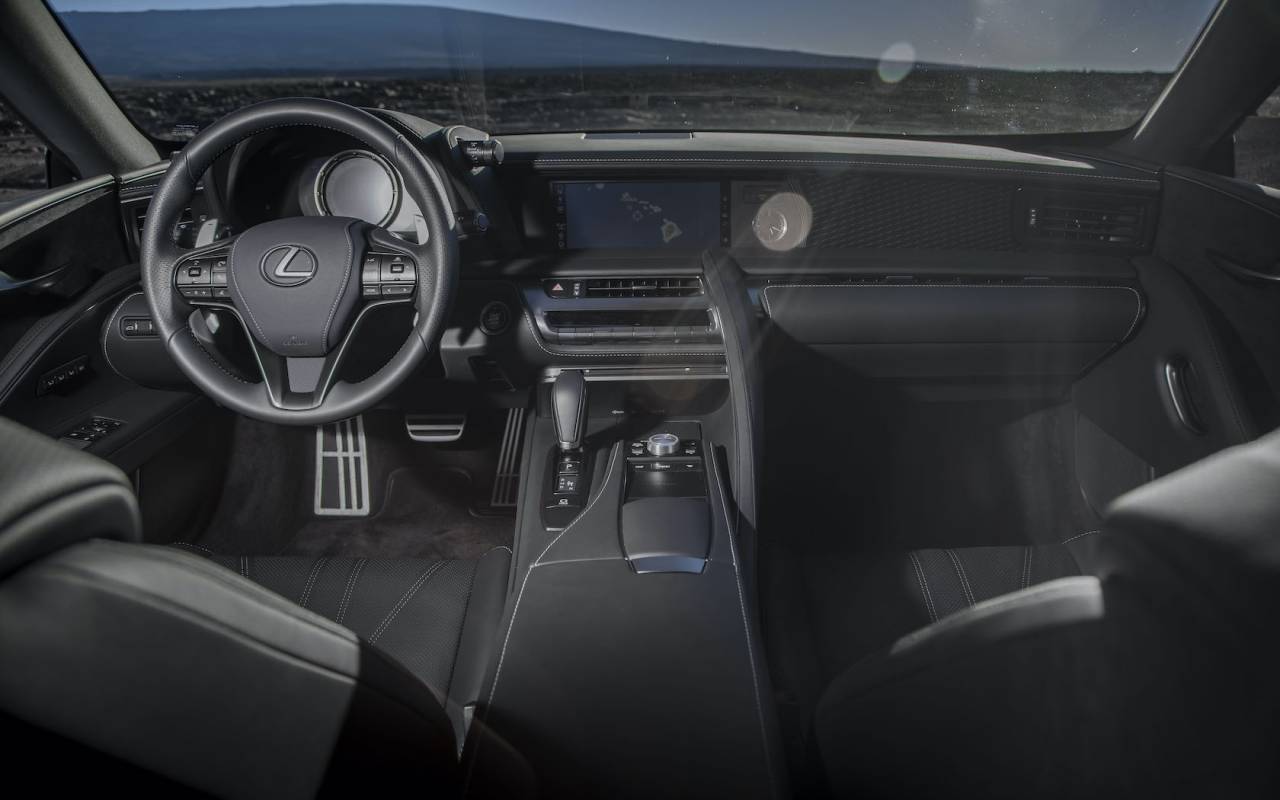 That pales in usability-crime levels compared to Lexus’ infotainment system, mind. The perennial complaint about the coupe, it’s not so much that it looks bad – the graphics on the 10.3-inch widescreen display are crisp and easy to read – but that it’s an almighty pain to use.

Without a touchscreen, you’re left swiping at Lexus’ touchpad in the center console to navigate. That buzzes as you slip between on-screen UI elements, but the haptics aren’t quite enough to stop you regularly over-shooting whatever you’re aiming for. Lexus surrounds the pad with some physical controls, and you can manage the core HVAC settings via dedicated buttons too. Anything more though, like adjusting the seat heating or cooling, demands sifting through the LC 500’s menus. 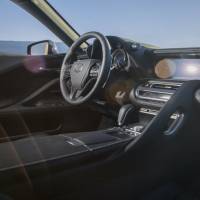 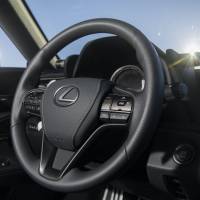 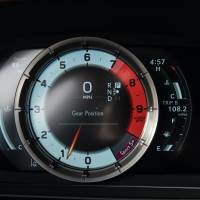 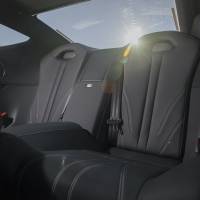 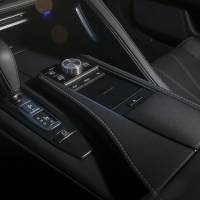 You can, at least, plug in an iPhone and get Apple CarPlay instead. Android Auto isn’t on the menu, sadly. Lexus’ $1,220 Mark Levinson audio system sounds the equal of rival music upgrades in other cars costing four or five times the price, which is great. Its lack of a top-down 360 camera option – the best you get is a reversing camera and bleeping parking sensors – is less impressive.

It’s hard to imagine Lexus spending the time and money on changing that, or indeed giving the infotainment system the revamp it so sorely requires. It sells a handful of LC models each month – 56 of them in March 2020, for example – and though the halo is bright, it’s probably not quite bright enough to justify such a refresh. 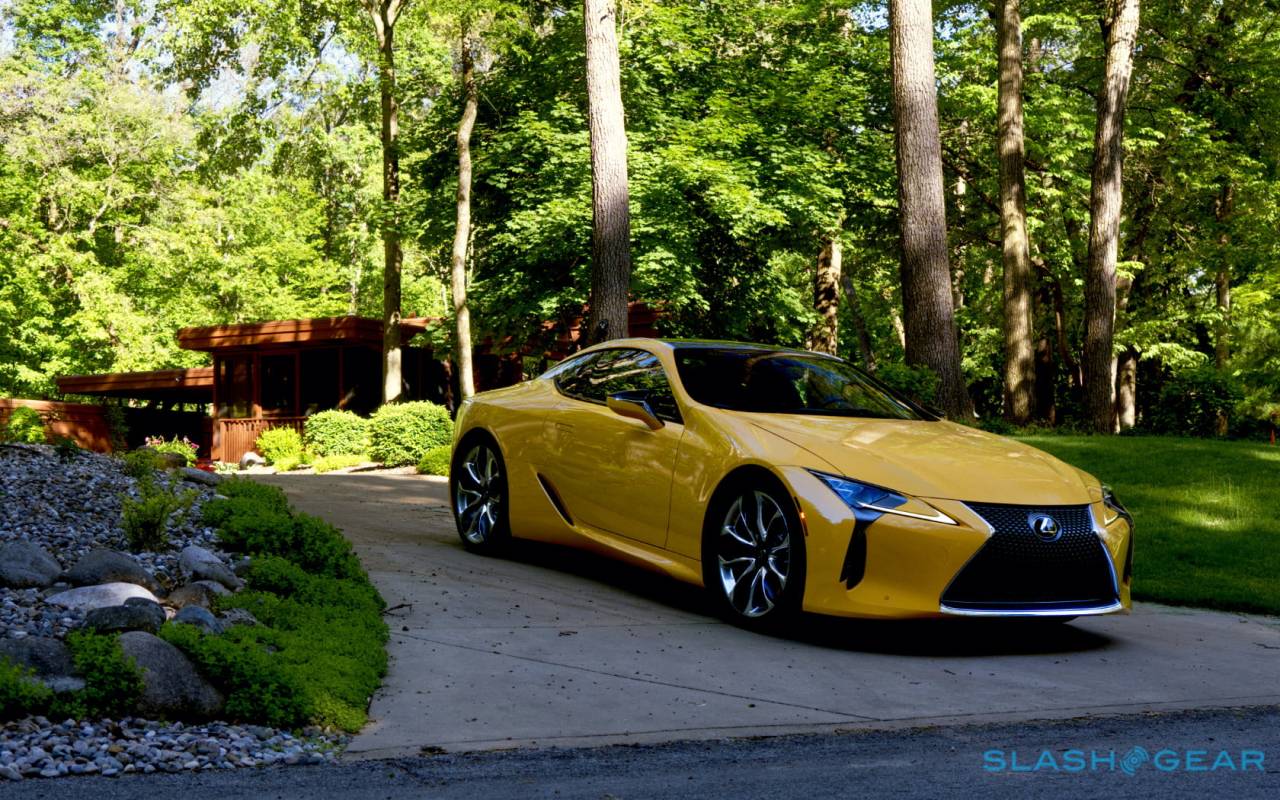 That – even with a painful infotainment system and some shortcomings in practicality – the LC 500 is still so appealing is testament to Lexus’ ability to nail the essentials. It looks like a GT coupe should, it drives like one, and it sounds like one. Sure, Normal and Comfort modes might allow you to hold more mundane roads at arm’s length, but clack the stubby mode dial into Sport S or Sport S+ and there’s incontrovertible proof that Lexus understands chassis dynamics, even if it normally applies that wisdom in the name of sybaritic luxury.

Those looking for the keys to a new luxe GT aren’t short of options today. Many have more power, more cabin space, and more up-to-date tech than the Lexus, too. Still, for that feeling of driving a concept car made real, and the soundtrack to match, the LC 500 remains pretty much in a category of its own.