Just when we thought Ford thought of everything for the reinvented Bronco, along comes Saleen Big Oly Bronco. It’s barely 24 hours seen Ford unveiled its newest Bronco midsize SUV, but the speed freaks at Saleen were quick enough to create a tougher, meaner, and more rugged Bronco. 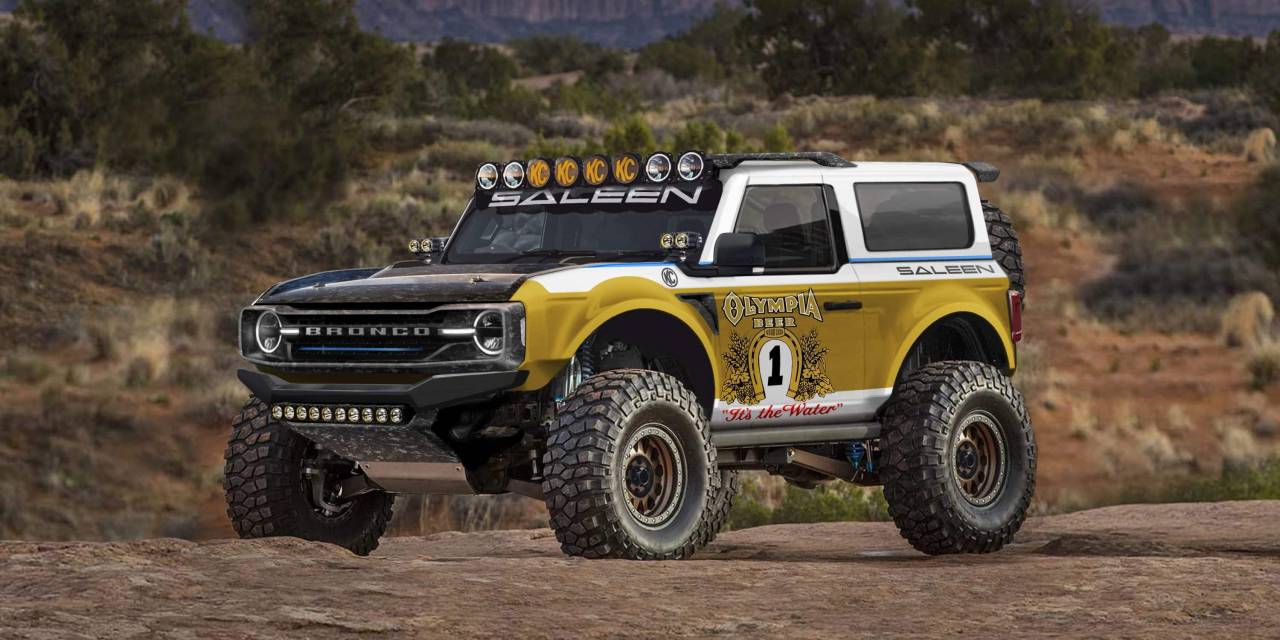 For those old enough to remember, Parnelli Jones and his 1970 Big Oly Bronco won back to back victories at the grueling Baja 1000 in 1971 and 1972. Both wins were enough to catapult the Ford Bronco to its iconic status as the most well-known and respected off-road vehicles of all time. 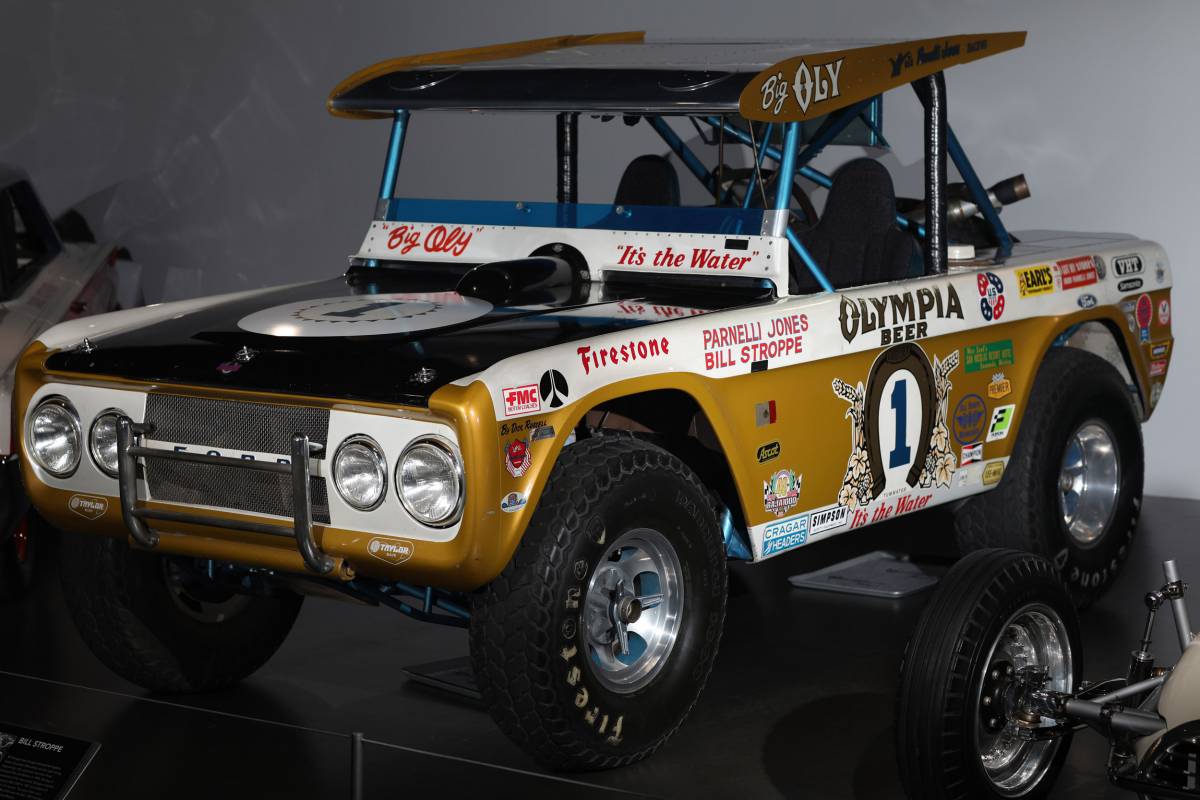 True to form, the Saleen Big Oly Bronco is wearing the familiar gold and white livery of Jones’ Baja-winning Bronco truck. Specific details are scarce at the moment, but Saleen is kind enough to divulge what’s new in its Big Oly Bronco. For starters, the vehicle has a bespoke front bumper with ten – yes, 10 – integrated LED fog lights.

It also has a new Saleen front grille with blue Baja accents and a forged carbon surround. You’ll also find a new Saleen ‘Power Hood’ along with composite front fenders with carbon fender vents. And since we’re talking about the 2021 Ford Bronco, Saleen’s Big Oly Bronco also has removable roof panels and a modular roof rack.

Racing in the desert at night is no easy feat. Hence, the Saleen Big Oly Bronco has dual A-pillar mounted LED driving lights and a roof-mounted Pro 8 light bar with – you guessed it – eight auxiliary lights. Rounding up the ‘desert racer’ theme is an adjustable roof spoiler, deep-dish off-road wheels, chunky all-terrain tires, and a rear spare tire carrier. 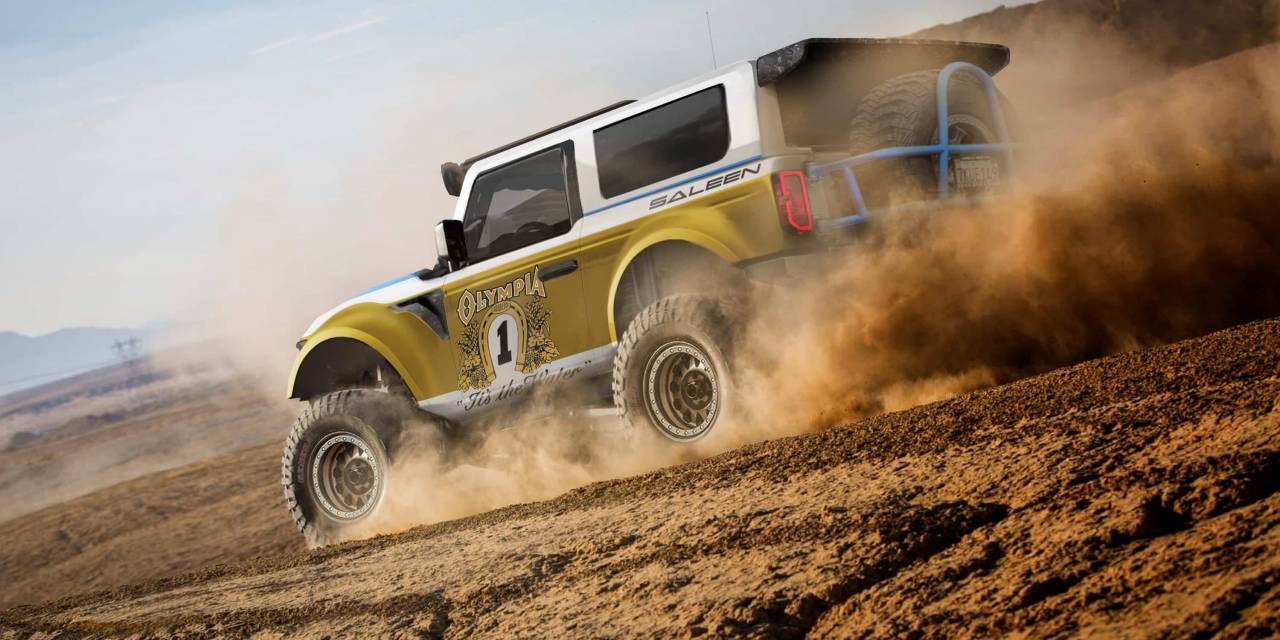 Interestingly enough, Saleen made no mention of engine upgrades, but we’re expecting nothing less. The 2021 Ford Bronco is equipped with either a 2.3-liter turbo four-banger or a more powerful and torquey turbocharged V6, the latter of which is primed for some supercharged action. If you fancy a retro-inspired Bronco, you can request a quote at Saleen’s official Bronco webpage.