An extra fifty cents worth of sensors and your iPhone 5s could have read your emotions rather than just track exercise and fitness, chip manufacturer Freescale says, predicting a time soon when smartphones will know more about our moods than our friends and families do. The iPhone 5s’ M7 co-processor, added by Apple in its latest smartphone iteration, is just a few senses away from a whole new level of understanding about its owner, Kaivan Karimi, executive director of global strategy and business development at Freescale Semiconductor, suggested today.

Those particular sensors, the executive explained, consist of a two-electrode ECG on a chip, along with a capacitive sensor to measure sweat. Information from the two would be pulled together with the sort of accelerometer, magnetometer, and gyroscope data chips like the M7 already gather, using what Karimi described as a “new sensor fusion algorithm.”

“You can monitor the emotions of the individual, with pretty much $3.50 worth of sensors” Karimi said during a presentation at the Mobilize conference in San Francisco. “You can track their emotions using their gadgets, and if they’re connected devices then you can track them remotely.”

The result could be an iPhone or Android device that would monitor the mood of the person using it and react accordingly, since “your device will understand you better than you yourself do, than your loved ones do” Karimi argued.

Exactly what could be done with this data is a broad topic, though the Freescale executive touched upon the potential dangers of third-parties having access to sensitive biometric information, and the possible shortcomings of today’s privacy polices. However, such a “subconscious understanding” of how emotions fit into everyday life could be turned to the advantage of health tracking significantly more in-depth than wearables like Fitbit, FuelBand, and even Adidas’ new miCoach SMART RUN watch which has an integrated pulse sensor. 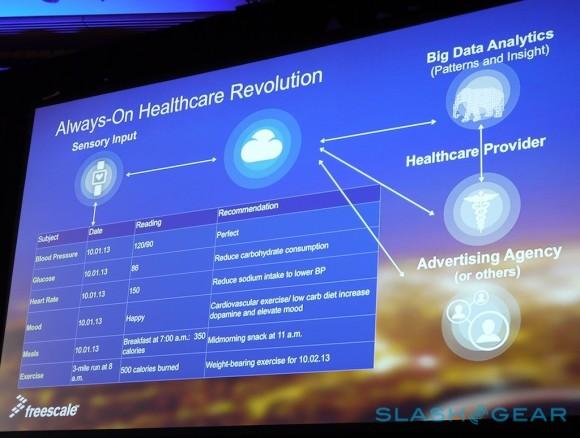 For instance, in addition to tracking exercise, the device could look at blood pressure, glucose levels, heart rate, and overall mood by taking continuous readings throughout the day. That information could be processed in the cloud, and then filtered out to third-parties; they might be healthcare providers, services using big data analytics – like Google Calico, for instance, which is expected to use complex pattern processing to model more healthy lifestyles and genetics – and even advertising agencies.

Although Freescale billed the system as a likely progression of the smartphone, there are other possible form-factors that could use similar technologies. Motorola Mobility, for instance, is working on ingestible “smart pills” that could track health over a period of several days. The company is also researching digital tattoos that some predict are the likely future of wearables.

For the moment, Apple is using the M7 for basic step-tracking, as well as automatically switching between driving and pedestrian navigation in Apple Maps. The sensor-chip is also used to track periods of minimal use, such as overnight, and shift the iPhone 5s into a low-power state to preserve battery life.