Motorola dropped some jaws this week, when Advanced Technology and Projects Group chief Regina Dugan revealed the company’s tinkering on digital tattoos, week-long implanted electronics that could free you from the tyranny of remembering passwords. Dugan – a former DARPA head – described the tattoo as perfect for a wearables market targeting users that don’t actually bother wearing watches any more, instead turning the body into a walking authentication token. She also namechecked mc10, a company not unfamiliar to SlashGear, as the brains behind the flexible tattoo-tech, but just what’s inside?

Cambridge, MA, based mc10 calls the tattoo “epidermal electronics”, and has in fact been working on the concept for some years now. The idea is relatively straightforward: rather than rely on the user carrying a device, or remembering to strap one on each morning, the technology is temporarily bonded to their skin.

That bond has another advantage, since the responses of the wearer’s skin can also be used to collect health data. The tattoo is made up of various sensors and gages, such as for tracking strain in multiple directions (how the user is flexing), EEG and EMG (electrical impulses in the skeletal structure or nerves), ECG (heart activity), and temperature, as well as light and other factors. In total, it’s a mini-lab for your arm, the side of your head, or anywhere else on the body. 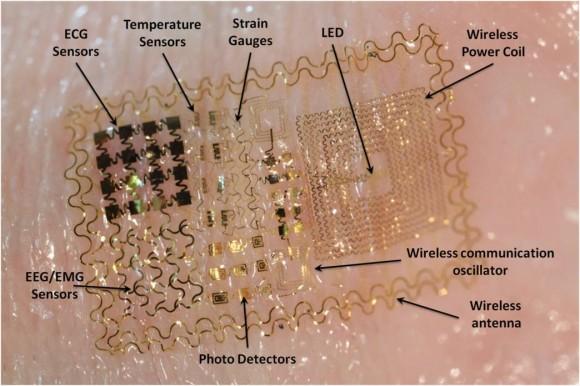 Like NFC chips, the mc10 epidermal electronics get powered up from an external electricity source, using the embedded wireless power coil. It’s a similar system to the wireless phone charging Nokia and others have implemented in recent handsets, and it powers the tattoo’s transmitter. That’s all layered onto a sheet of water-soluble plastic that gets laminated to the skin; in fact, it can even be disguised with a regular temporary tattoo pattern, opening the door to potential branding and such.

Once they’re in place, they’re incredibly resilient. The tightly coiled structure of the electronics means that, even if the tattoo is stretched or twisted, the connections won’t break. It’s also waterproof, which means that even if you’re swimming or in the shower, the tattoo won’t be affected. 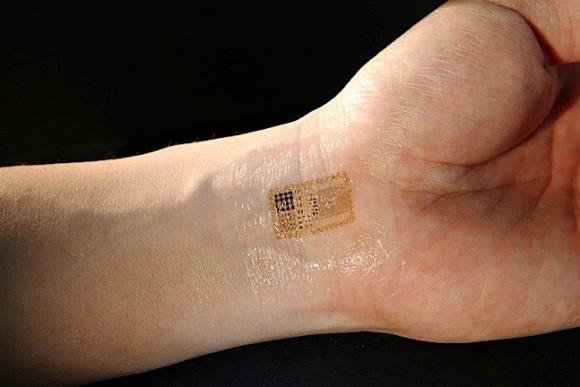 However, epidermal electronics don’t just have to stop at being biometric keys for your laptop and your Netflix account. Studies using the technology have found that they can also track muscle movements around speech, when applied to the throat, potentially turning the tattoos into half of a wireless hands-free kit. Since you don’t actually have to speak out loud, it could pick up sub-vocal commands, too. Alternatively, they can even track brain signals with enough accuracy to control a computer, which might mean simply thinking about making a call and having your nearby smartphone place it. Similar sensors have been used to fly remote-control planes and drones, something mc10 is working on replicating with its more compact tattoos.

They were some of the possibilities mc10 co-founder Ben Schlatka spoke to us about last year, when we talked to him about the advantages of persistent sensing. The company is also working with the US army on embedded electronics in battlefield clothing, which could collect energy and convert it into electricity to power the gadgets soldiers carry.

“Imagine a kids’ fake tattoo that can sense how our bodies work: data from the heart, the brain, muscles, body temperature – even hydration levels,” Schlatka told us. “When a sensing technology conforms to the consumer and not the other way around, it can capture more insights for longer periods of time without discomfort or distraction.”

Motorola isn’t the only company intrigued. Back in April, mc10 announced it had closed a new $8m financing round, taking the company’s total Series C funding to $18m. Exactly which investors have come on-board is yet to be confirmed, though mc10 did say that it now has backers across its consumer, digital health, and medical devices divisions. 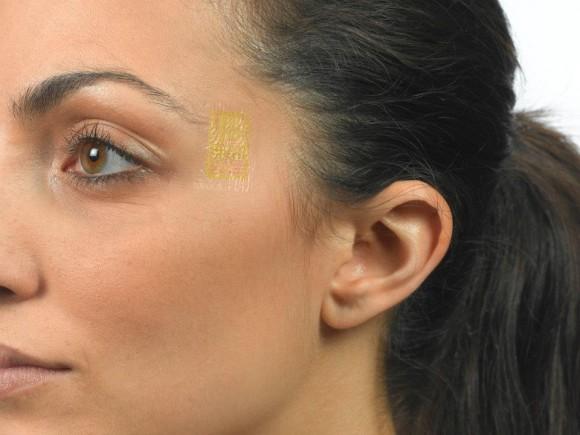 Whether Motorola will actually release a wearable using mc10 technology remains to be seen; the Google-owned company still needs to prove it has a solid foot in the smartphone market, though the new Moto X could address that. Still, it’s clear that the digital tattoo is capable of further breaking down the boundary between users and their devices. If Motorola can leverage that, alongside Google’s own ongoing research into wearables like Glass, it could be the differentiator the company needs from the increasingly crowded Android market, not to mention finally silencing the critics who doubted the wisdom of the smartphone company’s acquisition in the first place.