First Twitter, then Google, and now Facebook has waded into retrospective with its own “Year in Review 2012” reminiscipackage. As well as a full 2012 summary of the big trends as part of the social site’s Facebook Stories page, there’s also the option to see your own individual “biggest moments” from the year in a personal 2012 review.

Head to Facebook.com/yearinreview when you’re signed into your own account, and you’ll see the top twenty items from 2012. That could include life events such as pregnancy or marriage, any highlighted posts, and the popular stories you shared. 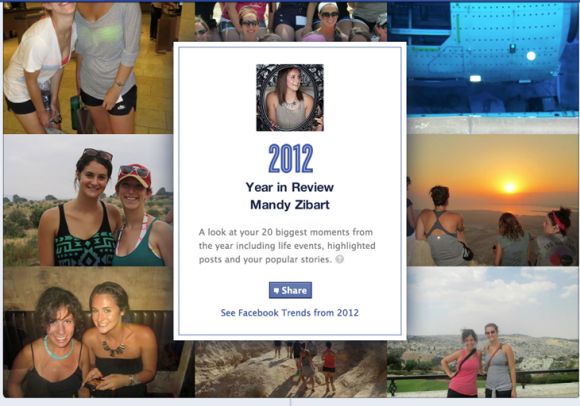 Facebook has also come up with some lists of the top ten US trends. Under tech, Instagram and Timeline take the number one and number two spots, with Pinterest and Draw Something in the third and fourth spots respectively. It’s only when you get to fifth place when a piece of hardware grabs the spotlight – Apple’s iPhone 5 – and the Kindle Fire is right behind it in sixth position.

Elsewhere, just as we saw from Twitter and Google, Obama and The Hunger Games rated highly – the latter as both a book and a film – while notable events included the death of Whitney Houston and the Facebook IPO itself. There are also trends broken down by other locations.