It’s only once a year that Twitter recollects the best of the best, and this year – like many years before – has been the best of the best in and of itself. Here in 2012 the folks at Twitter have created a collective experience that shows off the most engaging experiences from the past 300+ days as well as some of the most important moments that’ve happened “Only on Twitter” straight from the people that use the service to engage the world on a daily basis. Everything from President Barack Obama celebrating Four More Years to a Tweet from Mars!

It all the way over at http://2012.twitter.com/ that you’ll find first the most Tweeted Tweets of the year – and incidentally of all time, too. The top two tweets of the year were from Barack Obama and Justin Beiber, with Beiber’s contribution being a goodbye well-wishing for a young fan that passed away due to a rare brain cancer. Three Honorable Mentions included a word from Packers football player TJ Lang about the Replacement Referees incident, another from Team GB about how Britain had their most successful Olympics in 104 years, and a massive tweet from Anime voice actor Koichi Yamadera about marrying fellow voice actor Rie Tanaka. 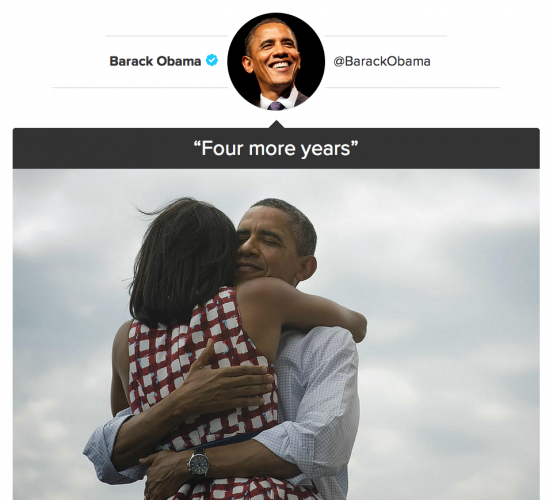 Twitter let loose a Pulse of the Planet listing showing off some of the biggest conversations had in Twitter over the months leading up to 2013. This list includes SOPA/PIPA, Whitney Houston’s passing, Anime hit “Summer Wars”, UEFA Champions League Semi-Final, Superstorm Sandy, the Euro 2012 match lineup, the USA Super Bowl, the MTV Video Music Awards, the USA Presidential Election, and the Summer Olympics. Read about the wild event that occurred surrounding Summer Wars to get an idea of what Twitter has become – a massive conduit!

In Twitter’s “Only on Twitter” collection you’ll find moments of serendipity, examples of what Twitter says are “Tweets that came to life organically on Twitter, and can be appreciated in an instant.” This includes the Mars Curiosity landing, the ISS collection of images of Superstorm Sandy, live tweets from an underwater camera taking photos from the bottom of the pool at the London Olympics, live tweets made by Japanese mountaineer Nobukazu Kuriki on his way up Mount Everest, massive amounts of photos from fans watching the space shuttle Enveavour on its final ride to Los Angeles, and of course the tweet from James Cameron as he reached the deepest part of the ocean at 35,755 feet below. 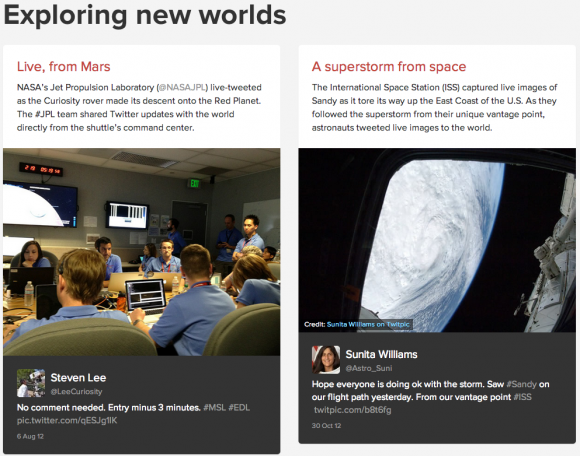 Top trends as well as New Voices are shown as well, this including some of the top names that’ve joined Twitter in the year 2012. Join Twitter and SlashGear in a celebration of one of the most fabulous names in social networking in the history of the internet, and here’s to a great 2013! Follow us at @SlashGear and don’t forget Android Community too at @Androids!