Facebook’s photo transfer tool, which allows easy exports of any media uploaded to the social network, has rolled out globally the company has confirmed today. Announced back at the tail-end of 2019, the tool launched initially in Ireland as a way for Facebook users to move all of the photos and videos they’ve added to their profile to Google Photos, without having to download the archive first.

By April 2020, Facebook users in the US and Canada had access to the tool. Now, Facebook confirmed today, it has made the system available globally to all its users.

To use it, you’ll need to be logged into Facebook and go to the “Your Facebook Information” section in the settings menu. There should be a “Transfer a copy of your photos or videos” option listed; clicking that, and then re-entering your Facebook password, will initiate the transfer. Right now there’s only one potential destination, Google Photos; you’ll need to enter your account information for that, too, and then the transfer will proceed. 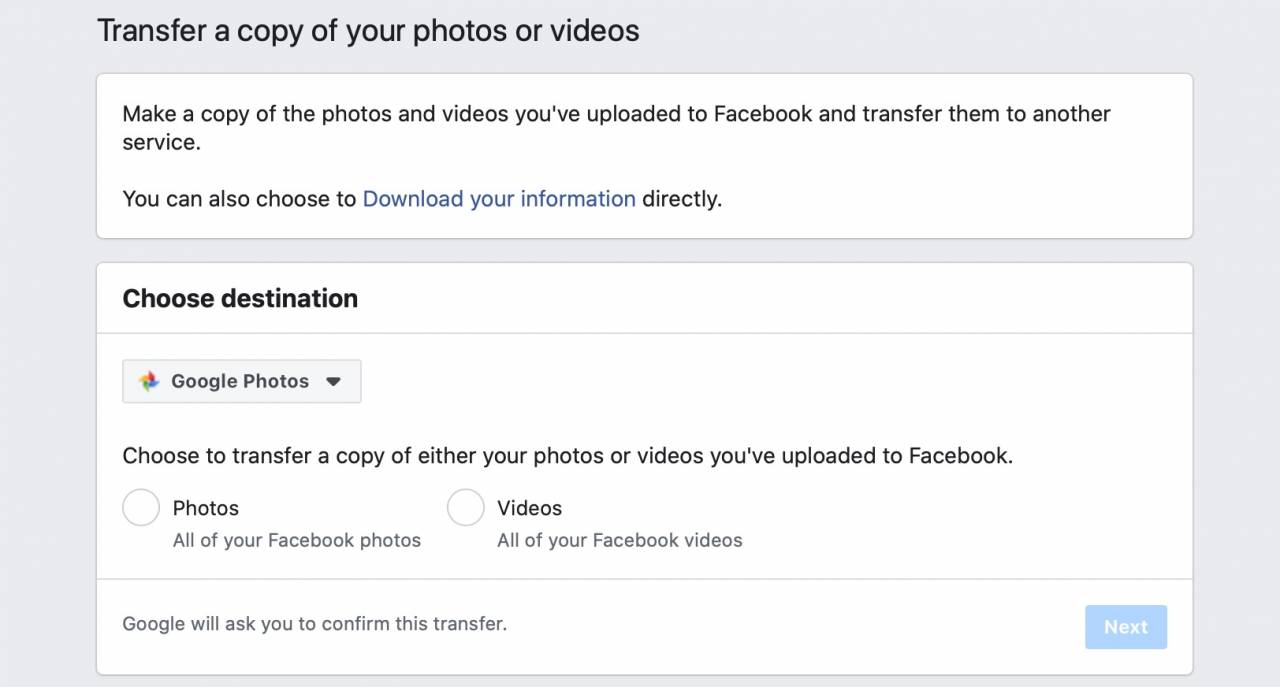 It’s not an instantaneous thing, and Facebook sends out a message via email to confirm when the process has been completed. Eventually, Facebook says, it plans to add more destinations beyond just Google Photos.

The export tool is a good place to start if you’ve considered deleting your Facebook account, something that has been topical in recent weeks over the social network’s handling of recent posts by President Trump. CEO and founder Mark Zuckerberg has faced criticism – from both outside of the company as well as from employees – for leaving up posts by the US president that were considered by many to advocate violence against anti-police-brutality protestors across US cities.

While Twitter opted to flag Trump’s tweets with a cautionary message, warning that they contravened the site’s policies on promoting violence, Facebook took the opposite stance. Zuckerberg has argued that, while the President’s posts may be personally distasteful to him, they do not warrant being removed. The decision has led to fierce outcry.

Earlier this week, Facebook added a new tool to archive or trash old posts shared on users’ walls. Though Facebook probably didn’t intend it to coincide, this broad rollout of the photo transfer tool may end up being the last piece of the puzzle some dissatisfied users need to finally oust their account on the social network altogether. That’s not a process Facebook makes especially straightforward, mind.