This was a huge week for gaming news thanks to the biggest gaming event of the year—the E3 2011 conference held in Los Angeles. Now the event isn’t quite over yet, but most of the major announcements that we’ve been eagerly anticipating from Microsoft, Sony, and Nintendo are already out of the bag. So here’s a roundup for the big three.

On Monday, Microsoft had their XBox 360 and Kinect presentation where they demoed several major titles including Call of Duty: Modern Warfare 3, Tomb Raider, and Mass Effect 3. Almost all the new titles featured support for Kinect, with Mass Effect 3 even offering Kinect Voice controls. You can command your co-op fighters with your voice for gameplay interaction at a new level.

Microsoft also unveiled a revamped Xbox Live with a new UI that looks similar to that of Windows Phone 7 and the upcoming Windows 8. New features include YouTube and full Kinect support with Bing. Emphasis was placed on the Kinect eventually replacing your remote in the living room such that you can choose channels or movies to watch, search YouTube, access Netflix, or even launch a game in XBox Live, all just by your voice without the need of a remote. These new developments should arrive this fall.

A whole bunch of games including popular EA Sports franchises Madden NFL, FIFA World Cup, and Tiger Woods PGA Tour are all adding support for voice and motion control. Tom Clancy’s Ghost Recon: Future Soldier was demoed showing new motion controls such as adding attachments to your weapons, choosing weapons, and spreading your arms to get a blown out view of all attachments. Other games to get interaction-heavy with Kinect are Star Wars, Ryse, Forza Motorsport 4, Fable: The Journey, Minecraft, Disneyland Adventures, Sesame Street Once Upon a Monster, Kinect Fun Labs, Kinect Sports: Season 2, and Dance Central 2.

UFC Live was also announced for the Xbox Live, which will allow you to not only buy and watch UFC fights over your Xbox 360, but also let you select pre-fight who you think will win or lose and share your picks with your Xbox friends. 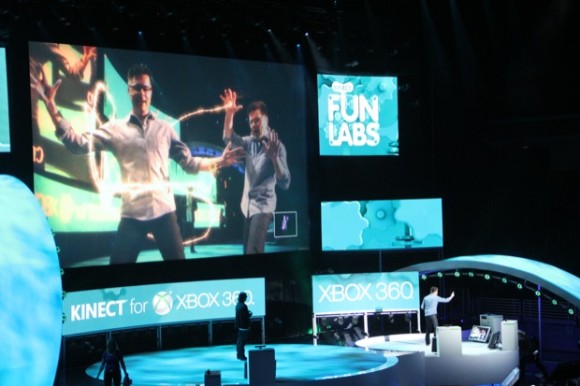 The focus of Sony’s press conference on late Monday was of course the unveiling of the next-generation portable, the NGP. But before we could get to that juicy bit, Sony first talked about all their developments in 3D gaming. They plan on having over 100 3D titles by next year. Some titles scheduled for later this fall include Resistance 3, Uncharted 3, Drakes Deception, Ratchet and Crank, KillZone, and God of War.

To seriously push the adoption of 3D, Sony is dropping the prices to entry. They’re offering a 3D bundle that includes a 24-inch 3D HDTV capable of dual-screen play, a 6-foot HDMI cable, the new Resistance 3 game, and a pair of active 3D glasses all for $499. Additional glasses will cost $69.99 a pair.

Sony then moved on to talk about new PlayStation Move titles that include NBA 2K12, Medieval Move: Deadman’s Quest, Infamous 2, Little Big Planet, Starhawk, Sly Cooper: Thieves in Time, Dust 514, and Bioshock. Kobe Bryant even made an appearance to demo the NBA 2K12.

And finally, Sony closed the night with the unveiling of their PSP successor codenamed NGP. It turns out the device is now officially called the PS Vita. It features a 5-inch OLED touchscreen, 6-axis motion sensor, front and rear touch panels, and front and rear cameras for augmented reality games.

Ruin, ModNation Racers, and Street Fighter X Tekken were presented as new games for the PS Vita, which has more than 80 titles in development from major publishers including EA, Capcom, and Activision. The PS Vita will come in a WiFi-only model for $249 as well as a 3G/WiFi model for $299 that is only offered through AT&T at this time. Funny note is that the audience booed at the AT&T announcement. Pricing and information for other carriers will come later.

For Nintendo’s big event it was obvious what everyone was waiting for—the next-generation Wii console. But, of course, they had to save that for last. They opened the show with a live orchestra and four new Zelda titles. They then moved on to new titles for the Nintendo 3DS, which included Starfox, SuperMario 3D, Kid Icarus: The Uprising, and Lugi’s Mansion 2.

Pokemon Black and White editions for the 3DS will now get a new and enhanced Pokedex to provide more ways to acquire new Pokemon as well as take photos with them via augmented reality. But best of all is that the new Pokedex 3D will be free and available exclusively through the Nintendo eShop.

As for the most anticipated next-generation Wii console that’s been dubbed “Project Cafe,” well it was revealed as the Nintendo Wii U. The Wii U involves a new game controller that will open up many possibilities in new forms of gameplay. The controller features a 6.2-inch touchscreen, with two analog Circle Pads and the regular Nintendo controller buttons. It even has a front-facing camera. The new console will work with classic Wii Remotes and be backwards compatible with Wii games. For the full details you can check out the official press release here. And be sure to also check out our SlashGear 101: What Can the Nintendo Wii U Do?

The Wii U console itself was still in full lockdown behind a glass case, but attendees got to play around with the Wii U controller. Make sure to check out our hands-on with the controller. The Wii U is slated for a 2012 release. 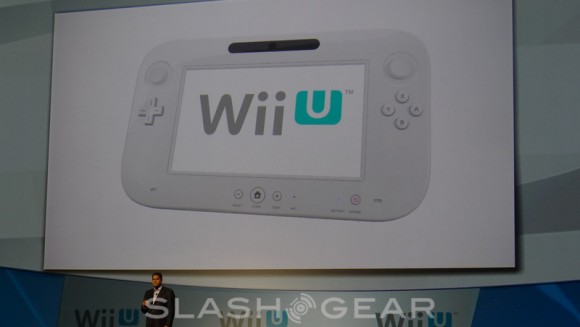