SlashGear 101: What Can the Nintendo Wii U Do?

Before we begin, have a look at the initial announcement post on the Wii U we whipped up from the words spoken at E3 2011 on stage at the Nintendo keynote. But what does it all mean, you might be asking? What will I be able to DO with this new Wii U system, and what will I be doing with the Wii gear I’ve got already? Let’s have a look! What we’ve got here is two major bits: a new controller and a new console, the controller needs to the console to work, but the console does NOT need this brand new controller to work. Confused yet? Let’s make this rather simple!

What we’ve been treated to today is a presentation by Nintendo on a brand new system called the Wii U. What they showed off first was the controller, and indeed it was difficult to see where the console fit into the picture. This is the idea, as Nintendo is certainly wanting you to play games, not stare at a big box all day long. Therefor they’ve pushed the console to the background and have enhanced the controller to the point where it’s the major greatness of this system is the fact that you’re going to want to work with the controller more than you’re going to want to work with the big-screen television.

Is this what Nintendo intends? Only time will tell. Until then, lets go down the list of features and uses for this new setup we did see: 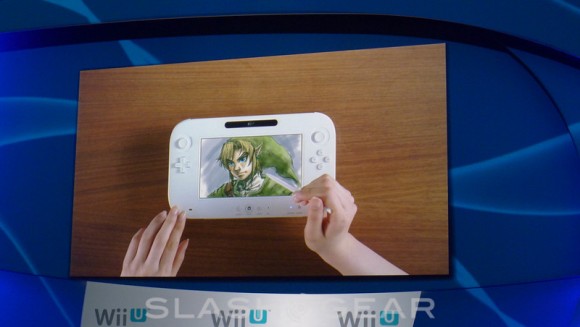 The controller has a touchscreen display which will allow, amongst the rest of the items in this list, a stylus to be used to do things like draw a picture of Link from Zelda. 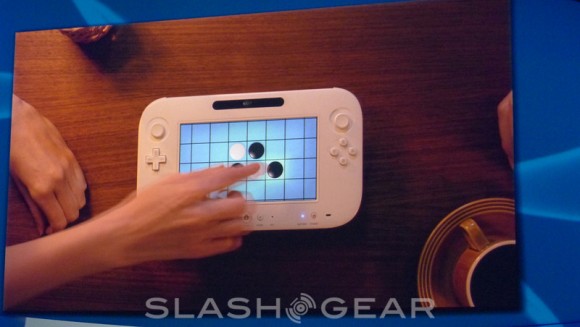 The controller will be able to work without the television at all, still needing the console to be on to play, but gameplay being able to be contained within the controller on its own. Here we see a game played between two people using the controller kind of like a tablet PC for a simple game. 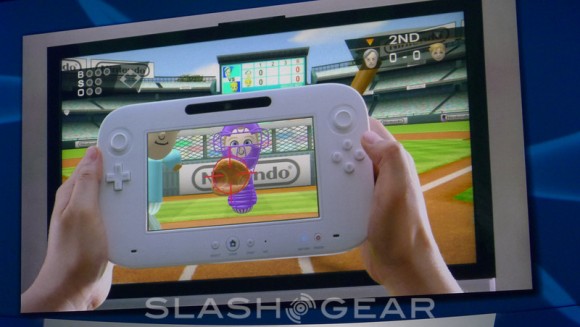 You’ll be able to play games that require you to work with both your television display and the display on your controller. In this instance a baseball game has you targeting the catcher’s mitt so you can strike out a batter. 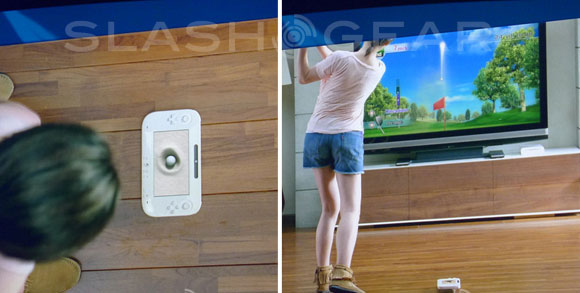 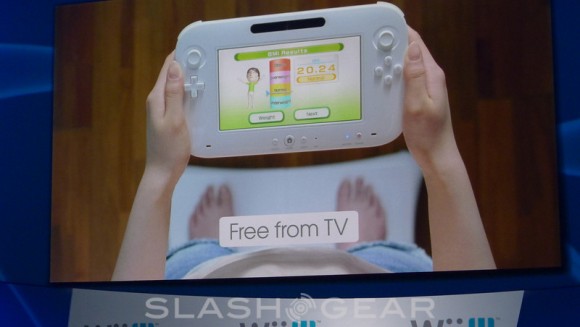 You’ll be able to use current Wii remote accessories like Wii Fit to continue to take your weight, for example, without needing to use the television at all. Very helpful if you’re not the type of person who wants to display your heaviness to the whole world. 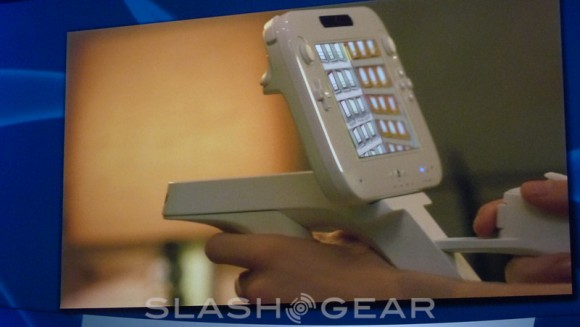 Another controller accessory that will work with this new Wii U controller is the rifle, this time acting as a scope and selection screen where the old remote simply activated a sensor. 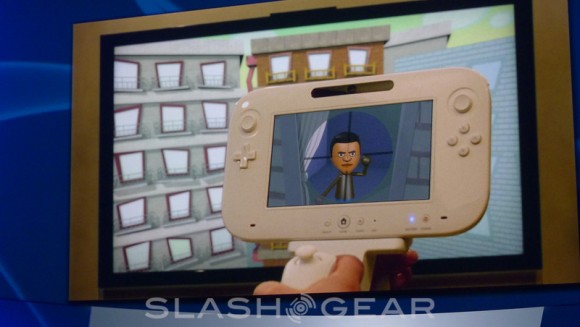 Similar to how you’ll be using the display on the controller to target a catcher’s mitt, you’ll also be interacting with your screen in different ways that include, in this game, selecting windows from a building to see what’s inside. 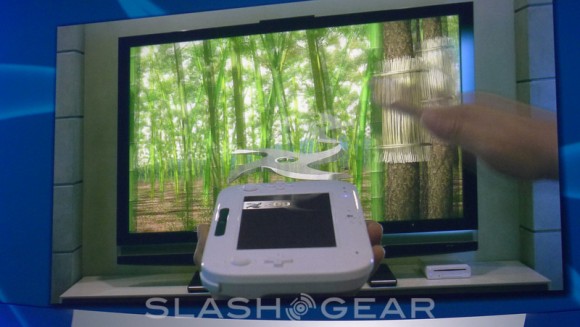 You’ll be able to use your controller as a holster, holding on to ninja stars until you swipe them out toward the screen for excellent bamboo-cutting action. 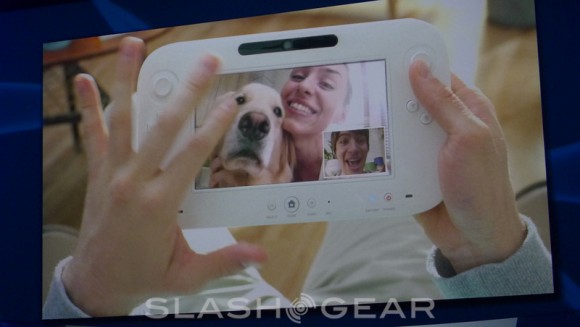 The front-facing camera on the Wii U controller will be working perfectly well for video chat, including animalia video chat if you prefer. 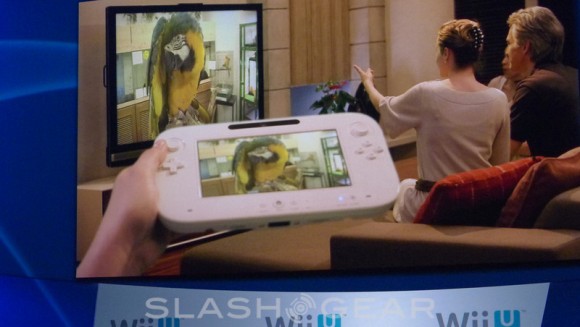 Your controller can act as a remote control, here for example acting as a controller of which photos you’d like to display on the screen. Time for some keynote speeches with Wii U, yes? 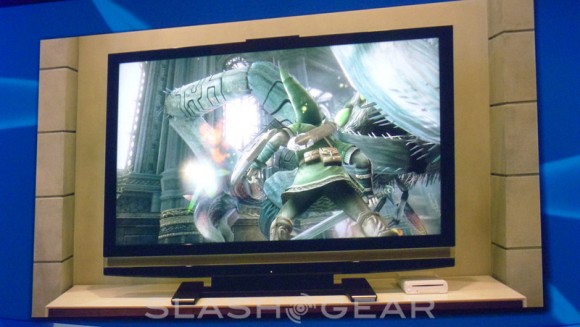 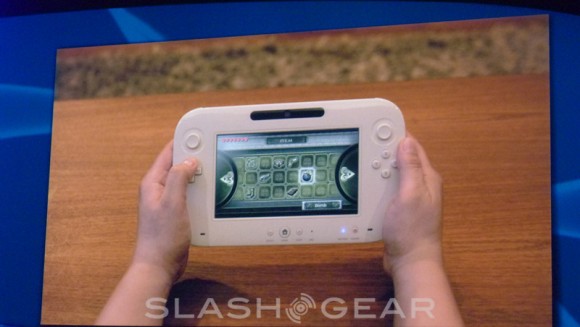 For games like future versions of Zelda (it’s the 25th anniversary, exciting!), you’ll be able to use the remote as your toolbelt. 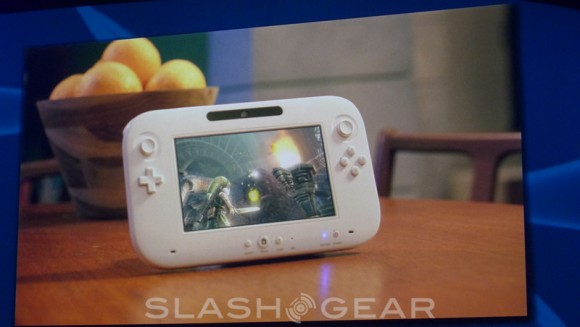 Finally, you’ll be able to prop the controller up by a bowl of fruit. Most excellent!

NOTE that we’ll be at E3 the whole convention grabbing all the sweetness from Nintendo and the rest of the gaming world in strides – check out all of our coverage by hitting the big [E3 2011] portal!