Several gaming publishers have been granted license today to release a new video preview of Diablo III, one of the most widely anticipated and longest-waited-for games in the history of MMORPGs, in its beta form. This Preview features each of the different playable character classes including the classic Barbarian followed by the Witch Doctor, Demon Hunter, Wizard, and Monk. This video mainly shows the masses of different spells and abilities available in this newest installment of Diablo, but also goes into Followers – the NPC allies you’ll be able to work with in your journey through the environments overrun with demons in your journey towards the end.

We got a glimpse earlier today at what we’d be working with in Diablo III as far as new features in the game, including real money trading, a PVP mode, and the complete absence of an offline mode. What this video shows off is how very similar this game will be to its predecessors in both gameplay and overall look while at the same time taking the viewer on a trip down awesome way with effects far beyond what we’ve seen in the past in both spells and levels of environment. Have a look at the video here and devour with great glee!

Check back in the post Bad news for Diablo III fans as Blizzard makes fundamental changes to franchise then have a look here at a bit more detail on the changes made.

We’ve got details on all of the following elements from the upcoming Diablo expansion:
Runestone System
Followers
Possible Release Date

Then there’s PVP Combat: where in the past it was just an outside sort of situation where you’d leave the town and have a battle on your own time, collecting ears if that was your thing, Player Verses Player Mode has been implemented in Diablo III, a mode which includes different types of terrain, cover, and rankings. You can choose to enter a ranked or unranked level of game type, and all participating members in the fight will be ranked based on kills and other accomplished objectives, this all leading to multiplayer achievements, titles, and other rewards.

As of today it’s also been announced that the game will require a permanent internet connection to play, similar to Ubisoft’s DRM policy. Furthermore, the Diablo II Auction House (seen below) will allow you to buy and sell items, gold, and trade skill components. At the moment you’re not able to buy and sell characters, but it has been said by Executive Producer Rob Pardo that this is a possibility in the future. 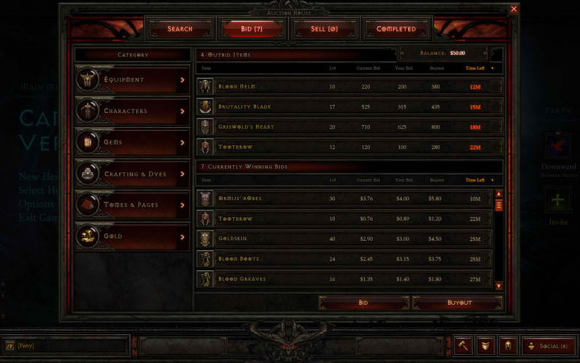 What do you think? Still excited at the prospect of this game coming out early next year?