Dell’s XPS Duo 12 has some lineage, but it’s not really the sort of ancestry you’d want to talk about too loudly. The original Inspiron Duo was a case of good in theory, poor in practice: a notebook with a rotating touchscreen that could turn it into a slate, let down by an underperforming CPU, clunky build and Windows 7’s lack of finger-friendliness. Now, with the XPS Duo 12, Dell has brought some of its ultrabook knowledge to the concept, and from what we’ve seen today it’s with good result.

Dell isn’t allowing people to properly play with the XPS Duo 12, and in fact the convertible ultrabook spent most of its time behind glass. Nonetheless, we’ve seen enough to be impressed by the industrial design. Gone is the cheap, thick bezel; gone is the fat chassis that made the original Duo so unconvincing as a slate.

They’re replaced by crisply finished metal, and the end result is a machine that looks great: convincing both as a notebook and as a tablet. What’s going on inside won’t be announced until closer to launch, so we’re keeping our fingers crossed that the performance lives up to the slickness of the exterior. 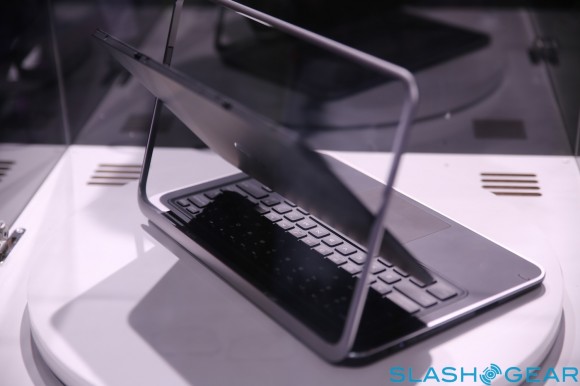 There’s inevitably a size and weight compromise when you bring a keyboard along with you, but Dell isn’t alone in expecting that Windows 8 tablet users will want traditional QWERTY input more often than not. Most other manufacturers are opting for the detachable keyboard-dock system, which makes for a lighter tablet but means you do end up with a thicker hinge. 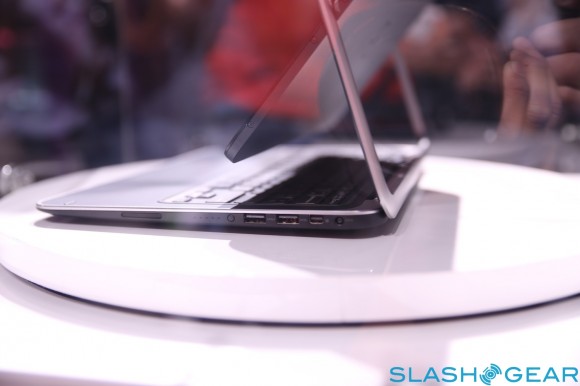 In contrast, the XPS Duo 12 is an all-in-one for on-the-go. That distinctiveness, if Dell can price and power it accordingly, may well earn it some attention in what’s likely to be a crowded Windows 8 marketplace.