Chromecast mirroring signs spotted (but it may not be perfect)

Official Android screen mirroring for Chromecast looks to be fast approaching, with signs of code supporting the display option spotted among recent Android 4.4.1 patches. The ability to stream content locally from any Android device to a Chromecast plugged into a TV or display was unofficially hacked into the dongle early on, but Google banned the AllCast app shortly after. Now, CyanogenMod’s Koushik “Koush” Dutta spots, it seems official support is close at hand, though it’s not the perfect implementation many of us were hoping for.

Google had attempted to placate frustrated Chromecast owners – who were forced to update to the latest version of the firmware automatically, losing AllCast support in the process – with the promise that streaming would be on the way. The search giant didn’t give an exact timescale for when it might arrive, however, though the 4.4.1 updates pushed out recently seem to imply it’ll now be sooner rather than later.

The new “capture_video_output” “allows an application to capture video output” according to the description. At present, only Google’s Chrome browser on the desktop supports tab mirroring – in beta at this stage – while Android apps require specifically baked-in support for Chromecast. That’s been most recently added to HBO Go. 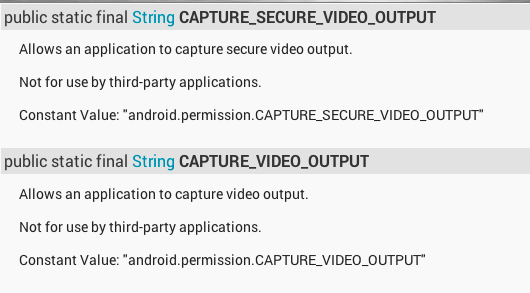 However, there’s a downside to Google’s apparent implementation, and it’s around who gets to actually access the new APIs. According to Koush, it seems the screen streaming support will only be offered to Google and the OEM themselves; that means any third-party app or vendor will be out of luck still.

It’s not the only streaming media possibility from Google we’ve heard of in recent weeks. Last Friday, chatter of a “Nexus TV” box – potentially sitting alongside not only Chromecast but Google TV – rose up again, with a focus on simplicity and easy-access to services like Netflix and Hulu.