BMW’s color-changing car is no gimmick

Color-changing cars may sound like James Bond stealth tech, but BMW has brought the real thing along to CES 2022. The BMW iX Flow featuring E Ink looks, at first glance, like the automaker’s iX all-electric SUV, but it’s covered with a skin of e-paper that at the flick of a switch can change dark to light.

The result is an e-SUV that can be white at one moment and dark gray the next. To make it, BMW took advantage of E Ink’s flexible display tech, which can not only be cut but shaped into different pieces. 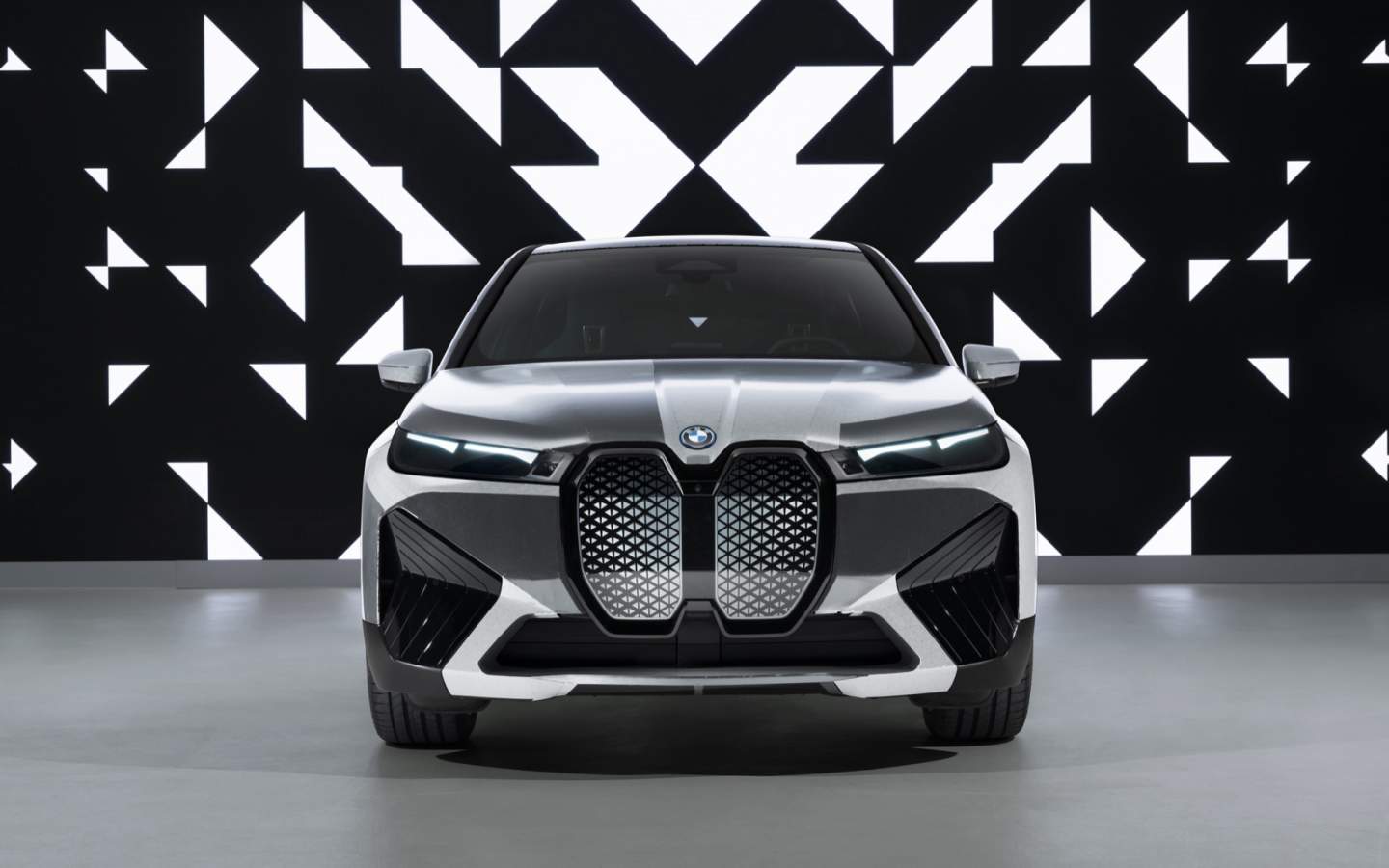 The automaker has used E Ink tech before, in previous concepts like the BMW i Vision Circular, and for the digital license plate on the Vision Amby motorcycle. For the iX Flow, though, it went much further. By breaking the panels of the car down into 2D segments, strips of e-paper could be laser cut and then combined into curving forms that wrap around the bodywork.

It took around 10-20 tries to get a clean fit, BMW says, beginning with paper templates before moving onto the E Ink paper itself. Finally, the body was sealed with a protective coating. Different sections can be controlled independently, leading to patterns of light and dark across the SUV. 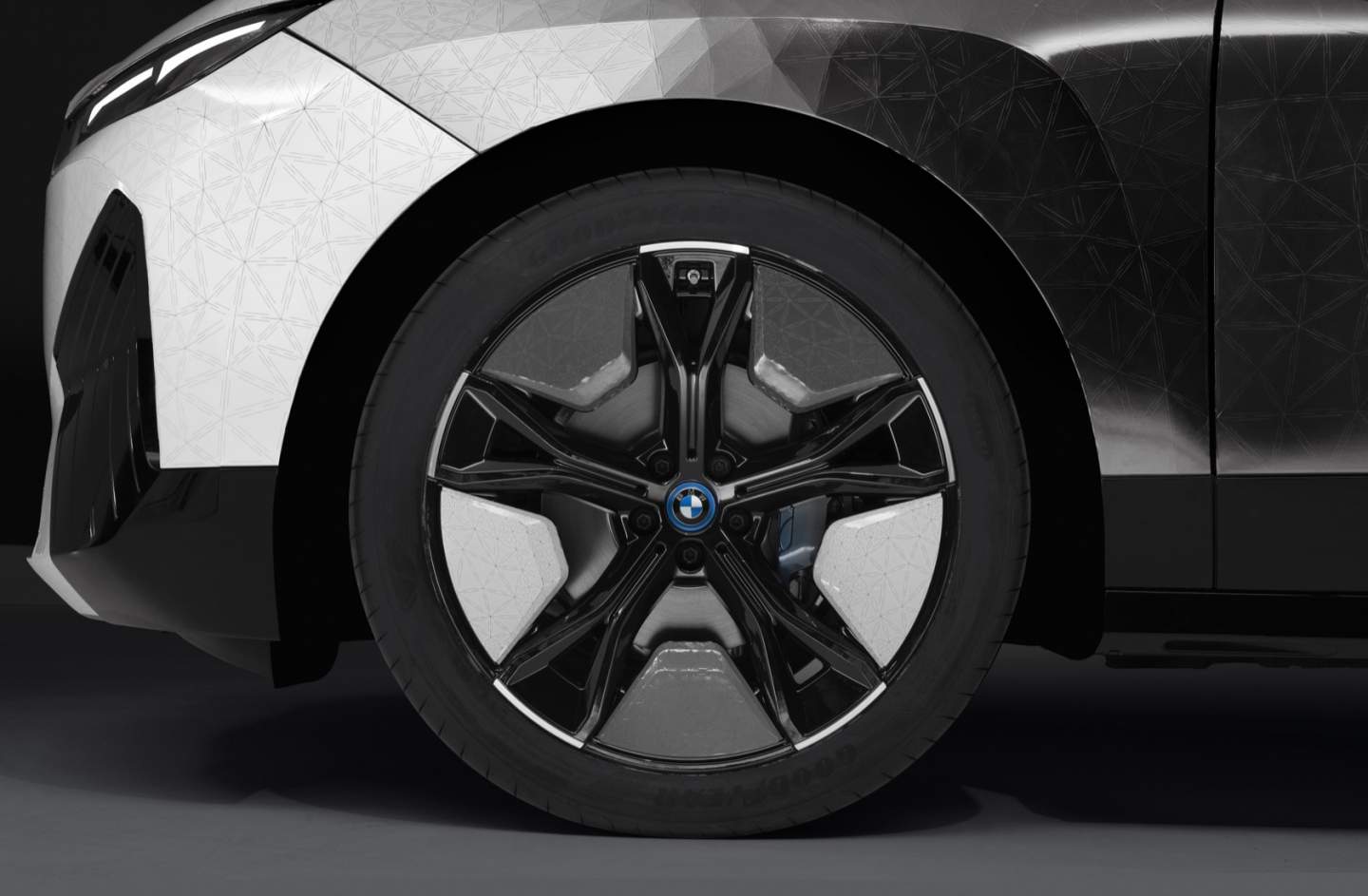 The big question, undoubtedly, is just how practical this new color-changing technology might be for production vehicles. While we’re familiar with concept cars making splashy debuts and then the tech disappearing without trace, according to BMW that’s not necessarily the fate that need befall the iX Flow.

“We see a road to series [production],” Stella Clarke, project lead for the car, says, “we definitely see a road to the future.” Helping there is the fact that, while a vehicle application may be unusual, e-paper itself has been fairly well commercialized now. 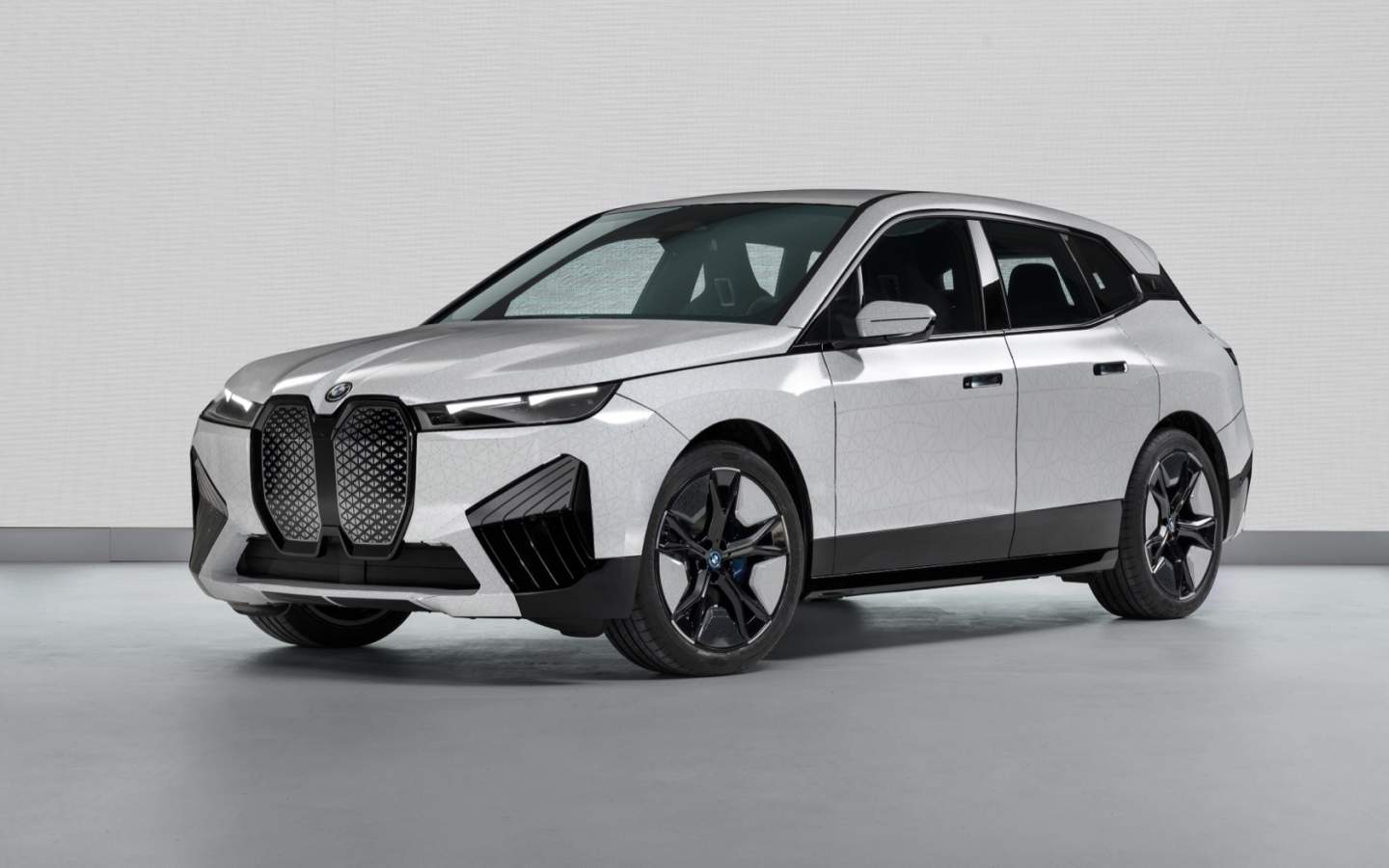 That could also help with pricing. “First indications are quite positive,” Clarke adds. “It’s the same as the Kindle materials … We don’t think it’s going to be unrealistic in terms of price.”

Assisting with that budgetary decision is the fact that this isn’t just a technology with aesthetics alone in mind. With the transition to electrification putting increased attention on power consumption, the reality is that cabin HVAC – whether cooling a hot car, or warming a cold car – can be a big contributor to dwindling range, climate depending. 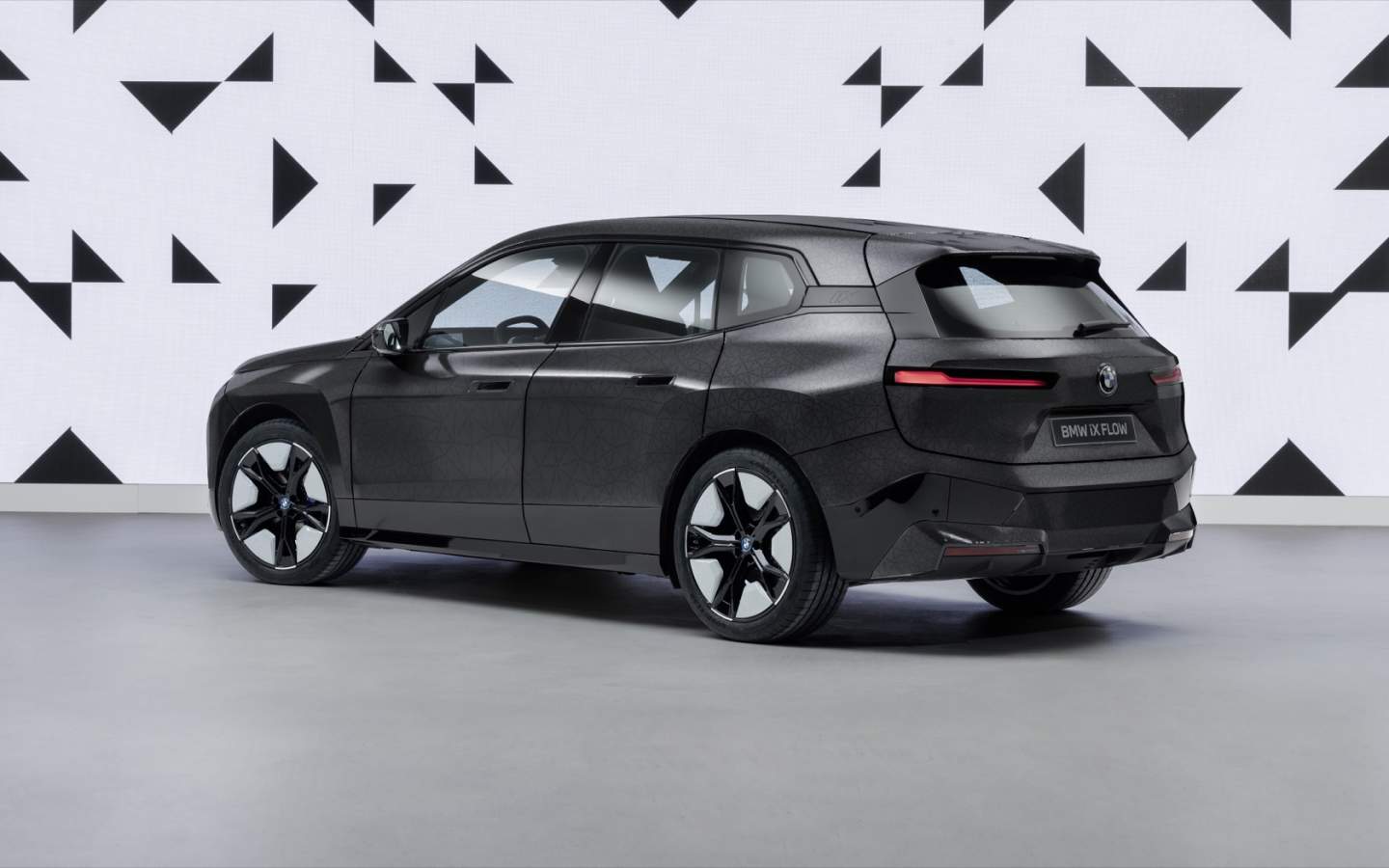 “A white surface reflects a lot more sunlight than a black one,” BMW points out. “By implication, heating of the vehicle and passenger compartment as a result of strong sunlight and high outside temperatures can be reduced by changing the exterior to a light color. In cooler weather, a dark outer skin will help the vehicle to absorb noticeably more warmth from the sun.”

In short, switching the iX Flow to white on a hot day could make it less likely to absorb heat, and thus the A/C could be switched lower, or off altogether. Conversely, flicking the iX Flow to its darker setting might make the most of any solar heat gain available in colder conditions. Since e-paper only requires electricity to change color, not to maintain it, there’s no hit on the battery beyond the shift itself. 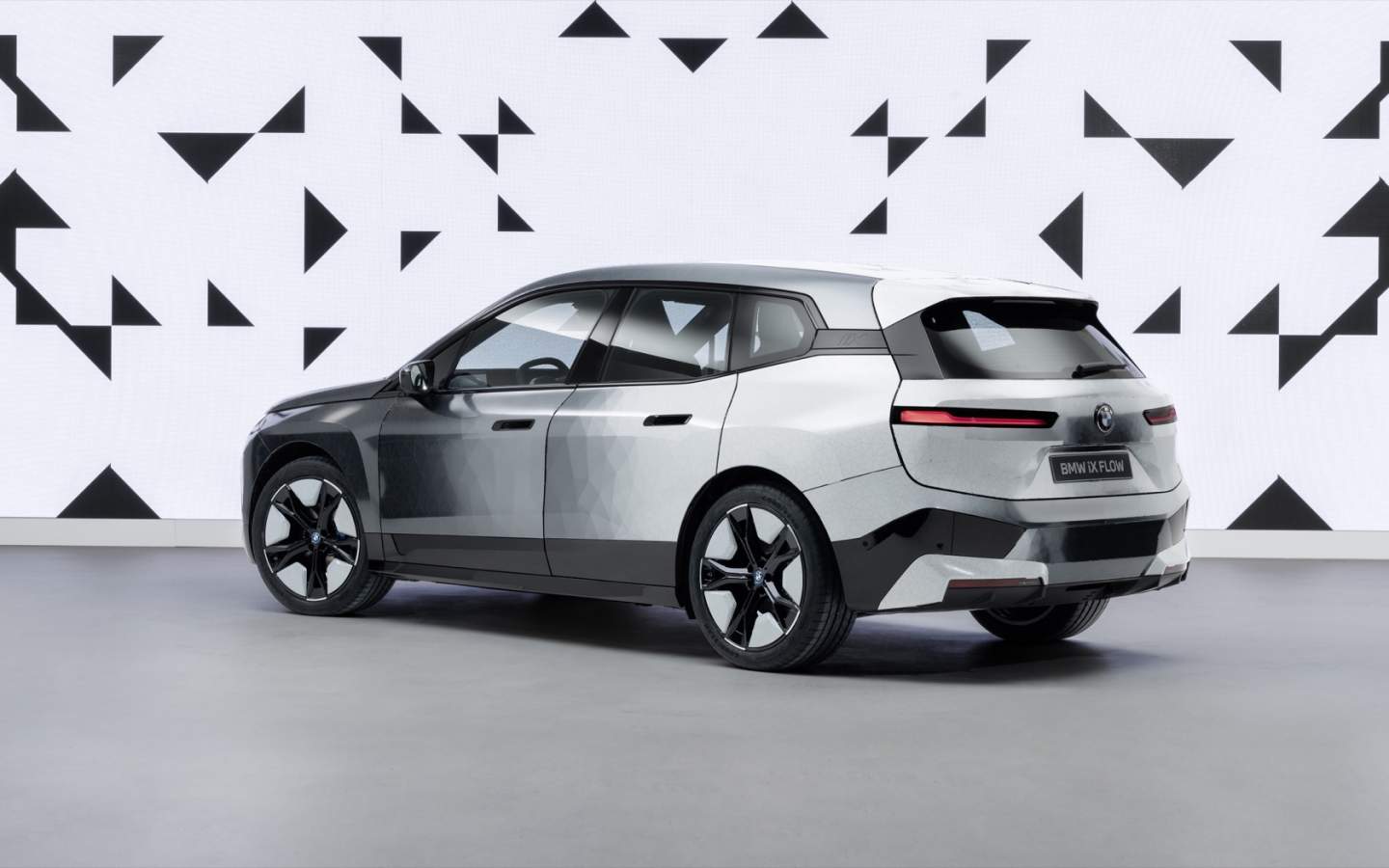 Beyond that, BMW is also exploring ways that the technology could enable more communicative vehicles. “We see some useful use-cases there,” Clarke explains, “the first being that you could show information on the surface of the car: the battery status on a car-sharing car, or we could make the car blink if you’ve lost your car.” That might be particularly useful if you thought you parked a white car but came back to find it was actually set to a darker tone.

As for color, that too is a possibility. Right now, the iX Flow can transition between black, gray, and white, but – as with color e-readers – color is technically an option. It probably won’t be the rich hues that we’re familiar with from traditional paint, Clarke warns, but if you’ve always wanted a car that can match your outfit then the good news is that BMW is at least considering it.