German automaker BMW is making up for lost time by launching two all-electric vehicles simultaneously: the 2022 iX electric SUV and i4 Gran Coupe. Both ride on BMW’s all-new Cluster Architecture or CLAR platform, a custom chassis that blends together a modern mix of steel, aluminum, and carbon fiber reinforced plastic (CFRP) to live up to the thoroughly-modern EV drivetrain. The result, BMW insists, is that blend of comfort and sportiness we’ve come to expect from vehicles sporting the Bavarian propeller badge, only now with zero emissions.

First shown as the Vision iNext Concept in 2018, the 2022 iX is BMW’s first all-electric small SUV for the US market. It had the stance of an X5, the rearward proportions of the X6, and the practical nature of an X7. With a 118.1-inch wheelbase, it certainly feels roomier than the X5 inside. It also inherited BMW’s controversial extra-large kidney grille, although I think it looks fine when combined with the slimmest LED headlights fitted to a modern BMW. 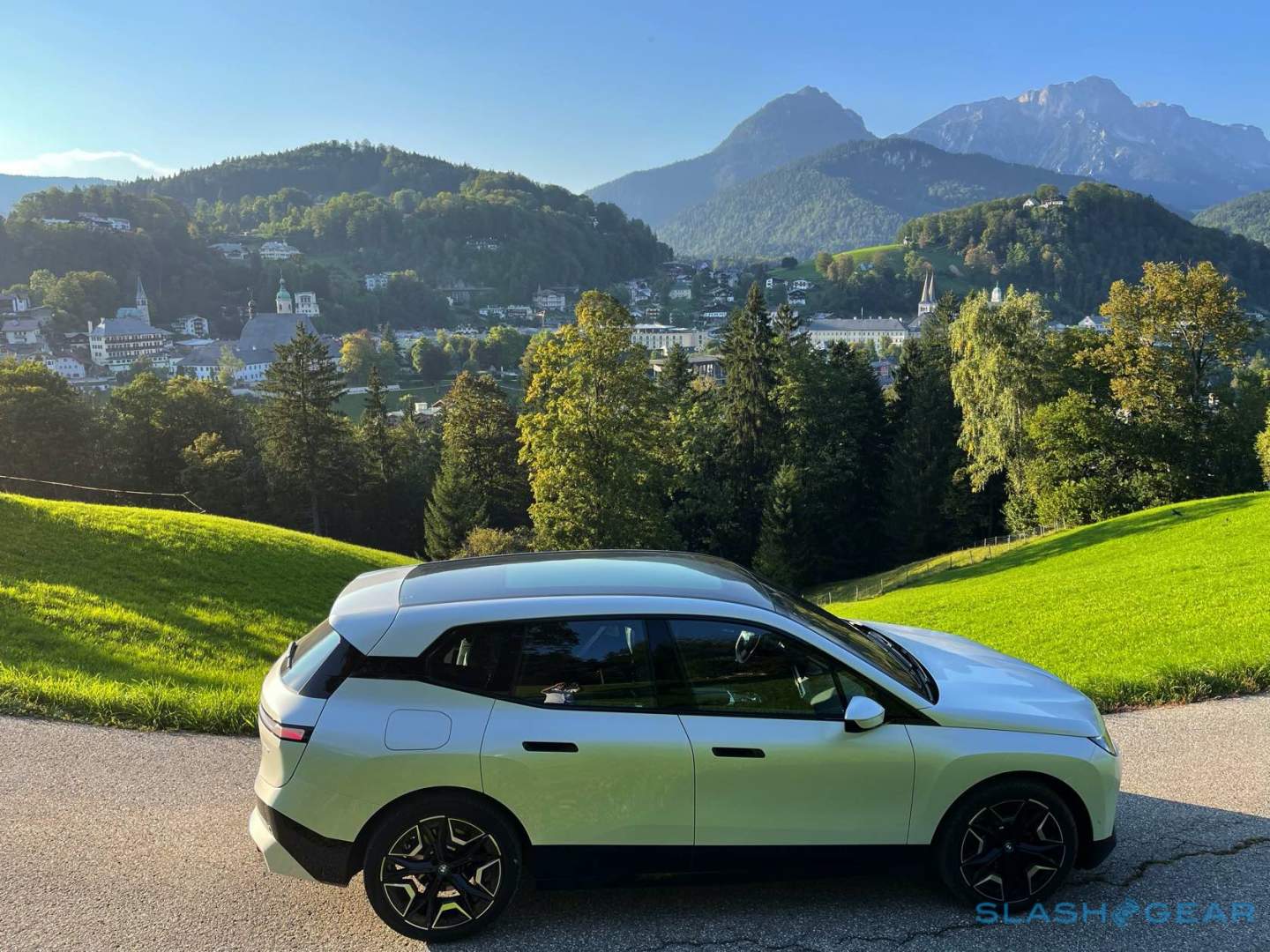 You feel the next-gen tech even before you get within arm’s reach. The iX utilizes ultra-wideband triangulation technology to learn the distance between the car and your keyfob or smartphone. That in turn means it knows from which direction you’re approaching, and how far you are from the vehicle. Come within 10 feet, and the iX runs through a choreographed lighting sequence, including the exterior lights, the illuminated door handles, and the active light carpet. 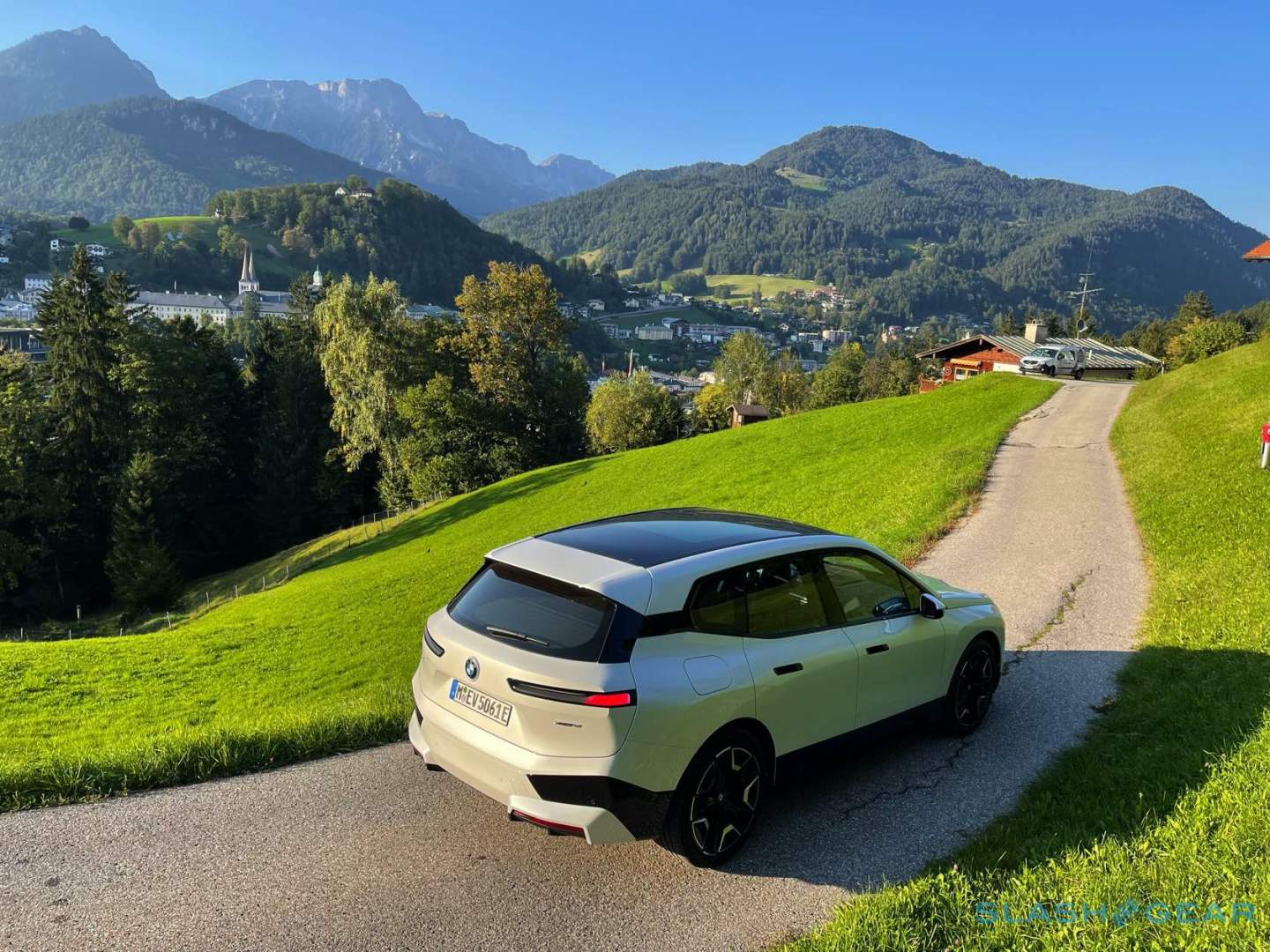 Of course it also unlocks, too, while inside the steering wheel shifts into position accordingly, a startup animation plays on the infotainment screen, and the BMW ID settings are loaded while the link with your phone is reestablished. By the time you sit down, everything should be tuned to your own, personalized settings.

The iX will initially arrive in two variants: the 2022 iX xDrive40 and the 2022 ix xDrive50. Both variants have two electric motors and an electric all-wheel-drive system. The xDrive40 may be the least powerful of the two, but it’s no slouch. Those two electric motors churn out a combined 326 horsepower and 464 pound-feet of torque, good enough to accelerate from 0 to 60 mph in 6.1 seconds. 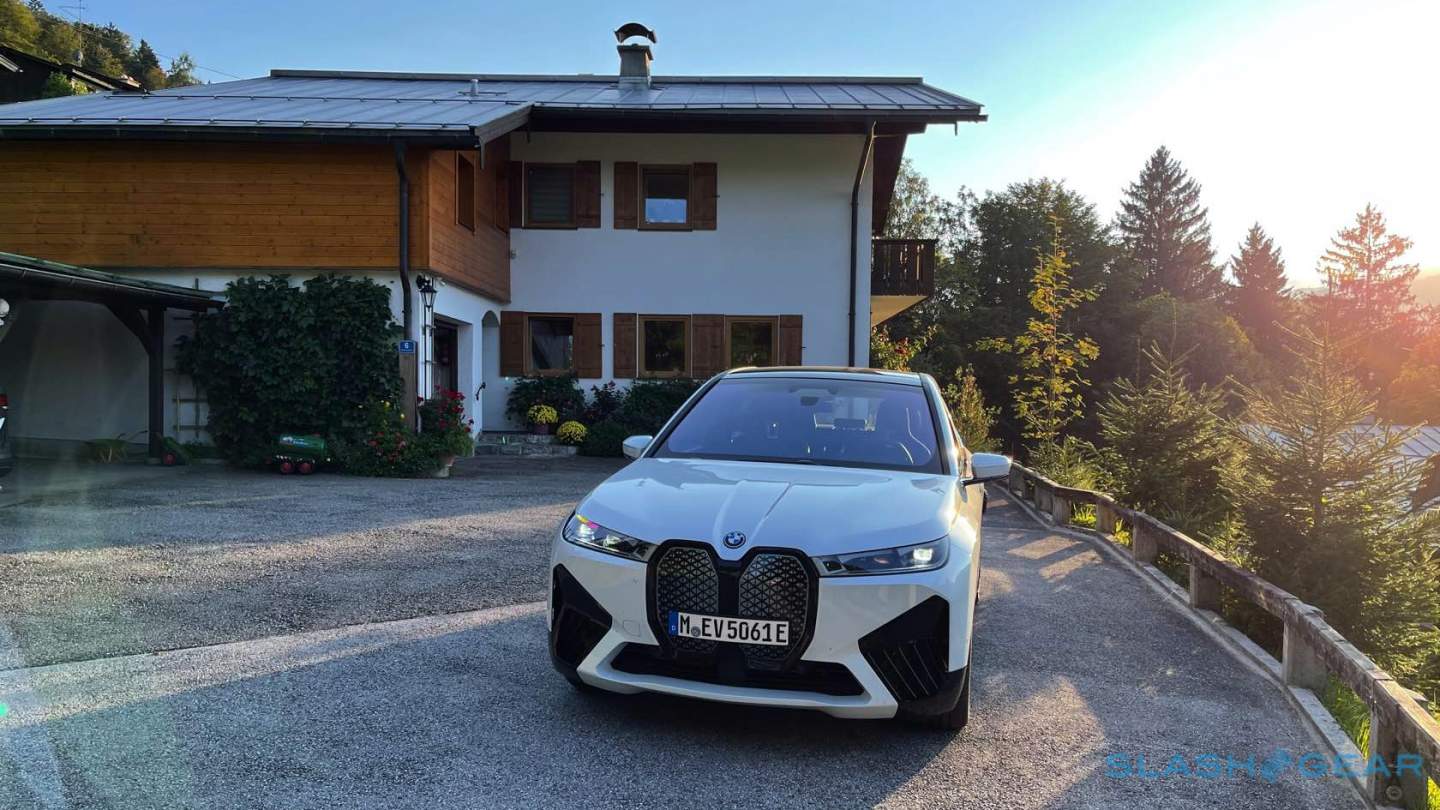 The xDrive50, meanwhile, brings 523 horsepower and 564 pound-feet of torque to the party, enough shove to rush from 0 to 60 mph in 4.6 seconds. Both have electric all-wheel-drive with near-actuator slip limitation technology that allows fully variable power transmission between the front and rear wheels. The BMW iX is rear-wheel drive in typical driving scenarios, for sportier dynamics while preserving battery power. When the system detects wheel slippage, however, it engages the front motor to improve traction. Equipped with a double-wishbone front and a five-link rear suspension with lift-related dampers, the iX xDrive 50 feels light and nimble on its toes, despite weighing close to 2.5 tons. 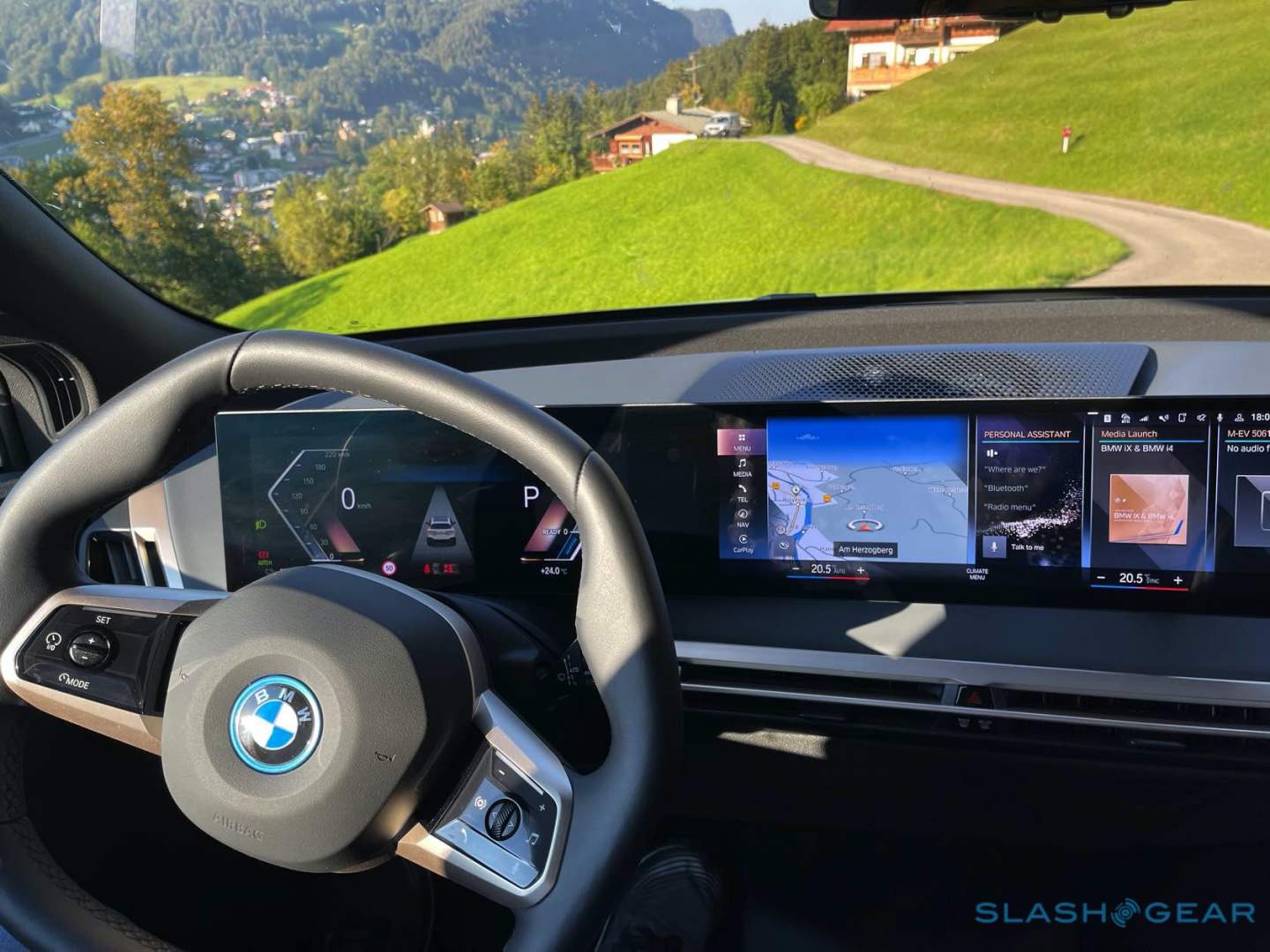 I’ve driven the X5 many times, and yet the iX xDrive50 feels sportier and slightly more eager to follow my commands. The X5 remains the pinnacle of sporty SUVs’ handling and driving dynamics, but the iX feels like a literal jolt of energy on the road. Most of it has to do with its lower center of gravity since most of the weight (i.e., the batteries) is on the floor. It’s also pretty comfy, despite having standard 20-inch light-alloy wheels, and the optional two-axle air suspension with electronic dampers offers flexible road manners. However, the steering is not quite as immediate and precise as I expected it to be. The X5 trumps the iX in this department, compounded by the iX’s odd hexagon-shaped tiller. 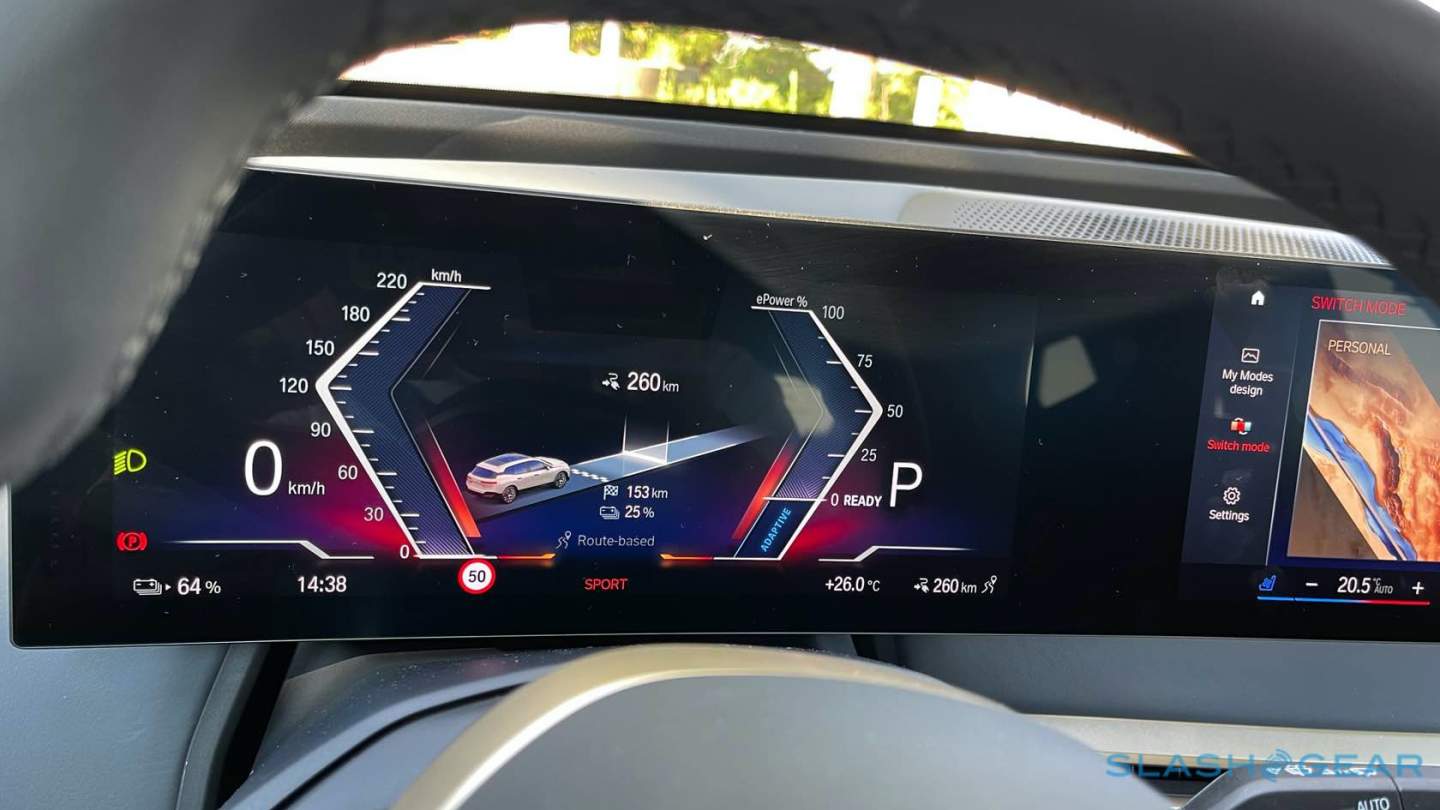 In BMW’s fifth-generation eDrive technology, the electric motor, power electronics, and transmission are a single component to reduce weight and complexity. BMW says the integrated drive system also benefits power density and efficiency. Meanwhile, the top-dog iX xDrive60 is joining the lineup next year, though BMW is coy on the exact power figures. If sources are correct, the xDrive 60 will have over 600 horsepower from its pair of excited synchronous electric motors, enough to run side-by-side with the Audi e-tron, Mercedes-Benz EQC, Rivian R1S, and even the Tesla Model X. The BMW iX handles better and feels sharper to drive than a Jaguar I-PACE or Tesla Model X, but whether it’s quick enough to trounce the Tesla is a different story altogether. 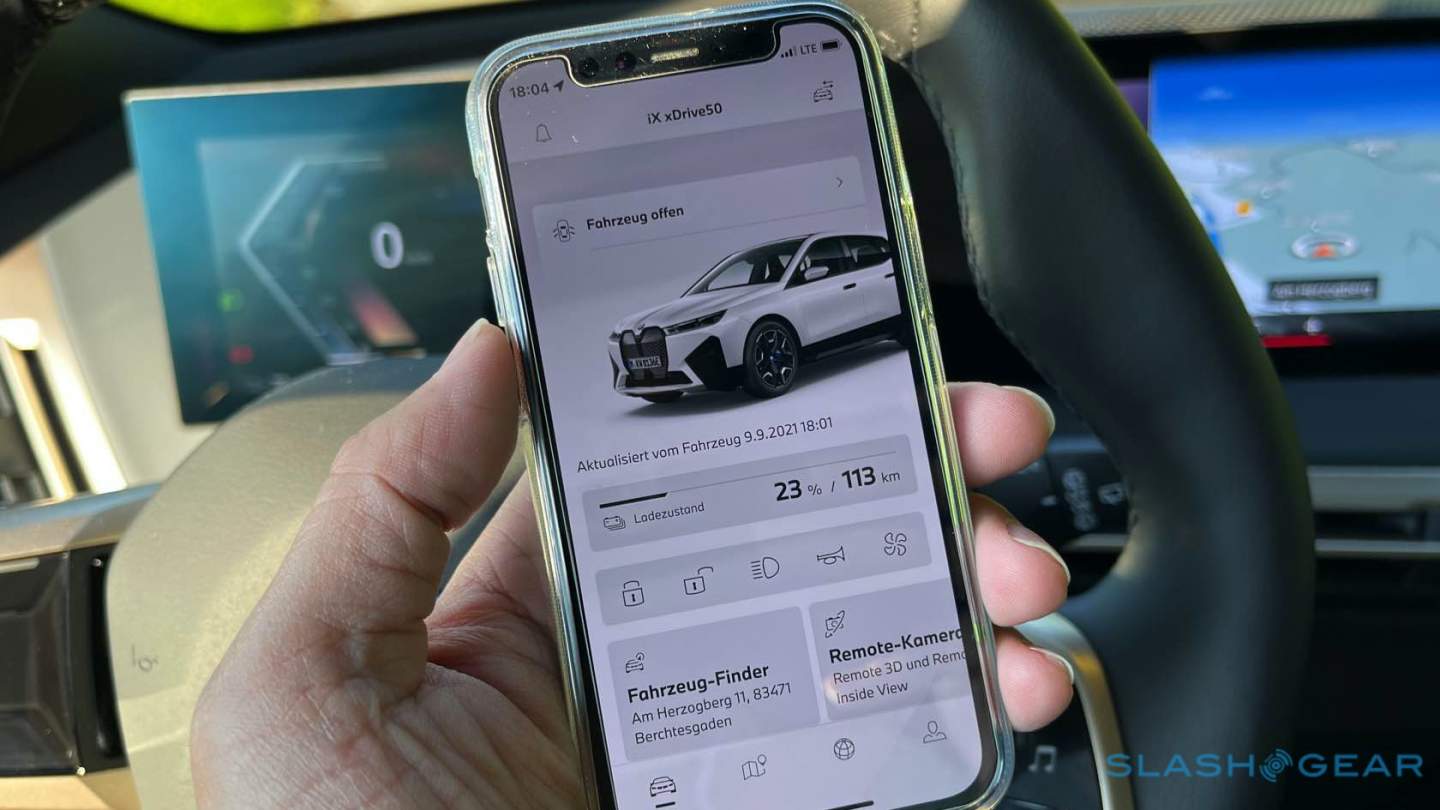 For charging on the move, BMW has partnered with EVgo; the SUV accepts up to 195 kW of DC fast charging to replenish the batteries from ten to 80-percent in under 40 minutes, or 90 miles of range in ten minutes. At home, an 11 kW Level 2 onboard charger takes the batteries from 0 to 100-percent in around 11 hours. The driver can manually select high, medium, or low regeneration for when they lift off the accelerator, but alternatively there’s adaptive energy recuperation which taps data from the sensors and navigation system to adjust the recuperation level automatically. A coasting function allows the crossover to “freewheel” on the highway without consuming any electricity at all. 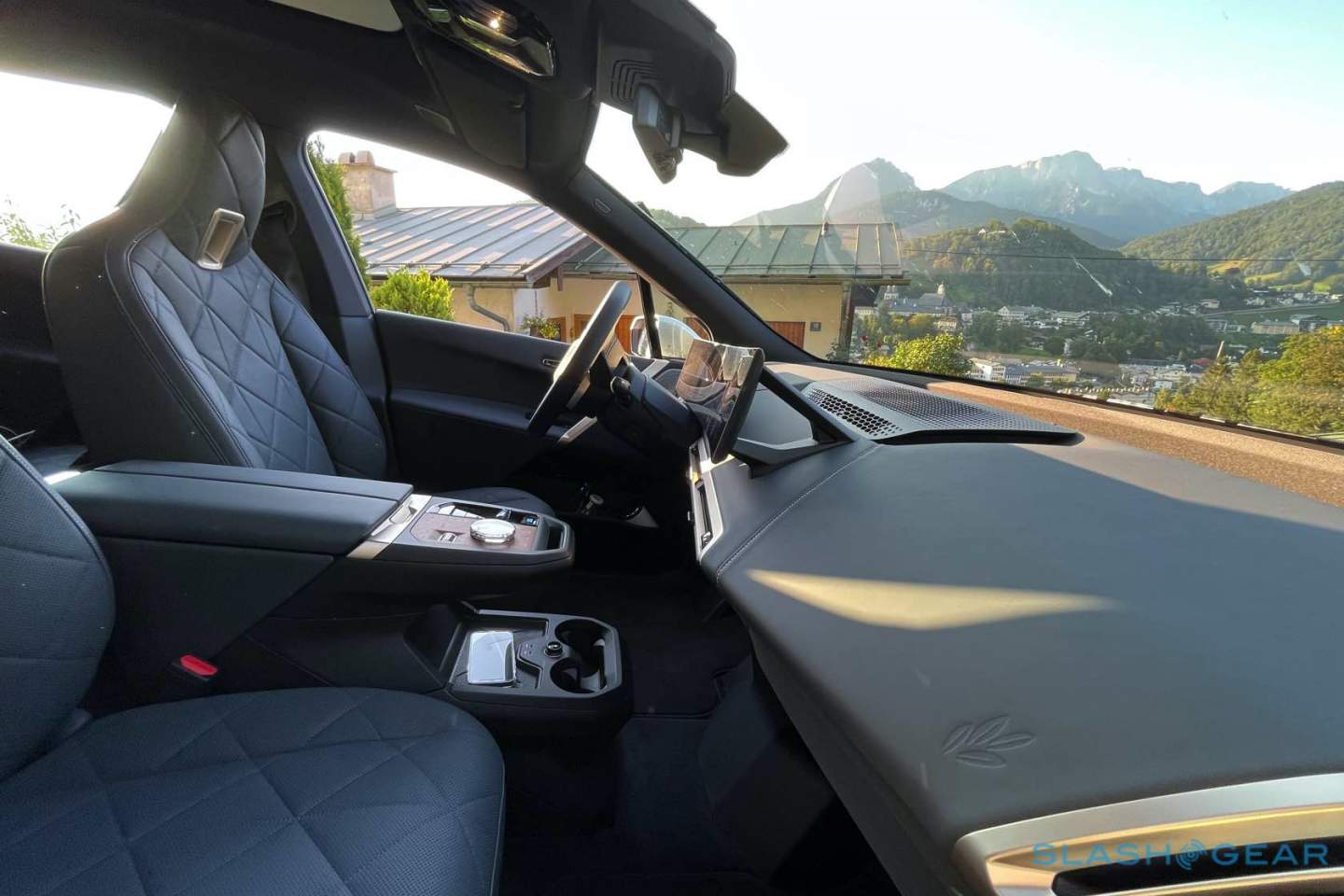 The interior is as roomy as it is luxurious. Quirky touches include the aforementioned hexagonal steering wheel, a first in a production BMW. The automaker claims the unique shape improves ease of access and seating comfort, but really it has more to do with offering a better view of the curved display behind the wheel. 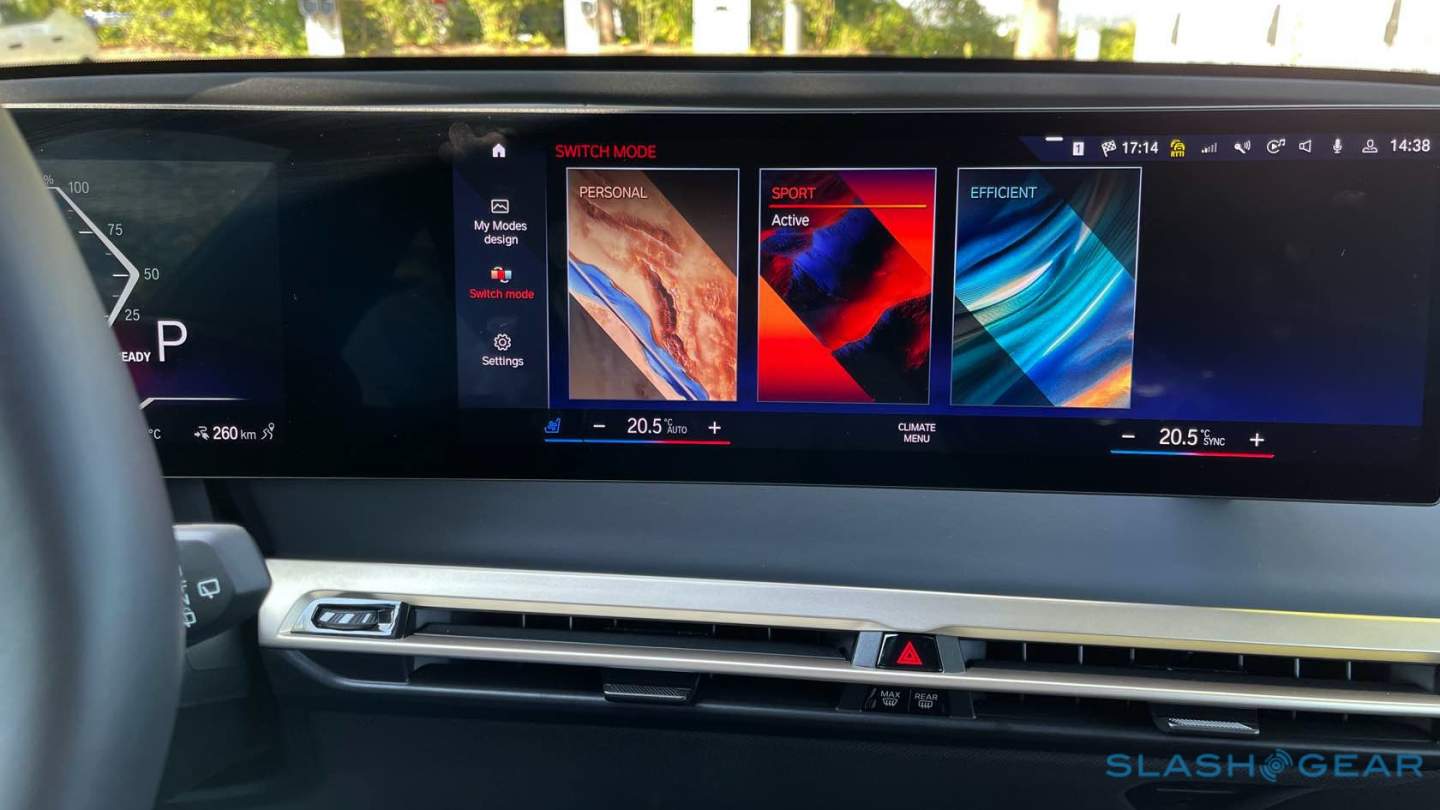 That’s the next-gen iDrive 8 infotainment system, here shown on a curved glass panel angled towards the driver. Behind the glass are a 12.3-inch digital instrument panel and a 14.9-inch central touchscreen. The center console is home to a familiar iDrive rotary controller with rocker switches and active haptic buttons. Also standard is four-zone automatic climate control with an integrated nanofiber filter to prevent allergens and microbial particles from intruding into the cabin. I’m a fan of the panoramic glass roof with electrochromic shading, eliminating the need for a roof liner. BMW says the iX xDrive50’s glass is the industry’s first example of Polymer Dispersed Liquid Crystal Technology being used to shade the interior. 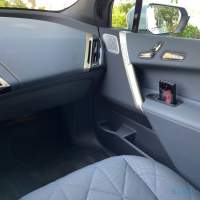 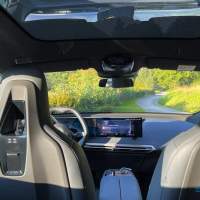 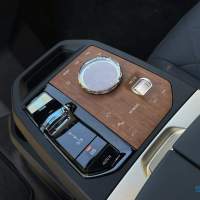 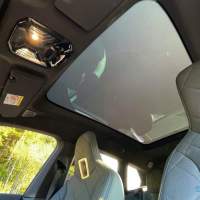 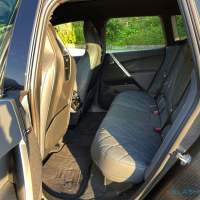 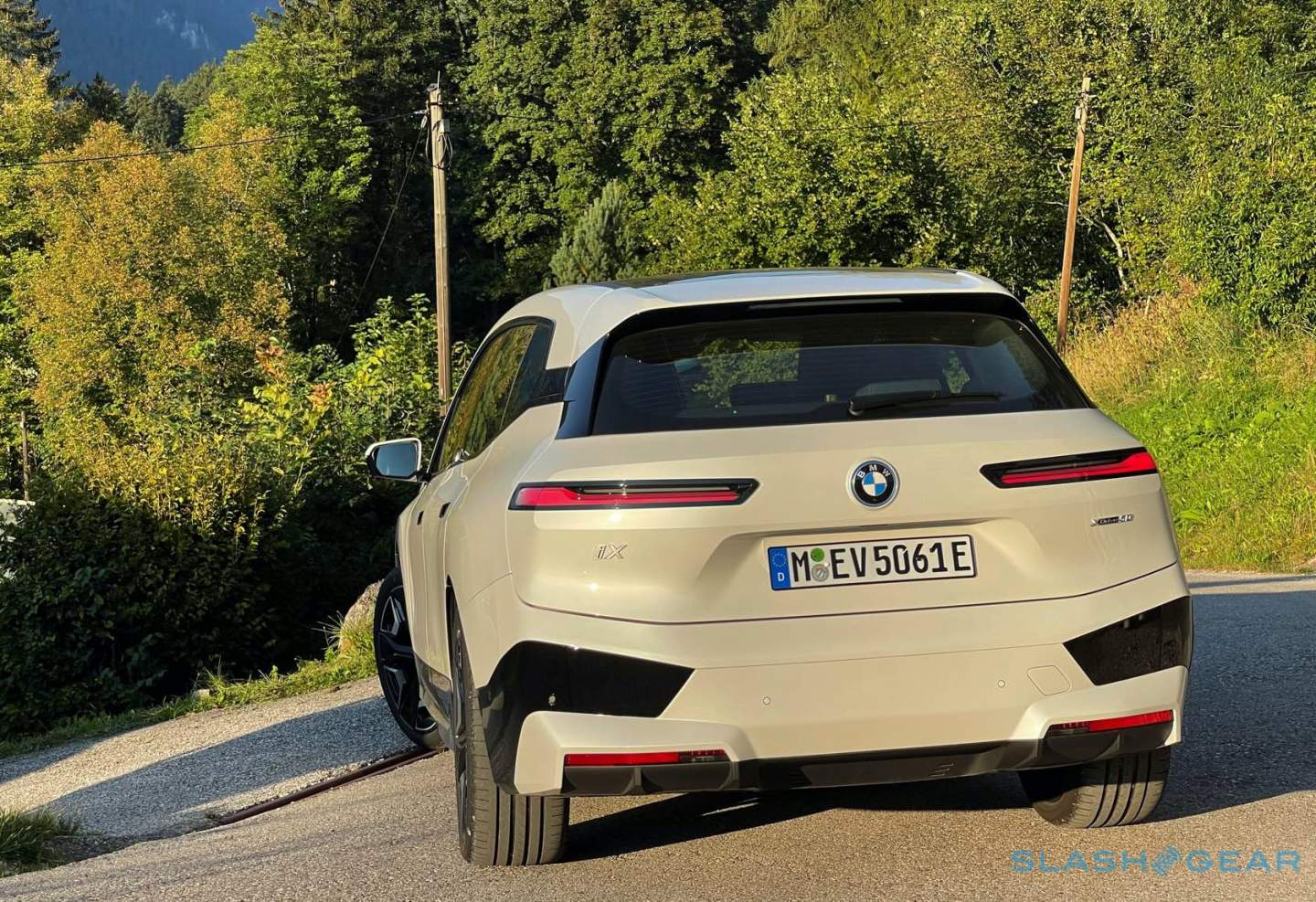 With the optional Driving Assistant Professional package, you get adaptive cruise control with stop & go and an advanced version of BMW’s lane-keeping assistant. The latter utilizes data from the front cameras, side cameras, front-facing radar sensor, and the four radar sensors on the sides of the vehicle to hold you in the middle of the lane, and is operational at speeds up to 124 mph. You also get park distance control, a rearview camera with panorama view, and a backup assistant.

BMW has hit the proverbial home run with the iX. It nailed everything from the performance, handling, materials, sustainable construction, and driving range; design is subjective, of course, and likely to be the second most controversial part. 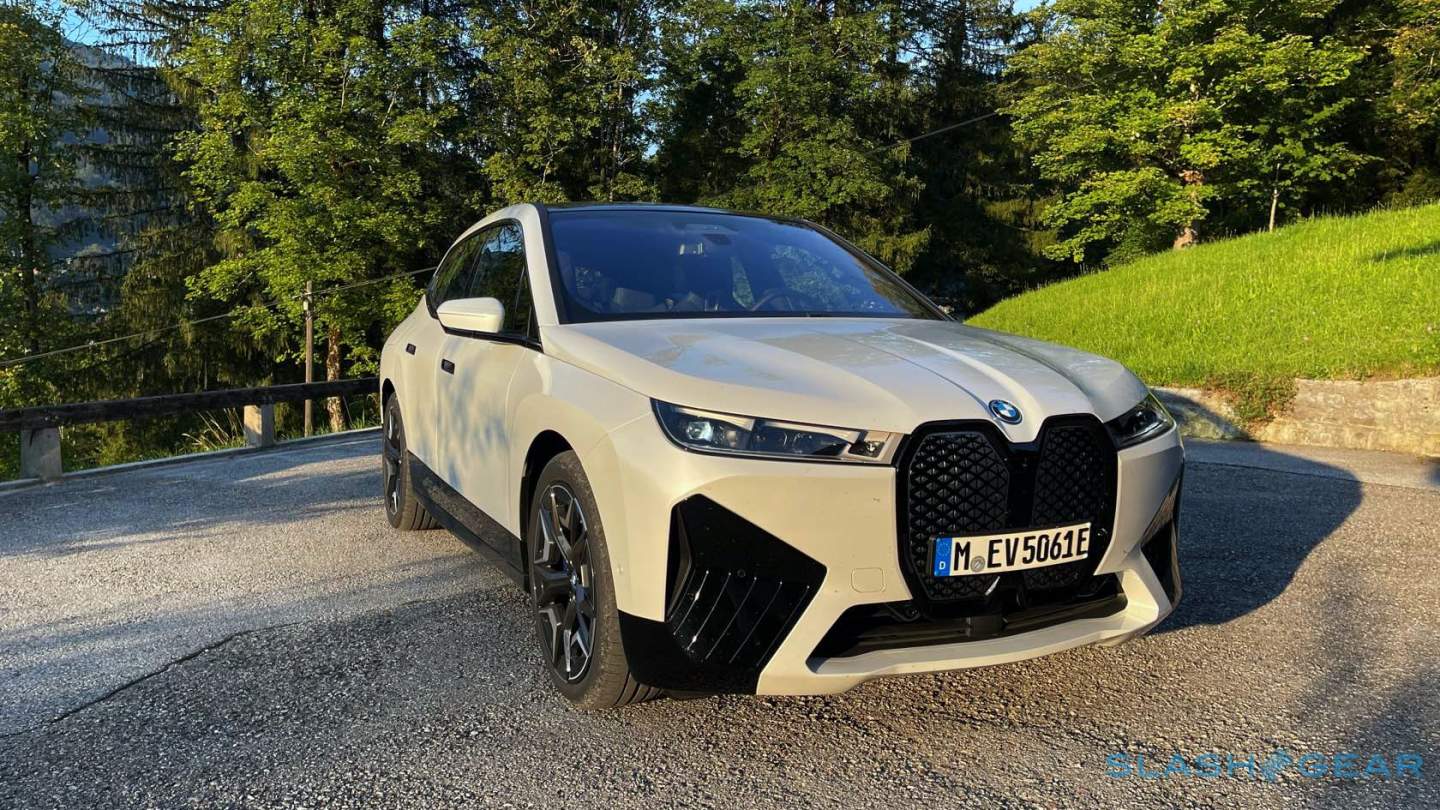 The most divisive factor is probably going to be pricing. With base prices starting at around $84,000, the 2022 BMW iX is considerably more expensive than Audi’s e-tron SUV and the Jaguar I-Pace. It also happens to cost more than a Tesla Model Y, despite having lower range numbers. From my perspective, the BMW feels more cohesive and better constructed than any Tesla I’ve tried, and it’s more involving than an Audi or Jaguar EV. That, plus the badge above the grille, could give BMW the electric winner it’s looking for.