BlackBerry needs a new smartphone for the mass market, and the BlackBerry Q5 is its attempt to deliver. Cheaper than the Q10, though offering another sturdy QWERTY keyboard for text-addicts, the Q5 pares back the specifications (and, it has to be said, the design) to boost the BlackBerry 10 line-up by 50-percent. Is it third time lucky for the plucky Canadian company, or three strikes and you’re out? Read on for the SlashGear review.

We criticized the Z10 and Q10 before it as restrained and relatively uninspired in their design; the BlackBerry Q5 elevates those qualities to new levels of blandness. Where the Q10 had, at least, its curvaceous corners and sturdy, bracing struts delineating the QWERTY rows, the Q5 gets none of that. Blunt edged, the matte plastic errs on the bland side of sturdy, and there’s a little more creak to the casing than we’d like to see, given the back panel is non-removable. The color variants – which BlackBerry didn’t have for us to review – look better than the black. 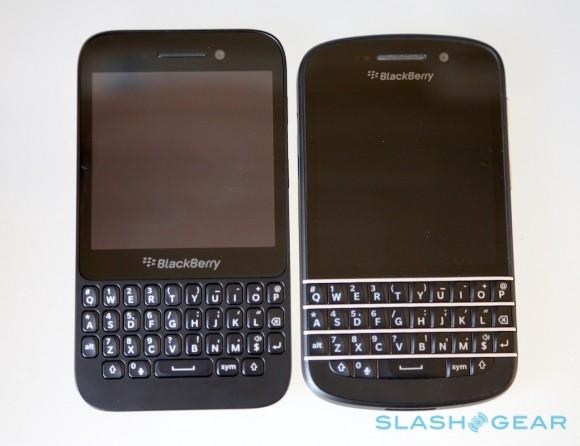 The physical keyboard is clicky and easy to type on, the tiny keys themselves more separated than those on the Q10, but no less flex-free. Above is another 3.1-inch, 720 x 720 touchscreen, though here using an LCD TFT panel rather than the Q10’s Super AMOLED. It’s a solid panel, though, with the pixel density high enough to make it pleasingly detailed to the eye. Unlike on the Q10, meanwhile, the BlackBerry logo has been shifted in-between ‘board and display, meaning there’s more room for your finger to swipe up, starting off the bottom edge of the touchscreen, and dismiss apps. That was tricky to do on the Q10 at times, given the comparatively narrow gap on that phone.

The volume and mute keys run along the right edge, while the lock/power button – a lone lozenge of chrome – is on the top, by the 3.5mm headphones jack. The microUSB port is on the left edge, above a hatching hiding both SIM and microSD slots, the latter good for adding up to 64GB to the Q5’s 8GB of onboard storage, half what you’d get on a Q10 (and only half of which is actually free, once the OS has had its way). The processor is slower, too, a 1.2GHz dual-core, though still paired with 2GB of RAM. We had no issues with the speed the Q5 moves at in most tasks. 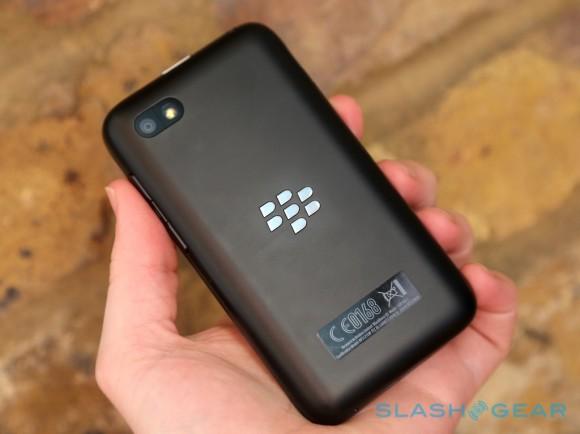 On the back, there’s a 5-megapixel autofocus camera with an f/2.4 lens and 1080p HD video recording. A 2-megapixel fixed-focus camera is above the display, good for up to 720p HD video, and by the traditional red notification LED. Inside, there’s quadband LTE and HSPA+ (up to 42Mbps), along with quadband GSM/EDGE, WiFi b/g/n (2.4GHz only), and Bluetooth 4.0. GPS and NFC are included, together with an accelerometer, digital compass, proximity sensor, gyroscope, and an ambient light sensor. No HDMI port, however, though there’s DLNA streaming if your TV is network-connected.

BlackBerry 10.1 makes its second appearance on the Q5, the slightly modified version of BlackBerry’s QNX-based platform. For the most part, it’s unchanged from the platform we reviewed comprehensively back in our original Z10 review, which we’d recommend reading first. For the QWERTY devices, however, 10.1 throws in support for universal search and some other keyboard-centric tweaks.

For instance, start typing “Text XYZ” and you’ll have the option to send a text message to a contact of that name, as well as seeing any search results for the phrase. “Tweet XYZ” throws out a new Twitter message, and you can do the same with Facebook. 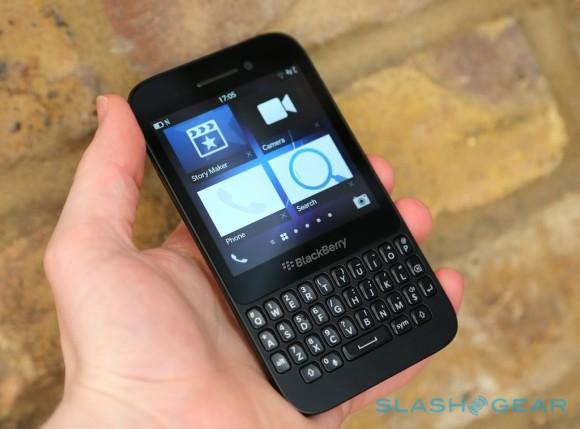 BlackBerry 10’s main conceit is the unified inbox and the way it pipes its notifications to you. Swipe all the way to the left and you’ll find an homogenized mailbox containing email, Twitter, and other messages, though it’s also possible to view them on a per-account basis. When the red light starts blinking, you can swipe up and across the display to “peek” at the notification bar, which shows how many new calls, messages, and other alerts you have; finish the swipe and you’ll rocket to the inbox itself to read them.

It works, though its charm is very much dependent on what device you were using before. BlackBerry 7 device owners will probably enjoy the greater detail as to what’s new, having been used to just the red LED before. Those coming from Android or iOS, however, will likely find the pull-down notification bars of each platform offer more in the way of information than BlackBerry 10’s system. In short, it works, but it doesn’t really work any better than anything else. 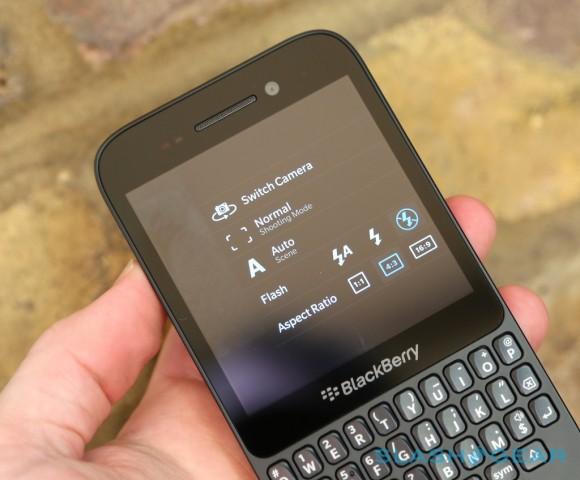 It’s a similar story in the camera app, which has the Time Shift photo system – allowing you to piece faces from multiple frames into a single shot, getting everybody’s expression right in the process – BlackBerry is so keen to talk about, but which we’ve seen on Nokia and HTC devices too. Story Maker is a neat way to package up several images with Instagram-style filters and a background track but, aside from the novelty of being able to pick your own music, HTC’s automatic Highlight reel on the One is arguably more gratifying.

BlackBerry Messenger has long been the company’s wildcard, the popular IM service which demanded a BlackBerry handset in order to participate in. BBM hasn’t been slow to see updates, however, too, including Screen Share to show your IM friends exactly what’s going on (though they can’t take control of the phone to, say, walk you through a presentation or game) and video chatting. In the coming months, though, BBM will be released for iOS and Android, and while the apps won’t have all the BlackBerry 10 features to begin with, that seems only a matter of time. 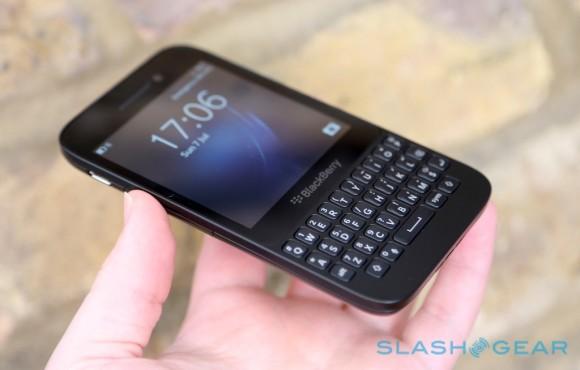 If it sounds like we’re being hard on BlackBerry 10, there’s a caveat. The OS isn’t bad, certainly – the multitasker interface, which shrinks apps down to thumbnails that can still show some key, live-updating information, is neat – but neither does it offer most users a compelling advantage over more established platforms from Google and Apple. Meanwhile, the BlackBerry World app store is still lacking the breadth of titles its rivals boast, and while the situation is improving, too many of them are juddering Android ports rather than native code. It’s a bind Microsoft finds itself in, to a similar extent, with Windows Phone, but we’d argue Windows Phone is more approachable for new smartphone users than BlackBerry 10 is.

BlackBerry had to cut some specifications somewhere on the Q5, and the camera is perhaps the most obvious place that has happened. 5-megapixels (versus the 8-megapixels of the Q10) puts it pretty much on a par with the mid-range smartphone norm, with an LED flash and 1080p video recording. 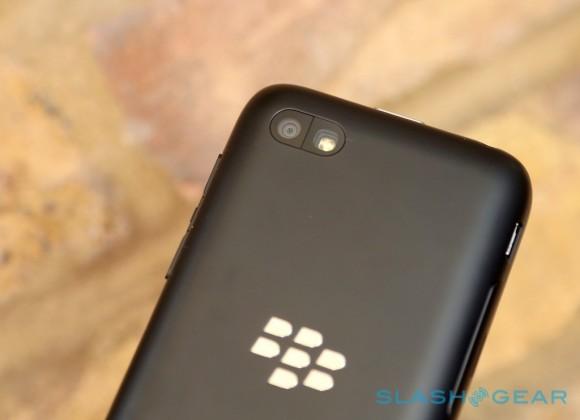 The Q5’s camera app loads quickly – unless you’re triggering it from the shortcut on the lockscreen, which demands you hold the icon down and then wait just long enough to usually miss your photo opportunity – and the touch-autofocus works swiftly too, as long as you remember to tap and hold (since just tapping takes the photo). The volume-down key also works as shutter-release, complete with a loud sound-effect that can’t be turned off.

In fact, the BlackBerry 10 camera app remains sparse in its settings: there’s the option of normal, digitally stabilized, burst, or HDR modes, whether the flash comes on or not, specific scenes for action, whiteboards, night, or “beach or snow” photography, and to flip between the front and rear cameras. However, beyond changing between 1:1, 4:3, and 16:9 aspect ratios, there’s no way to change the photo resolution.

The end result is unsurprisingly less detailed than the Q10, though solid as long as you give the Q5 sufficient light. Indoors, and in overcast conditions, the colors begin to get insipid and washed out; HDR mode can salvage things, but also has a tendency to over-brighten areas of the frame. There’s no mistaking the fuzziness and lacking detail, however, aspects we didn’t observe on the Q10.

As for video, there’s the option to use the LED flash as a camera light (though not toggle it on and off mid-filming), and the choice between 720p and 1080p recording. The same tap-and-hold focus system is present, though we found the Q5 sometimes struggled to keep a lock on faster-moving subjects.

Business users rejoice: it’s another loud BlackBerry that clings tenaciously to a signal. The Q5’s speaker isn’t the most poised we’ve heard – it’s more raucous than refined with music playback, for instance – but it cranks up loud enough for impromptu speakerphone duty and, since it’s on the bottom edge rather than the rear of the phone, is audible whether the handset is placed face up or down. 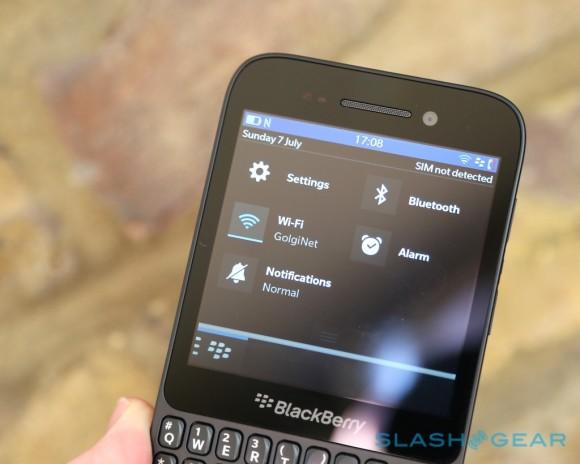 As for the 2,180 mAh battery, BlackBerry quotes up to 12.5hrs of 3G talk time or up to two weeks of 3G standby from a full charge. In practice, on a 3G network, we got through a full work day on a single charge, based on average mixed use – emails, messaging, some camera and GPS use, and some media playback. Video and media streaming took their toll, however, and despite the relatively small screen to power, the Q5 was demanding a recharge by early evening when we asked it to entertain us for longer periods.

There’s an over-aching sense, about the Q5, that it’s not for us; the common smartphone user at large. Instead, it’s more like BlackBerry’s play for the mainstream enterprise: the market that has sustained the Canadian company for so long. BlackBerry 10 is making slow inroads there – the company claims a large chunk of the Fortune 500 is at least trialling the OS, with a few firms signing up to a few thousand Z10 and Q10 sales – but what’s needed is a relatively affordable model, something big businesses can roll out to the legions of middle-management. 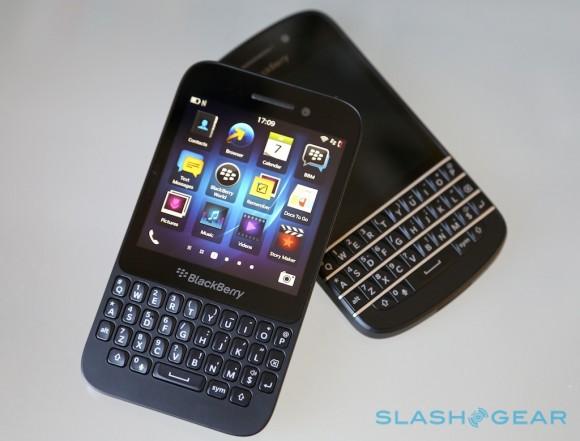 On that level, the Q5 does make some sense. BlackBerry’s attitude to pricing is likely to be mighty flexible – worn down by a challenger’s position in the segment – if you’re looking to outfit a couple of thousand people with the touch-and-type handset. For everyone else, though it’s a less compelling proposition.

What gives us most pause about the Q5 is its price. It may have half the name of the Q10, but it doesn’t have half the RRP: in fact, SIM-free in the UK where sales have already begun, the Q5 is £320 ($477) including tax, versus £480 ($715) for the Q10. Sign up to a contract, and you’ll spend just £8 ($12) per month more for the Q10 than the Q5. We’d argue not only that the Q10 is still too expensive for what you get – though we’d prefer it over the Q5 – but that the Q5 isn’t as cheap as it really needs to be. If you’re determined to get a BlackBerry and must have a keyboard, then the Q10 should be your choice; everybody else will likely find more rewarding devices running Android or iOS.