Big surprise: Facebook will eventually push ads with “Nearby Friends”

Facebook plans to eventually use its new “Nearby Friends” feature to power new location-based adverts and marketing, the social network has conceded, potentially souring what was generally seen as a privacy-mindful launch of the functionality. Nearby Friends began rolling out last week as a new addition to Facebook’s mobile apps, optionally showing those on your friendslist your location, and making it easier to organize impromptu meet-ups. However, Facebook has more in mind than promoting socializing.

In fact, a spokesperson for the social network admitted, there are longer-term plans to use the location system to tailor promotions. Though “at this time it’s not being used for advertising or marketing,” the spokesperson told TechCrunch, “in the future it will be.” 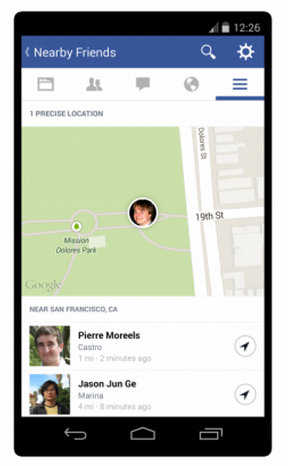 Exactly how that will happen is unclear, with Facebook declining to detail its marketing plans. Nonetheless, it’s not hard to envisage so-called “hyper-local” adverts being served up depending on what businesses or services you’re physically close to.

Google, for instance, trialled hyper-local cards for Google Glass last year, and then promptly added localized adverts to Google Maps on Android and iOS. Meanwhile, Apple is using iBeacon to shape its own take on location-based promotions.

Ironically, the reception to how Facebook had handled the Nearby Friends feature had been generally good.

Facebook had been clear that the feature would be deactivated by default, and that even when enabled would require users to actively approve which of their friends or groups could see their location.

That permission could be set to expire after a set period, and both friends would need to have matching privacy settings if they are to show up on the map.

The fact that, although there is a “Clear Location History” button, it’s relatively buried in the Activity Log in the “Location History” entry that’s at the bottom of the activity types list (and thus hidden by default, unless you click to see “More”) does somewhat undermine that cautious launch.