Ben Mattes Senior Producer from WB Games spoke up on the inner bits of Batman: Arkham Origins this week at NVIDIA’s Montreal gaming event. Running down the details of the plotline first, Batman Arkham Origins was described as an exercise in Batman history, taking place in the second year of Batman’s career – decidedly NOT the first year, as these events are covered in the comic book series “Year One.” Here Batman does not know Commissioner Gordon or any other cops or investigators, he’s still relatively new to the game, and throughout the span of the game he’ll change from a basic masked vigilante to the real Dark Knight.

Here in the series you’ll find Batman really, truly alone. He’s got to break in to the police department to get information – he’s got to hack into computers to turn up information that, in future episodes, we’d find information much more readily available. You’ll also be able to head to the Batcave.

In the Batcave you’ll be able to do combat training in a move to help the user understand the depth with which the combat system is implemented. Training in the cave allows the player to gain experience points, which in turn can be traded in for new abilities. You can also speak with Alfred in a rather extended series of chats that show the early pre-perfect relationship between the two of them. 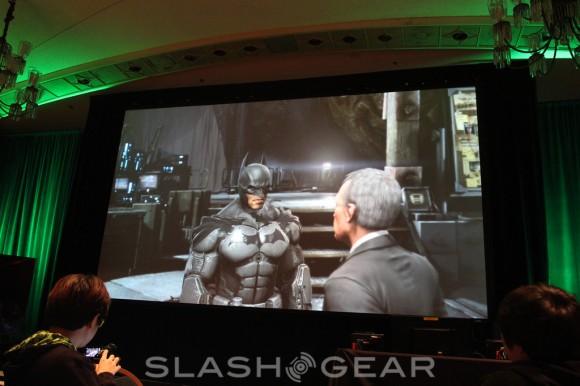 Outside the Batcave, Gotham City is ready to be explored in full. This map is twice the size of the open-world map of Arkham City. Here you’ll find NVIDIA’s optimization taking full effect. One example of how realistic NVIDIA’s optimizations made this game, Mattes showed off the dynamic snow system in a simple demonstration – walking around Gotham City on Christmas Eve.

Here you’ll find Batman’s footsteps sticking – snow moves, and different locations have different amounts of snow. Snow falls from the sky and is moved when Batman flies through it. And this is only the beginning. 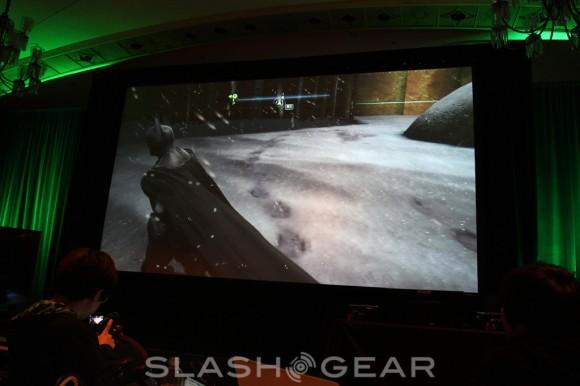 This game also works with PhysX particles for smoke, environmental cloth and tearing cloth for Batman’s cape, contact-hardening shadows, HBAO+, and lots of depth of field effects for Batman’s sensors and the like. There’s action in turbulence for more than just getting smacked through the air, too – there’s bigtime turbulence at times for the blizzard conditions that come down upon you throughout the night – the long, Santa-less night of darkness.

Have a peek at our NVIDIA tag portal for more details on Batman: Arkham Origins, WB Games, and gaming optimizations of all kinds through the rest of the week!