Audi will put its self-driving cars to work in cities across the world, detailing how connected cars and the Internet of Things will shape the its vision of tomorrow’s transportation. Dubbed the “Audi Urban Future”, the project will see teams from Berlin, Boston, Mexico City, and Seoul compete over the next six months in ways that autonomous vehicles, car-to-car, and car-to-city communications will benefit the environment, making commuting easier, and even improve community relations.

Each of the four projects take a slightly different approach to next-gen urban mobility, competing for a €100,000 ($139k) prize.

The Boston proposal, for instance, will look at how vehicles with “piloted parking” features – meaning they can navigate themselves through a parking lot into a spare space, and then back out again – will reduce the size that lots and garages themselves need to be. Similarly, the Berlin trial will examine how technology like Audi’s self-driving car could provide individual and communal transport around next-gen urban hubs.

In Seoul, the idea is to explore how cars that can communicate with each other and the city around them might improve social interactions and entertainment. Intended for the fashion-obsessed Gangnam district, the project will investigate how smart displays and Audi connect – as found in the 2015 Audi TT’s advanced Virtual Cockpit – will link to the digital city. 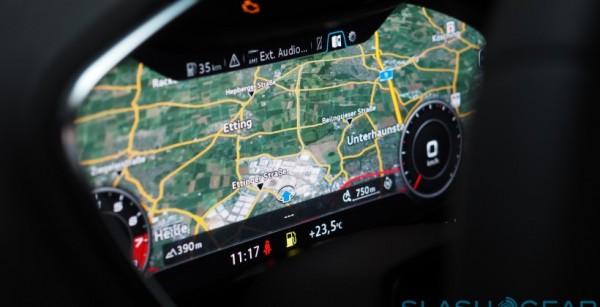 Audi isn’t the only car company looking at the value of interconnectivity between vehicles. Back in January, BMW showed off a concept car that could preemptively locate available parking at your destination, while Volvo began working on cloud-connectivity back in 2012 with Ericsson.

Meanwhile, in the US the NHTSA is exploring the possibility of mandatory “V2V” car-to-car communications, including a dynamically-evolving mesh network that would inform nearby vehicles of location, direction, and speed, and allow them to react independently to possible dangers.