Audi R8 e-tron gets another chance in new 2015 prototype

When Audi pulled the plug on the Audi R8 e-tron in 2012, it was because neither the market nor the technology seemed to be ready yet for an all electric vehicle. Partly in thanks to Tesla’s stubbornness, however, the landscape has changed significantly. Now electric cars are part and parcel of Audi’s plans for the next three years, as outlined by its own Technical Development management board member Prof. Dr. Ulrich Hackenberg. And it will be starting off, quite appropriately, with a new Audi R8 e-tron that in some ways stays the same as the original but significantly improves it as well.

The first Audi R8 e-tron was stopped short of getting on the production line because of concerns about its dismal range and power usage. Fast forward two to three years, however, technology has finally caught up with the need for speed, or distance rather in this case. The first one’s range reached 155 miles. Audi wants almost double that at 248-290 miles. And they might actually make it. A first run of the all-electric sports car used up only three quarters of the battery’s capacity for a 143-mile road trip. The readout revealed it could go yet another 70.2 miles, bringing it closer to Audi’s goals.

Battery technology has also improved considerably, allowing Audi to utilize a patented welding process for 52 battery modules. The new R8 e-tron ends up with a 91 kWh unit battery instead of the 48.6 kWh one from the first generation. output is also slightly higher at 3.6 amperes versus 3.4 amperes before, delivering much needed power. How much power? The motors can deliver 456 bhp or 340 kW. In comparison, the first R8 e-tron’s motors could only boast 313 bhp or 230 kW. Torque now also measures 679 lb-ft. As for acceleration? It takes only 3.9 seconds to go from zero to 62 mph. That said, the prototype’s top speed only measured 124 mph, though there is the presumption that it will be much higher in a production model. 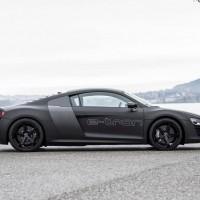 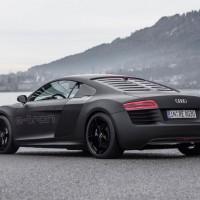 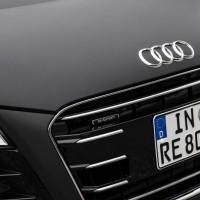 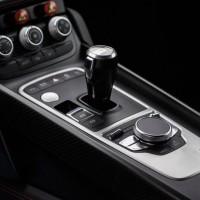 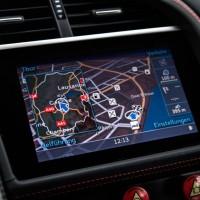 Being an all-electric vehicle, it would be hard not to compare it with the Tesla Model S. Indeed, it would seem that the new two-seater R8 e-tron would be shamed by the four-wheel-drive Model S P85D’s 690 bhp and 516 lb-ft. figures, but Audi has an advantage. The Model S weighs a good 2,100 kg. The Audi R8 e-tron? Only 1,840 kg. according to the car maker. Audi put the R8 e-tron through a diet, like using carbonfibre in the aluminum body of the car. But perhaps the most notable would be the change from electrically operated seats to manually operated ones.

It’s still too early to tell if the 2015 Audi R8 e-tron will not suffer the same fate as its predecessor, but it is certainly shaping up to be a more competitive model. It will also be more interesting, given some of Audi’s new hi-tech equipment, like that 6.8-inch AMOLED monitor that replaces the rear view mirror. That said, that feature is still up in the air. And for those who will miss the hum of a real petrol engine, there is a big red button in center console that activates a sound generator to mimic that sound, though Hackenberg was reportedly not a fan.