The Audi e-tron is great news for Tesla drivers

Tesla may have had the early bird advantage in electric cars, but while increasing competition from vehicles like the new 2019 Audi e-tron may give Elon Musk’s business plan a headache, for drivers it’s all good news. The new electric SUV won’t just headline Audi’s new electric car strategy when it arrives in dealerships next year: it’ll also mark a turning point in a new EV infrastructure that’s great news for Tesla drivers too.

Tesla did its prep work when it launched its electric car business, not only developing the cars but the Supercharger network to recharge them. Even today, it’s a feat unmatched by any individual automaker. While we’ve seen a growing number of pure-electric and plug-in hybrid models on the roads, they’ve all relied on third-party infrastructure from companies like ChargePoint and EVgo.

The 2019 Audi e-tron will be different, however. While drivers of the electric SUV will be able to use ChargePoint, EVgo, and other third-party chargers, Audi is pushing Electrify America as its network of choice. The choice is no accident, either.

That’s because, while it may not have Volkswagen Group branding, Electrify America certainly has a lot of its money. In fact, the charging company was formed as part of Volkswagen’s mea-culpa over “dieselgate,: when the automaker group was found to be using so-called “defeat devices” to mislead emissions testing on diesel cars. One part of its court settlement was to invest significantly in promoting zero emission vehicles.

As a result, Volkswagen is investing $2bn into a ten year plan to build out infrastructure and awareness for such cars. $800m of that has been earmarked for California, with the remaining $1.2bn shared across the other US states. The first cycle of investment will go into a network of EV chargers.

Right now, the goal is to have nearly 500 fast-charging sites by July 2019, spread across 40 states and in 17 metropolitan areas. California alone will have 160 ultra-fast sites. Over 2,000 chargers will be located an average of 70 miles apart on highways across America. 2019 e-tron buyers will get 1,000 kWh of charging credits, the equivalent of more than 2,000 miles of driving.

Electrify America may have been started with Volkswagen cash, mind, but it’s just as happy to take Tesla owners’ money too. In a boon to Model 3, Model S, and Model X drivers, Electrify America’s locations will be compatible using the CHAdeMO adapter the automaker sells.

Although Tesla used to offer free Supercharger access with the purchase of its cars, that deal has become less generous over time. Now, Model S and Model X buyers get 400 kilowatt-hour (kWh) of Supercharger credits each year, though Model 3 buyers do not. Anything beyond that, there’s a charge. In most states that’s per kWh, though some charge per minute, with rates varying by location and sometimes by charging speed. 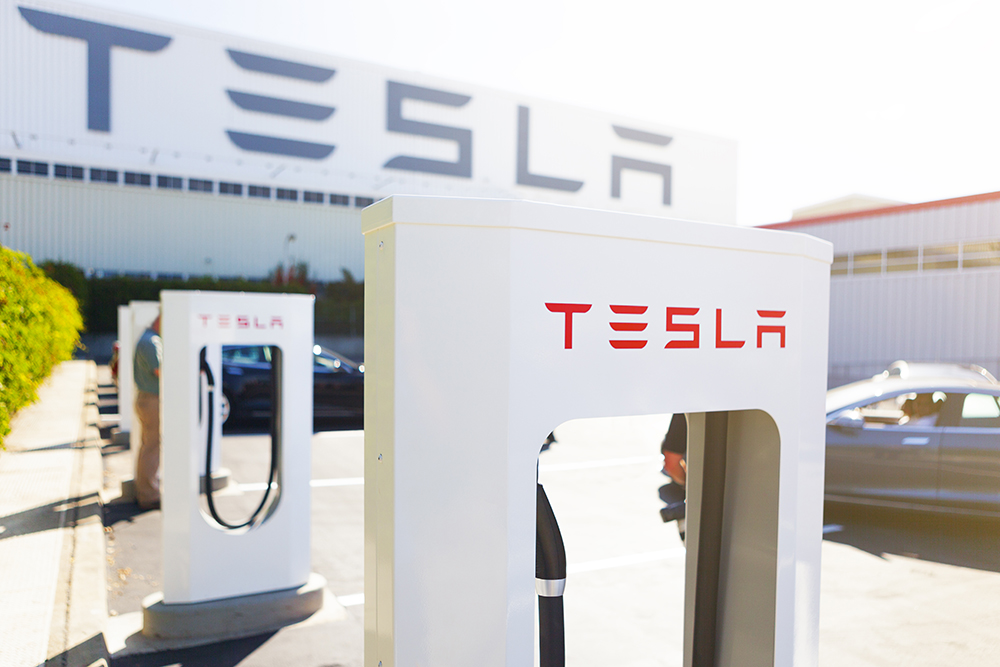 Electrify America’s fees, meanwhile, will all be per minute. The company charges a $1 session fee, and then either $0.30 or $0.35 per minute, location depending. That’s often more expensive than Tesla’s time-based Supercharger fees, though it’s worth noting that Electrify America’s chargers will support much higher rates of charging.

Currently, Tesla’s Superchargers typically deliver around 120 kW at most, with each charging post usually having two connectors and a maximum 150 kW to share between them. Electrify America, however, is installing 350 kW chargers. Now, not every EV will be able to take advantage of that rate – the 2019 e-tron is compatible with up to 150 kW charging, for example, though the upcoming Audi e-tron GT will support 350 kW, as will Porsche’s Taycan – and the charger and vehicle will automatically negotiate the best possible rate based on what each can support.

What may make the difference for Tesla owners is when it comes to sharing. If two cars are plugged into the same Supercharger post, they’ll share the overall power between them. The first car plugged in usually gets priority; the second makes do with what power is left over, up to that 150 kW total. Electrify America’s 350 kW ceiling, though, means there’s less chance of sharing. 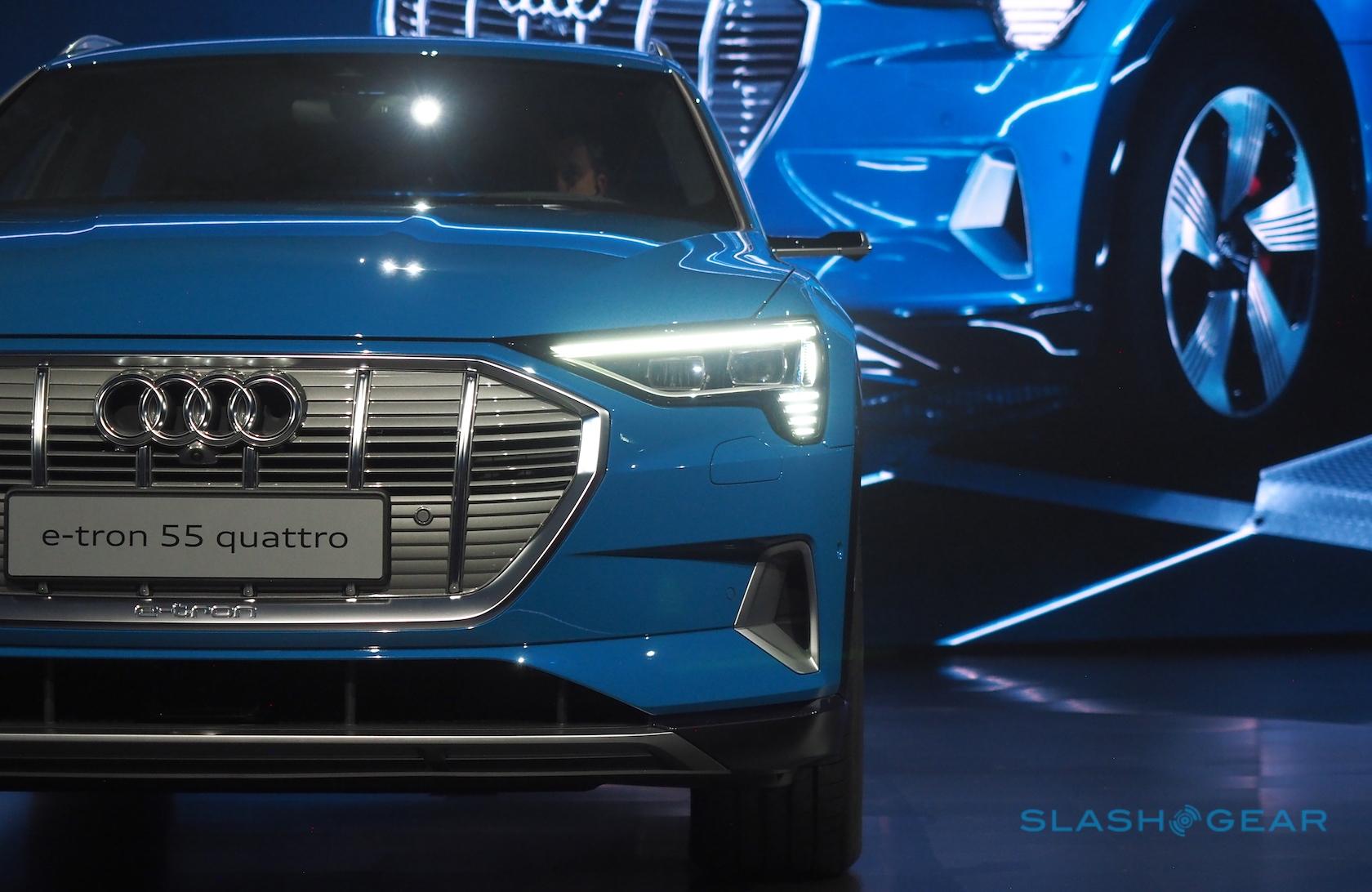 In all, it’s a confluence of factors that may well make for rich charger pickings for Tesla drivers over the next few years. Yes, the automaker has its own Supercharger enhancement roadmap, but Electrify America’s aggressive schedule will undoubtedly help fill in the gaps – and, indeed, relieve some of the pressure as more and more Model 3 drivers start to take advantage of Supercharger locations.

It’ll take a little time for that to pan out, of course. For the moment, indeed, Electrify America doesn’t have a single charging station open in California. Still, VW, Audi, and Porsche’s ambitious electrification goals – and their need, and financing, for the infrastructure to support those aims – could prove unexpectedly beneficial for Tesla drivers, along with those behind the wheels of other electric vehicles.