Audi has revealed its latest vision of electrification, the Audi A6 e-tron Concept, and once again we’re seeing a very thinly-veiled tease of an important production model in the not-too-distant future. Debuting at the 2021 Shanghai Motor Show today, the A6 e-tron borrows a name and a footprint from a mainstay of Audi’s traditional line-up, but the rest is thoroughly modern.

The badge may be the same, but the A6 e-tron is a long way from the A6 on the road today. It’s a Sportback, in Audi styling terms, with a long hatchback rear that helps both aesthetically and with aerodynamics. We can probably expect to see more of that in electric luxury vehicles generally; Mercedes-Benz’s recently announced EQS follows the same strategy. 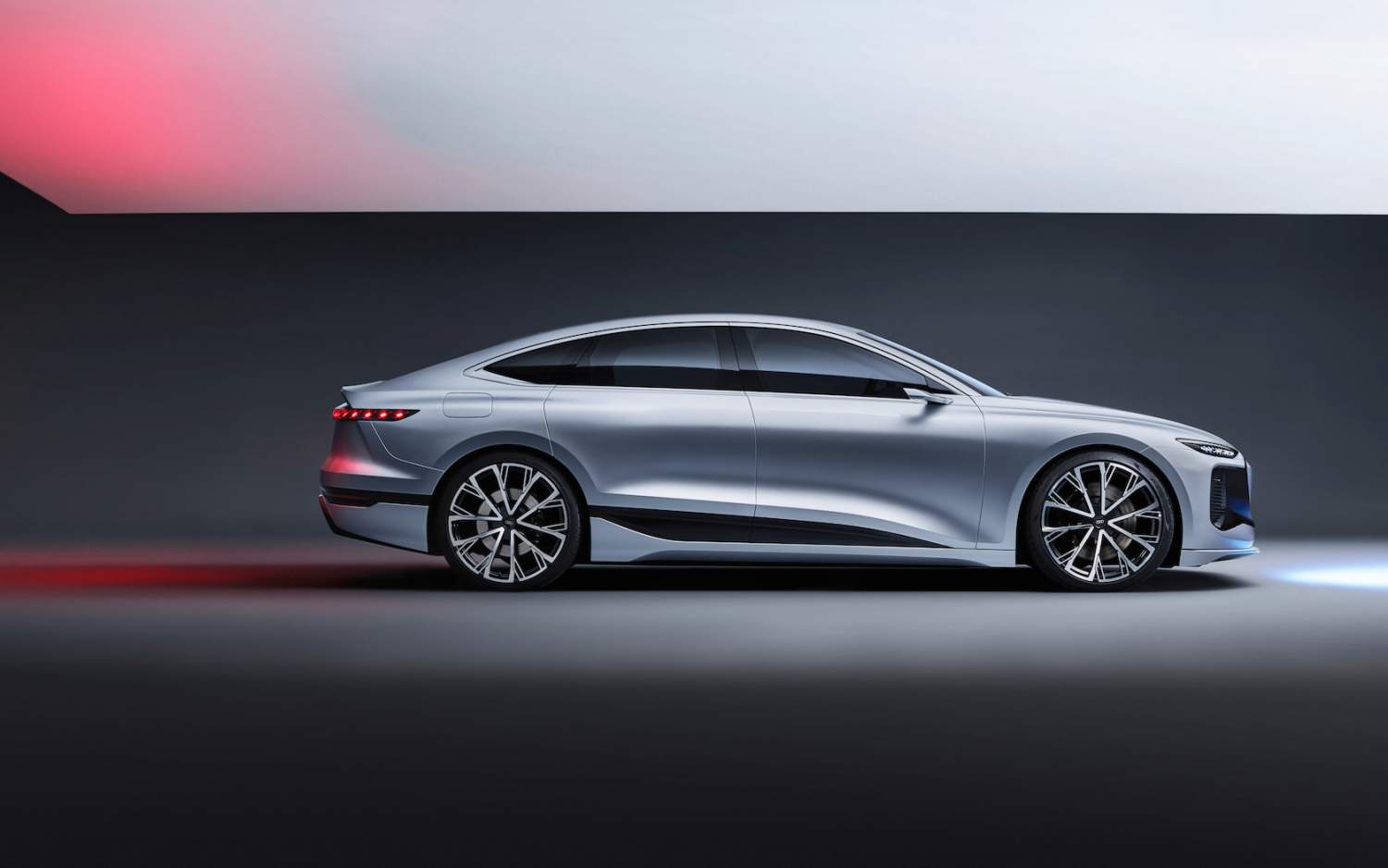 The A6 e-tron Concept won’t be quite as slippery as the EQS – Audi says it expects a 0.22 coefficient of drag, compared to the Mercedes’ 0.20 Cd – but airflow’s loss is design’s gain. The Audi avoids looking entirely like a river-shaped rock painted to look like a car, with its sculpted sides and textured lower front fascia.

22-inch wheels and short overhangs give it a meaty, planted profile, while the front uses Audi’s distinctive new grille design for EVs. Enclosed, since it’s not needed for ventilation in the same way an internal combustion car would require, the Singleframe is flanked by flat, stretched-out headlamps using the company’s Digital Matrix LED technology. 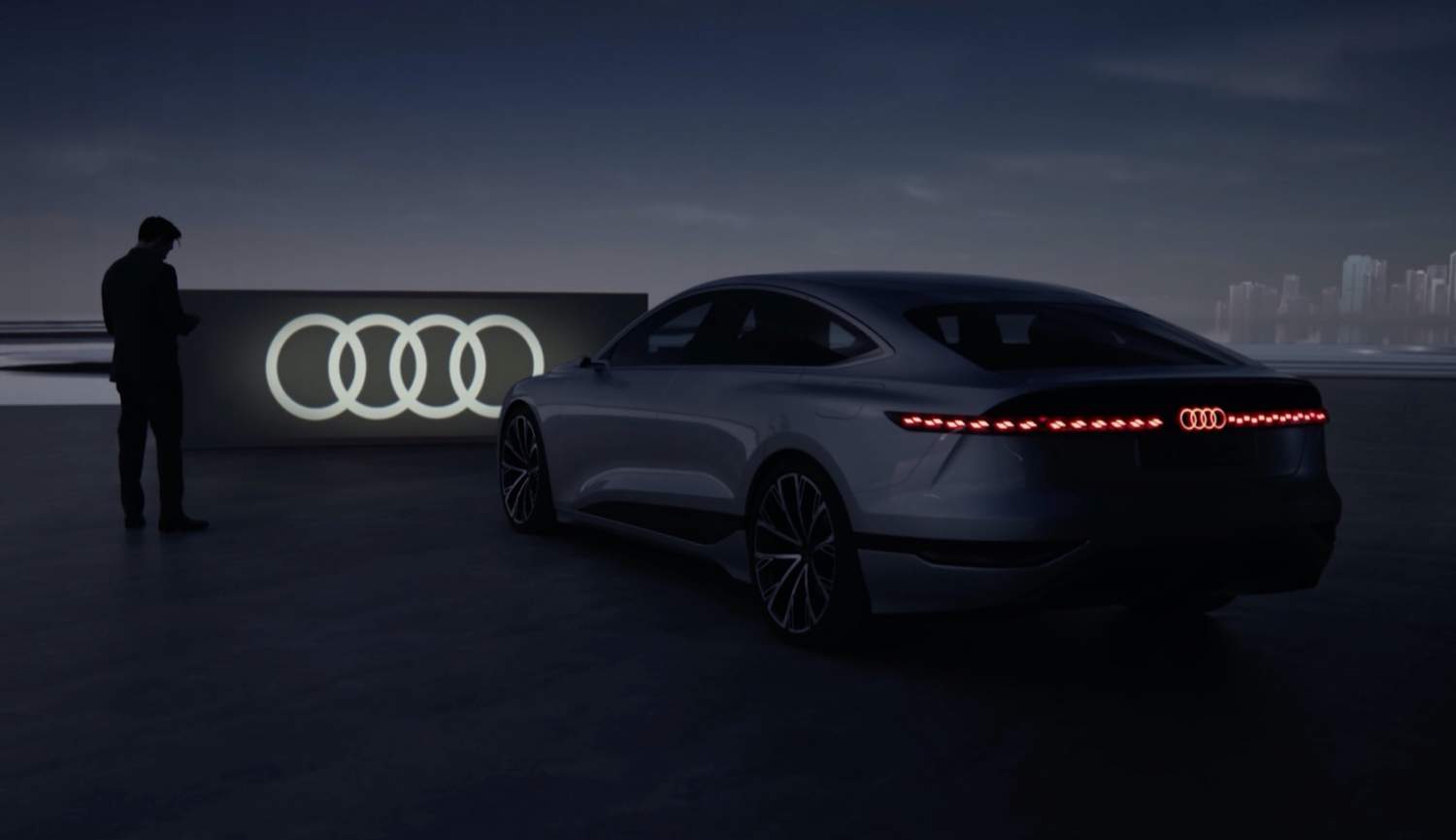 Lighting generally is a big element to the A6 e-tron Concept. At the front, not only can the precisely-controlled headlamp segments automatically avoid dazzling oncoming traffic, but they can even project a video game onto a wall to be played by the people inside. Audi’s designers came up with the game themselves, and it’s controlled via a smartphone. 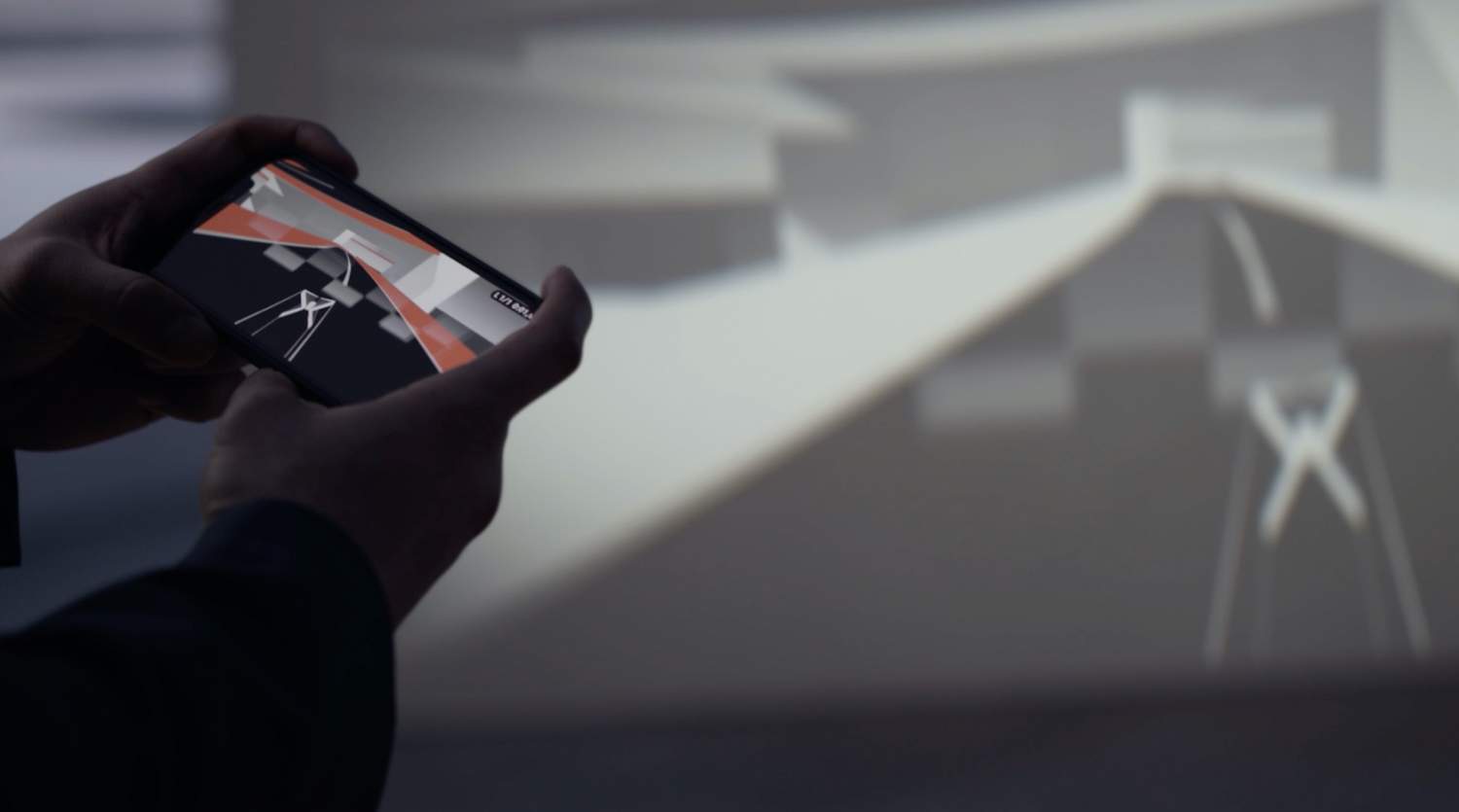 At the rear, there’s a trunk-spanning OLED strip that can be customized into different light signatures and animations. More LED projectors around the EV can project onto the roadway, laying out turn signal indicators, warning symbols about an imminent door opening, and even text onto the ground to keep pedestrians and other road users aware of what’s happening. 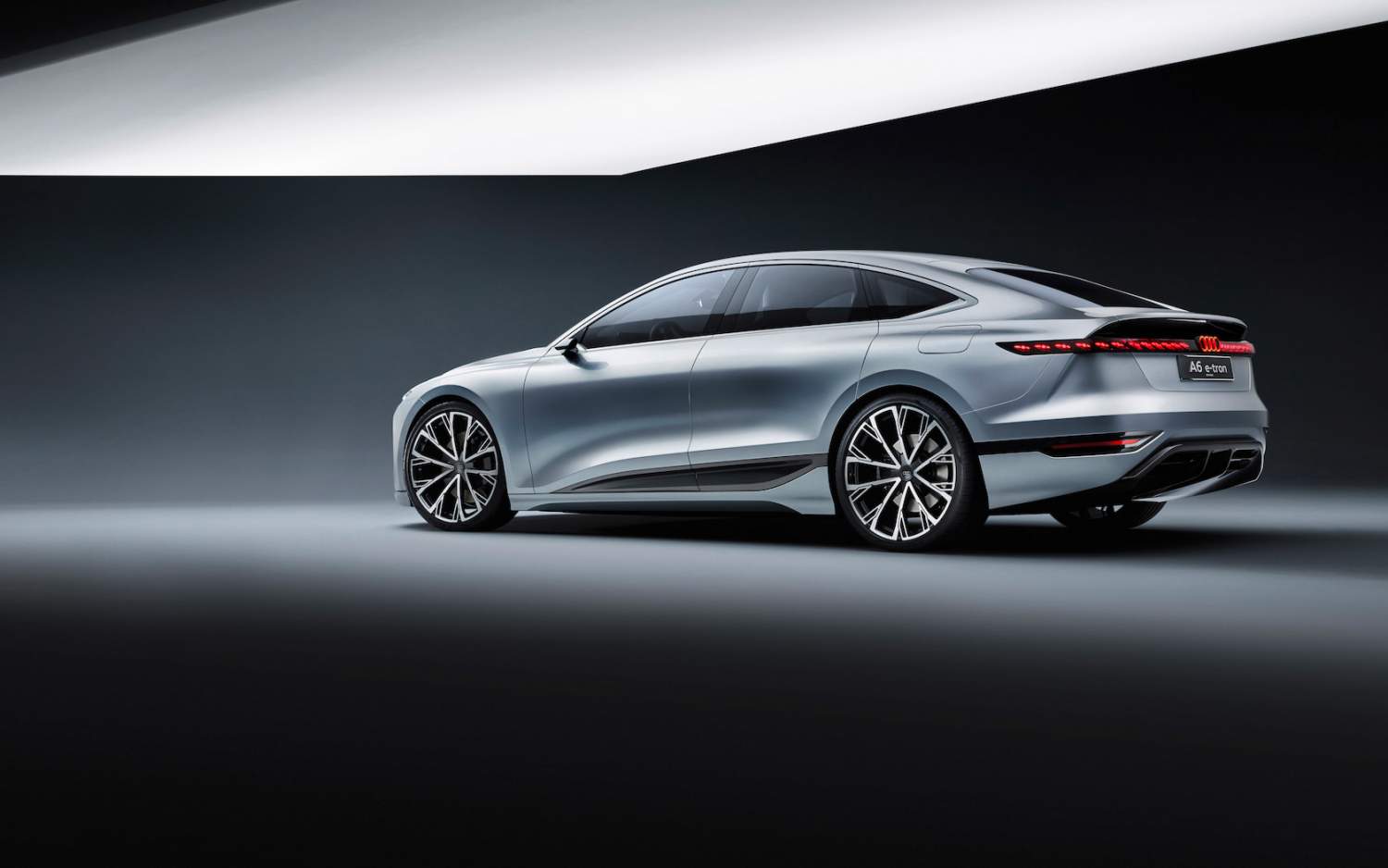 As for the interior… well, that’s a work-in-progress, by which I mean Audi hasn’t actually designed it yet. Having seen the fairly consistent cabin design in the e-tron SUV, e-tron Sportback, and the e-tron GT, though, it’s not too hard to imagine Audi’s dual-touchscreen dashboard slotting inside this particular model. However expect more internal space, the automaker promises, than in its gas sedans thanks to less mechanical intrusion. 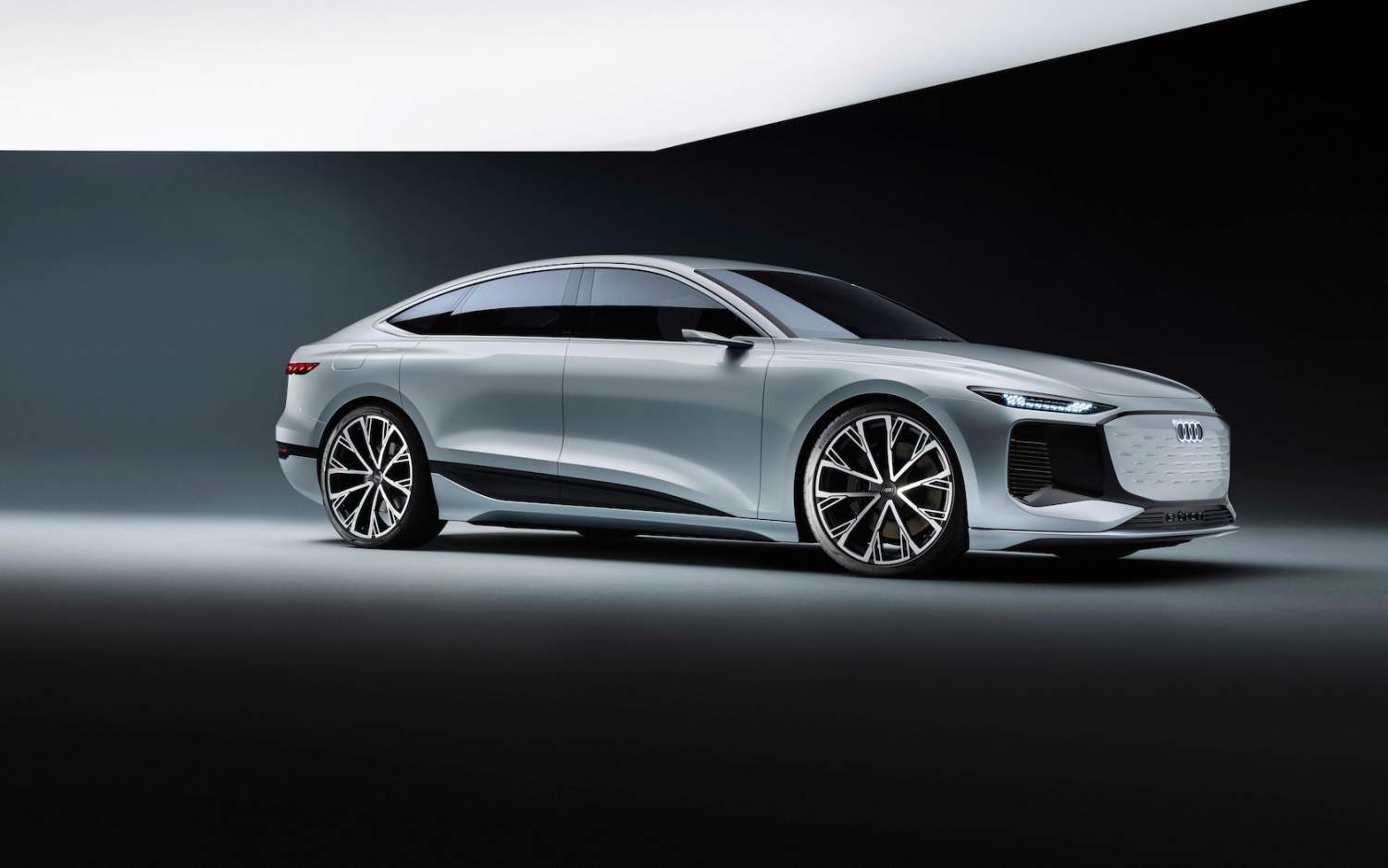 It’s the same size as the current A6 sedan – just over 16 feet long, and about 6.5 feet wide – but that’s about where the similarities end. Indeed the A6 shares pretty much a name alone: it’s based on the MLB platform. Much in the same way, though the A6 e-tron Concept may be a Sportback, Audi doesn’t intend it to eclipse the A7 Sportback. Instead, there could be alternative body styles for the e-tron version down the line.

Underneath the A6 e-tron Concept, the PPE platform

Where the recently-announced Q4 e-tron uses VW Group’s MEB platform for all-electric vehicles, the A6 e-tron Concept relies on the PPE, or Premium Platform Electric, 800v architecture. Co-developed by Audi and Porsche, it’s focused on luxury performance electric models, rather than making a specific play for the mainstream like MEB. 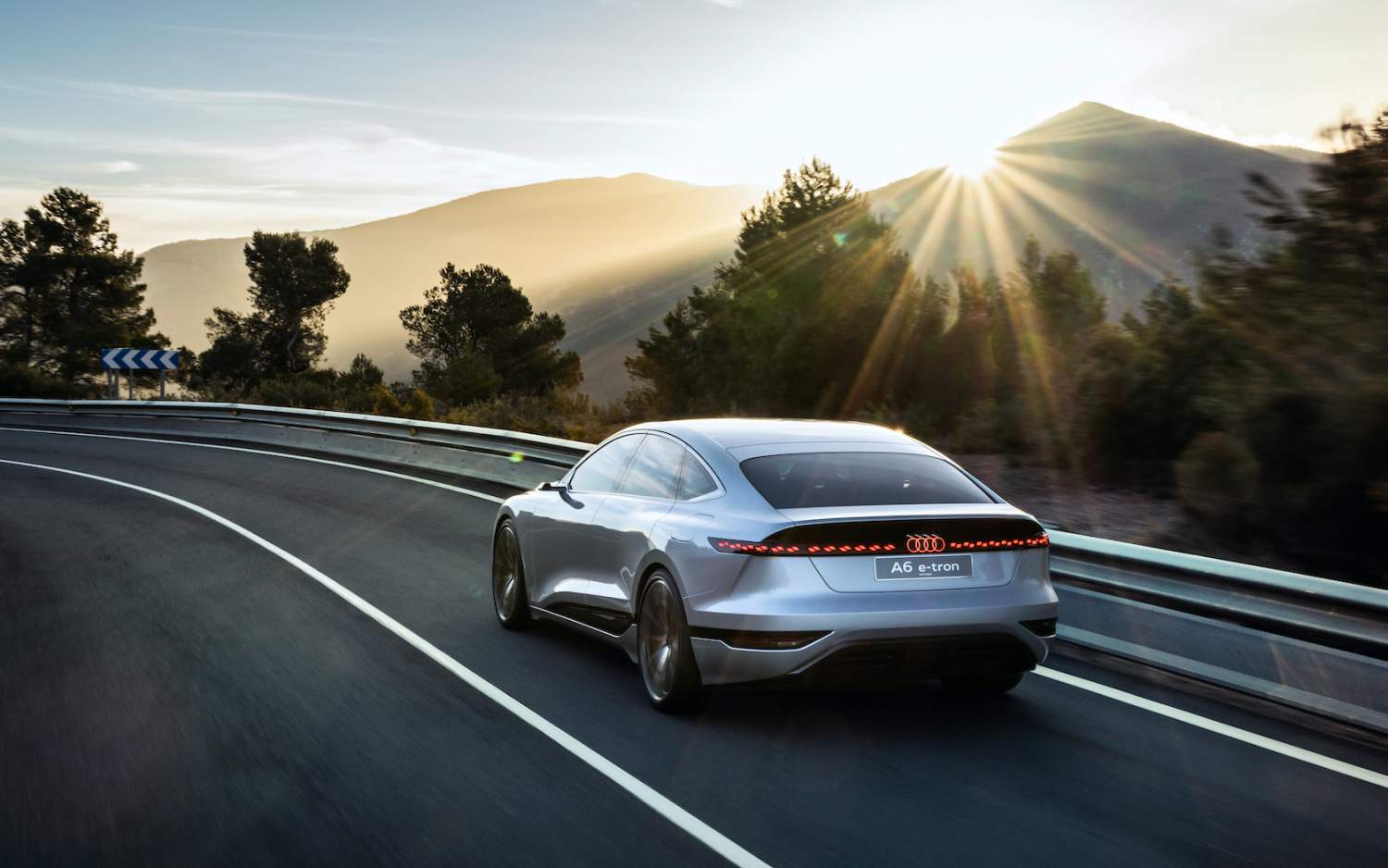 PPE is a flexible setup, though currently Audi is saying it has both rear-wheel drive single-motor and all-wheel drive e-quattro dual-motor variants in mind. It won’t be baited into talking about a tri-motor A6 e-tron, even though that’s a configuration we’ve seen Tesla and others capitalize on.

Given the difference in ride height between an SUV and a low-slung sedan like the A6 e-tron Concept, you’d be forgiven for wondering how the battery has been designed. PPE fits its roughly 100 kWh pack into the wheelbase, giving flexibility in height but also helping keep the overhangs short. 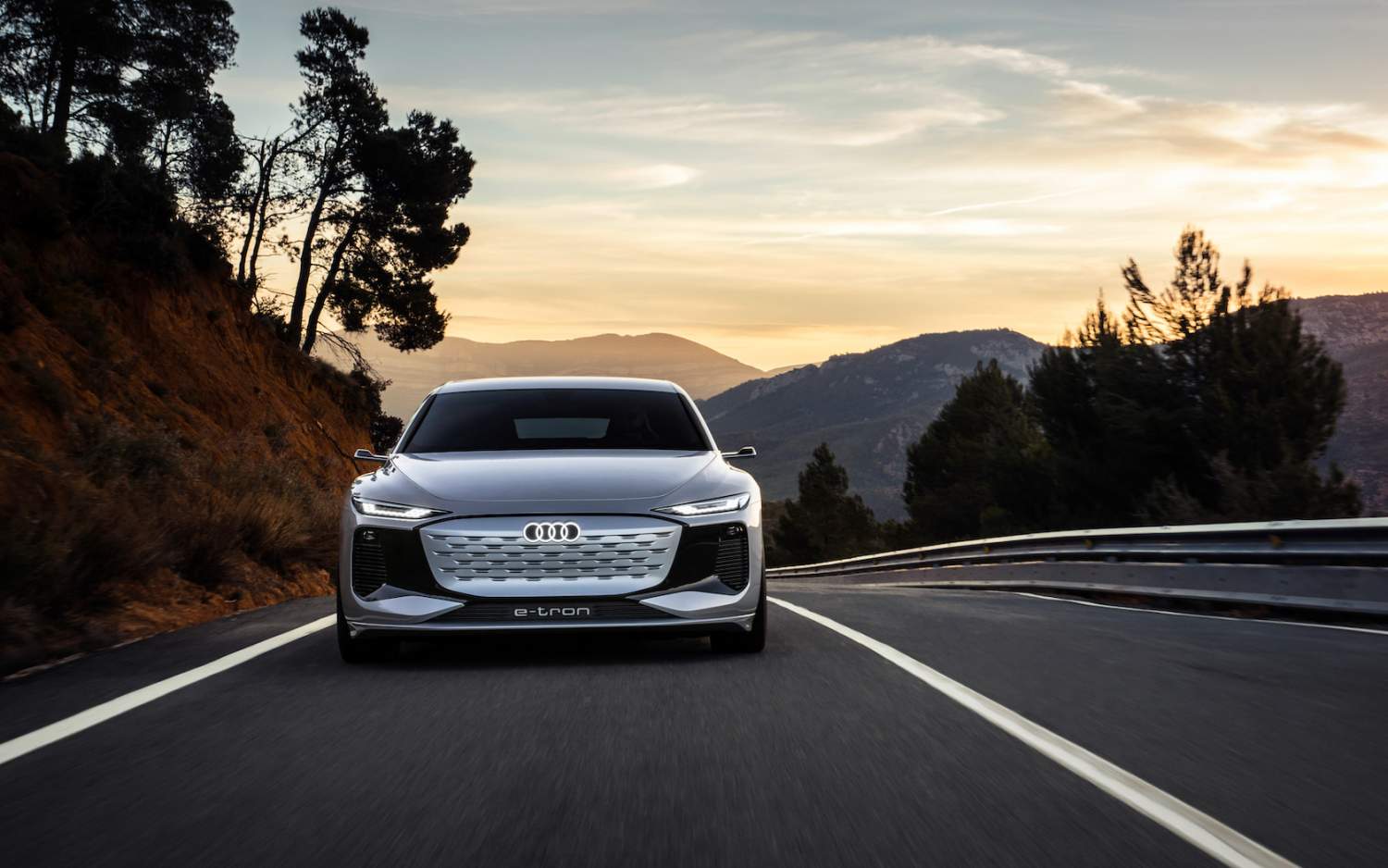 For this particular concept, Audi has oped for a five-link axle at the front and multi-link at the rear, with air suspension using adaptive dampers. With two electric motors, you’re looking at 350 kW (469 hp) and 800 Nm (590 lb-ft) of torque. 0-62 mph, the automaker claims, comes in “well under four seconds”; even more frugal, range-focused variants should do it in under 7 seconds.

On the WLTP cycle, Audi says, the A6 e-tron Concept could do more than 435 miles on a charge; expect markedly less on the EPA’s test. When it comes time to plug in, there’s up to 270 kW DC fast charging support. Find a suitably-potent charger and you’re looking at more than 180 miles of range added in just ten minutes.

Will Audi make a production A6 e-tron?

Automakers love concepts, but the bigger question is whether the A6 e-tron Concept we see here will ever spawn a production model. The good news is that, while most of the nitty-gritty details are still to be decided, Audi is saying that it plans to launch an EV like this. 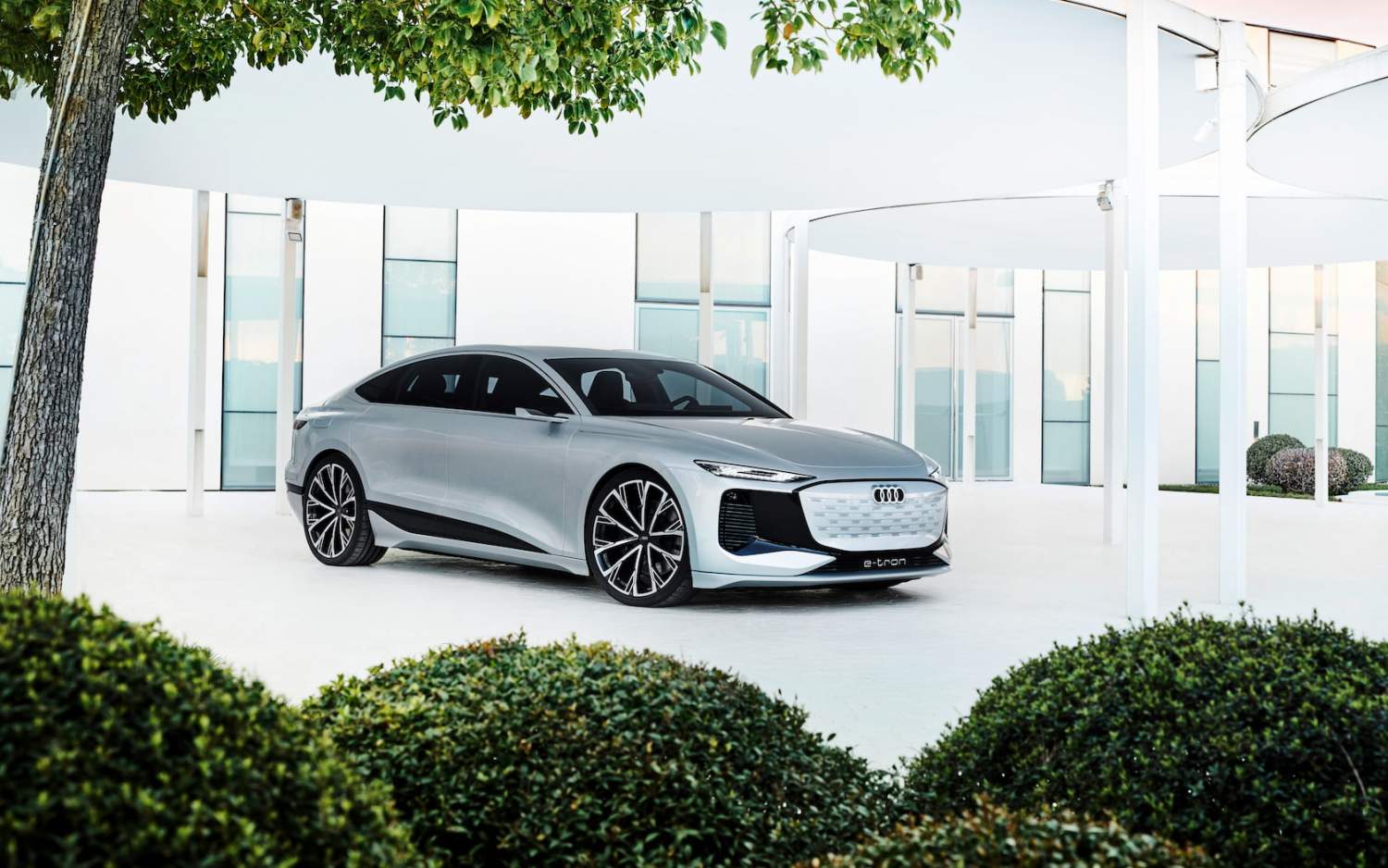 The production Audi A6 e-tron is expected to debut in around two years time, perhaps a little longer, the automaker confirms. It’ll be the company’s second PPE-based model, following the Audi Q6 all-electric SUV. That model is on schedule for an unveil at the end of 2022, with deliveries sometime in 2023.

As for how close the production car will be to this concept, again, Audi isn’t giving absolute specifics. Still, it’s “very close” according to exterior design chief Wolf Seebers. “It is accentuated, but it’s very close to serial production” he teases, suggesting what we see here is about 95-percent of the production car. 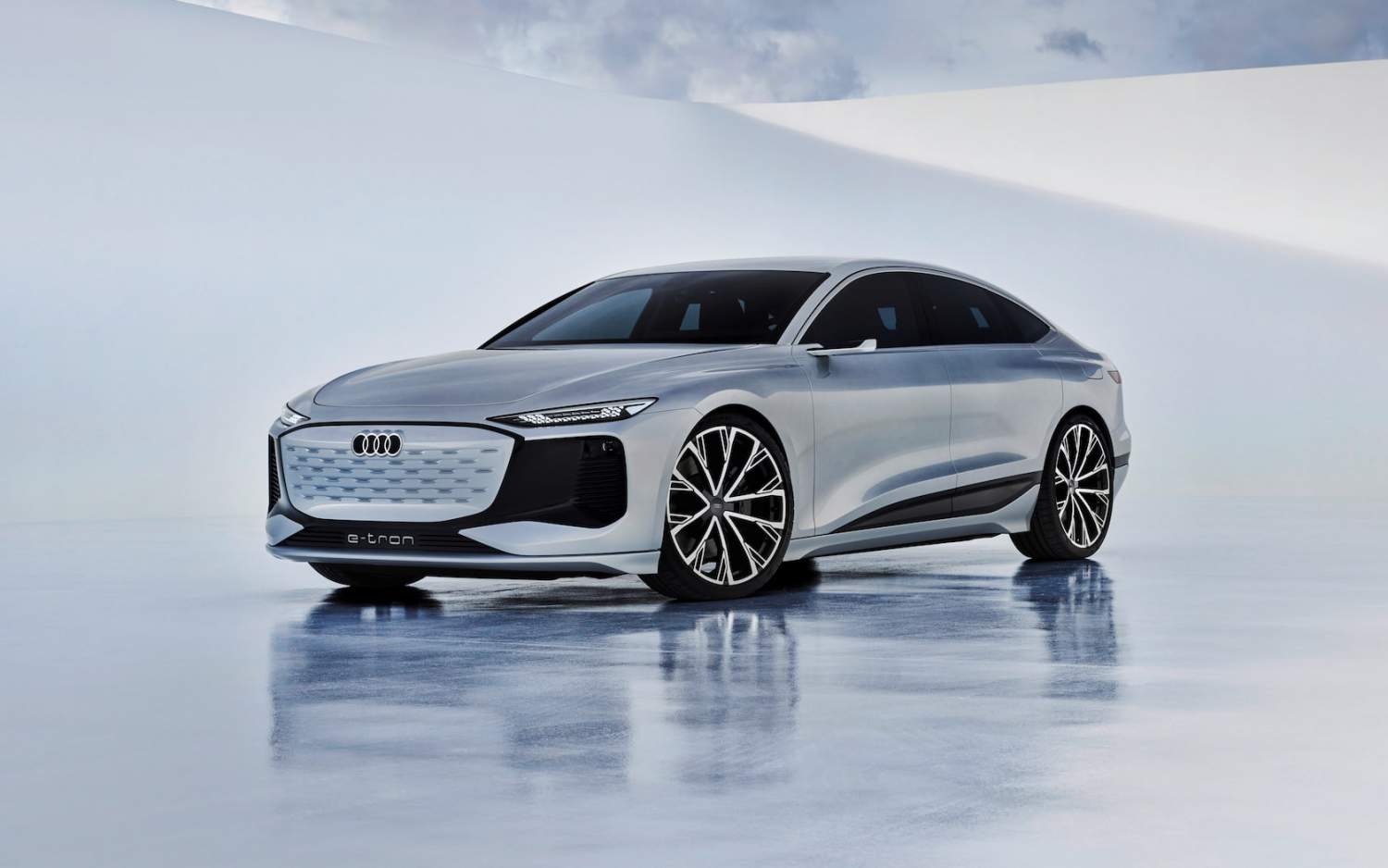 Like with the Audi e-tron GT concept and its transition to production-ready model, the door handles – or their absence on the concept – will be an obvious casualty along the A6 e-tron Concept’s path to market. Those side-mirror replacing cameras almost certainly won’t make it to the US either, though we can blame myopic local regulations for that. 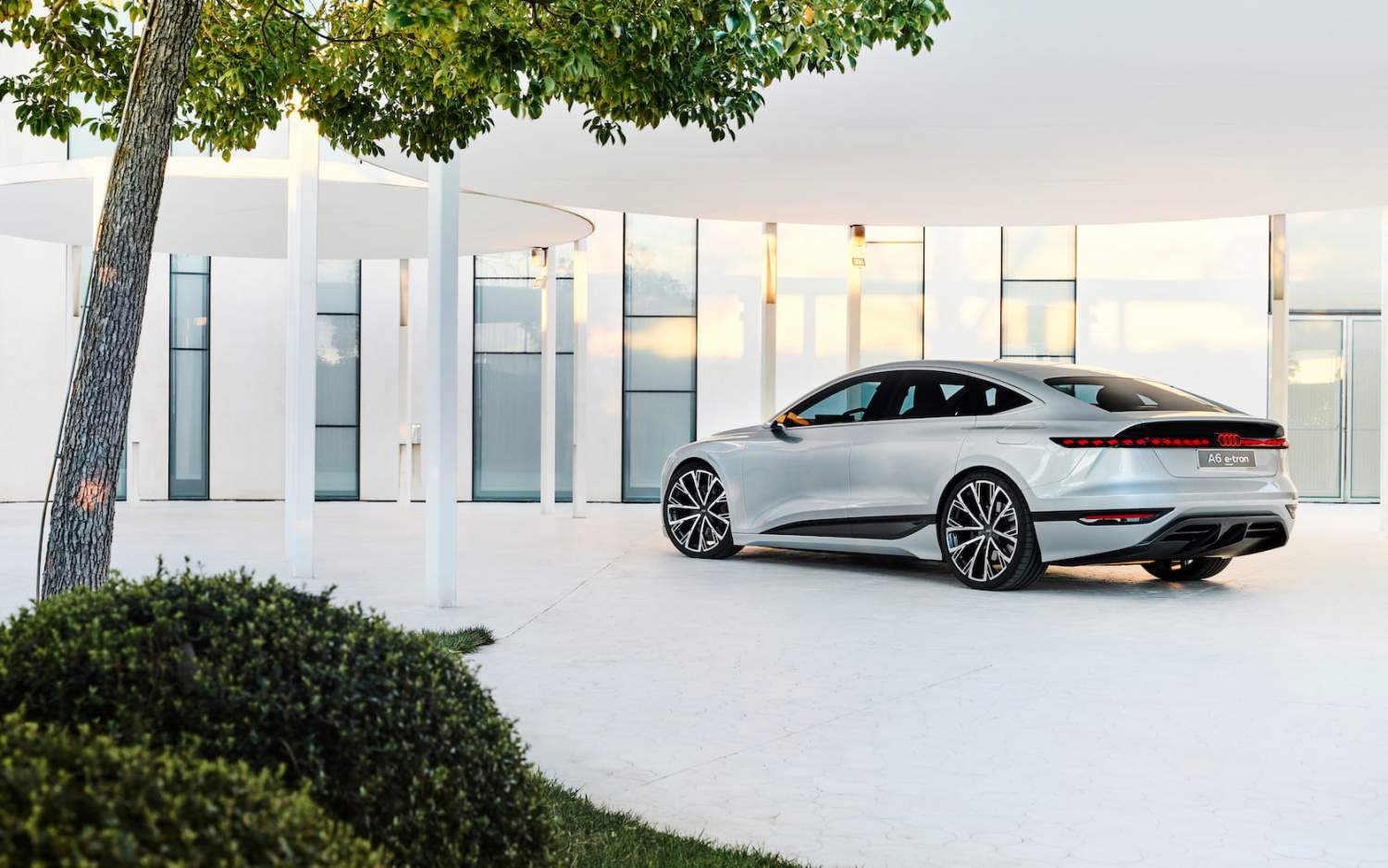 Beyond the production A6 e-tron, though, Audi has big plans for PPE. Though it’ll likely keep using MEB for more affordable models, the platform co-developed with Porsche will go on to underpin “an unprecedented range” including SUVs, crossovers, and more low-slung models like the A6 e-tron. It’ll also feature in both smaller and larger models from the segments either-side, the automaker says, tapping economy of scale to help shrink the lingering price gap between battery-electric and internal-combustion models. Even if this particular Audi concept doesn’t catch your eye, then, that promise alone should be worth the Auto Shanghai 2021 fanfare.