Audi may not have shown off the production e-tron GT yet, but having flipped the design process it turns out we’ve already seen what the automaker has been up to with its electric Gran Turismo flagship. Back in 2018, Audi turned heads when it showed off the e-tron GT Concept, a deeply covetable four-door coupe that promised luxury and zero emissions. Little did we know, however, just exactly what we were seeing at the time.

Usually, there’s a fairly predictable – and disappointing – path from concept car to production model. For those show cars lucky enough to be granted the green-light for retail, there’s typically a dulling of the sharp design as the cruel realties of manufacturing and economics come to bear. 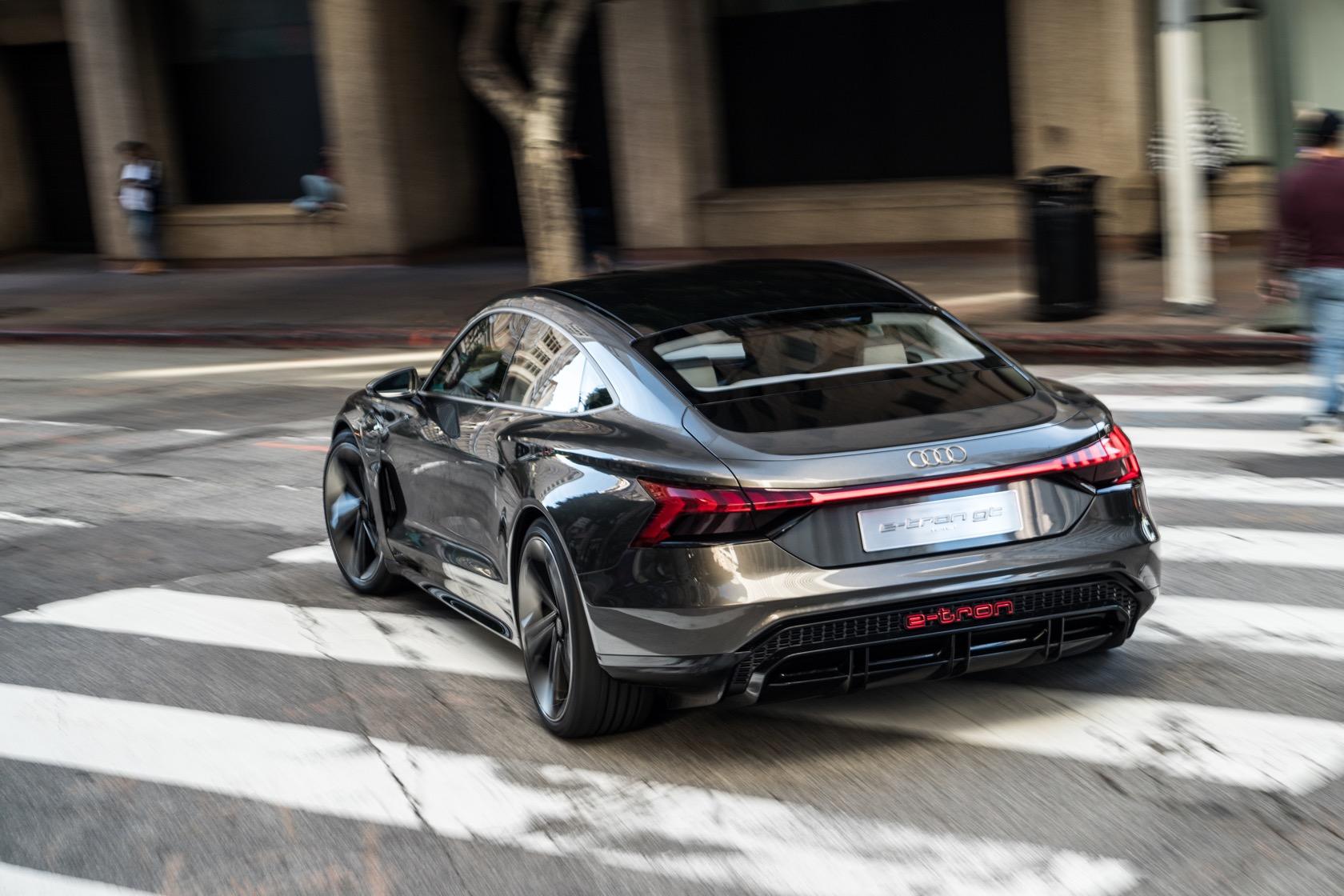 It meant that, for all Audi’s big talk of the e-tron GT being its all-electric flagship, we were preparing ourselves for potential disappointment nonetheless. Even when we had a chance to climb behind the wheel of the concept car, the knowledge that Audi would likely be forced to make aesthetic compromises lingered.

Consider us surprised to discover, then, that the Audi e-tron GT was actually a bait-and-switch. “The show car really has just been the production car,” Marc Lichte, head of Audi Design, explains. Turns out, when the automaker needed a concept car, it had already designed the version that would one day roll off the production line.

Instead, it took a sheet-metal pre-production e-tron GT body, and prepped it for its premiere at the LA Auto Show 2018. When the silk sheet came off, there were only two differences from the four-door coupe Lichte and his team had come up with for the factory.

“We changed only two details on the show car,” the design chief explains. “We took off the door handles … and the illuminated e-tron badges that were on the show car, these will not be going into production.” 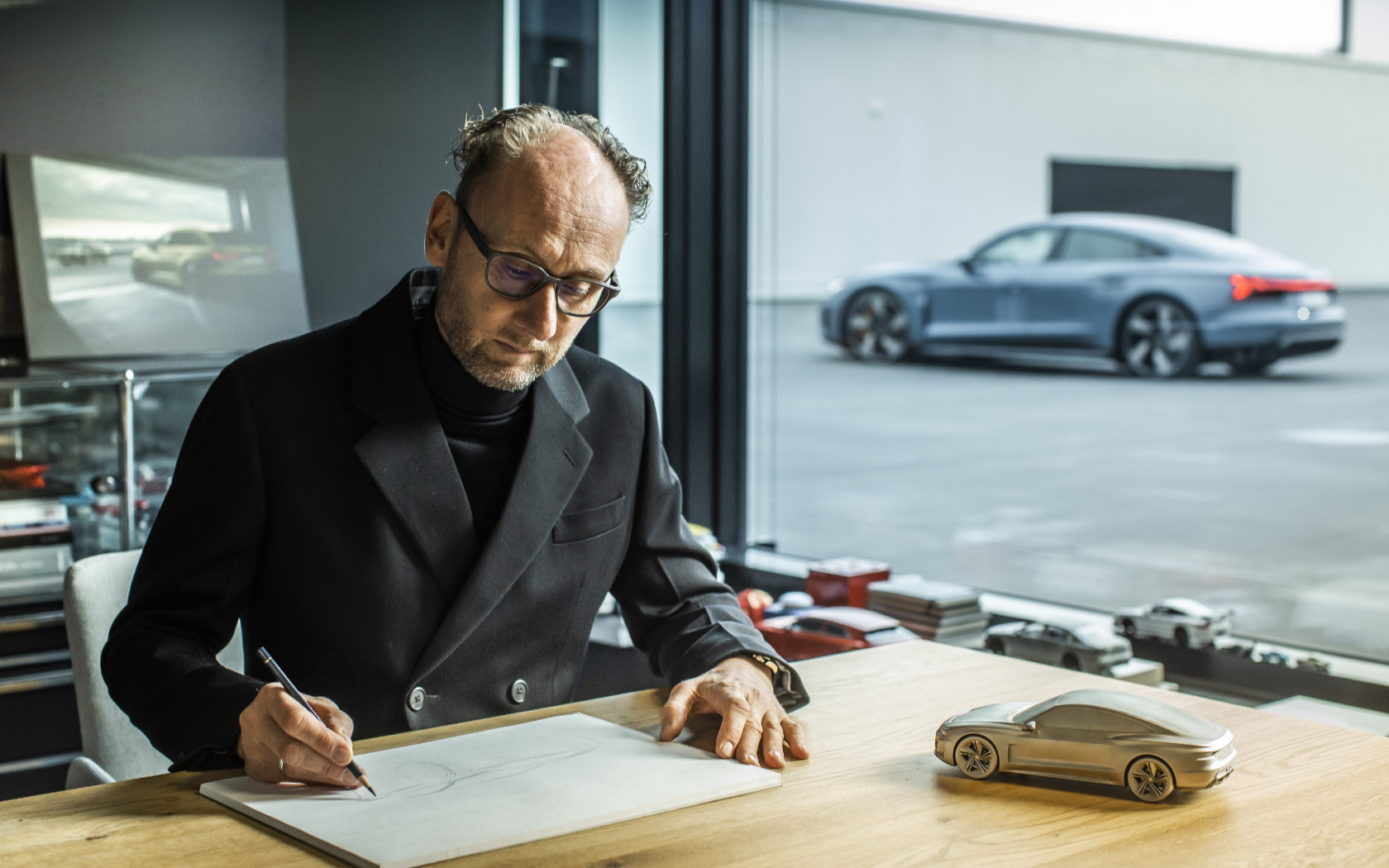 Even with handles, the e-tron GT is going to turn heads. What pictures don’t quite emphasize is just how low the EV is: its roofline is almost 3-inches lower than that of the A7, a car that’s hardly known for being tall itself. While its big wheels, short overhangs, and minimal greenhouse wrap around an electric platform developed by Porsche, the Audi manages to be even more dramatic than its Taycan cousin is.

According to Lichte, that’s a direct result of the electrification. The modular battery, for example, allows Audi’s engineers to design footwells into the power-pack slung into the e-tron GT’s lengthy wheelbase. Rear seat passengers, therefore, should get sufficient legroom even for adults, despite the exterior proportions.

Perhaps even more surprising, the elegant cabin will be close to what the concept car previewed. “The interior is very dramatic,” Lichte says, estimating that the production car is around 95-percent what we saw in the LA show car. “As you know the HMI is very well known … the whole dashboard is driver-oriented.” 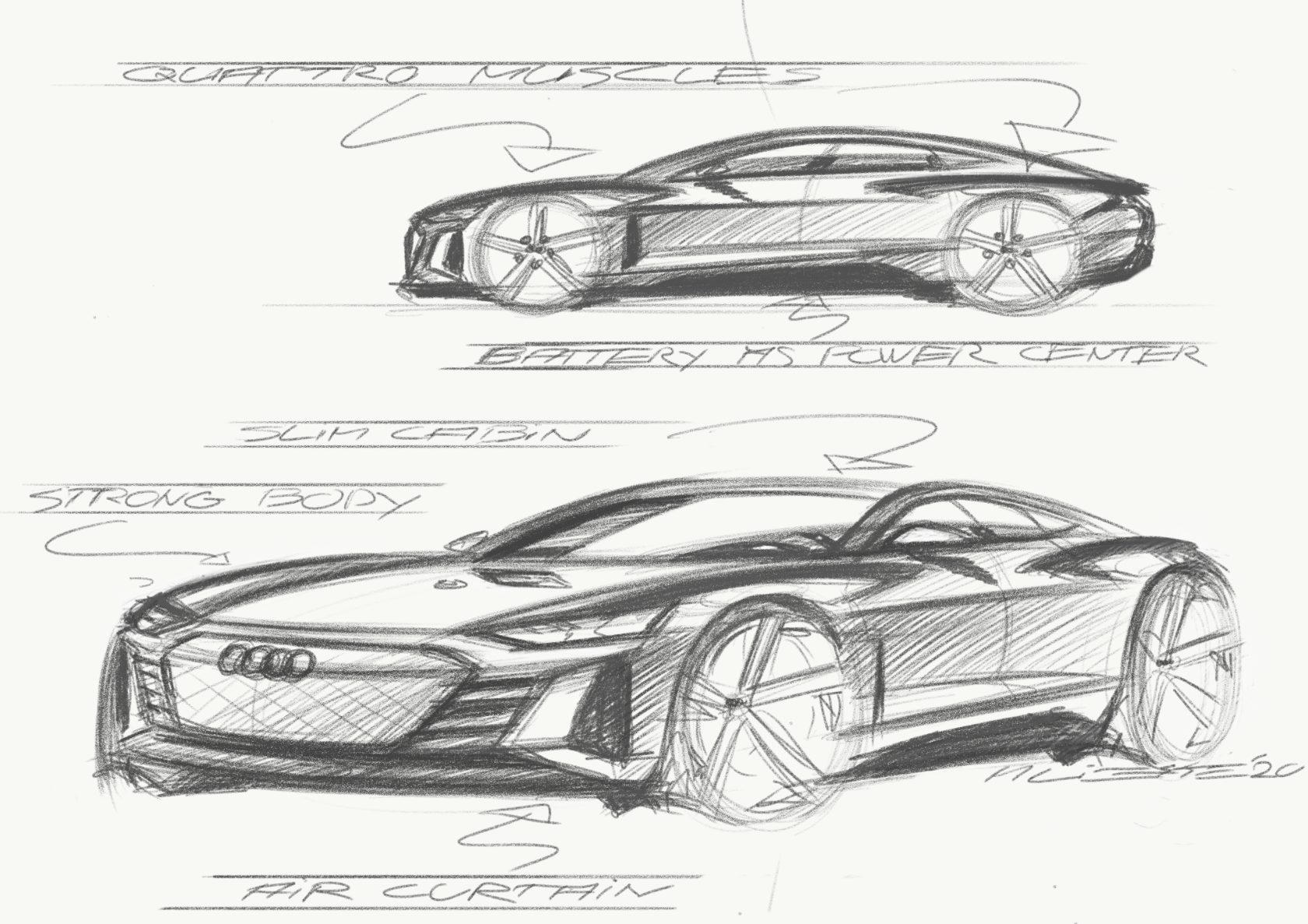 What’s telling is that the car that will be Audi’s de-facto flagship for electrification isn’t a coupe or an SUV, but closer to a sedan. As Lichte tells it, that’s a combination of practicality and design intent.

“We have many ideas for an electric R8. Nothing is finally decided, but we have many ideas,” he says, referring to Audi’s coupe and roadster sports car. “The reason why we came up with this four door concept is that it’s a package. It’s no secret that we share this package with Porsche, so that’s why it’s a four-seater. We could say, okay, let’s make it a two-door, but as you know it’s a much smaller segment.” 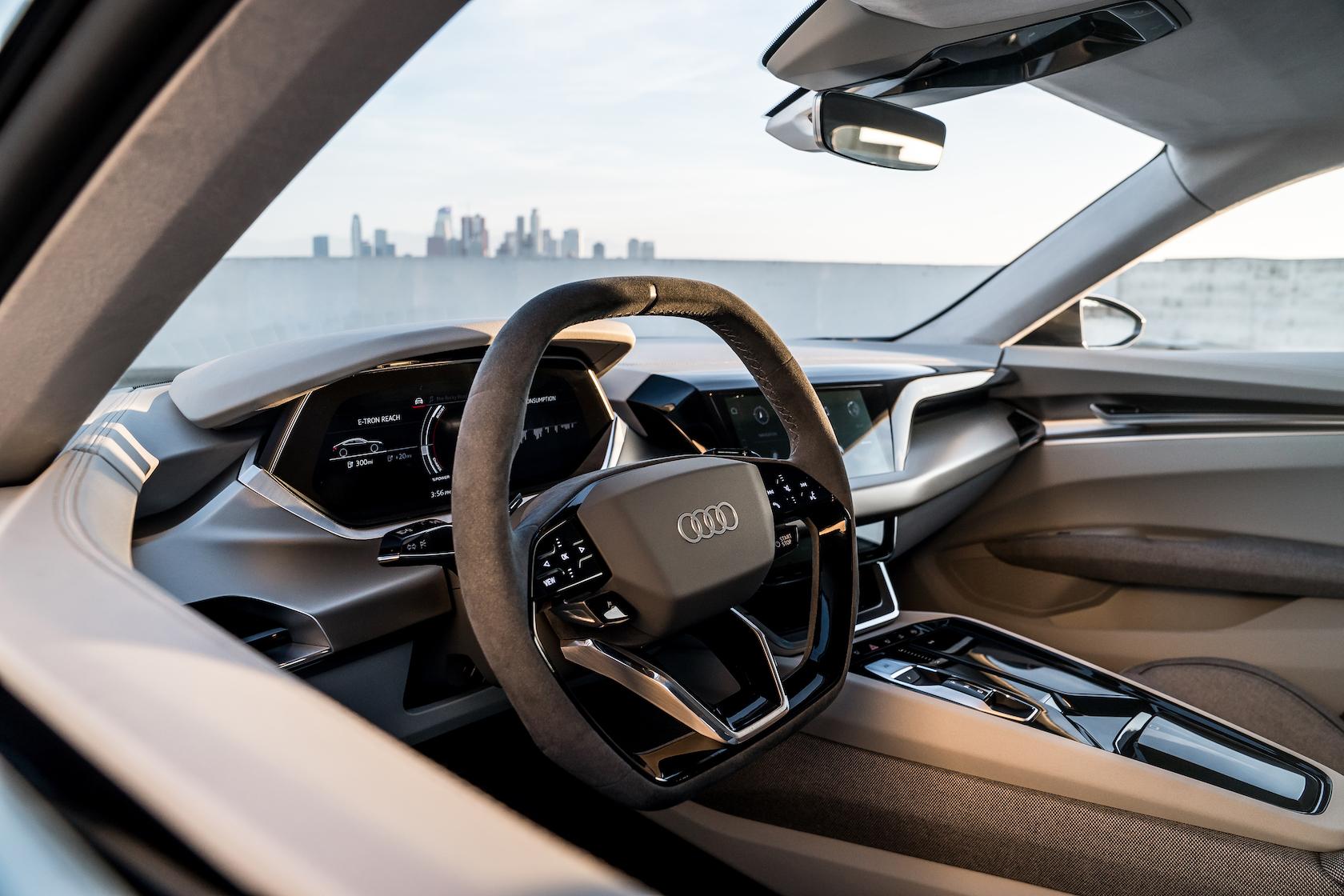 “We have a clear strategy,” the head of design insists. “Don’t forget, the SUV segment is getting bigger and bigger. But on the other hand, there’s still attractive low-floor sedans, or Sportbacks, there’s a demand for cars like this as well. I would say at Audi it’s about half and half. At Audi we’ll will have a small brother, in about two years time, which will be a Sportback as well.”

While we’ll have to wait to see what, exactly, that will look like – our assumption is that its relationship to the e-tron GT will be much as the Audi A5 is to the A7 – and indeed how the e-tron GT itself looks with door handles in situ, one thing Lichte is certain about. 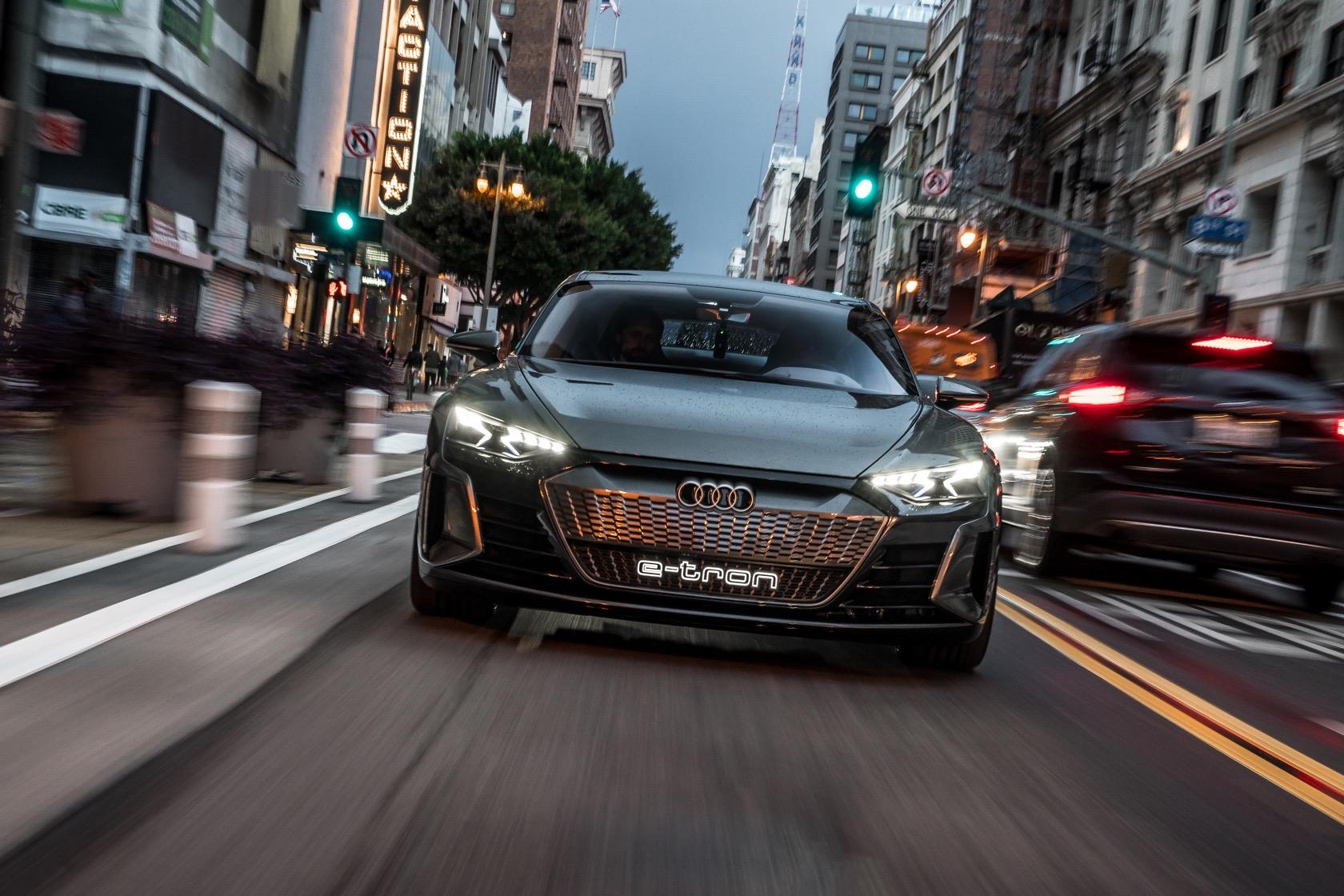 “Our approach is different from our competitors,” the designer says, mentioning no names. “They come up with – I would say – bizarre and strange design language.” Audi’s EVs, in contrast, should be the automaker’s most attractive cars, Lichte argues. “The basis for a good design are proportions, and these proportions are really awesome.”